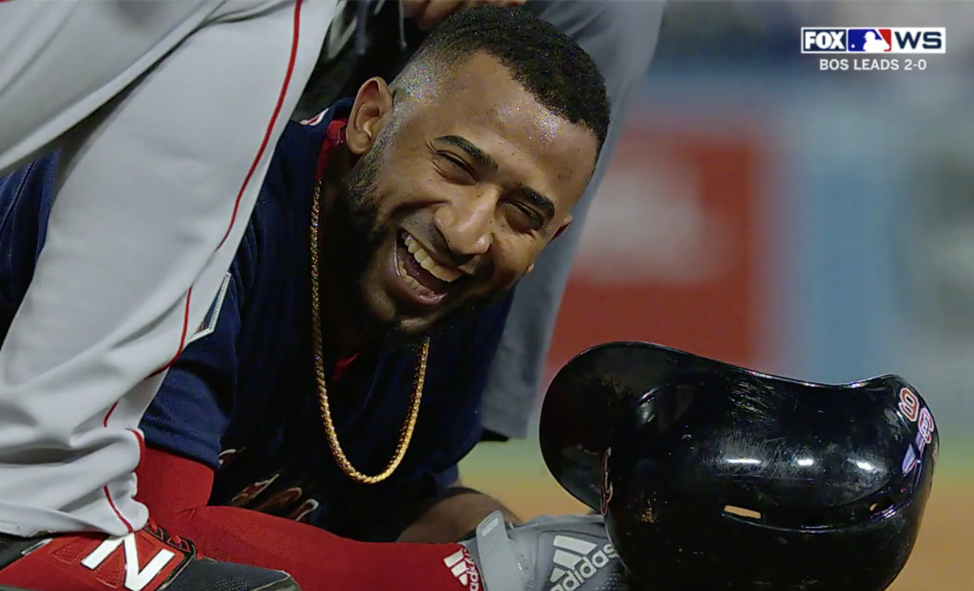 It is currently four in the morning as I write this, so there is no time to be cute. I realized this just now trying to come up with a wittier title than you just read. Something that would tie Eduardo Nunez and Nathan Eovaldi and the phrase “not enough” together. Nunez’s name has the initials N and E, like Eovaldi’s name and the phrase, but it’s in the wrong order, and ha ha ha that is not enough to work with ha ha ha.

I will never meet Eduardo Nunez and Nathan Eovaldi. I am not a Red Sox fan. Yet I feel like I let them down. Those sons of guns tried. They perhaps sacrificed some future part of their baseball careers to give their team a chance to have a commanding three games-to-zilch lead in the World Damn Series. They were pushed to the extreme in a record-shattering horror on a late October evening (and early morning) and pushed right back. But it was not enough.

The game lasted seven hours and 20 minutes. There is a long Google document I have where I copied and pasted all of the ridiculous records which were broken—I am inclined to just dump it here and call it a post, but that is called plagiarism, so let me cut to the chase.

Plenty of time for a lot of heroes to show themselves. The same goes for legends, and as we learned from The Sandlot, legends never die. Benjamin “Benny” Franklin Rodriguez is a Dodger at the end, and the Dodgers won this 18-inning “stupid experience,” so I’m guessing Walker Buehler, Cody Bellinger, and Max Muncy will be considered the legends in the end and become immortal, whereas Nunez and Eovaldi will simply be the heroes, remembered until the last remaining living person to have watched the game rooting for the Red Sox has passed on.

Or the Red Sox can come back from their 2-1 series lead and win the 2018 title, and they’ll be the legends, retroactively. But just in case they are not, I think it is only right to preserve their efforts.

Nunez always seems on the verge of literal collapse with ankle, knee, and hamstring injuries bugging him all year. He is important to the club, though, and you trust him enough with the glove, and he was healthy enough to make over 500 plate appearances this season, and oh right he hit a pinch-hit three-run home run in Game 1 of this World Series.

Nunez came in last night at the start of the second full baseball game within Game 3. After a Brock Holt walk to start the top of the 13th inning, Nunez was minding his own business when the baseball refused to leave him alone.

The umpire signaled safe, but Nunez was anything but. If it were anyone but Nunez and his documented injury woes, you would not be particularly paranoid to think he was milking the pain, even though it is silly to think Dave Roberts in the World Series would opt not to try to challenge batter’s interference out of the goodness of his heart. No interference was called during the injury timeout, so Holt was standing on second base and then was able to score when Nunez made contact and Johnny Hustled/Jake Taylored his heart out.

He got a little too familiar with the enemy’s turf for awhile. Again. 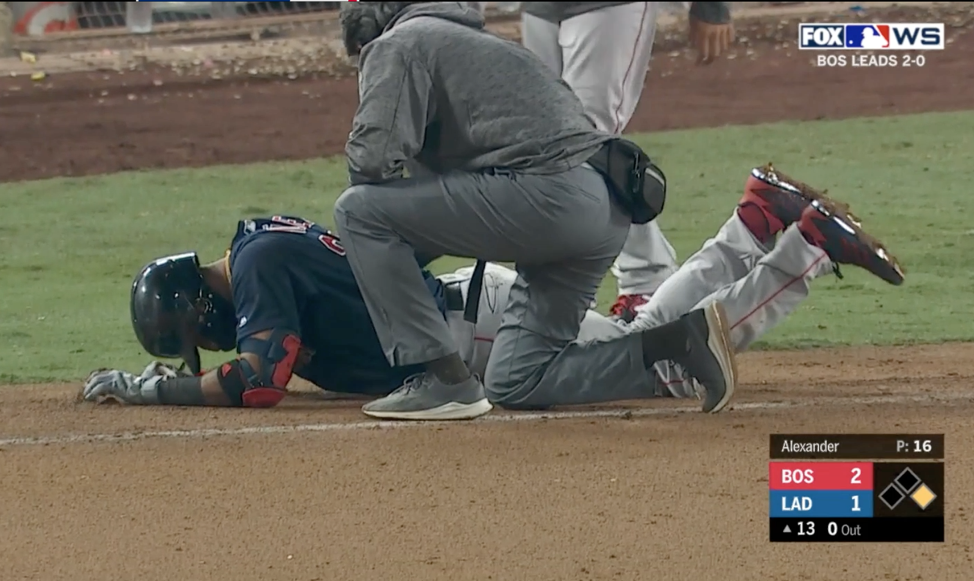 See, it was no ruse.

Nah, it wasn’t. I think he figured he just won the Red Sox the championship, and he just became a legend. You would smile with an axe embedded in your right leg if you accomplished such a thing. He did not score from first base on Sandy Leon’s double, and he definitely would not have kept up any charade and sacrifice in what turned out to be a pre-tty, pre-tty, pre-tty important insurance run.

A compromised Nunez was not done. He still had to make this great catch in the very next half-inning.

Nunez was still a free agent right before pitchers and catchers officially needed to show themselves in Florida and Arizona this spring. The Mets reportedly chose Todd Frazier over him. Frazier made a highlight catch diving into the Dodger Stadium crowd down the third base line on Labor Day. Except it turned out he didn’t really catch the baseball. Nunez signed with the future American League champions. He caught his ball. Because he’s a legend. A double legend, actually. He would never have had to buy a beer in Boston ever again. I know people say and write that all the time, but I think that would have been the case had Ian Kinsler kept his footing the following inning. He would eventually have to tell them to stop to remember what it was like to be sober again.

But Kinsler did lose his footing. So somebody else had to step up.

Rick Porcello started the game for the Red Sox, lasting 4 2/3 innings, and Nathan Eovaldi ended up throwing 31 more pitches than Porcello. Eovaldi broke a bunch of World Series records for a relief pitcher, which is what will happen when your 1-4 hitters go 0-for-28 and you maintain throwing high-90s and some 100-plus stuff over six innings of work.

Eovaldi has gone through two Tommy John surgeries already. He pitched Games 1 and 2 in relief throwing 100-plus mph. He was expected to be the Game 4 starter, and he kind of was, except 21 hours earlier than what was reasonably comfortable. He does not have a contract for next year and beyond. His performance was heroic, and so incredibly reckless, making it even more heroic in the sick way sports works sometimes. A former Boston pitcher knows what I mean.

Eovaldi will get attention all right. In a very thorough medical.

Maybe we just watched the end of a career. Or maybe he will be paid handsomely. Or maybe he will get paid less than he wanted. It is up to the Red Sox the next few days to begin to muster a legitimate “yes” to the question of whether it was all worth it.

You need to be logged in to comment. Login or Subscribe
ChicagoOriole
How does what Eovaldi did compare to Ernie Shore? Finishing a no hitter when Babe Ruth gets pitched from a game for arguing with the umps counts as relief, right?
Reply to ChicagoOriole
richard carter
well done, man.
Reply to richard