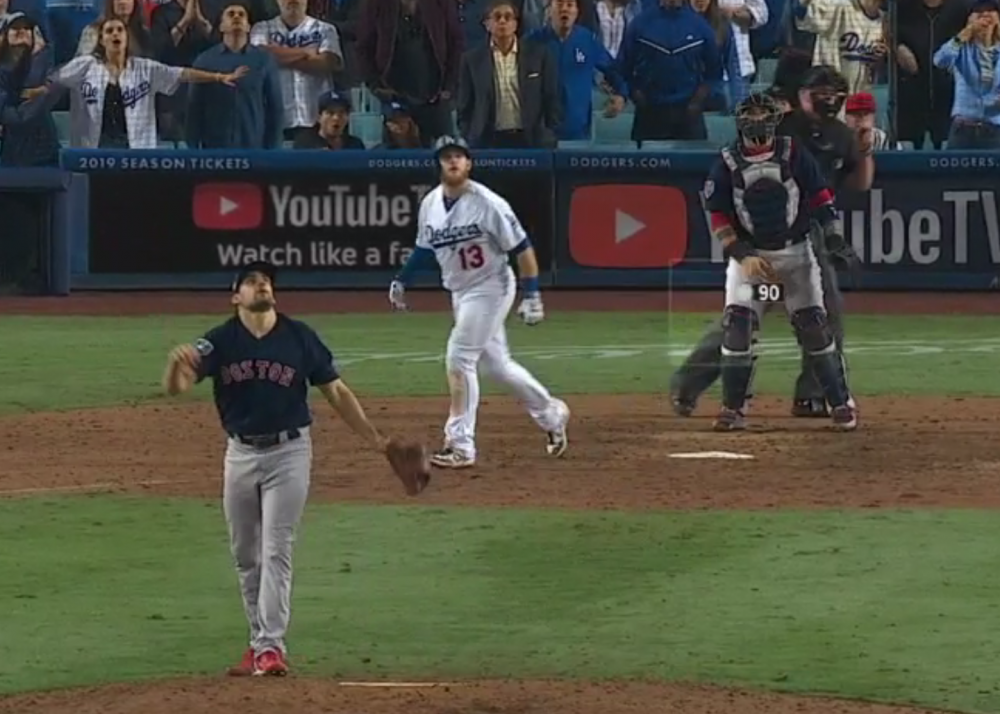 There was no baseball game on Thursday, which is an important precursor to the World Series game between the Red Sox and Dodgers that began Friday and stretched, incredibly, into Saturday. The rate of innings per hour, you see, is supposed to decline in October, kick into a different gear to allow more pitchers you’ve heard of to throw more nasty pitches on TV, and so on.

Baseball has never been better at understanding what is supposed to happen. Channeled from the top of organizations like the Dodgers and Red Sox, through Dave Roberts and Alex Cora, onto the field of play and into the box scores, “supposed to” is internalized, exploited, avoided. Every day, it tightens its grip more and more.

The grip, near the beginning of the evening on Friday, was such that Cora and the Red Sox felt comfortable entering attack mode, seeking to turn their commanding 2-0 World Series advantage into a 3-0 stranglehold, with a clear-eyed understanding: Rick Porcello was on the mound; at least nine pitchers waited in the wings, several of them multi-inning arms by pedigree. There was no work accumulated in the previous 24 hours. There was another off day, or potentially an offseason, just 23 or so innings away.

One of the things we now know is supposed to happen: Pitchers get worse the further they go in the game, be it from exhaustion or creeping familiarity or some combination thereof. When the downshifted postseason scheduling allows for it, gains in run prevention can be made—are supposed to be made—by rescuing pitchers from the third-time-through-the-order trap before they fall in.

That’s what sent Cora to the mound in the fifth inning, after just 61 pitches from Porcello. Dodgers leadoff man Joc Pederson was about to take his third crack at the Boston starter, and he’d already landed the most significant blow, a third-inning homer. There was no good reason to make Porcello test his luck against likelihood.

A parade of Red Sox pitchers shut down the Dodgers and kept that coveted 3-0 position within reach. There was no reason to turn back.

Only, there was Walker Buehler. For rules, there are exceptions, and Roberts saw the 24-year-old for the exceptional ace he was. Buehler marched into the teeth of the Red Sox lineup for a third time, blew its best hitters away for a third time. Under the direction of a manager who has ended several no-hit bids with hand signals, and emptied his bullpens and benches in pursuit of every advantage, Buehler was clearly something different Friday night and was given room, with World Series chances hanging in the balance, to do what he wasn’t supposed to do.

So, wittingly or not, the Dodgers stepped away from the typical October game plan a good while before the Red Sox did, which proved helpful when it all went off the rails.

Boston’s advantage in the series seemed, at first, to decrease the urgency of this one game. As it stretched out, though, toward what are usually the later innings, the closeness seemed to amplify Cora’s aggression.

After Jackie Bradley bashed a game-tying homer, David Price entered and got two outs in favorable matchups in the ninth inning before giving way to Craig Kimbrel. And it went swimmingly! The Red Sox got through 10 innings by using seven pitchers.

The problem: The Dodgers, by capitalizing on Buehler’s exceptional performance, got to the same point having used three, and Pedro Baez still had some work left in him.

There were a hundred tiny little Red Sox decisions in the game that could be nitpicked, but most of them drove at the same thing, a good thing: That 3-0 advantage is right there. Go take it.

And if Ian Kinsler were a bit faster, or a bit more sure-footed, they might have seized it. If Eduardo Nunez hadn’t sustained his 87th lower-body injury of the past two seasons on a freak catcher collision, they might have seized it. Heck, maybe if Mookie Betts starts at second base as a bolder solution to the National League ballpark problem, the whole chain of substitutions and events unfolds differently.

Had any one of several plays gone a tiny bit differently, Roberts might be facing questions about allowing Scott Alexander to face right-handed hitting, or about planning for six outs from the homer-prone 2018 version of Kenley Jansen, despite his playoff excellence thus far. He might be facing questions about why David Freese didn’t pinch-hit earlier, in a bigger spot.

Instead, the tie game stretched on, and eventually past the point of no return for Cora. Well, it got there for everyone, but Cora and his ace in the hole were the most pressed.

Nathan Eovaldi, Tommy John recoveree turned trade pickup turned sudden staff savior, entered in the 12th inning and wiped his name off the board for Game 4 in hopes of delivering the Game 3 they had invested so much in. He put on a stirring, ace-like performance. It was beautiful, forceful, and critical, but also nauseating for the creeping sense of doom that came with each at-bat he took out of the three hole, for the nebulous but potentially painful effects on his future ability to throw a baseball hard.

His presence in the game flipped the urgency equation. With only Drew Pomeranz left in the bullpen (and Chris Sale in the dugout), the Red Sox teetered toward a narrow 2-1 World Series advantage without a clear option to start Saturday evening. Suddenly, it felt as if they needed the win.

They couldn’t get it, though. Eovaldi’s heroics took him into the danger zone from which Porcello had been spared, personifying the entire team’s exertion in stretching toward a kind of finish line that Game 3 allowed them to see.

Amidst widespread delirium in the baseball-watching world, Max Muncy cut them down and moved that line back out of sight with a walk-off homer in the 18th inning. Eovaldi paid an undeserved price for going 90-plus pitches, for throwing triple-digit heat in a third straight game.

He was supposed to suppress the Dodgers for about six of those precious, dwindling innings before the off day. He did. It was just supposed to count for more.