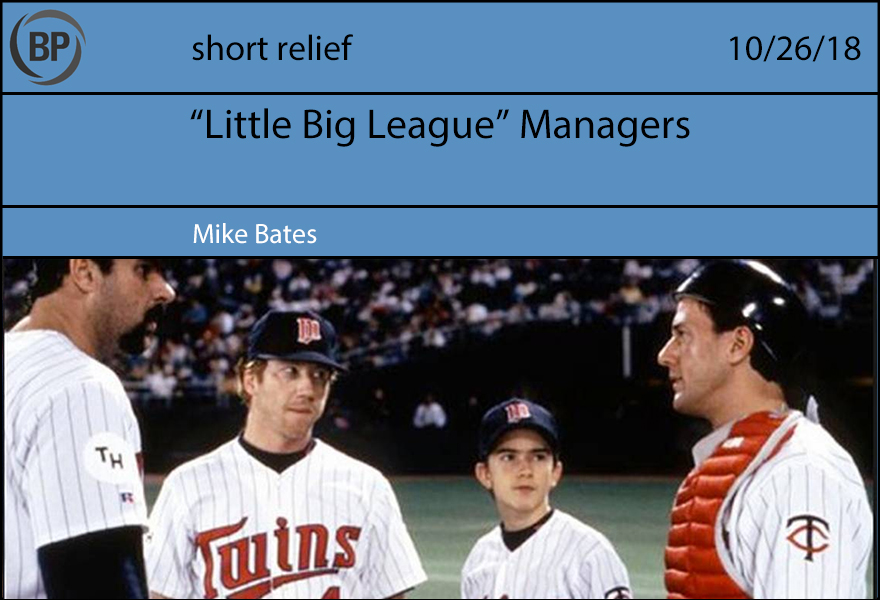 Major League Baseball used to take the whole “don’t break news during the postseason” pretty seriously. Calvin Griffith, for instance, was once beaten with a sack of oranges for announcing he was going to explore paying his players in company scrip in 1983.*

*Do not fact-check this.

But times change. Recently, the Commissioner has politely requested that teams restrict their press releases to coincide with off-days during the World Series so as not to distract from the actual matchups. Everything else is considered fair game.

So the Twins and Blue Jays each took advantage of yesterday’s no-baseball to shoehorn in news that they’d hired new managers, both pilfered from the Rays organization. The Jays will be bringing longtime Tampa Bay minor league manager and bench coach Charlie Montoyo north of the border while the Twins have hired former Rays wunderkind center fielder Rocco Baldelli, of late a first-base coach, front office executive, and major-league field coordinator. As a Twins fan, I’m much more concerned about the latter.

Baldelli, as you no doubt know, is just 37 years old. And while that’s definitely pretty young to be a manager, the Twins have made hiring young blood something of a tradition over the last few decades. Tom Kelly was just 35 when he was hand-picked by Andy MacPhail to lead the Twins on the field in 1986. Minnesota fans got two World Championships out of that decision, including their incredible worst-to-first performance in 1991, and at least one fan whose work you are currently reading.

But the Twins went even younger still when 12 year old owner Billy Heywood, who had recently inherited the club from his kindly grandfather, hired himself to run it in 1994. Under Heywood’s leadership, the Twins made an amazing run out of the basement of the AL West, stopped just short of a division title because of the incredible defensive prowess of Ken Griffey Jr, who pulled what would have been a pennant-winning Lou Collins home run back with a leaping grab at the Metrodome fence on the last day of the season.

It wasn’t a championship, but it was still exciting. After that, Heywood resigned as manager, and the franchise slipped into mediocrity for the rest of the decade. With attendance dwindling and stuck in a horrible stadium, Heywood eventually tried to contract the club in 2001. It was a rough time. Still, at least I can take comfort that this is not the first time a team will have had a manager younger than me.*

*Also, do not fact check this. 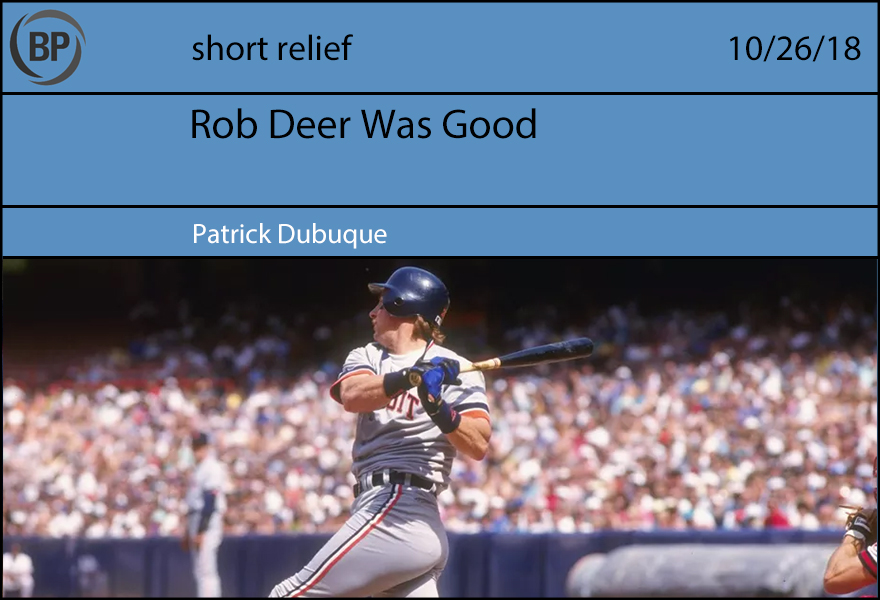 Rob Deer wasn’t even the first Rob Deer in his own town; before he was Rob Deer, there was Gorman Thomas, swinging for the fences of the next stadium over and slamming a pocket can of Busch on the way back to the dugout after every strikeout. But for some reason, Gorman was a little too good, or a little too old, or a little too Gormbo, and so Deer became synonymous with the hulking, infinite, lopsided brand of ball that came to define baseball in his wake.

Folks have been arguing about Rob Deer, or rather what to make of Rob Deer, since his first strikeout in 1984. Bill James, in his 1987 Baseball Abstract, wrote: “A lot of people have written him down for a couple of 40-homer seasons and a 10-year career. I’ve been wrong a lot of times, but I don’t see it; I still don’t think Deer will connect enough, over a period of years, to stay in the lineup.” James was wrong, and he was right: Deer only lasted eight years, and he never did reach that 40-HR mark, peaking at 33. But the primary concern for James was that Deer was a .190 hitter, according to the MLEs, rather than .230: it hadn’t dawned on him that, given enough walks, Deer could hit .190 and still be a productive major league hitter. To be fair, most people struggle with it now.

Cora wasn’t talking about Deer, but he may as well have been: the right fielder’s 1990 line, .209/27/69, might be the best representation of his career. But there are other numbers than the ones Cora quoted: he walked 12.5 percent of the time, and held his own in right field to the tune of a 7.2 FRAA, resulting in a solid two-win season. But this is old news: we know what Rob Deer is, even when we struggle to feel it.

Time has been hard on Rob Deer. Twenty years ago he was maligned for his batting average; ten years later, he was a sabermetric darling, a scenic back route toward good hitting. Now, he’s a scourge on the game, his army of disciples threatening to render the sport into binary. He himself has become two-dimensional, or at least only visible by the three outcomes he hit; people have forgotten that he could field and run a bit, that he was an actual athlete beneath it all.

But the real crux of Cora’s judgment is that use of the word “good.” A team full of two-win players is probably watching baseball from home in October, but every World Series team needs its average players to spackle the lineup. Perhaps Deer simply isn’t good enough for the 2018 Boston Red Sox? But they found room for Eduardo Nunez. Or maybe this is coachspeak, a motivational tool: not only do we not accept failure, we don’t even accept partial failure.

I was always drawn to Rob Deer not because he was some sort of statistical savant, but because he was flawed, like a wounded animal that still fought its hunter. There’s a certain elegance in acceptance, in the idea that Deer was willing to expose his weaknesses, become defined by them, in order to be his best self. Or perhaps that Deer is an illustration of how we choose to define ourselves: we are not our best days, or our worst days, but the sum of them. It doesn’t matter what sticks out, it doesn’t matter which pieces of memory stick to our gut. We have numbers, and the numbers say that Rob Deer was about 10 percent better than the average hitter in the average at bat, and 100 percent more interesting. Rob Deer was good. 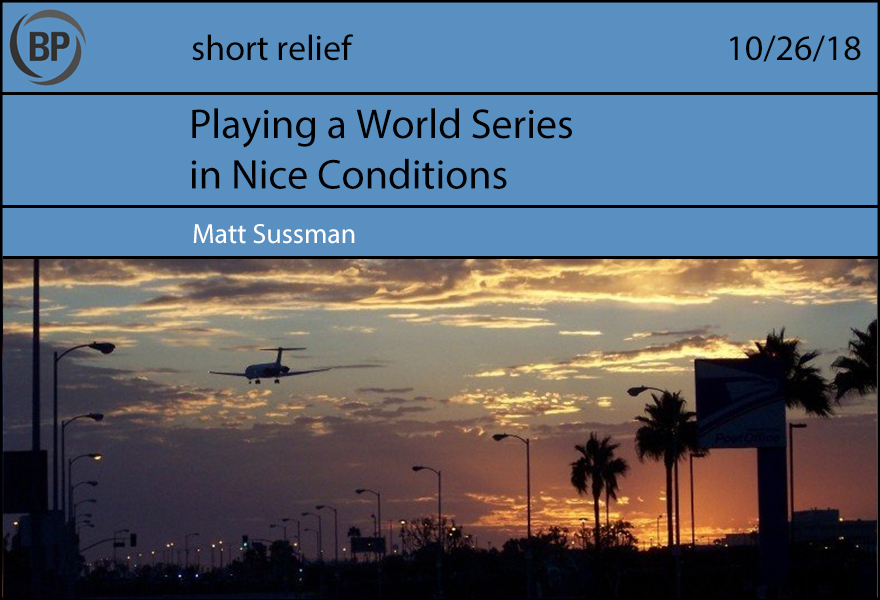 The Los Angeles Dodgers were at a visible disadvantage in the first two games when they had to play a game of baseball when it was cold. And you see, this was a disadvantage because Los Angeles is usually warm. It’s almost certainly why they lost, and it’s definitely why they moved from Brooklyn 60 years ago.

Now the venue flips. The Dodgers get to enjoy their familiar comfortable 75-degree weather. The Northeastern coastal town of Boston is not used to this—definitely not in October.

The front office understands that this is going to be an adjustment, but remarks that most teams have to play in ideal conditions. Expect the Red Sox pitchers to warm up wearing short sleeves, occasionally wiping their brow with a towel or forearm if sweat starts to form. They’ll also feel compelled to smalltalk about what a hot one it is today, and nodding solemnly in return, interfering with pregame coaching.

For the first few innings the team is going to get by on pure adrenaline. Possibly once in a while one of the fielders, after standing still for so long, might swat away a few flies. Others might feel a slight nip in the air if the wind suddenly gusts. These are distractions that the team must get past.

By the sixth inning, when both teams will conceivably be into their bullpens, we might see players start to squirm around the dugout, lose focus, and suddenly take notice of the elements. At this point they could scramble to start a campfire and roast hot dogs. They might even take the drastic step of pouring Gatorade on themselves to cool off, but perhaps only after a victory. Brock Holt is almost certain to take his shirt off.

But this is why they earned home field advantage. The Red Sox won the first two games and could conceivably drop all three in this subtropical climate and win it back in their trademark frigid weather.