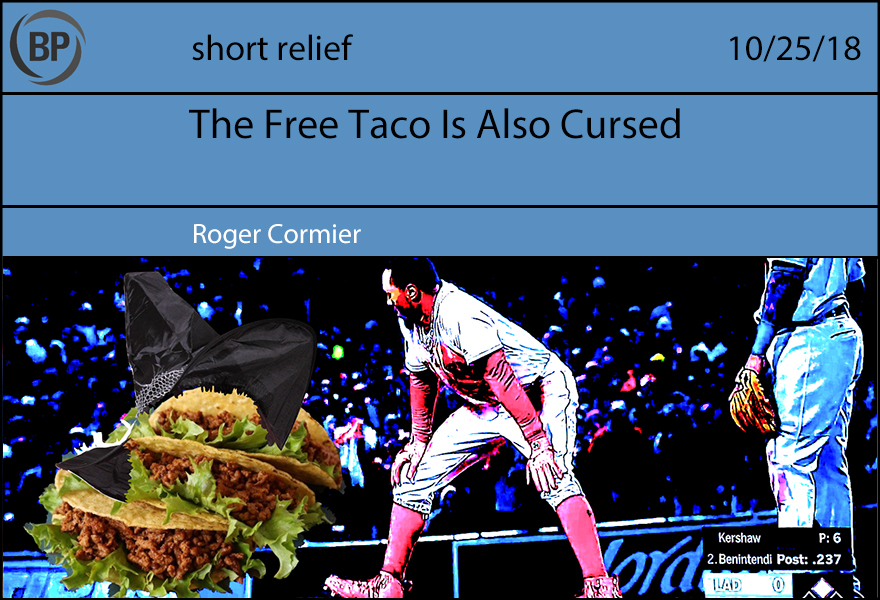 Mookie Betts stole second base in Game 1 of the 2018 World Series. He was anointed a hero for this. He was deemed the individual responsible for giving us all one free taco next week if we so desire one, because he was the first to steal a base in the best-of-seven contest. Mookie Betts might be remembered someday as the individual who ended world hunger. You might think this was all some good luck: Betts did this off of a botched hit-and-run attempt, and he is not even the first Mookie to steal a base first in a World Series. Yet here he is: the first Mookie considered a taco lord. Such good luck.

But reader: What if it was bad luck?

Baseball and Halloween have all too comfortably become intertwined with one another since the beginning of this decade, with World Series games typically being contested on October 31 and/or the Saturday before Halloween, a.k.a. The Real Halloween When the Young Adults Play. Personally, I would just like to remember the waking nightmare of Daniel Murphy failing to adequately field a ground ball in Game 4 of the 2015 series as is, but instead the memory is littered with costumed twenty-somethings, thanks in part to poor planning, dumb superstition involving myself and a retrospectively too confident friend, and October 31 falling on a Saturday. By midnight, I found myself realizing the series was effectively over for the Mets while staring at a man dressed as Grantland, which had turned into a ghost one day earlier. I complimented him on it, while thinking I had never actually felt a “too soon” moment before until just then. Happy Halloween?

My mishegas aside, there is some logic behind baseball and Halloween coming together. Players in the sport seem particularly open to believing in superstition and all things haunted. And as I was saying before I was adorably sidetracked, the steal a base steal a taco promotion might be totally cursed. Let’s look at the previous “winners”:

I could stop typing now, right? Hahaha, no.

The rookie must have been feeling pretty good and not hungry, helping the Red Sox sweep the Rockies.

He won it all again with Boston in 2013. Instead of eating more tacos in front of a bunch of strangers, he celebrated that World Series by signing a seven-year, $153 million deal with the hated Yankees. Needless to say that is a lot of Nacho Cheese Doritos® Locos Tacos Supreme®s, almost enough to suffice for a long binge of a long-running television series.

Ellsbury has become a—you ready?—ghost of his former self ever since. Whenever he is actually healthy enough to play he resorts to stealing first base by way of breaking single-season catcher’s interference records. He is technically not retired from the sport, but that’s only because he is asked once every two months by a Yankees employee if he is still active. Andrew Benintendi tied Ellsbury’s impressive all-time Red Sox playoff record in Game 1 and literally said he didn’t care.

Lost the World Series, and never found his way back to avenge the loss. His Uncle Josiah was no longer POTUS to help him out either. He might as well had been a fictitious character.

Won the World Series! Then won another! Then it came out publicly he united his teammates. In their hatred of him.

Entered free agency right when teams decided they were cool with not trying or discovered they might prefer life underneath the luxury tax. Hasn’t been to World Series since, and now every team is on to his new team’s “Start Wade Miley every time” shenanigans.

Lost World Series. Haven’t gotten past the Division Series since. Won as many playoff games this year as we have. Felt the need to apologize for celebrating a walk-off home run he hit in his home country.

Won World Series! Was the one player over 25 the Marlins signed in the offseason. Traded to the Mariners right before they stopped winning, but that tends to happen around August.

Conclusion: I just wasted your time. How spooky is that? 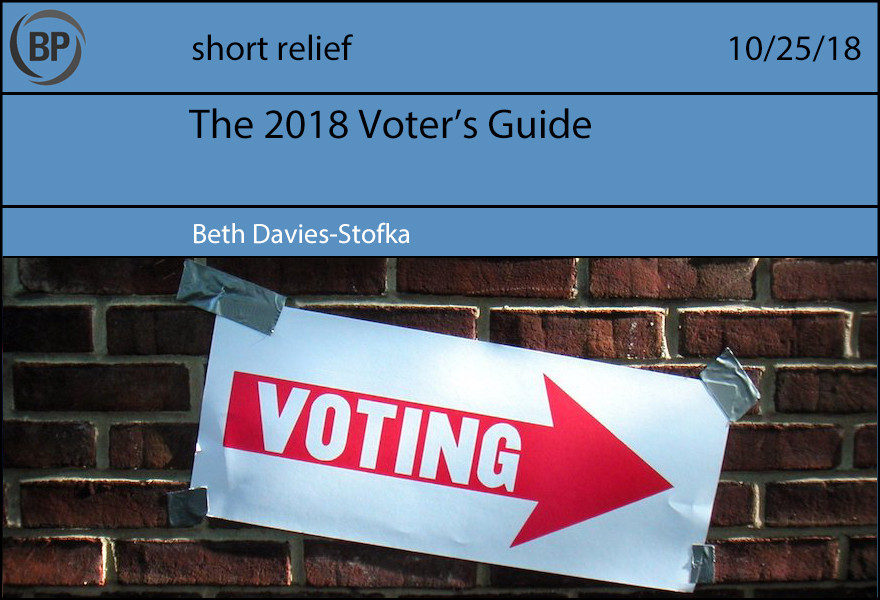 Election Day is right around the corner. This year, the ballot includes a handful of propositions aimed at broadcast reform. There is something for each voter to consider, and it is our hope that this guide will help answer your questions.

Proposition 110 would direct networks to hire as broadcasters former players who cannot keep a straight face. In short, cutups.

Proponents argue that this would solve the pace of play problem. It would make baseball so much fun to watch that nobody will notice the length of games. Opponents argue that the measure would require broadcasters to spend too much time preparing for games.

Our view: Imagine a world in which young Bob Ueckers, coached by Sarah Silverman and John Oliver, fill the booths of radio and television to call games. While we realize that it is difficult to compel a person to be funny, we endorse Proposition 110 because we really want this to happen.

Proposition 111 would require directors to devote 25% of camera time to players having fun and kidding around during games.

Proponents argue that by committing more camera time to players and their antics, viewers will get to know them better and feel more connected to them. Opponents worry that the cameras will catch players doing things that are not appropriate in a family broadcast.

Our view: There is plentiful evidence of joy on the field and in the dugout. The presence of the cameras will attract a growing number of playful and funny players like moths to flames, encouraging them to ham it up and make us laugh. We believe that putting the cameras on the fun will create more fun, so we endorse Proposition 111.

Proposition 112 would require the refurbishment of all broadcast booths into open-air spaces.

Proponents argue that the actual sounds of the game heighten the overall experience. Fans cannot always go to games in person, and the loss of ambient sound on the broadcast diminishes the experience. Open-air broadcast booths would bring game sounds to the fans. Opponents want the networks to retain exclusive control of the sound quality of games.

Our view: Ballpark noise makes a substantial contribution to the fun. In person, we hear loud, pulsing beats that energize the crows. We hear organists poking musical fun at the opposing team. We participate in the collective shouts and sighs of the crowd. Nothing that FOX, TBS, FS1, or MLB Network does can compete. Open the windows, and let the game in.