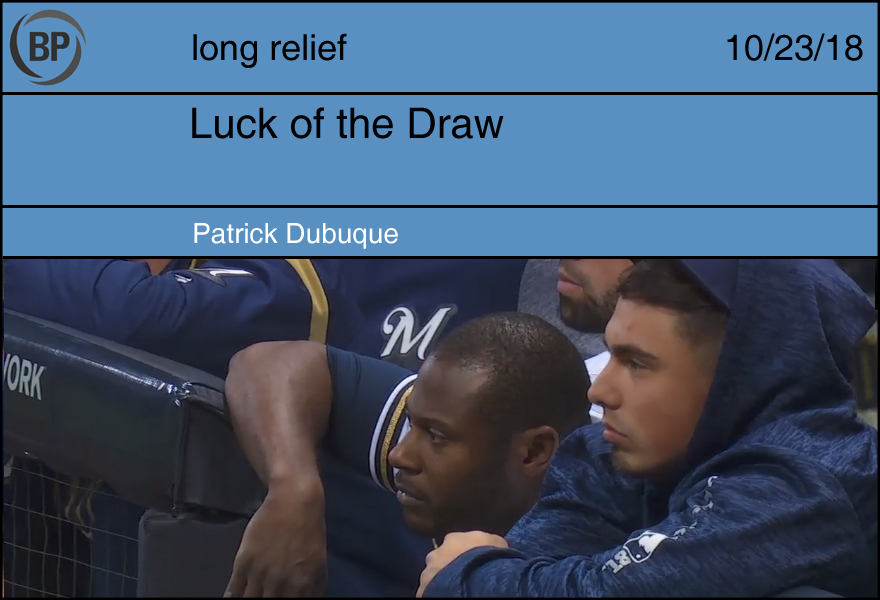 Tomorrow the Boston Red Sox and the Los Angeles Dodgers will face off in the 2018 World Series. I find this fitting, because the entire 2018 season is destined to escape my memory, and because I always assume that one or the other played in any series I can’t recall. This may seem unfair to Dodger fans, given that the team has only attended one championship contest in the past thirty years, but they should see it as a compliment: they simply absorb this unclaimed peripheral greatness in my head. I think of them as winning the 2002 series over the Giants, instead of the Angels, despite the fact the Giants and Dodgers are in the same division. It’s just gray and navy blending into the past. The subconscious doesn’t feel the need to play by the rules, as long as you’re not there to check on it.

Not going to the World Series are the Milwaukee Brewers, though they made a good run at it. It was particularly disappointing to watch the unheralded, ahistorical quality of Jhoulys Chacin disproved by a single Cody Bellinger swing, which made the sound of a balloon popping; to claim that the game was over before the ball landed is hyperbole on multiple levels. I was equally sad to see the lie of Erik Kratz laid bare. Without a personal ambition in the NLCS, I found myself defaulting to that historical cause, the underdog: I even ceased wishing ill of Wade Miley, and forgave his team of stealing the Seattle Pilots away from me, eight years before my birth. It’s amazing how we can rank our passions when demanded.

As I enjoyed the fragments of playoff baseball that my child-laden life afforded me, I couldn’t shake the feeling that the same illogic that I was rooting for was also actively upsetting me. The chyrons that emblazoned themselves on my muted television screen told me that Christian Yelich was batting .186 for the series, postseason deity Justin Turner a mere .241. Batting average I have come to accept, but postseason batting average, that most arbitrary of sample sizes, was too much. There was an implicit message: they were telling us that the heroes were failing. How could they not be? Either seven games of baseball is enough to be significant, or the playoffs are meaningless.

The playoffs are meaningless.

Whenever I’m sitting at a table with a deck of cards, waiting for my friends to assemble, I’ll deal out poker hands. I’ve been doing this for as long as I could shuffle; it’s just a manual tic, something to do as I avoid the horror of being bored for even a fraction of a moment. I’ll deal my five cards, trade in, draw replacements, nod at the results, and then mix them all back in and start again.

A psychologist might trace the line back to the empty summer days of my childhood, bereft of siblings and the internet, and miles away from my elementary school and my friends there. I would lie on the sun-drenched carpet of our living room, playing all four sides of a board game, rolling and representing each opponent as one would the smiling face of a game show contestant. Some games worked for this better than others: open information was vital, since I wasn’t prepared to bifurcate my personality entirely to hide my (their) intentions. So Clue was out, as were Battleship and Stratego. The chess games typically ended in draws, although occasionally I’d hand myself a back rank mate. The best titles tended to be highly dependent on luck: Monopoly and Yahtzee made the best time-killers. In each case I as no longer playing against myself, or my selves, as it were, but against the dice. Even at the time, it felt a lot healthier.

In fact, it wasn’t my math teachers in grade school that taught me the secret arts of probability: that was always a chapter at the end of each year’s book, never quite gotten to. Instead, it was The Monopoly Companion, which was ostensibly a history of the game and the ironic failure implicit in its incredible financial success. But it also contained counterintuitive strategies of the game, that the railroads are the most profitable properties on the board, that the allure of Boardwalk and Park Place were easily outgained by the humble orange properties thanks to their fortuitous location: six, eight, and nine squares outside of jail. The math captivated me: this was a system, something to optimize. It turns out Monopoly’s sabermetrics movement came just a little after Bill James.

This theme crystalized in 1986 when my father brought home a beautiful beige Macintosh Plus and, with it, a game called MacVegas. This was my love of games in its purest form: No pretend opponents to beat, just the odds themselves.

I played a lot of MacVegas as a kid, even though “playing” basically meant bumping up the wager to the highest possible level and clicking on the lever. I would bet myself into abject poverty, with no clue that I was playing at Dostoevskian suffering, then restart the game with a fresh bankroll. It was utterly pointless, and remained so even on those moments that the three BAR symbols lined up and the pixelated coins would flood the screen, my bliss just as fake as the dozens of losses before it. I kept playing because the losses never really felt bad, and the occasional jackpot felt incredible.

This sad little story encapsulates how most people get into sports. They invest very little into the game, and roughly half the time they get a shot of dopamine for their trouble. That’s how they hook you: It’s a game you can’t lose.

As much as I enjoy gambling games, I don’t gamble. It’s not based on any particular moral tenet, although I do think that, as an invisible force guiding the redistribution of wealth, it’s not the best thing. It’s just that by adding money to the equation, all games become meaningful, important. They stop being games and become work, the same fiscal calculation that impacts one’s college fund, one’s coupon-clipping spouse. They stop being fun. I played in a single poker tournament in my twenties, in the casino across from my apartment. After four smoky hours, I took second place out of a hundred, good for $400. I put the cash toward the next month’s rent, and never went back. I had been miserable.

There are Brewers fans, I believe, who are equally miserable with their $400. I don’t blame them.

It’s starts off just hoping for winning, but it’s hard to maintain that level of detachment. For me, it began with fantasy baseball. I loved fantasy baseball from the moment I discovered it as a boy, noticing some points-based system advertised on the back page of a random newspaper sports section. It was The Monopoly Companion again, only far, far better. For all the competition and camaraderie that are instilled into the culture of fantasy sports, in reality they’re the ultimate only child pursuit: it’s an intricate method of betting on dice. All fantasy sports are gambling; the daily versions are simply more naked. I didn’t pay to join the newspaper contest; I just picked names and tracked them from home, adding up the points from the box scores. I don’t remember how I did.

Where this idea of fandom falls down, as we grow up, isn’t money, but rather time. Six-year-old me had very little value for my time: if the fake slot machine didn’t go my way, or my favorite figurine, the iron, didn’t win the Monopoly game, all I’d be out was the opportunity cost of watching some old Lassie re-runs on Nickelodeon. Ditto the older version of me dealing cards at the table; that’s dead time. But baseball games are long, even the short ones, and it becomes necessary at some point to justify the amount of our lives we assign to this unfeeling, colorful, noisy thing. We borrow happiness against ourselves in the lean years, tell ourselves that it will all be worth it. And it will be, if that ending ever comes; for Brewers fans, those debts remain unpaid. They are sad today because of themselves, because they built up expectations about this meaningless set of pixels on their television screens, the way we imbue personalities into our pets and roombas. This is not criticism. In fact, it’s a compliment. There’s a reason sports exist like this: we willed them to be. We needed them.

The last time I was sitting at a table with a deck of cards, it was with some baseball writer friends. I was teaching some of them poker. One was off fetching beer, so I turned over five cards without thinking. Before me lay a full house.

The odds of pulling a full house before the draw aren’t as high as you might think: 0.1441 percent, or 1 in 693. (The Las Vegas Golden Knights were 500-to-1.) Still, it was fairly notable, for those around the table who had experience with poker. We marveled at it a little bit. Then our friend returned, the game had to continue, so I shuffled the matching cards back into the deck. Ultimately, it was a cool moment, as gratifying as that little game on the Macintosh, but equally meaningless.

That is, I think, the solution to the whole problem. We know that the playoffs are a lie. We’ve always known. Seven games isn’t enough time to decide anything, not the quality of Christian Yelich’s courage or David Price’s resolve. That’s actually a feature of baseball, the sport that allows us to, on any given night, draw a full house, see a no-hitter or a miraculous play. The playoffs are every bit as dramatic, and emotional, and exciting as MLB promotes them to be. The only mistake is to believe they mean anything, that baseball means anything.

Win or lose, it’s all the same: you nod, and then just shuffle the cards up and deal them again. It sounds kind of stupid when you describe this multi-billion-dollar industry that way. In fact, it’s a compliment.

You need to be logged in to comment. Login or Subscribe
Michael McKay
This was a very anti-climactic article. I was nodding my head all the way to the bottom, when I got provoked to leave a rant.
Yes -- baseball is backwards. We play 162 games to determine which teams are really better. Then we play three short series to give teams that weren't really the best one last chance, a "get out of jail free" card, at redemption. The final round made sense when the AL and NL were separate tribes, but now it's just about the money. Which is fine. But -- seriously, as a Red Sox fan who will be cheering very loudly from the right field boxes Wednesday night and will (based on my past history, going back to 1986) live and die by the results for the rest of my mortal days, your casual description of "oh, full house, cool, back in the deck" -- that does not describe my personal baseball existence. I would welcome hearing the description of why you felt miserable finishing second and winning $400 in the poker tournament. Was that your one flash of actually being a real fan (of yourself) and being miserable because you "failed" finishing second instead of first? Experiencing genuine feeling is something to be celebrated, not avoided! (spoken by the finance professor, not a psychoanalyst)
Reply to Michael