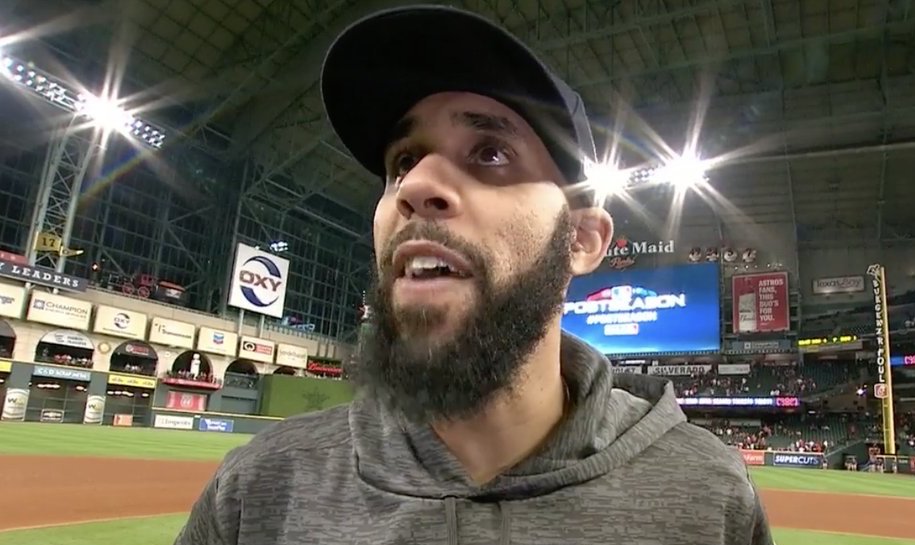 What do you think when you hear that Justin Verlander is going up against David Price in potential pennant-clincher? Verlander cruises, Price doesn’t make it through five, the Astros survive for two more nights? Narratives are funny things, aren’t they?

Facing elimination, the Astros sent out one of baseball’s best pitchers for Game 5. Over the course of the last two seasons, Verlander has re-established himself as not just an ace of aces but the last of a dying breed, seemingly immune to such normalcies as fatigue and playoff pressure. On the TBS broadcast, play-by-play announcer Brian Anderson described him as one of the greatest clutch playoff pitchers of all time—just a scant minute or two before J.D. Martinez launched one practically to Galveston. Time and time again on these last two playoff runs, Verlander has given the Astros just what they needed just when they needed it. I suspect he would easily win a poll of nearly any constituency for the pitcher you’d most want to start in this situation. He may also win his second Cy Young award next month.

With planned Game 5 starter Chris Sale ailing and unpalatable alternate options like a bullpen game or the mercurial Eduardo Rodriguez, manager Alex Cora sent out Price on short rest to try and lock down the pennant. Price’s playoff debacles have become just as legendary as Verlander’s heroics. John Farrell wouldn’t even start him last October, consigning his most expensive player to a middle-relief role. In this postseason, Price was terrible in ALDS Game 2 against the Yankees, and struggled mightily to get into the fifth inning against this same Astros squad on Sunday night.

It’s often amusing to see how these stories evolve if you’ve been around long enough. It was only 10 years ago that phenom pitching prospect David Price debuted on the national stage as the unflappably clutch relief savior of the Rays, shutting the door on a very different looking Red Sox team at the end of Game 7 of the 2008 ALCS. In 2015, the Blue Jays traded for the impending free agent—now established as one of the game’s best pitchers—to serve as their mercenary ace. He was splendid down the stretch as Toronto launched a stirring comeback to capture the division, and while he scuffled early in the playoffs, he certainly pitched well enough to win the decisive ALCS Game 6. Yet they lost anyway.

Since coming to Boston, he’s dealt with the weight of being the highest-paid pitcher in baseball, while being just a touch worse and a bit less available in the regular season than you’d hope when signing a pitcher for $217 million, and then following it up with playoff misery. Yet he’s still a heck of a pitcher when he’s healthy and on.

Meanwhile, Verlander put up a 5.57 ERA in his first eight career playoff starts, through his MVP and Cy Young season in 2011, not all that far off Price’s playoff struggles. Who even remembers that now? More recently, we’re only 14 months removed from Verlander clearing waivers, viewed as an aging pitcher on the downside on a neutral or even negative-value contract. When he ultimately moved to Houston, the mechanics of the trade were functionally structured as a salary dump-plus, with the Tigers retaining $16 million of his salary to receive a package of good-but-not-great prospects.

Even his supposed immunity to fatigue doesn’t bear out; like most starters, Verlander has always been substantially worse the third time through the order than the first two, a trend which was even more magnified in 2018. But because of how good Verlander’s been recently, and the large ring from last year that he can wear when he so desires, we choose to ignore some facts and just believe in him instead.

The pins looked lined up for the narrative to hold. Frankly, Price was put in a position to fail in this game. In his career, this was his first start on a three-day rest cycle. Further exacerbating that, he spent most of the eighth and ninth innings on Wednesday hot in the bullpen to back up erstwhile relief ace Craig Kimbrel. Boston’s already shaky bullpen was reaching the breaking point, extended too far and unlikely to bail Price out unless he could pitch effectively and deep. But with Sale still sick, the Red Sox had no better option. Verlander, meanwhile, was coming in fully rested and on a huge tear.

For five innings, the two starters mostly held serve. Martinez’s homer in the third came immediately after what probably should’ve been a called third strike, and that was the only run on either side through the fifth. Then the pre-ordained narrative gave way to simpler truths. A tiring Verlander, on his third time through the order, quickly gave up hits to Mitch Moreland and Ian Kinsler to lead off the sixth inning. Rafael Devers followed it up with a three-run homer that was probably aided by Houston’s short porch in left field, and the Astros were in a four-run hole before their bullpen got past the stirring stage. They’d never recover.

Verlander’s opposite number was shoving. It didn’t take long into this start to see that this David Price wasn’t the same October disaster that he’s all too often been. He quickly established his changeup as the key offering, leaning on it as much as he ever has. His 12 swings and misses on the changeup were the most he’s had in a start since September 2016. Behind that, he threw both fastballs and his cutter with the conviction and authority he may have lacked in recent Octobers.

Game 5 saw David Price at his very best, the guy who became the highest-paid pitcher in the game, the guy whose utter brilliance in the second half of 2018 propelled the Red Sox far ahead of the Yankees. Perhaps his “demons” will show back up; everyone has a bad start or two now and then. Perhaps they’re conquered for good. Perhaps they never existed at all. Right now it doesn’t matter, because the Red Sox have won the pennant.