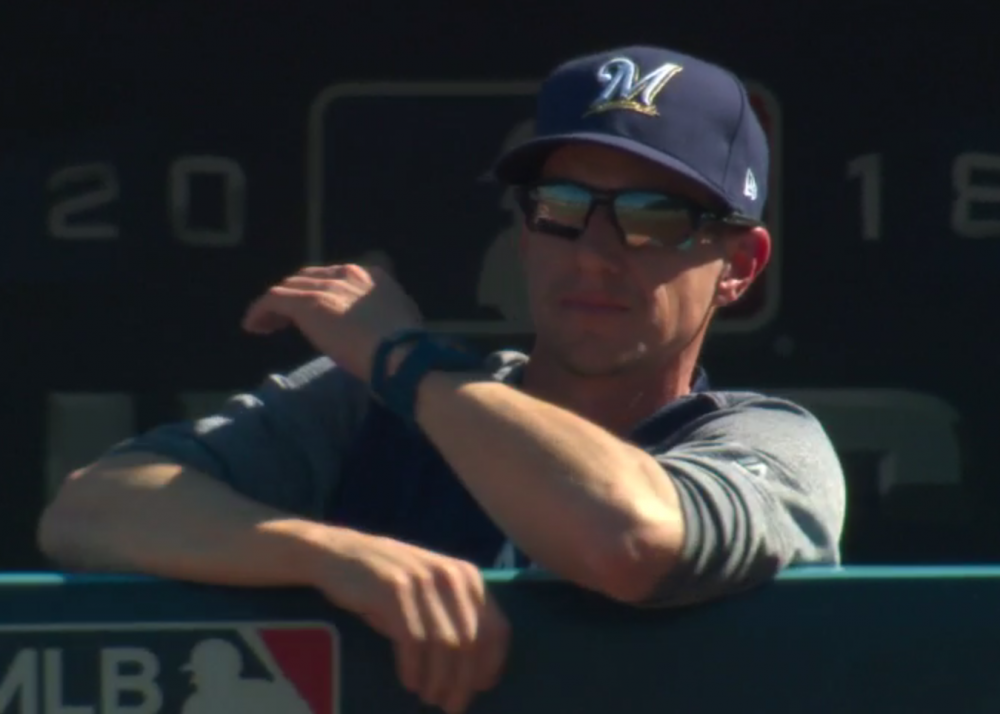 What the Brewers had Wednesday was a plan. It was the type of gamesmanship that leaned into the underdog status inherent in facing Clayton Kershaw. Yes, even October 2018 Clayton Kershaw. PECOTA gave Kershaw and the Dodgers a 68 percent chance of taking NLCS Game 5, and a 3-2 advantage in the series.

Aware of this dynamic, in some form, Brewers skipper Craig Counsell had up his sleeve the kind of end-around maneuver you try because, well, what if it helps? That, of course, involved pulling “starter” Wade Miley after one batter, because he wasn’t really the starter at all. He was an opposite-handed decoy meant to make things easier for Brandon Woodruff and those who would come after him. Curly Ogden, the Miley of the 1924 World Series, quickly resurfaced in the baseball ether.

The move felt dramatic because of the novelty, but its startling immediacy belied a more spaced-out focus: To shuffle up the deck in a way that might help at some later point in the game. Turns out, it wasn’t nearly the most momentous step toward a 5-2 Dodgers win, but like some sort of ballpark-served amuse-bouche, it heightened the senses. If every game began with a blindside pitching switcheroo, maybe we would be better at catching the decisions—big and small—that did actually make a difference. Like these …

What with the spying shenanigans du jour, it’s tempting to think about whether the Dodgers got wind of the Brewers’ plan. The lineup delivered by Dave Roberts had Cody Bellinger in the leadoff spot against a lefty, a departure from the platoon-reactive Joc Pederson–Chris Taylor tandem. Max Muncy was also plugged into the starting nine despite appearing to be up against a same-handed hurler, bucking a usage pattern—being an initial-pine-rider against lefties—that might not have made the most sense to begin with.

See, when the Washington Senators sent Ogden to get one out (he faced two batters) in 1924, he was meant to bait the Giants’ best hitter, a young Bill Terry, into the lineup. Their early switch backed the best hitter into facing same-handed pitching or exiting the game, which Terry eventually did. The Brewers’ pitching machinations have seemed aimed at eliminating flexibility for the Dodgers in the later innings rather than actually suppressing their best bats.

In this case, only David Freese required early replacement for handedness purposes. By virtue of having Bellinger and Muncy in the initial lineup, Roberts mostly thwarted 2018’s Curly Ogden revival.

2. Kershaw went with the spin.

Kershaw’s stat line in Game 5 (7 IP, 3 H, 1 R, 9 K) looks like a show of force, but it’s his own workaround, of sorts. With the fastball sitting low 90s, worth just one swing and miss on the day, he threw it less than a third of the time.

His slider and curveball, though, were dominant. Kershaw turned 18 of his 66 breaking pitches into whiffs—10 out of 45 sliders, eight out of 21 curveballs. It was his best bat-missing day with the breakers all season. By count, by percentage, by any measure you’d like.

3. Someone scheduled the game for mid-afternoon on the West Coast.

And the shadows crossing the infield couldn’t have hurt.

Maybe he just found something. It’s not like there needs to be much explanation for Kershaw tossing seven frames of one-run ball against anyone, but picking up those bending, zipping darts seemed borderline impossible in the middle innings.

4. The Brewers took length over specialists for their bullpen.

One night, carrying Junior Guerra looks like a stroke of genius. Not 20 hours later, it begs the question of which big-out bullpen specialist might have been more likely to avoid contact with, say, the tying or go-ahead run in scoring position.

Smart plans sometimes look prescient. Other times they fall victim to circumstance. Occasionally they do both in the same 24-hour period. Baseball is hard.

5. Woodruff faces Muncy in the bottom of the sixth inning.

With Josh Hader unavailable, Counsell was not quick enough to deploy Xavier Cedeno (or someone, anyone) against Muncy in the sixth inning. It turned out to be the highest-leverage at-bat of the game.

This isn’t even a hindsight criticism. It was flat-out odd to take outside-the-box, Muncy-limiting measures days in advance, but then leave a righty in to face him for a third time with the go-ahead run at second base. All kinds of unpredictable twists and turns can bounce a team off the path to victory, but this was an entirely foreseeable pitfall.

The Brewers fell in.

6. The Brewers pitched to Austin Barnes with a runner on third base and one out in the fifth inning.

The tying run scored an inning before Muncy’s go-ahead knock. Austin Barnes drove it in with a grounder up the middle.

Here was the setup when he came to the plate: One out, Taylor on third base. No one else on base, and the pitcher’s spot due up next in the form of Kershaw. Roberts, though, has Yasiel Puig swinging in the on-deck circle. After the game, he said it was an unrepentant deke. Kershaw was never coming out at that moment. Counsell probably gathered that. Probably.

Either way, he has this choice: Do the age-old infield-in alignment to try and escape the inning by getting Barnes and Kershaw. Or walk Barnes, get the second out via the pitcher, and try to deal with Bellinger afterward, without the threat of a productive out spoiling things.

I, for one, thought Counsell’s choice was reasonable. Maybe more reasonable than the Miley gambit. This sort of strategic fork in the road comes up 37 times a week in July, but felt seismic and theatrical Wednesday. In that way, all the strategery worked. It shook things up. If you were plotting along with the dugouts, it even made for some dramatic TV. The Dodgers’ earned advantages still came through as expected. But nothing was really as expected.