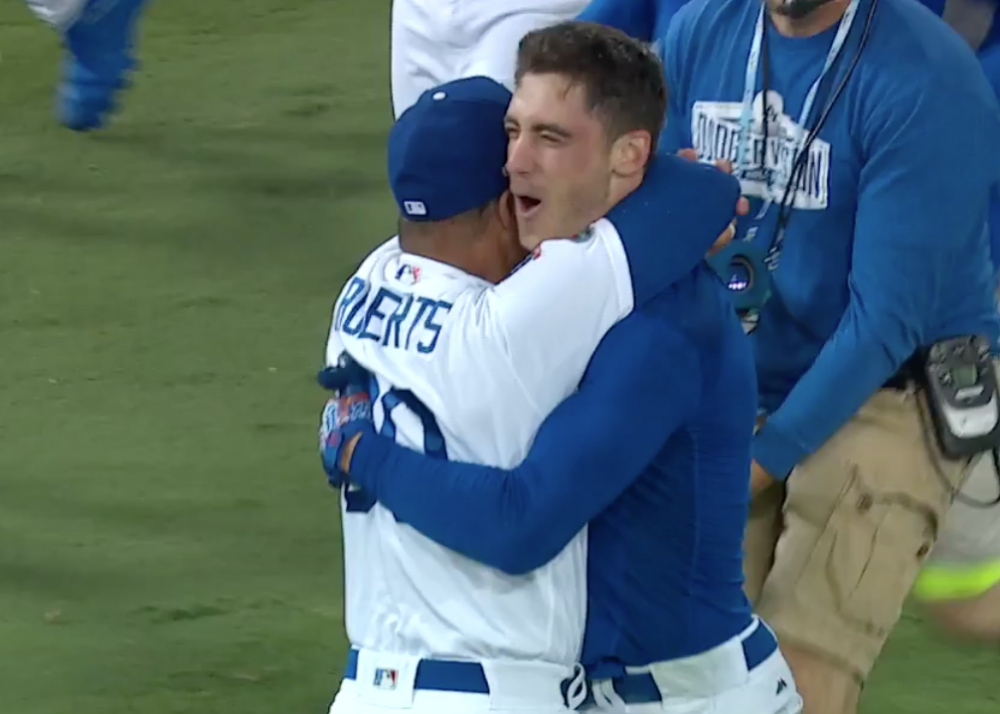 Somebody had to win.

No, somebody had to put up more runs than the other team last night. Eventually. It is in the rules. It was required by law. It kept being said, definitely online and I’m sure even in the dugouts, albeit not above a whisper.

The Brewers and Dodgers battled on Tuesday night for a very long time. Over five hours. One of the longest games in postseason history. Second-longest in NLCS history. They started playing NLCSes in 1969.

The Dodgers struck out 17 times. It is a postseason franchise record. The Dodgers have been around since 1883.

The Dodgers were the team that “won.”

They emerged “victorious” 2-1 in 13 innings. The series is now tied 2-2. Game 5 will be played in a couple of minutes, following a coffee break. Clayton Kershaw will be on the mound to start. It sounds pretty good for the Dodgers right now.

But before the bright light there was the utter darkness. The Dodgers were frustrated. Really frustrated. So, so frustrated. Frustrated? You don’t know the half of it. They were thisclose to a championship last year. Meanwhile the upstart Brewers showed up fully embracing the #bullpenning thing, which used to only exist in books. You weren’t supposed to pursue the endeavor in real life. Not really. The Brewers, though, looked at their roster and figured they had to. They shortened the game for their starting pitchers and let their relievers share the spotlight.

Suddenly the starting pitchers came into the game last night with a 0.35 ERA in the playoffs. It was a little because they weren’t in fact the industrial-strength nincompoops and outcasts as advertised. It was a little more because the Brewers stuck to a plan and it’s been working, and at least 20 other teams will try to copy it next year. Until then, the Dodgers have the misfortune of facing a unique threat standing in their way of a pennant. It is a challenge, and they were not meeting the challenge.

Game 3 ended in a 4-0 defeat. One of their most beloved players seemed to blame the crowd. Then he made an erectile dysfunction joke, and changed his walk-up music to Justin Bieber’s “Sorry.” Their starting catcher came down with Jay Cutler disease. Neither was a factor last night.

Big Midseason Acquisition Manny Machado was also very frustrated going into last night’s game. He was supposed to be The Man, proving on a national stage he was worth an entire chain of banks. Instead, he was attempting to stop a fire after not running out a ground ball in Game 3. Machado thought he hit it too hard for it to even matter what he did after making contact, but the play ended up close. It was Bad Optics. Instead of saying it was a mistake, he kind of said that specific incident was a mistake on his part. But he said other things, including literally saying he was not a “Johnny Hustle” and it was “not his cup of tea” to run out everything, which sounds like he was trolling every single person who would get angry over not running a ball out in June, let alone October. (He also, hilariously I thought, added 24 mph to his exit velocity in the retelling of the Time He Messed Up. Usually you wait a few years to embellish by 24 percent, not less than a day.)

Machado also behaved more like teammate Chase Utley than Yasiel Puig in Second Base Manners during the third game of the series, and was called out upon review on The Utley Rule for purposely interfering with the poor Brewer trying to turn a twofer.

Machado at first was doing a poor job redeeming himself. This is how the bottom of the fifth ended.

It marked the fourth inning in a row that ended with a Dodger looking at strike three impersonating a statue. Fortunately the score was only 1-1 through five because their starter, Rich Hill, was near his finest. His hooks at times were as sharp and beguilingly beautiful as Squeeze choruses. Hill, though, gave up an RBI double to Domingo Santana in the top half of the fifth inning, and it seemed as if he knew that one run was all Milwaukee was going to need to keep the game going forever and ever.

The frustration eventually was overcome by exhaustion. The Dodgers were so tired they eventually pretty much stopped being who they thought and said they were. Machado went from frustrated to just plain exhausted, no longer remembering who he was and was not, so he slipped into Johnny Hustle and ran out a ground ball. He was near first base when Jesus Aguilar first got the baseball into his glove. Machado tried to trip him. What?

What? While Aguilar went with the “that’s baseball” excuse after the game, Christian Yelich was an MVP opinion-haver.

Oh, and we can’t leave the manager out of this conversation.

Machado singled with one out in the bottom of the 13th, then seemingly made up with Aguilar at the scene of the crime. 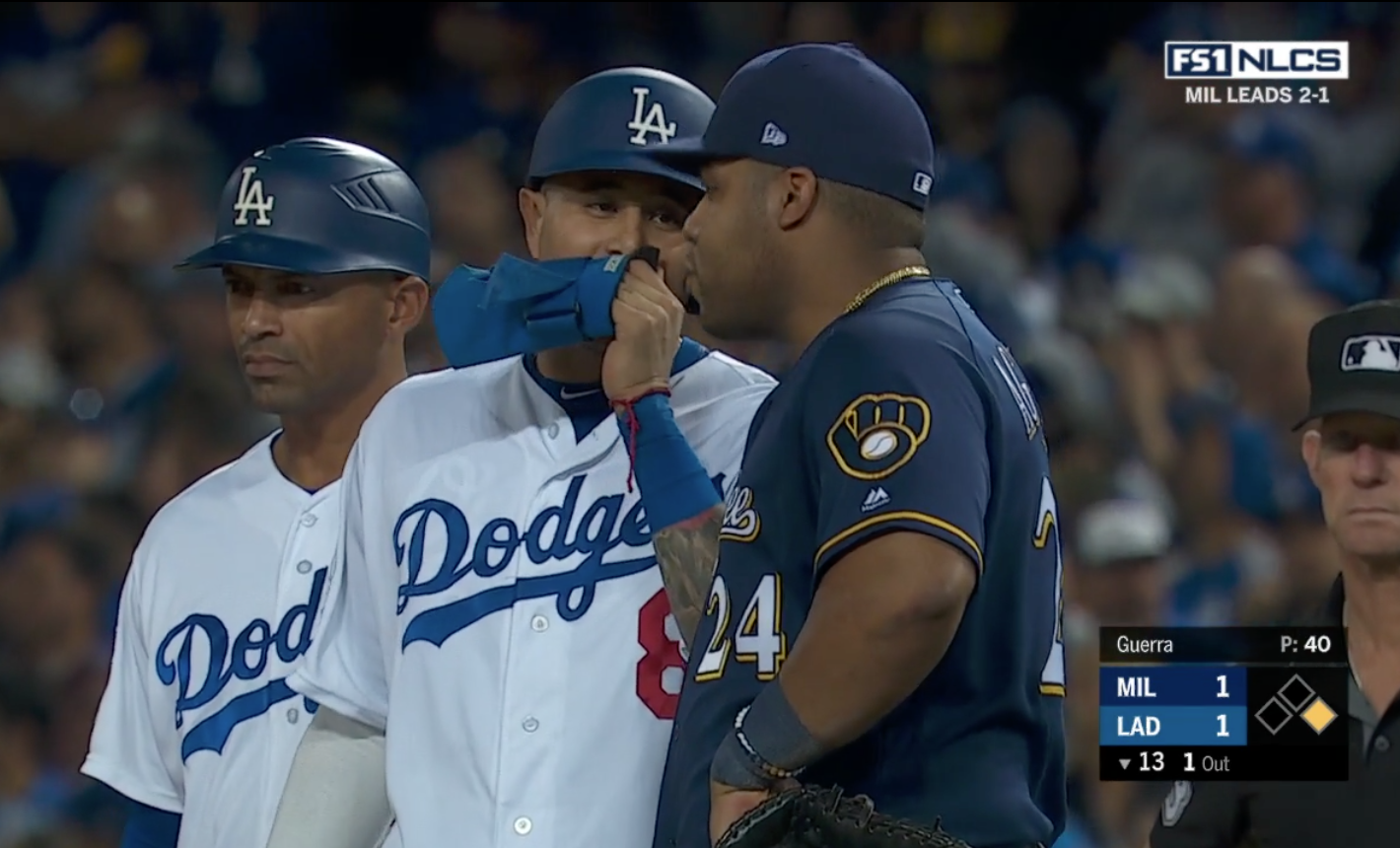 It would turn out to be Act I of his 360-foot journey to redemption (for Dodgers fans). Act II was when he took second base on a wild pitch that did not go all that far away from Erik Kratz.

While you can’t say his new alter ego was More Like Johnny I. Hustledya, it was what some programs would call “a good start.”

Cody Bellinger came up with two outs and Machado still standing on second base. Bellinger came into the game 1-for-21 in the 2018 postseason. He beat the shift on a single in the eighth inning, and made a really good diving catch in right-center in the 10th that maybe prevented a Lorenzo Cain leadoff triple. But before Bellinger did the now incredibly obvious thing with two strikes, Machado was almost picked off to send the game to the 14th.

If Junior Guerra threw it to the right side of Orlando Arcia, you, me, and Mr. Sun would still be watching. He would end up throwing 51 pitches, after tossing just nine previously this postseason, and not throwing that many in a game since September 2. He got the loss because somebody has to … you know …