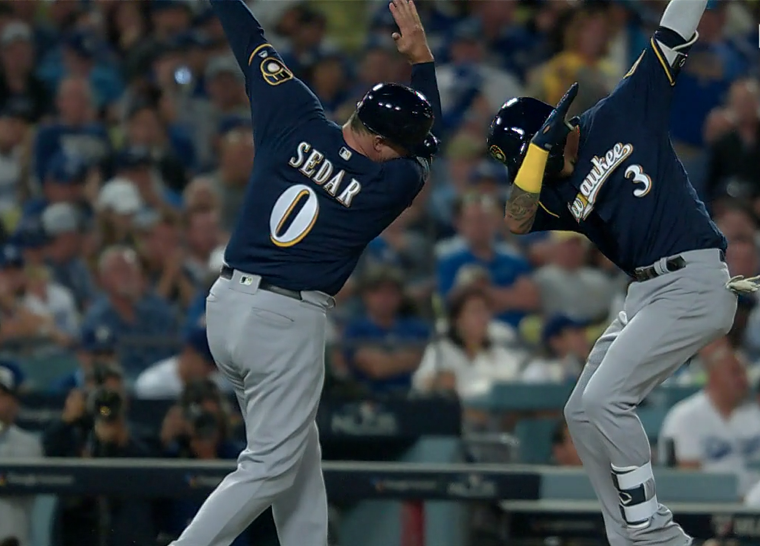 As a society, we’ve come to terms with everything being for sale. Just about all facets of entertainment, if not life, are sponsored, and we spend every waking moment bombarded by advertisements, both blatant and subliminal. Whether it’s deepening our understanding with Statcast powered by Amazon Web Services (oops, I mean AWS), or marveling in awe of a Papa Slam (wow, that one aged poorly), we’re surrounded. That’s one reason why it’s so refreshing to settle in and watch playoff baseball at one of the game’s oldest parks, Dodger Stadium, and one not branded by a sponsor’s wallet. Game 3 of the NLCS brought us the game at its purest and simplest. It brought us the game without any outside distractions or stimuli. Besides, I think we’re collectively too smart to fall for subtle ads or product placement.

It’s an idea that’s been largely absent from the 2018 playoffs—two pitchers locked in battle, limiting the opposition via cunning, skill, and sheer dominance. In Game 3, we were well on our way to a game that Old Hoss Radbourn would have been proud of, featuring nine punch-outs between Jhoulys Chacin and Walker Buehler through two innings. It’s an occurrence that just doesn’t happen these days (just ask John Smoltz), with the Chacin/Buehler pairing tallying 14 strikeouts in 12 1/3 innings, falling a single out short of the longest combined outing for a pair of starting pitchers in this postseason.

Despite the eventual bottom line, Buehler looked dominant in his 100 pitches, with the rookie seemingly shedding the control issues he suffered in the NLDS, and routinely running a 99 mph fastball up in the zone to baffle Brewers hitters. Perhaps the biggest testament to Buehler’s strong outing came in the fifth inning, when Dave Roberts opted to leave the 24-year-old in to hit with one out and a runner in scoring position. Buehler struck out looking. And while the three extra insurance runs make for an ugly, crooked stat line, there’s a certainly a case to be made that they weren’t entirely Buehler’s fault. Travis Shaw scored the game’s second run after a misplayed (?) ball to center field and a wild pitch that’s normally blocked by Yasmani Grandal (more on this gentleman later). Orlando Arcia homered on a 356-foot shank to right field, a ball with a 22 percent hit probability, according to Statcast. Don’t mess with the Santa Ana winds, man.

Chacin, on the other hand, was real and was spectacular. It feels like only yesterday that the hurler was “The One Pitcher Who Was Decent in Coors Field.” Six teams in four years later, Chacin anchors the rotation for a team on the doorstep of the World Series. For a team that many thought to be ace-starved entering the season (and again at the trade deadline), Chacin has more than carried the torch for the rotation, posting his lowest ERA since 2013. The biggest change for the righty has been a reliance on his slider. Only White Castle served more sliders than Chacin this season, a pitch he threw a massive 44 percent of the time. The benders stymied the Dodgers’ offense to the tune of one unintentional walk and six strikeouts, only really encountering trouble once in 5 1/3 innings.

Hey Google, did Christian Yelich wear a tuxedo in his yearbook photo? 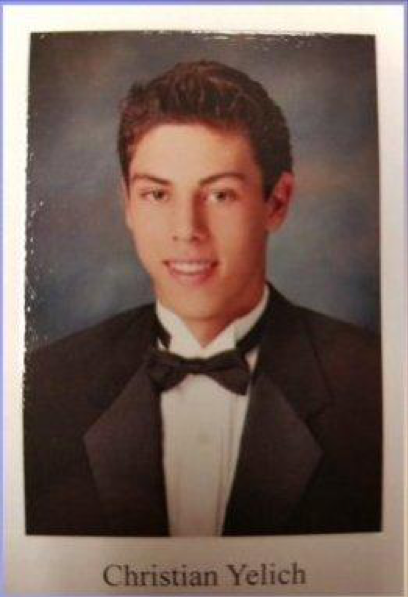 In addition to scoring the game’s first run, yes, it would appear as though he did.

Hey Google, Orlando Arcia homered to put the game out of reach. Is he a power hitter?

In 366 plate appearances this season, Arcia hit three homers, which is not the stuff of which prodigious home run hitters are made. Thus far in the postseason, however, Arcia has matched that total, launching three long balls in seven games. Even though Game 3’s home run might have been slightly less than gargantuan, it didn’t necessarily come out of nowhere. Last season, in his sophomore big-league campaign, Arcia smacked 15 dingers in 548 plate appearances. Some power is there, despite not showing itself in the 24-year-old’s disastrous 2018 offensive output.

Hey Google, were there any cool celebrities in the crowd? 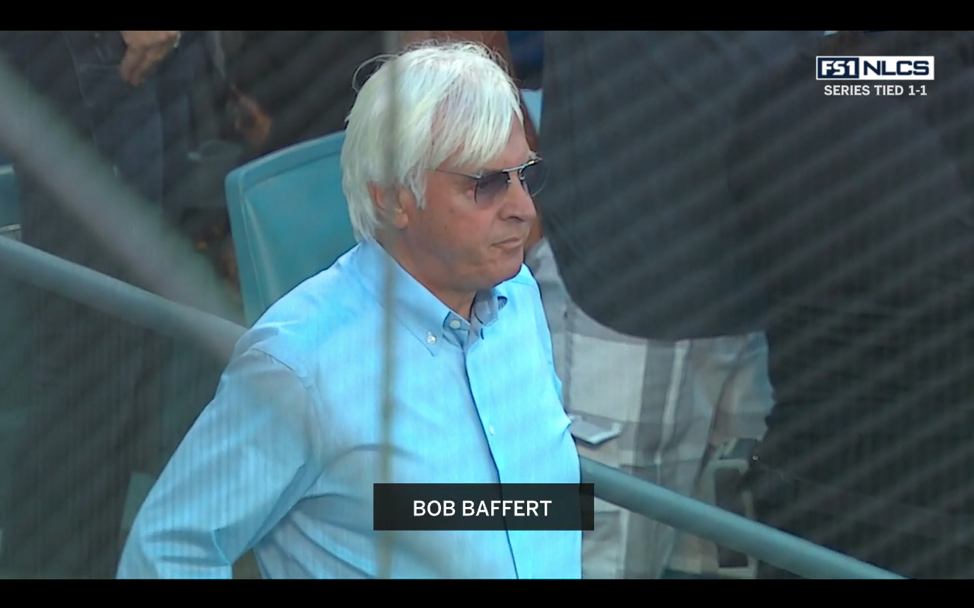 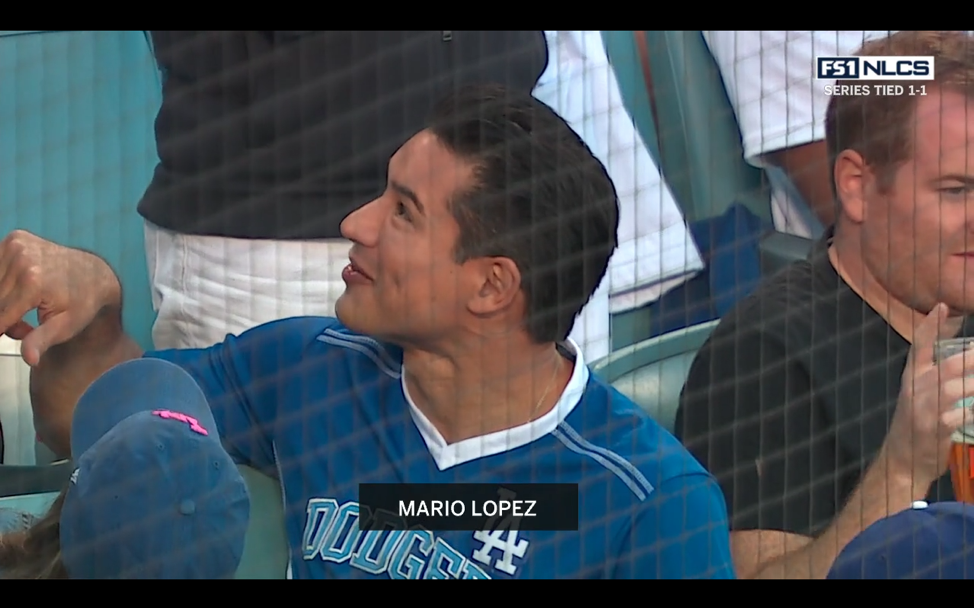 I mean, is he even paying attention? 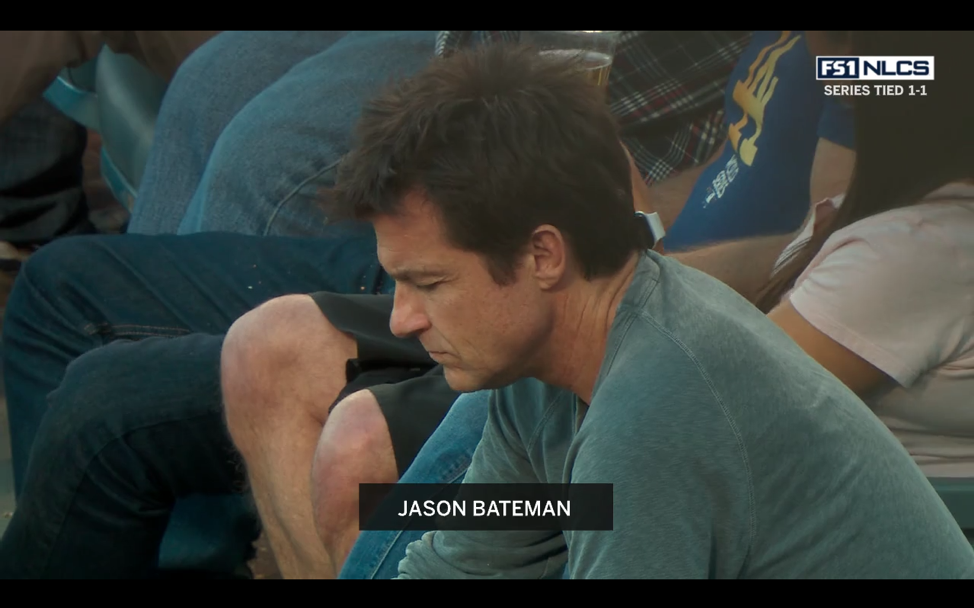 Ok, that’s a little better, I guess, even though he looks less than thrilled.

Grandal’s nightmare NLCS continued in Game 3, accruing his third passed ball of the series, one-third of his full 2018 total. He also didn’t block the aforementioned wild pitch that cost the Dodgers a run in the sixth, a pitch, while technically “wild,” that was also well within Grandal’s purview as one of the game’s perennial best defenders behind the dish. Things got so bad that sections of Dodger Stadium started chanting for Austin Barnes, treating the backup backstop as if he were the hot rookie prospect itching to replace the veteran quarterback that just threw two picks in a row.

Even die-hard Dodgers fan Mary Hart was fed up to the point of weighing in, and as we all know, if Mary Hart weighs in, that’s probably a bad sign.

Mary Hart has not had any Entertainment Tonight from Yasmani Grandal.

Here she is yelling at him for another passed ball. pic.twitter.com/Ljl5vaFqmO

Unfortunately Grandal’s struggles weren’t confined to behind the plate. Yes, he floated a flare down the left field line that was more of a popup than its eventual status as a double, but in Grandal’s four trips to the plate, the switch-hitter saw 16 pitches, and whiffed on six of them en route to three strikeouts. Almost immediately following Game 3, Dave Roberts gave the Game 4 nod to Barnes. All in all, it’s unlikely that Grandal will be fondly reminiscing on the start of this series.

Hey Google, that seems like a downer of an ending, can you show me something fun and silly from the game, like a 50-something third base coach dabbing after a homer? 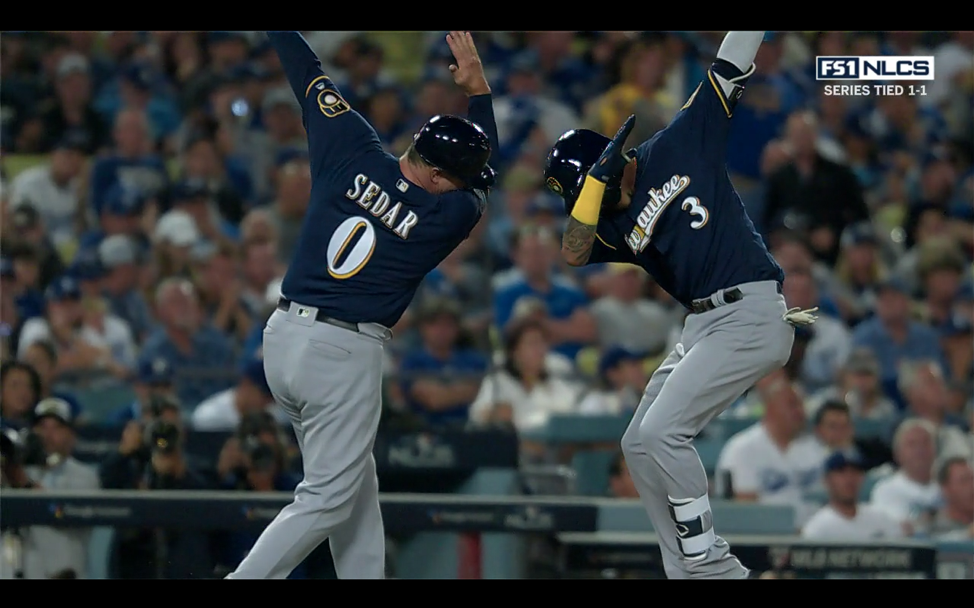 You need to be logged in to comment. Login or Subscribe
deadheadbrewer
Hey, Google--is this one of the better playoff-game recaps? "Let me check--Yes."
Reply to deadheadbrewer
Mark Barry
Check is in the mail!
Reply to Mark