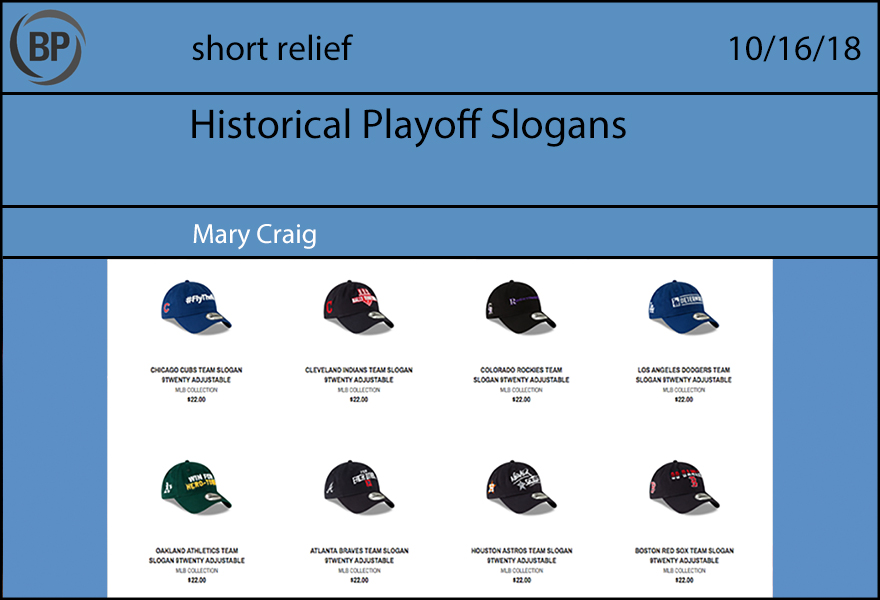 If “9=8” and “Rocktober” have taught us anything, it’s that, come September and October, the English language is no friend to baseball players. So difficult is it to craft catchy yet sensical slogans, it wasn’t even attempted until the contemporary era. Yet the early stages of professional baseball teemed with dramatic storylines and plucky underdogs perfectly suited for corny, uninspired slogans.

The following serves as a taste of what could have been and perhaps a reminder that progress is not always linear.

1869 Brooklyn Atlantics: “You Can’t Lose if You Make the Rules”

Baseball’s first professional team, the Cincinnati Red Stockings finished the 1869 season undefeated. Under any other circumstance, they would have been crowned the champions of baseball. However, due to common boxing tiebreaker rules implemented by the National Baseball Players’ Association, the title actually went to the Atlantics. Members of the Brooklyn team lobbied heavily during the 1868 offseason for the adoption of those rules. Due to the Red Stockings’ undefeated record, many national newspapers awarded them the title, sparking a dispute that lasted for decades.

The previous season, the Bridegrooms lost the championship series to the National League’s New York Giants. The creation of the Players’ Association during the 1889 offseason crippled the American Association and significantly weakened the National League, providing Brooklyn the opportunity to jump leagues and compete against weaker teams in a stable league. The move paid off; Brooklyn won the NL pennant and tied the American Association’s Louisville Colonels 3-3-1 in the championship series to become co-champions.

Sure, it’s more statement of fact than slogan, but secondary education was barely a thing in 1914, so let’s not nitpick. If the greatly overused and lazy phrase applies to anything, it’s this Braves team, which became the first team to win a pennant after being in last place as late as July 4th. The team went on to sweep the Philadelphia Athletics in the World Series, securing the Braves’ last title until 1948.

Looking for the franchise’s first championship, the Brooklyn Dodgers matched up against the Yankees for the fifth time in 10 years. The Yankees went on to win the series 4-2, becoming the only professional baseball team to win five consecutive championship titles. Sometimes slogans are ironic. 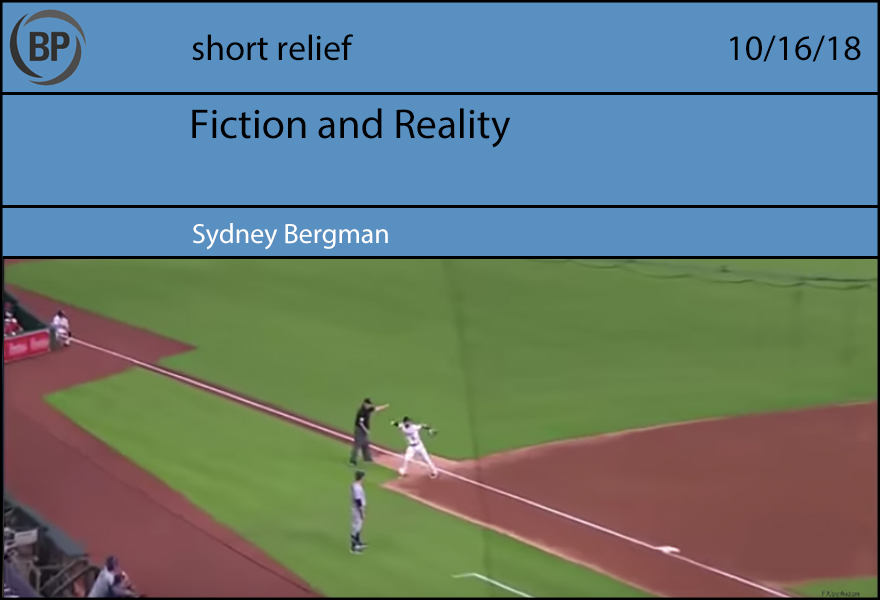 Bregman’s real height is somewhere between José Altuve and Georgie Springer, and if you put him next to either, he’s closer to the former than the latter. He, like Altuve and Springer, is delightful to watch play — he hits a lot of “line drive” home runs, the kind that look like they shouldn’t leave the park but do. His career launch angle is higher than both prototypical power hitters Giancarlo Stanton and Bryce Harper’s, even if his average exit velo is lower and his home runs are more clustered in their location. He gets called “gritty” in the media a lot, in what I assume is not a reference to the Flyers’ terrifying new mascot, even if they both wear orange.

He isn’t alone in his height embellishment. Male athletes’ listed heights tend to have only the loosest connection with reality. I’ve taken pictures next to Ben Revere and Wilmer Difo. I’m 5’4” in my sneakers, and with my hair at its maximum capabilities, and well, I’m sure they’re both the heights they’re listed as under the same conditions.

But part of Bregman’s charm is his playing “bigger” than he is. He hits pull-side home runs, all while wearing a grin like he can’t believe he just did it either. He came only one home run short of Kyle Schwarber in the Home Run Derby, and it seemed improbable even if Bregman’s ISO was higher in 2018 than Schwarber’s (.246 vs. .229).

Baseball sometimes means accepting realities that aren’t actual realities. That’s the thing about the game; it makes you want to believe, despite all evidence to the contrary. Alex Bregman hits like he’s bigger than he is, with enough vigor and enthusiasm that I can almost believe what he’s officially listed as. Almost. 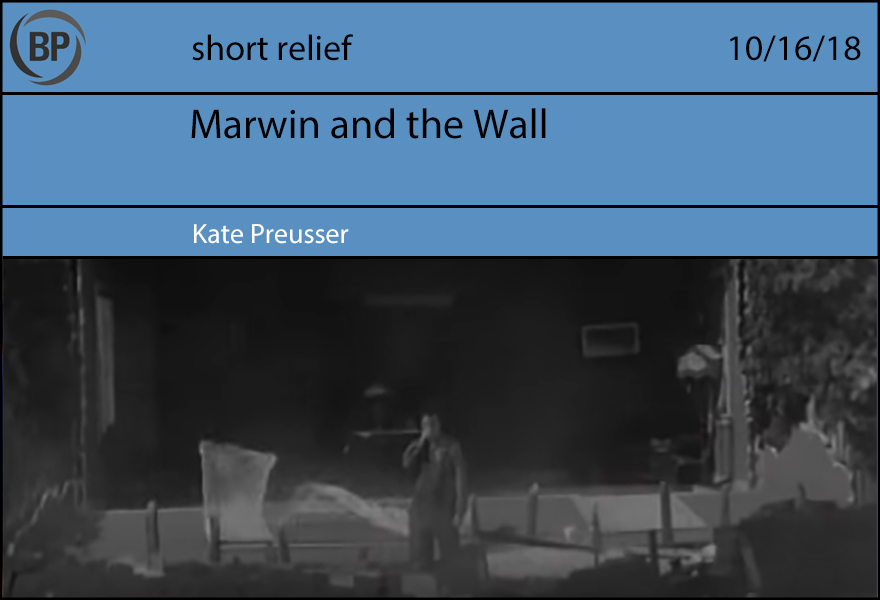 After being soundly beaten by the Astros on their home turf in Game One, the Red Sox rebounded to win Game Two, thanks in large part to a bases-clearing double by Jackie Bradley Jr. that bounced off the Green Monster before taking a wicked high hop over Marwin Gonzalez’s head. The ball was then suddenly possessed by the spirit of the marble in a game of Mousetrap put together by a vengeful cambion and jumped onto the wall like something in a Rube Goldberg machine, trickling along the padding and utterly evading Gonzalez’s grasp.

Marwin Gonzalez is, it should be noted, an athletic super-freak, able to play any position except catcher. Signed by the Cubs out of Venezuela way back in 2006, the Red Sox picked Gonzalez in the Rule 5 draft in 2011 before trading him to the Astros. The Astros were able to unlock something in the journeyman, whose positional flexibility allows him to be an everyday option, and who has a knack for coming up with clutch hits in big spots. This is all to say, Marwin Gonzalez is a good player with an inspiring story who should get real paid this off-season.

And yet the fact remains: the image of him chasing this ball down is hilarious, frame-by-frame. First the big, comical bounce the ball takes off the Monster and over Gonzalez’s head as he frantically positions himself to play the carom. Then, when he realizes the ball has taken a larger bounce than expected, the Fred Flintstone yabba-dabba-doo legs as he tries to change course and accelerate. Then—to me, the funniest part—the image of Gonzalez helplessly chasing the ball down the wall with glove outstretched, calling up images of Scotty Smalls standing in the outfield, hopefully extending a glove straight over his head. And then, the denouement, Gonzalez chasing the ball, now insouciantly rolling along the outfield dirt, eyes locked on his target, waiting for that one good bounce.

Slapstick comedy is regarded by some as lowbrow, relying on cheap gimmickry and an appeal to the lowest common denominator. It’s a memory of an older, less sophisticated time, pies in faces and piano drops and houses falling down around Buster Keaton, and a reminder that workplace safety was a little later coming to Hollywood than other places. And used poorly, it is all those things—inorganic, set up just for laughs, built on a structure of jokes about bodily functions and gross personal injury as shaky as the Mousetrap board. But done well, slapstick comedy is one of America’s purest delights, a comedy of errors compounding upon itself, new and dazzling ways for things to go wrong. It’s the absurdist realization that the world is not our ally; that common, everyday objects will conspire against us. Sideshow Bob walking into a rake will never not make me giggle, and neither will the clip of Marwin trying to chase down this ball fail to delight.

You need to be logged in to comment. Login or Subscribe
Shaun P.
Mary, I am a little confused. The Braves lost the '48 World Series. Do you mean "pennant" by "title"?
Reply to Shaun