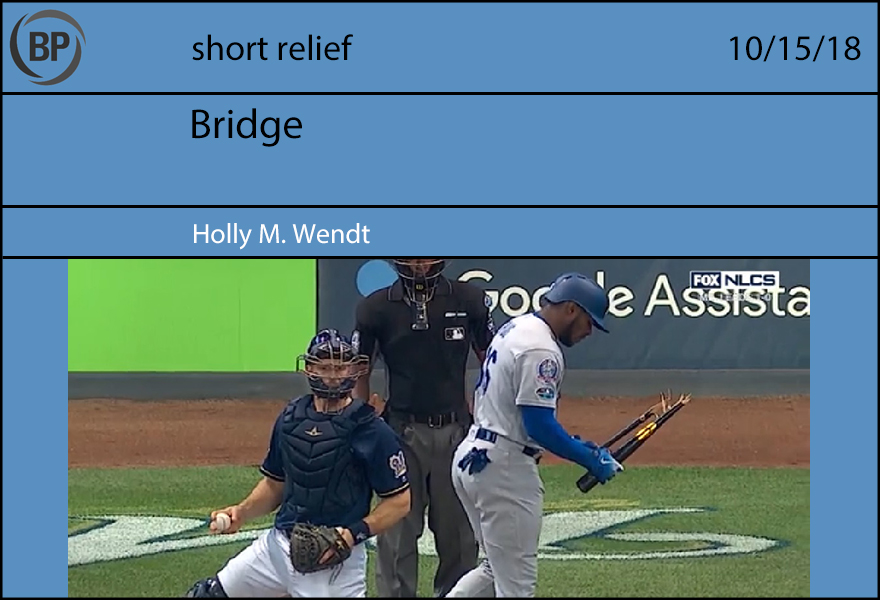 During the top of the 7th inning in Saturday’s Dodgers-Brewers contest, the camera’s gaze took on an increased intensity. After Corbin Burnes walked Max Muncy and gave up singles to Manny Machado and Cody Bellinger, Jeremy Jeffress took the mound for Milwaukee. Joc Pederson served up a single. With the bases loaded and the Dodgers down by two, Yasiel Puig came to the plate.

The game was already the object of hyperbolic scrutiny; these are, of course, the playoffs—the National League Championship Series, no less. There is only one set of games more intently watched, and it’s the one both of these teams are attempting to reach. Baseball, too, with its frequent frets and pauses offers more opportunities to look, and nowhere is that tendency amplified so much as during a television broadcast where the cuts between multiple feeds try to simulate the freedom the fan in attendance has to let the eye rove—simulate and then magnify, magnify, magnify, until the fan at home is closer than any fan was ever meant to be.

Given this broadcast mandate, then, how startling when a baseball moment stands out as particularly singular, as Yasiel Puig’s plate appearance against Brewers’ reliever Jeremy Jeffress did. Maybe it’s only that it’s impossible to watch Yasiel Puig and not feel a certain closeness, a certain intimacy, a certain electricity of possibility. Maybe it was the visibility of Jeremy Jeffress’s breath from the very moment he took the mound, quick and rising through his chest and shoulders as though he’d come running, through all of the pitches he made.

The length of the at-bat, too, compelled: eight pitches, sure, and a two-strike count for five of them, but also the five and a half minutes that Puig commanded the batter’s box, neither he nor Jeffress hurrying the moment. Mid-spectacle: Puig with a little lick to the barrel, a practice now somehow rote, and a nail-biting check-swing.

The Dodgers’ first run that inning came before Jeffress took the mound and the second did not involve Puig at all. Puig was retired on a swinging strike, one that would have been ball three, carrying the baseball-watching world from one moment of possibility to another: Austin Barnes taking a bases-loaded stroll. It wasn’t until the eighth inning that the Dodgers did the relevant damage—Turner turning back the awful glare of Game 1 by means of a two-run line drive over the left-field wall.

When Puig, following his strikeout, snapped his bat over his knee—a gesture of startling ease—a small band of unbroken wood persisted. The camera, its focus narrowed to the most likely source of drama, revealed it: an arcing little bridge of black-lacquered wood, its paler heart bent to the air. As Puig stalked from the plate, he held both ends of the bat with a strange and steady care. The replay camera that exposed it left him—taking the viewer from him, too—before the bridge was broken. 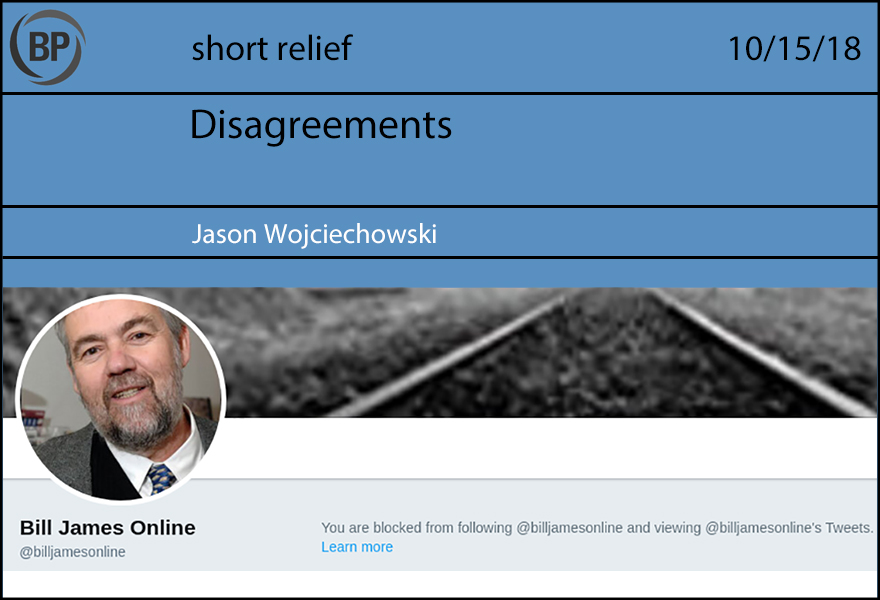 The Grand Prophet of our movement decided to go on Twitter this weekend:

I think he’s wrong, of course, and wrongheaded on top of that, but beyond the message, this is a take that feels unexamined, uncritical. James, as an old white man himself, and with the decades of advantages that come from two of those three characteristics, does not appear to have thought through this type of reflexive “no you’re the real racist” response to one’s centuries-dominant group being called out.

And isn’t thinking through and challenging entrenched ideologies supposed to be James’ entire thing? Aren’t questions from a different perspective what got him out of the bean factory and into the Fenway front office in the first place?

On Saturday night, we finally watched Nanette, Hannah Gadsby’s rightly acclaimed Netflix special. She addresses the “separate the man from the art” question in one segment, and ridicules it as a concept. But that’s art—can we, in fact, separate the creator from the science? I think it turns out there’s no real reason we can’t. I may feel guilty about turning on the lights because it’s wrecking the earth, but not because doing so in any way glorifies Thomas Edison. I don’t have to go back to RBI and batting average, quality starts and wins, just because it turns out that the man at the heart of the baseball stats movement has views that aren’t merely opposed to mine, but are obnoxiously opposed to mine, trollishly opposed to mine.

Which, honestly, is too bad. RBIs and wins were the stats of a simpler, less exhausting time. I wish I did have the excuse. 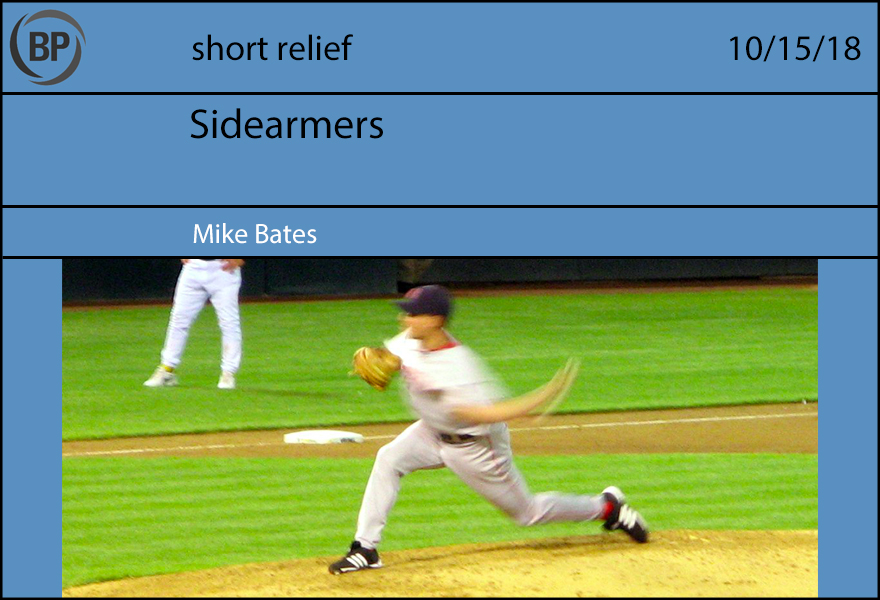 Look, I don’t mean to induce a panic, but Major League Baseball is facing a critical shortage, and no one is talking about it. I’m referring, of course, to sidearmers. With the retirement of Brad Ziegler earlier this week, the game’s sidearming reserves are falling dangerously low.

Ziegler was released in A-ball by the Phillies after just six innings in 2003, but was picked up by the A’s, who convinced him to try dropping down after he struggled at Triple-A. He told me in 2016 that he “didn’t want to do it. … I always looked at a conversion like that as a last resort. Honestly, the biggest thing the A’s did was tell me that, if this doesn’t work, we still want you back as a starter. Ok, so this isn’t a last resort; it’s an opportunity to advance, and advance quicker, and stick longer when I get there.” And stick he did for 11 years in the Majors, highly effective in almost all of it.

But it wasn’t easy. He started out releasing around his knee, but over time his release point migrated north so that he wouldn’t have to bend down and torque his hips as much. It wound up at roughly waist-level this year. It probably cut into his effectiveness somewhat, but allowed him to keep pitching past the point that submariners like Dan Quisenberry or Chad Bradford had to give it up. Ziegler retires as one of the most successful sidearmers/submariners of all time, with more than 100 saves, an ERA 49 percent better than league average across more than 700 appearances. And he’s going out on a year of leading the Majors in games pitched.

It’s hard to get an accurate count, because it’s literally impossible to keep up with all the relievers in baseball at any given time, but I count about 13 at the moment who threw more than 20 innings in 2018. And one of those guys, Peter Moylan, is 39 and not likely to stick around much longer. This, my friends, is not good.

We should want more sidearmers in baseball. They’re delightful. Why are they delightful? Because they’re different. There are still many roads to Enlightenment. But sidearmers are some of the clearest illustrations of how unpredictable baseball can be. They simply don’t do things like others pitchers do. They don’t get hitters out the same way. And that difference is inherently interesting and fun.

They’re also often crazy good. I mean, you already know that they’re typically death to same-sided hitters. But that soft-contact, grounder-inducing style is super effective, especially in front of an infield defense that doesn’t suck. With bullpens now seven or eight pitchers deep, and with more teams employing openers, it feels like everybody should have a variety of looks they can give an opponent.

I’m not cruel enough to insist that Ziegler stick around. It sounds like he’s put his body through hell and is ready to hang up his cleats. But we need more Zieglers and O’Days and Cisheks in baseball. And we need them now.