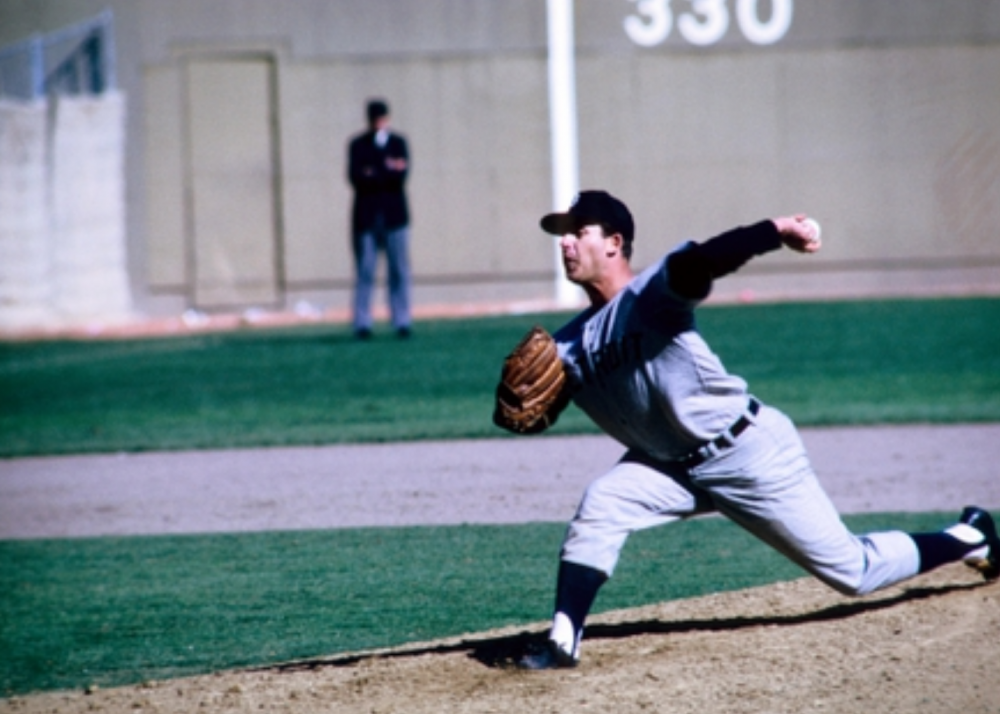 As noted last week, the Tigers dropped three of the first four games of the 1968 World Series to the Cardinals, two of them to an utterly dominant Bob Gibson. Even though they won the fifth game, Detroit traveled to St. Louis needing to sweep the last two games in order to win the franchise’s first World Series in 23 years.

The story going into World Series was the Great Confrontation between Detroit’s 31-6 Denny McLain and St. Louis’ 1.12 ERA Bob Gibson. It didn’t turn out to be much of a confrontation, though. McLain wasn’t at his best in the series opener, allowing three runs in five innings. Gibson pitched one of the greatest games in World Series history, shutting out the Tigers on five hits and a walk while striking out a still-standing record 17 batters.

The two faced each other in Game 4, and the matchup was more one-sided. The game was played in cold and wet conditions. McLain complained that he couldn’t get loose, and it showed, as he allowed six hits and a walk in 2 2/3 innings before the game’s second rain delay, from which he didn’t return. Gibson, by contrast, allowed one run on five hits and two walks, striking out 10, as the Cardinals took a 3-1 lead.

There would not be a third meeting between the two. With the series on the line, Detroit manager Mayo Smith called on McLain to pitch Game 6 on two days’ rest. McLain’s shoulder felt better, thanks to shots of both cortisone and xylocaine before the game. (McLain, whose last good season was 1969 and whose career was done before he turned 30, later claimed that he’d been getting cortisone shots in his shoulder since 1965, when he was 21. McLain is not exactly a my-word-is-my-bond kind of guy, but the story has credibility.)

On offense, the Tigers exploded. Cardinals starter Ray Washburn, who was credited with a win in the Cardinals’ 7-3 Game 3 victory, had a bad day. He surrendered two runs in the second inning on a walk, a double, and a single. In the third inning, the wheels fell off. Washburn allowed a walk and two singles. Cardinals manager Red Schoendienst brought in Larry Jaster to relieve, and he allowed a single, a walk, and a grand slam to Jim Northrup. That brought in reliever Ron Willis, who surrendered a walk and hit by pitch before McLain made the inning’s first out, sacrificing the runners to second and third.

But the Tigers weren’t done, as they scored four more runs. Detroit sent 15 players to the plate in the inning, scoring 10 runs. In The Year of the Pitcher, the Tigers tied the 1929 Athletics’ record for the most runs scored in a World Series inning. They won, 13-1, forcing a seventh game. McLain went the distance, surrendering nine singles while walking none and striking out seven.

With the series tied at three games each, Cardinals fans still felt confident with Gibson on the mound. Detroit countered with Mickey Lolich who, like McLain, was pitching on two days’ rest. The lefty, who’d been dropped from the Tigers’ rotation in July, had won two games in the series and allowed four runs while striking out 17 in two complete-game victories. But Gibson, MVP of the 1964 and 1967 World Series, had allowed just one run in 18 innings and was on the verge of breaking Sandy Koufax’s three-year-old record of 29 strikeouts in a World Series.

The game was a 1968-worthy affair, scoreless through six innings. Gibson was Gibson. When he struck out Northrup to end the second inning, notching his third strikeout of the game, he broke Koufax’s record. Through six innings, the only Tiger to reach base was Mickey Stanley via an infield single.

Lolich was less dominant, allowing two singles and two walks through five innings. In the sixth inning, he allowed a leadoff single to Lou Brock. Brock batted .464 in the series, but this was only his second hit since being thrown out trying to score from second base on a single in Game 5, seen as a key turning point in the World Series. As Brock led off first base, everybody in the ballpark expected him to attempt his eighth stolen base of the series, which would break the record he’d set in 1967 and tied in 1968.

Instead, Lolich caught him too far off first. Brock broke for second, and the Tigers had a 1-3-6 pickoff caught stealing for the inning’s first out. The tag on Brock was applied by Stanley, the club’s center fielder whom Smith brought in to play shortstop in the series. One out later, Curt Flood, who’d singled and stolen second base in the first inning, beat out a single to shortstop. But Lolich nabbed him via a pickoff caught stealing too. The two top basestealers on the majors’ fourth-most-prolific base-stealing team had been set down on the bases.

Gibson retired the first two batters in the seventh inning. He had retired 20 of the 21 Tigers he’d faced to that point. But after singles put runners on first and second, Northrup hit a long fly to center field. Flood, a five-time Gold Glove center fielder, had a hard time picking up the ball, and he stumbled going back on it. The outfield grass had wet spots, and was still recovering from a Cardinals-Cowboys football game four days earlier. The ball landed beyond Flood for a triple, and Detroit had a 2-0 lead. Catcher Bill Freehan followed with a double, only his second hit in the Series, and the Tigers were up 3-0.

Detroit added another run in the top of the ninth inning on three singles. Lolich got Roger Maris (in the last plate appearance of this career) to pop out to Stanley to end the seventh, the first of six straight outs in which the ball didn’t leave the infield. With two down and none on in the last of the ninth, trailing 4-0, Mike Shannon hit a home run for Cardinals, preventing a shutout. But Lolich got Tim McCarver to hit a foul pop-up to Freehan, and the Tigers had their first World Series win since World War II. 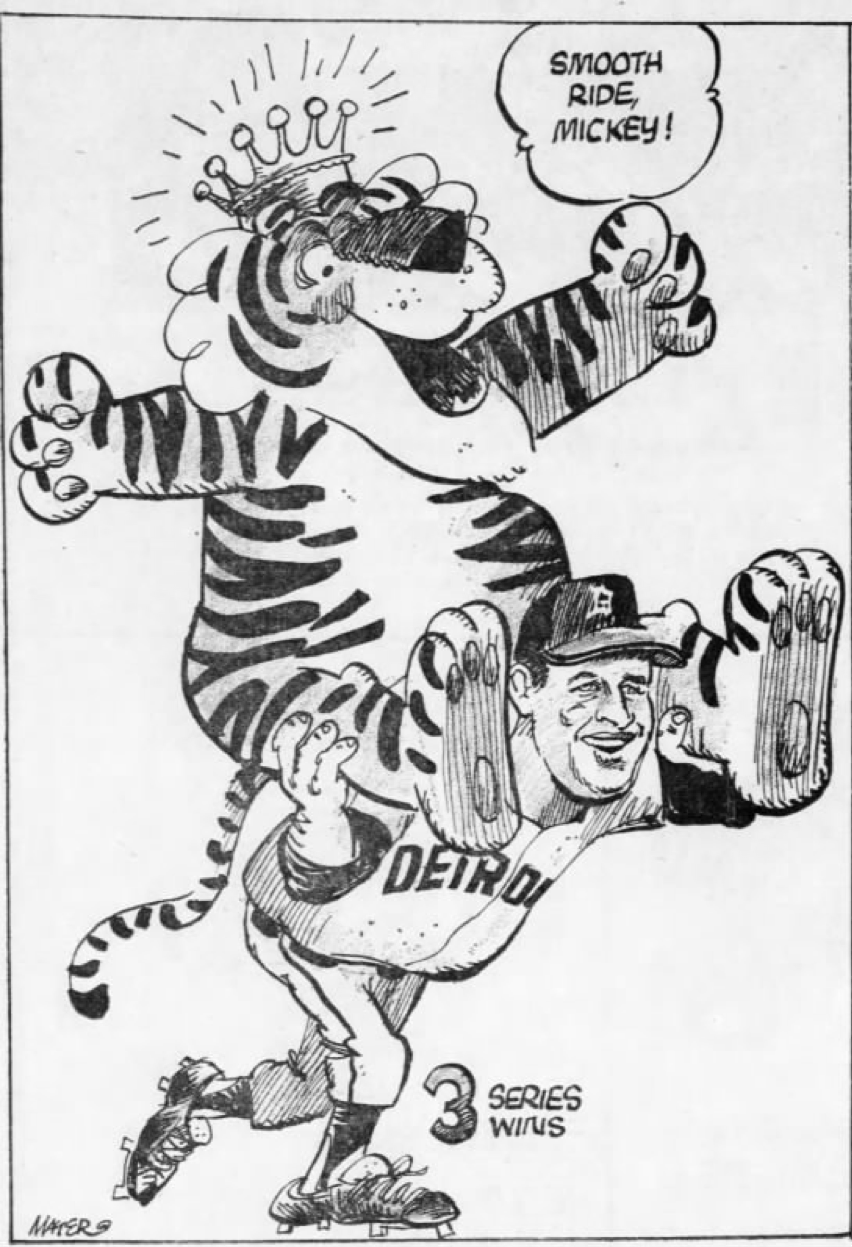 Lolich was the winning pitcher and the World Series MVP. He had three complete-game victories and a 1.67 ERA. He was just the 12th pitcher to get credit for three wins in a World Series. Only Randy Johnson in 2001 has logged three World Series wins since Lolich. Gibson finished with an identical 1.67 ERA, and his 35 strikeouts remain the most in World Series history.

After the World Series ended, Minnesota hired Billy Martin, manager of the club’s Triple-A affiliate in Denver, to take over as manager of the Twins, replacing Cal Ermer. Owner Calvin Griffith declared, “I think Martin has the ability to be another [Casey] Stengel.” Martin would go on to manage the Twins to a division title in 1969, then get fired over disputes with ownership.

In other sports news, the Games of the XIX Olympiad opened in Mexico City on October 12. (Yes, October. It’s hot in Mexico in the middle of summer.) It was the first Olympics in a Spanish-speaking country and competed at altitude (7,350 feet). It was controversial before it started, as it coincided with a student uprising. Ten days before the Games began, President Gustavo Diaz Ordaz sent in 5,000 soldiers to break up a large gathering. Hundreds of students and civilians were killed and over 1,000 arrested.

While the 1968 season was over, this feature isn’t. I’ll review the awards and the expansion draft before wrapping it up.

You need to be logged in to comment. Login or Subscribe
Scott Pelarski
Loved this. You planning on recapping the 1969 season next year? 1919 would also be a good choice.
Reply to Scott
Rob Mains
Thanks, Scott! I'll see how things play out. I was thinking about 1969, but you're right, 1919 was obviously a pivotal year.
Reply to Rob
Michael McKay
Just wanted to let you know how much I have enjoyed this series. Game 7 was my 7th birthday. I happened to be sick, so that game became my first WS memory. Nice to get a chance to relive it.
Reply to Michael
Rob Mains
Wow, what a birthday memory. Thanks for reading it!
Reply to Rob
Adrock
An excellent series. Thanks for your work.
Reply to Adrock
Rob Mains
I really appreciate it Adrock! Glad you liked it.
Reply to Rob