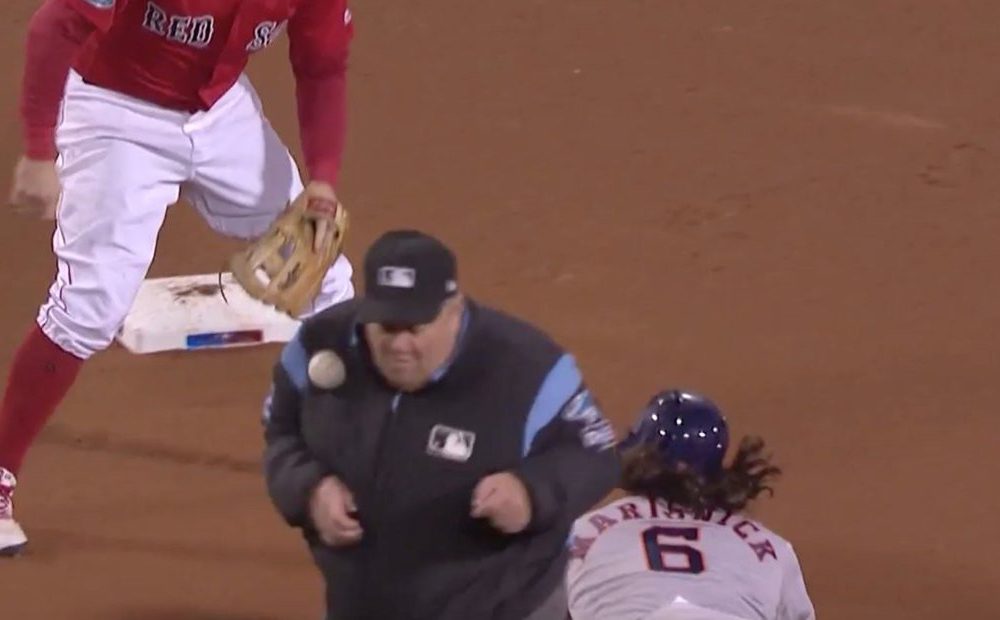 During last night’s ALCS Game 1 between the Astros and Red Sox at Fenway Park, Houston’s Jake Marisnick took off for second base. The Red Sox’s defense sprang into action, and as the throw came down to second, Marisnick went into a head-first dive, losing his helmet and allowing his flowing brown locks to breathe in the autumn air. He was in no danger of being caught stealing, however, as catcher Christian Vazquez’s throw was wide right, where umpire Joe West was standing.

West buckled his arms to his chest and moved with all the agility a cowering Tyrannosaurus. The throw struck him in the right shoulder, but he seemed to absorb the blow and proceeded to simply look around the diamond, expressionless, as though daring everyone else to give it their best shot and try throwing a ball at him, too.

And for a moment, it seemed like they finally had him.

Had Vazquez launched the revolution? “We can do it!” he could have yelled. “C’mon, lads! We don’t have to live like this anymore! We have him surrounded! There’s more of us than there are of him! If we all just …”

But no. Joe West remained undestroyed and undeterred.

This was a night in which West seemed, once again, determined to be noticed. He’d already inspected the mitt of Astros catcher Martin Maldonado for foreign substances, and stepped into a shouting match with Red Sox manager Alex Cora that had originally been a shouting match between Cora and home plate umpire James Hoye. You could credit both of those incidents as general umpiring, but West drags a 20-ton reputation behind him everywhere he goes, through which all of his actions are filtered and then typically complained about.

If you’ve ever watched baseball, you know Joe West. You’ve had over 5,000 chances to get to know him. As you’ve probably guessed, after he got hit with that baseball last night, the sympathy cards came rolling in.

Joe West can’t see that throw coming at him from the catcher, yet we still trust him to call balls and strikes, right?

Christian Vazquez just pegged Joe West with a throw, and Boston will have a parade this October no matter the result of this series

If you don’t care that he’s folksy and that he doesn’t feel respected by the players anymore and that he feels the game has changed over the years—as well as all of the other things we learned about him last year when he was painfully lionized in a Sports Illustrated feature—then to you, he’s just an occasional disruption who appears to love getting in the way (until it hurts).

In that SI feature, West responded to the critique from players that he often makes the game all about himself by saying, “I don’t understand what their complaint is. We’re supposed to run the game. They’re supposed to play it,” which serves as an answer in the same way that hitting an umpire with the ball serves as an out.

At this point, it cannot be argued that West doesn’t crave attention: A TBS broadcaster mentioned during last night’s game that West was a good singer, doing some unsolicited marketing for the 65-year-old trying to balance a professional umpiring career and a country singing career in the chaos of this gig economy. He wants to be known.

Earlier this season, West took issue with the lenses of the TV cameras at Chase Field, and how they were extending slightly over the railing of the camera well. West has never cared about TV cameras before. West will never care about TV cameras again. I would wager that, even as West ordered media professionals to correct a problem of his own creation, West didn’t care about TV cameras in the present, either. It was simply the issue he’d decided to have that day, in that moment, and for whatever reason he decides to do these things when he decides to do them, it seems clear that he’s never going to stop. One of baseball’s wackiest mysteries is the open secret that West is a problematic instigator, yet addressing this is met with head-shaking smiles and “That’s our Joe!” as the studio audience applauds.

So, in the midst of another postseason in which every person hangs on every call, when fan emotions are high and bladders full, when tension is hotter and the air is colder, we are forced to ask ourselves:

What does Joe West want from us?

Does he want our attention, while the baseball game occurs out of focus in the background?

Does he want an assurance that he’ll be remembered?

A drink waiting for him at the end of the bar?

The number of a good shoulder doctor?

In all likelihood, he wants what a lot of people want: To go back to the way things used to be. He wants to be young again. He wants to return to a world he remembers; a place where he was a revered umpire who didn’t have to wear a wristband to fend off verbal attacks and everything made sense.

But last night, with the chill of New England swirling around him as Game 1 of the ALCS entered its fourth hour and a fresh bruise purpling on his shoulder, all Joe West probably wanted was to not get hit by the ball again.

Joe West has resorted to playing the shift. pic.twitter.com/Zzf2VrVFXC

You need to be logged in to comment. Login or Subscribe
The Beef
Yeah, let's not talk about the umpires anymore (well, after I publish this piece cause I got nothing else). I'd love to see the tears streaming down your face when a mlb catcher sets up across the street from your office and puts one right into your starbuck carrying shoulder. Down goes Klugh!
Reply to The