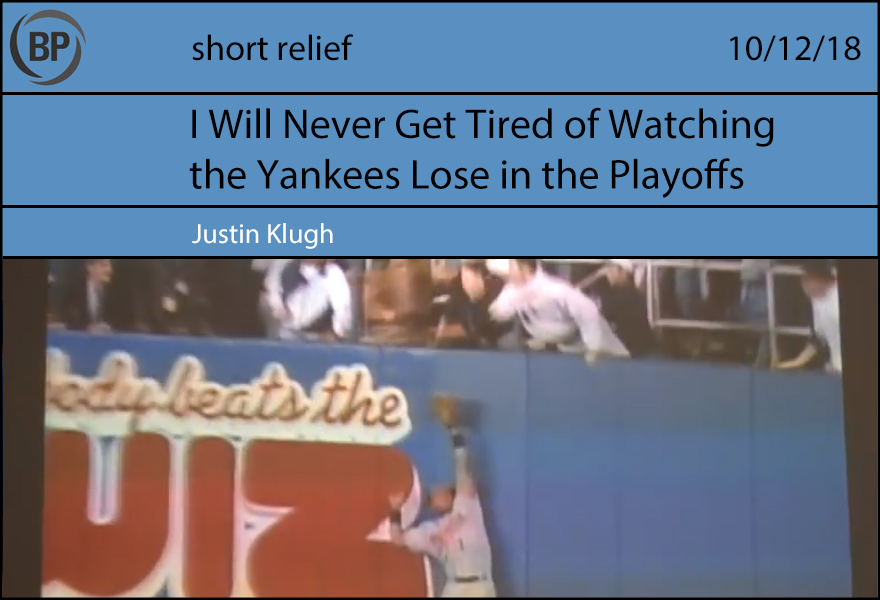 In the old days, autumn was about the stifling, unsurvivable humidity of summer giving way to the brisk breeze of October, which blew gusts of school supplies and various gourds down the streets of our cities, while we cowered inside of our homes, comforted only by the terror and passion of postseason baseball flickering on our televisions.

And in this yearly occurrence, we are forced to watch match-ups of all kinds: historic or fresh, strange or repetitive. Typically, it’s a bracket full of teams in the middle of a successful run, with a surprise or two to root for before their inevitable elimination at the hands of teams using higher payrolls, more sinister practices, or downright cheating. In this way, some teams have built themselves up as looming menaces, crushing the spritely, anything-can-happen spirit of the playoffs by making their victory less earned or deserved and more boring and inescapable.

The 1996-2000 Yankees were such an entity, with their flaccid uniforms, hairless faces, and stoic demeanors, all a pathetic facade that we were supposed to believe was class in its purest form. Alex Rodriguez was the single exception to this, screaming at infielders until they dropped the ball or slapping it out of Bronson Arroyo’s glove. In more recent years, his playing days over, baseball has tried to contain A-Rod by trapping him in a glass cube and calling him a “broadcaster,” but we all know who he is.

My witnessing of the late ‘90s Yankees has made their more recent playoff appearances for more satisfying, as there is nothing greater to cheer for in the MLB postseason than the Yankees being eliminated. Not just losing; not just being blown out in their own stadium while bored celebrities in Yankees hats check Instagram—being eliminated.

I watched Jeffrey Maier catch that fly ball over Tony Tarasco’s head live with my own father in 1996 at 10 years old, and that moment of white hot rage that was shared between us bonded us for life. Watching Derek Jeter jog around the bases with that self-satisfied little smirk while the umpires confidently and loudly got the call completely wrong, and the city of New York touted Jeffrey Maier as some sort of hero for disrupting a live play, something for which people have been getting thrown out of stadiums for generations, was formative for me in exactly the sort of way that people become serial killers. It was my first lesson in futility: You can kick all the LEGO sets in your room out of frustration, but sometimes, the bad guys just win.

I would rather 100 children’s relationships with their fathers (or mothers!) become distant and frayed than watch someone in a Yankees jersey experience even a moment of happiness. There is nothing better for baseball than the Yankees being eliminated. Yankees fans don’t like baseball, or even the Yankees. They like winning, and that’s just not what most baseball is about. It’s about sitting uncomfortably until someone tells you to turn the game off, or keeping track of every inning using a complex series of hieroglyphics until you wonder, “Why am I doing this?” and stop. It’s about a sport begging for your attention, only to black you out of watching the team you want to see.

With the Yankees being eliminated from the playoffs by the Red Sox, there is room cleared for some of baseball’s other historic rivalries, like the Red Sox’ old school self-pitying vs. the Astros’ new school classlessness. Or Angel Hernandez vs. the rules of baseball. Or all of the players vs. Angel Hernandez. And unlike the crack of the bat and the green of the grass, the Yankees making or being eliminated from the playoffs isn’t something that even happens every year. It’s like spotting a meteorite in the summer sky, and then watching that meteorite crash into a house owned by a Yankees player.

As a new era of successful Yankees teams begins, we must treasure the times we’ve had watching them fail. They won’t all end like this, giving us ten precious years since New York last collected its jewelry. Someday, those awful men will take back what they believe to be theirs. And until then, we must celebrate that for a little while, we had some good times as other teams got in the way. Which begs the question: If the Red Sox are our best chance at defeating the Yankees, are we any better off? 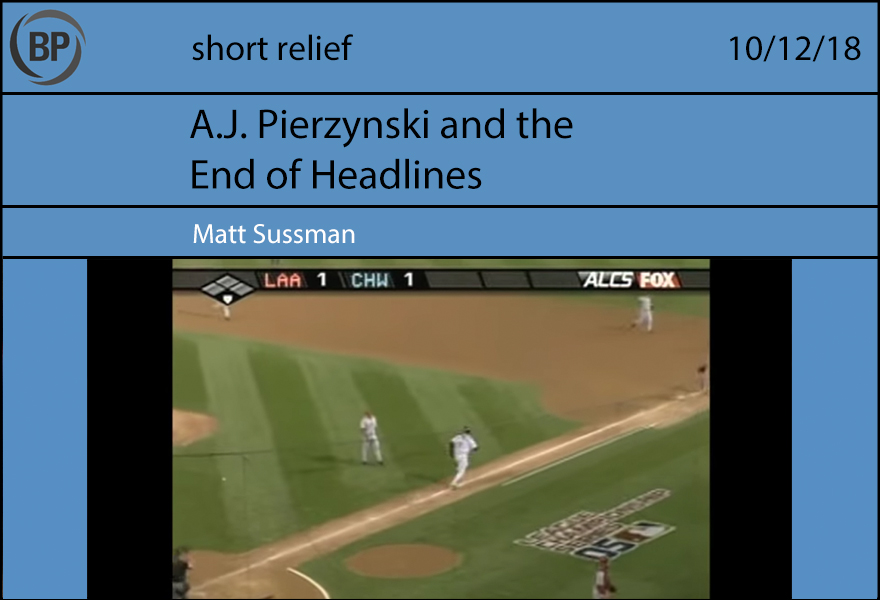 It was a baker’s dozen years ago today that A.J. Pierzynski was credited with one of the more heads-up plays in postseason history, running to first base on that “bounced third strike” that Angels catcher Josh Paul almost certainly caught cleanly, and home plate umpire Doug Eddings almost certainly signaled as an out. However, Pierzynski gave it go, and Eddings let him take first base. Instead of going to the top of the 10th, a pinch runner was inserted and Joe Crede sent ‘em home with a 2-1 win in Game 2 of the ALCS. According to the scrolls, the White Sox won a World Series that year, though nobody remembers this, not even Dustin Hermanson, and that is something Dustin Hermanson would remember.

There are lots of ways to remember this game. It could be the A.J. Pierzynski Game, which I think is the official memory of record. Maybe it was the Doug Eddings Game because he changed the way umpires universally standardized nonverbal strike three signals, although remembering it like that is definitely a substitute for Ambien. During the confusion of the play, Tim McCarver noted how this is a great case for instant replay. However because it only bamboozled the Angels, it didn’t become a discussion point until a similar play jobbed the Yankees, and then video review became a thing.

My second favorite thing about the game was Paul, a backup catcher who played his third and final postseason game. In all three games, he came in either as a defensive replacement or a pinch-runner. He never stepped up to the plate. The only postseason stat he ever accrued was this “error.”

But this game to me has always been, and will always be, the Pun Headline Game. I cannot find evidence of this, despite Googling and then Googling again, but somewhere in America a copyeditor somewhere came up with the October-y headline “THINGS THAT GO UMP IN THE NINTH.” This inspired me, a self-proclaimed headline enjoyer. This all happened a few years before Twitter.com, a website that was designed to take creativity and puree then snort it seconds after opening, and also has dog pictures. You can still take scattershot online posts and publish them onto dead trees for posterity, but only if it is the Dril book.

The most aggravating part is, I have no idea where the headline originated. Much like Paul’s catch, I know it existed yet the official ruling of “your search has returned zero results, also we think you meant ‘bump in the night’” runs contrary to that. I want to say it was the sports page of the … Milwaukee Journal-Sentinel? It might have been in one of those “headlines of the year” by some website like Poynter or some other media thinktank that I read for some reason. I know it exists in print somewhere, though I can’t find it on the Internet. Oh, that’s probably why we stopped putting all the good puns there.

You need to be logged in to comment. Login or Subscribe
Joshua Beach
Hey! I wrote that headline for The Seattle Times. On deadline. With a page redesign assist from a colleague. My personal favorite of my own headlines. The straightforward AP headline is on the story in The Seattle Times archive -- boring! I can't find a "clip" of the original, but I saved this is email for some reason:
Things that go ump in the ninth
ALCS: Chicago 2, Los Angeles 1
Angels say boo to disputed call
By Larry Stone
Seattle Times baseball reporter
CHICAGO — Add these new names to the lore of baseball, the stars of a
bizarre tale they'll be telling and retelling for as long as the game
is played: Josh Paul. A.J. Pierzynski. Doug Eddings. Joe Crede. Kelvim
Escobar. The new Boys of Fame and Infamy.
Reply to Joshua
Matt Sussman
Thank you so much. I knew I didn't dream it. I'm not that good.
Reply to Matt