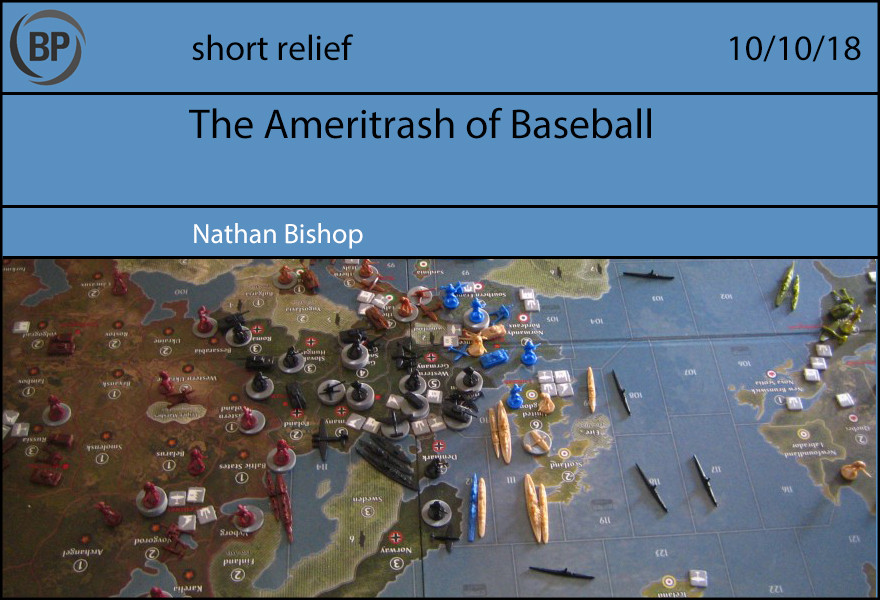 Many popular modern board games feature elegant systems, genius mathematical puzzles, and opportunities to create grand engines of efficiency. In these games, the theming is largely secondary. They are elaborate puzzles, and while you may play them with friends, you will not talk much because all of you will be so focused on being efficient. This style of game, generally speaking, emanates from men with names like Feld, Rosenberg, and Knizia. In board gaming, the genre is known as a “Euro.”

There are other styles, but one of them is lovingly (and mockingly) known as “Ameritrash.” An Ameritrash game offers everything that a euro does not. It belches opulence onto your table. Dozens of decks of cards, plastic miniatures, metal coins, branching storylines, epic adventures. Ameritrash offers you not a puzzle to solve, but an experience to share. They promise theater, spectacle, immersion, and a story that will resonate at least as much (if not more) as whoever wins.

To deliver on this promise, though, these games depend on a level of randomness that can often spit out something laughably silly, right when the story is begging for something dramatic. It’s not uncommon to find yourself in some climactic battle, review your options, make a decision, flip over a card, roll some dice AND…….you’ve taken off that enchanted amulet you got from that witch back in the woods… …and… …thrown it at the Goblin King. Huh.

This is where playoff games between the Red Sox and Yankees enter the narrative. Nothing in baseball, and few things in sport, are as Ameritrashy as October games between New York and Boston. The century of rivalry and cultural ennui looms grandly over the entire spectacle. The games are not taut contests of strategy and efficiency, but overstuffed, overlong storyline generators, with plenty of—Flip over the top card? Oooooo it’s Dave Roberts stealing second base! Roll a 20? It’s Alex Rodriguez batting the ball out of the pitcher’s hand.

It’s all very melodramatic, overly long,  and definitely has some serious feature creep that has been stuffed in over the decades, but the Red Sox vs. Yankees spectacle works for what it is designed to do. Except when it doesn’t. After all, what propels all this theater forward behind the scenes is the rusty, 150-year-old guts and gears of baseball itself. The game isn’t designed to produce drama, or storylines, or unforgettable moments. It’s just nine innings, 27 outs to a side, a procedural. At times, that skeletal framework will allow us to build some of the most famous moments in American sport onto it. Baseball doesn’t care about any of that, however, and will thoughtlessly spill out a 16-1, cold and rain-filled slog, just as it did Monday night in New York. When the story is more important than the game, you’re always a few bad dice rolls from a wasted evening. 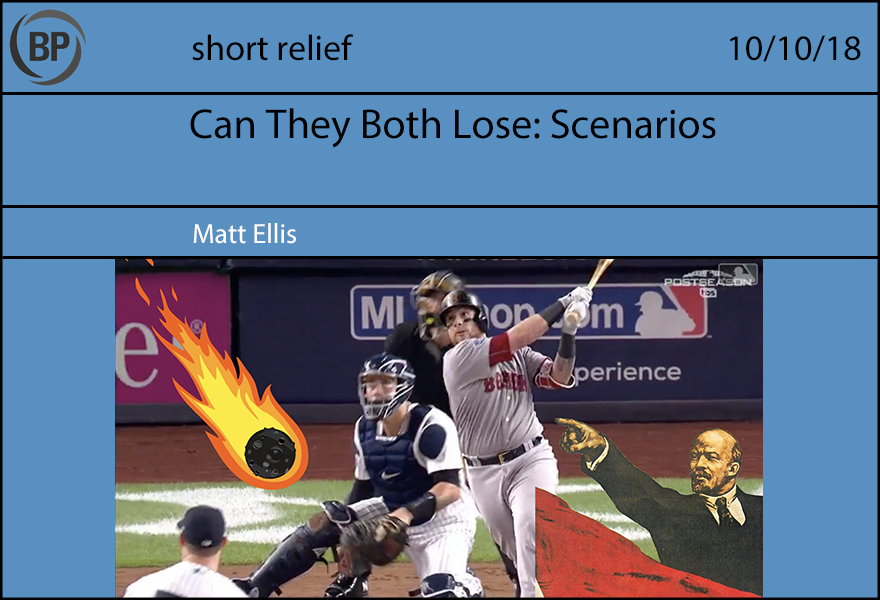 Fredric Jameson—or someone else, I don’t know—once said it was easier to imagine the end of the world than the end of Capitalism. In a sense, I think the same could be said about the Yankees-Red Sox rivalry. Those of us not in the area scoff and roll our eyes at yet another seasoned narrative, seasoned like when you get your Boomer dad’s steak doused in pepper and cooked until well done, seasoned because it didn’t plop down on the grill naked but well, there’s some stuff on that. You hear me?

The “can they both lose” mentality isn’t just me—I’ve seen it pop up on twitter more than once since this series started. Of course, the real horror for those of us not beholden to this geographical region lies in the fact that actually these teams are really fun: the Yankees have some dang exciting young kids hitting 700-foot dingers, the Red Sox are averaging something like an .820 BA. So why does it feel like we need something else, the asteroid to break through our Francis Fukuyama End of History nightmare, the same one that damned us in the ’90s to face the destruction of democracy in the second decade of the 21st? Some options to fix this:

This one, I admit, is not nearly as exciting as it should be. Films like Deep Impact and Armageddon are just as ridiculous for their infeasibility as they are for proposing some actually thinkable series of events that could shake our historical imaginary out of its post-Cold War slumber. And yet, there is something truly freeing about thinking the big rock coming in and ending it all. Doesn’t work tho: Aaron Judge cannot be stopped by a rock slinging in from space; he sends rocks flinging into space. Advantage Yankees, here.

Uh, there’s a Dinosaur. MLB Network has to air Brewers games. From here on out. Tell me you want something else. Raptors are the good guys, no Drake.

This one is a little more controversial, as the plague that almost ended Europe and Western Civilization as we know it isn’t exactly something that we want to relive again. But as many modern historians detail, the rebuilding following the Black Death plague may just be precisely the rejuvenating aspect that led to the renaissance, and we could certainly use another one of those lately. Without Twitter this time, because, lord.

Hear me out: I know I read too much Lenin and have faith in the dictatorship of the proletariat, but what if we just banished both teams? We let them finish out this series, play to the end, the Red Sox win on a Mookie Betts walk off, then we send down a lower-level functionary (we don’t have hierarchies in the socialist utopia) to announce that both teams are cancelled, and their respective playoff spot is given to the Seattle Mariners. Show me the fault in this logic and I will concede my ability to write about baseball for the rest of my life. It’s flawless.