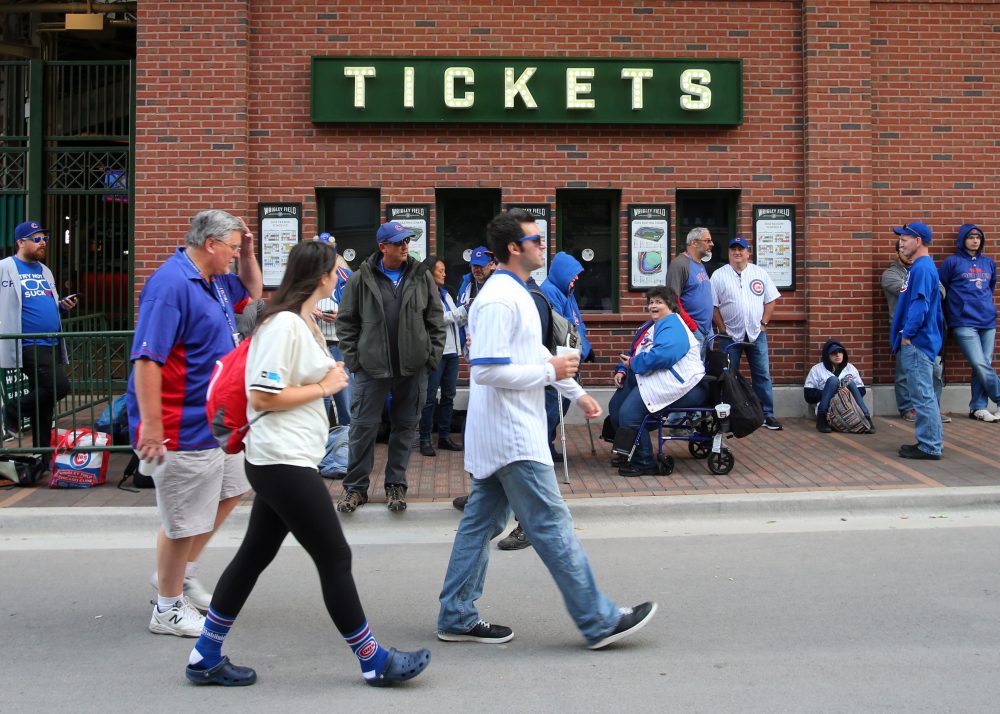 As I’m sure you’ve heard, attendance across Major League Baseball was down this year.

Now, it’s entirely possible that this isn’t a concern for some teams. Let’s say you’re the Giants. Last year, San Francisco drew an average of 40,786 fans per game. This year, it fell to 38,965, a decline of 4.5 percent. That decline is going to be the headline. But let’s say—I’m making this up, just as a hypothetical example—the Giants raised average ticket prices by 6.0 percent. That’s probably part of the cause for the decline; the games became too expensive for some people. As a result, the people showing up at the ballpark were, on the margin, slightly wealthier. So maybe they spent, on average, 5.0 percent more per head on concessions than fans did in 2017. And with fewer people at the ballpark, the team didn’t need as many ushers, concessions workers, and postgame cleaners.

The point is, it isn’t hard to see how a team experiencing a decline in attendance could actually make more money than it did when the ballpark was more full. A lower gate may not be a good long-term strategy—potential lifetime fans don’t get introduced to the game—but it can work in the short term. But let’s ignore that for now, since the teams aren’t going to release the financial data we’d need to judge its veracity. Instead, let’s look at attendance by itself, not its ripple effect on other aspects of a team’s operations.

There are three excuses, for lack of a better term, that you hear for the decline in attendance:

To evaluate the attendance trends and potentially filter out these effects, I looked at each team’s average attendance per month in 2017 and 2018, and calculated the change. This isn’t a perfect measure. If you’re the Rays, you’re going to draw more fans during a month that the Yankees and Red Sox are in town compared to the Orioles and Blue Jays. Being home for holiday weekends should bring in more people than being home for a two-day weekend. Weather, promotions, and competing events in town can all affect the numbers.

When I tell you, as I’m going to, that the Angels’ attendance was down 10 percent in June and three percent in July but up four percent in August, there are a lot of things that go into that (for example, the absence of certain designated hitter from the lineup from June 4 through July 2), and they might be skewing the numbers.

I’m going to start with two graphs. These show the change in average attendance per game, per month, and per team. These are really busy graphs. You may not get a lot out of them. I’ll show you the data in tabular form in a bit; that might be easier to read. 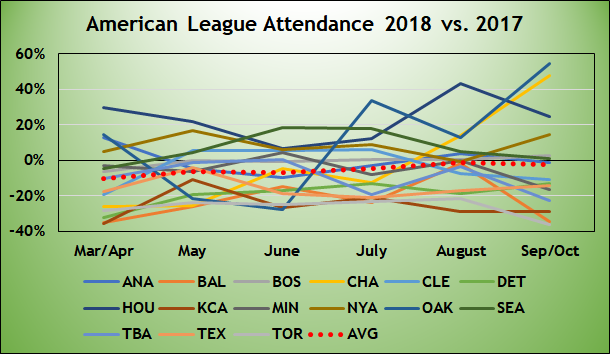 (Note: Throughout this analysis, AVG (the dotted red line) refers to the average of the 15 teams. It does not refer to the overall total.)

I think the National League graph is amusing. 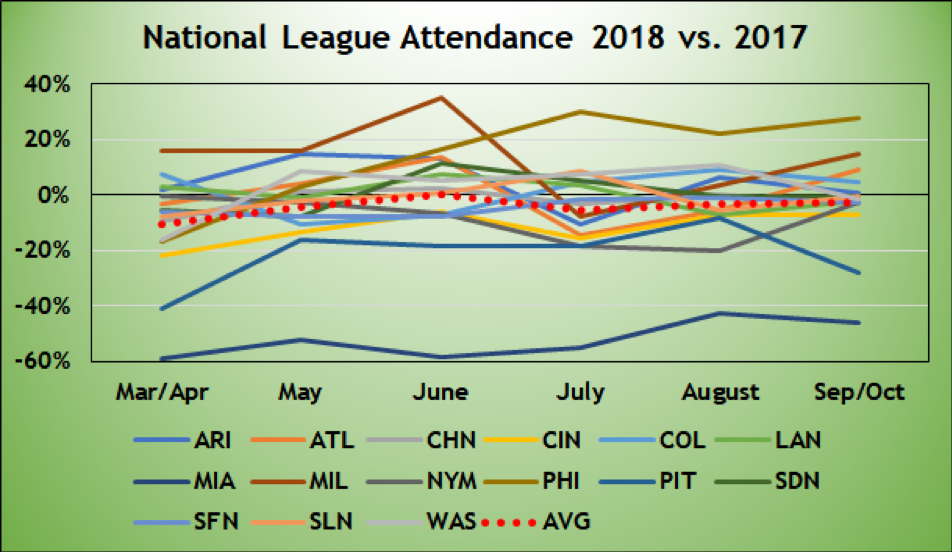 No team in the NL spun the turnstiles compared to 2017 the way the A’s did in the AL, but the Phillies (brown line) and Brewers (dark red line) had consistent gains. But man, did the NL ever have a team that had a bad year at the gate. Meet the 2018 Marlins.

Look at that last row, the average of the 15 teams. April really was awful, and things improved as the year went on. If I exclude the obviously-not-in-contention Orioles, White Sox, Tigers, and Royals, there’s no month in which the average decline is more than 3.8 percent, and July and August showed slight increases. Take away the turned-out-to-not-be-in-contention Blue Jays and Rangers, and the average team attendance increased in each month.

A similar pattern is evident in the National League.

Same as the AL: A rough start to the season and no more than a modest dip over the summer months. Going into the season, it was very clear that the Reds, Marlins, and Padres weren’t going to be in contention for anything. Just removing those three teams reduces the decline in March/April to 6.2 percent and the decline in July to 1.8 percent. Every other month was up compared to 2017.

I think there are five takeaways here.

The early season really was awful. Attendance was down at a double-digit rate in March/April, and the declines were widespread enough, from the mighty Red Sox and Cubs to the execrable Marlins and Tigers, that it probably has a lot to do with weather.

The attendance picture improved over the summer. The worst month was March/April, and the second-worst was May (though July was no prize). The attendance comparisons were at their best during the last two months of the year despite a general lack of compelling pennant races (not that 2017 had any).

A few teams really trashed the numbers. The Orioles, Royals, Blue Jays, and Pirates had 20-plus-percent declines, and the Marlins were off by a cover-your-eyes 49 percent. Take those five teams away and the average NL team’s attendance rose in four of the six months, and the average AL team’s attendance rose in three of the six months. And overall MLB attendance would swing from -4.1 percent to +0.1 percent. Note, however, that this is a somewhat specious argument; there are always teams that do poorly in a given season, prompting fans to stay away.

The concern may be more long term than short term. There’s no question that, even adjusting for the brutal spring and the number of noncompetitive teams, 2018 attendance was disappointing. But as pointed out earlier, that doesn’t necessarily impugn the financial health of the industry. It’s entirely possible to make more money with fewer fans.

The risk to baseball is what fewer fans today mean for the industry further down the road. It’s unclear whether consumers of the sport need regular visits to the ballpark to sustain their enthusiasm. Lower attendance may coexist with sustained fan interest. On the other hand, to pick a sports analogy, the rise of snowboarding was the salvation of the snow sports industry, as the number of riders more than doubled between the winters of 1996/1997 and 2009/2010. Resort owners, capitalizing on the demand, jacked up lift ticket prices, and the number of active participants has declined by 13 percent since that 2009/2010 peak.[1]

So the decline in attendance in 2018 is less dire than the headlines suggest, and doesn’t necessarily correlate to decreased interest among fans (or profits for teams). What it means beyond 2018? Hard to tell.

You need to be logged in to comment. Login or Subscribe
David Mirza
The Cubs visiting the Sox in September had a lot to do with their September spike.
Reply to David
Rob Mains
Good point, David. Example of why you can't put *too* much weight in monthly figures. Still, take away those three games, and the Sox were still up 26% in Sep, though again, it's more a case of attendance not falling off the table this year as it did in 2017.
Reply to Rob
Pat Folz
Something I am wondering - I notice both leagues seem to have a bit of a mid-season swoon - did you (or anyone) try correlating attendance with heat index or temperature? There was a heat wave this summer, and really the last 4-5 summers have been very unpleasant where I live - it's a fine line between "kick back with a couple cold ones at the ballpark" weather and "if I leave my dark air-conditioned apartment for even a second I will combust" weather.

Regardless, thanks for the great article! I wish people would dig into the attendance issue more - it seems like whenever the discussion comes up you just get one camp yelling "ZOMG BASEBALL IS DYING!" and another yelling back "they're richer than ever, everything is peachy!" The truth of course is more complicated - and I share your concern about the long-term impact.
Reply to Pat
Rob Mains
Thanks Pat. Nice point about the weather. It really did get hot. As for the issue itself, yeah, pretty hard to parse it. I'd be curious about the number of people watching on cable + MLB TV but we won't get those numbers.
Reply to Rob
William Fletcher
Just my own anecdotal experience, but games cost too much money. It's effecting all sports, Football locally is $150-200 for decent tickets, not good tickets, decent ones. I can take my family of four to a baseball game but even mediocre tickets are $34-55, so I end up coughing up some 200 bucks plus concessions, parking, etc.

When we can stay home and watch it in HD, it's a hard sell...
Reply to William
Rob Mains
Easy suggestion: move to Florida. Better answer: If you and I don't go to games it's OK because we're still fans. Whether that affects the allegiance of more casual fans seems to be the question.
Reply to Rob
Todd Tomasic
Pittsburgh has lost about 1 million since the three winning years (2013,14,15). A lot of it
this year was was the dealing away of their only stars-McCutchen & Cole. Many complained
about how dull they were to watch...
Reply to Todd
Rob Mains
Yeah, Todd, what happened to Pittsburgh is not really a surprise. I don't know that they're dull--Taillon and Williams took a step forward, they added Archer, and team was better than last year's--but for sure, the preseason trades and ownership's bs justification for them was effectively waving their middle finger at the fans.
Reply to Rob
Bruce Rothstein
Although the biggest single factor in the attendance decline for the Rangers this year was that they were never in the pennant race, another contributing factor was a brutally hot summer (there was a long stretch of games with 100+ temperatures game time temperatures above 100, including one, that I was at, starting at a scorching 109). Just the effect on Sunday day game attendance during July and August will be enough to be noticeable once the new retractable dome stadium opens in 2020.

Also perhaps worth noting is that May looking better than other months for the Rangers is largely an artifact of a scheduling fluke in which both the Yankees and Red Sox made their only visits to Arlington that month in 2018, as opposed to 2017 when the Padres, A's, Philles and Tampa were the visiting teams.
Reply to Bruce