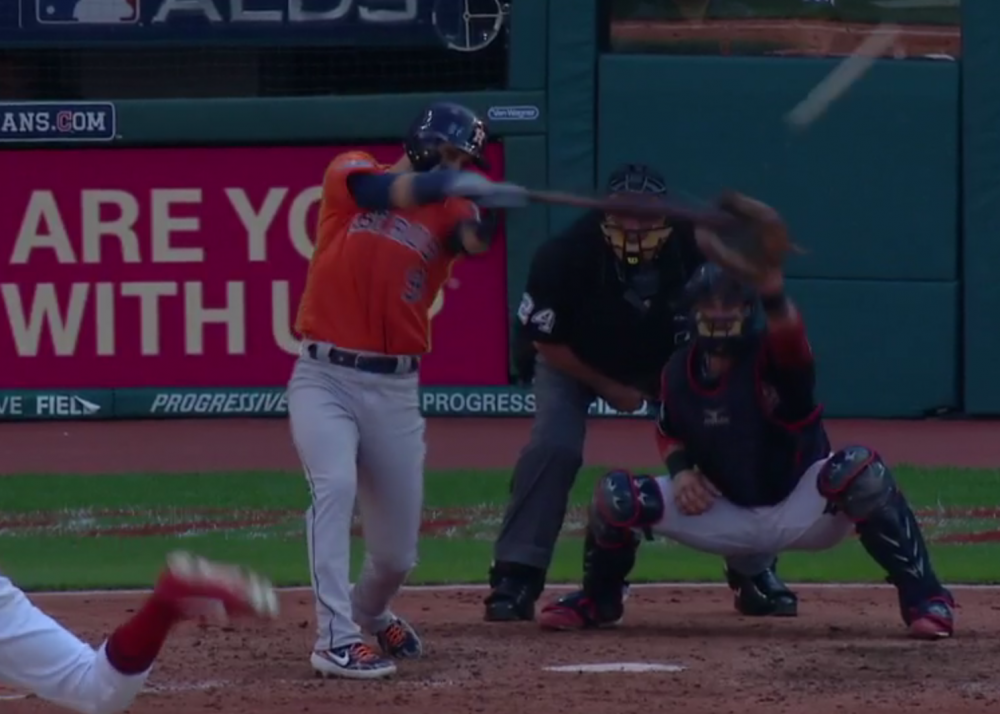 For a few innings there, it seemed like they were going to live another day. Cleveland scored first against Dallas Keuchel in the bottom of the third inning—after the eighth and ninth hitters reached on singles, Francisco Lindor mysteriously chose to bunt them over, and Michael Brantley hit a deep fly ball to center field to score the one run. Prior to this game, the team that scored first had been 11-1 in this postseason. The one loss belonged to Cleveland—Lindor gave them the lead on a solo shot in the third inning of Saturday’s game, which they went on to lose 3-1. The feeling of confidence was perhaps a little unearned.

But it was a beautiful afternoon. The sun was shining down on the field, and Mike Clevinger, the pitcher they call Sunshine, was dealing. Apart from an error of his own in the top of the third inning, he looked almost unassailable. A few too many walks, maybe, but the strikeouts piled up around them. Clevinger did his strange little routine on the mound, with the tapping feet, the rocking back and forth, the quick hold and the release, limbs and long hair flying toward the plate; the Astros, with very few exceptions, did little in response.

An Alex Bregman double in the first inning off a middle-middle fastball, a Jose Altuve single on a curveball scooped from the bottom of the zone in the second inning—for most of his outing, those were the extent of the solid contact made against Clevinger. As long as he stayed out of his own way, he looked golden.

And for the most part, he did. George Springer finally got Clevinger for a run in the top of the fifth, with a soaring home run of the sort Springer has made a habit out of hitting in the postseason. But in the bottom of the fifth, Lindor gave Cleveland back their lead with a homer of his own: crushed 446 feet into the left-field seats, into the waiting arms of the fans.

Francisco Lindor does not want to get swept pic.twitter.com/TSxafMSwir

As the face of the franchise rounded the bases, arms raised, flashing that smile—you could accept that home run as the run that would win this game, that would extend the series another day. It had been a miserable series for them, after all, full of errors, poor performances, and missed opportunities. Cleveland had lost eight straight potential elimination games. They’d been eliminated at home two seasons in a row, after blowing a 3-1 World Series lead and a 2-0 Division Series lead. One day of joy seemed reasonable, one fine day at their home ballpark, allowing for a little bit of hope, a little bit of celebration.

The Astros had Justin Verlander, ready to wield in any potential elimination game. The Astros had more talent, more confidence, a better season. A win in this game probably wouldn’t lead to a miraculous 2-0 comeback—what Cleveland had done to them last season by the Yankees. But it was Lindor, and it was a beautiful home run, and it was such a lovely afternoon.

Both sides went down in order in the sixth inning. As Trevor Bauer came out to begin his second inning of relief in the top of the seventh, though the sky was still bright and clear, the shadows had begun to stretch across the infield. 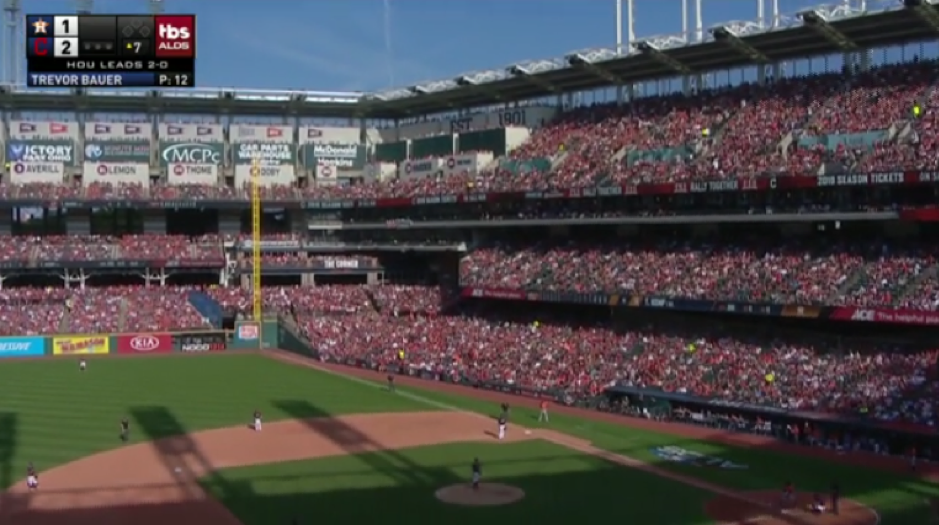 Tony Kemp lined a single into right field on Bauer’s first pitch of the inning, which brought Springer to the plate. Bauer got ahead of him with a tight curveball; Bauer paused, adjusting his cap, wiping the sweat from his brow. After that, the unraveling began. 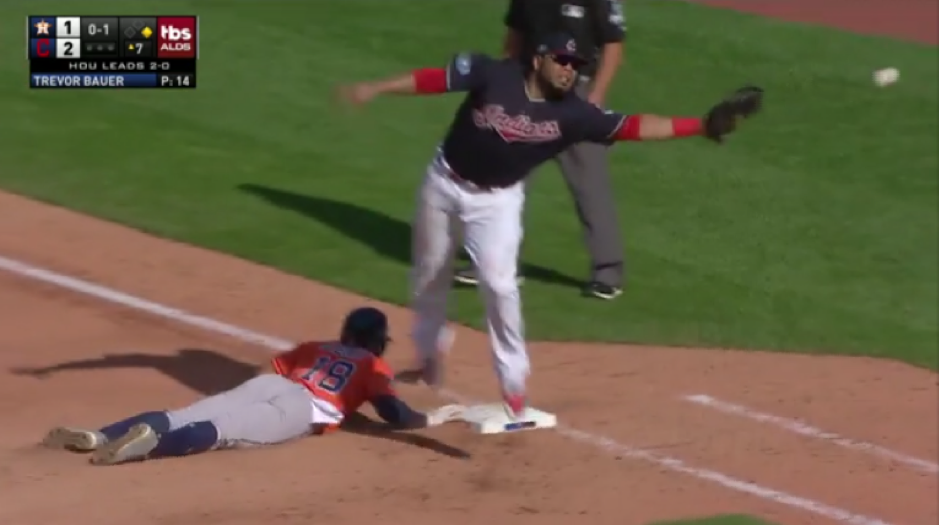 This was the second errant pickoff throw of the day for Cleveland pitching. Unlike the error made by Clevinger, Bauer’s throw wasn’t even close. The ball careened off Edwin Encarnacion’s glove and into the stands; Kemp, who hadn’t seemed in a hurry to go anywhere in the first place, ambled to second base. Springer worked the count full, then tapped a ball just in front of the plate, perfectly placed to be unfieldable. Springer himself seemed tickled by the fact that he was safe. There were runners on the corners now, with nobody out, and Jose Altuve at the plate.

The outcome was around as good as it could get, given the situation: Altuve, behind 1-2, reached for a curveball down and away, grounding it softly to shortstop. While the out at second base was recorded, though, the play developed too slowly to record the out at first. Another ball trickled past first, into the first base coach’s box. The game was now tied, and instead of having the bases empty with two outs, there was a runner on first with one out. Another opportunity given to the Astros—and more specifically to Alex Bregman, he of the two home runs and .667/.833/1.000 slash line in the current postseason.

Bregman tapped it back to the mound. It was exactly the play they needed. Bauer, with plenty of time, threw the ball away for a second time. While Lindor managed to corral the errant throw, it took him off the bag at second, and left him too late to make a play at first. Another double-play opportunity, another misplay. Yulieski Gurriel walked to load the bases. And given how unlikely the events of the inning were—the number of errors, the perfectly-placed weak contact—that Marwin Gonzalez dealt Cleveland their death blow on a pitch above his head, shooting the would-be ball four into left field and clearing the bases, made sense in some way. Of course it would be a pitch that even Gonzales couldn’t believe he hit fair that brought an end to it all. 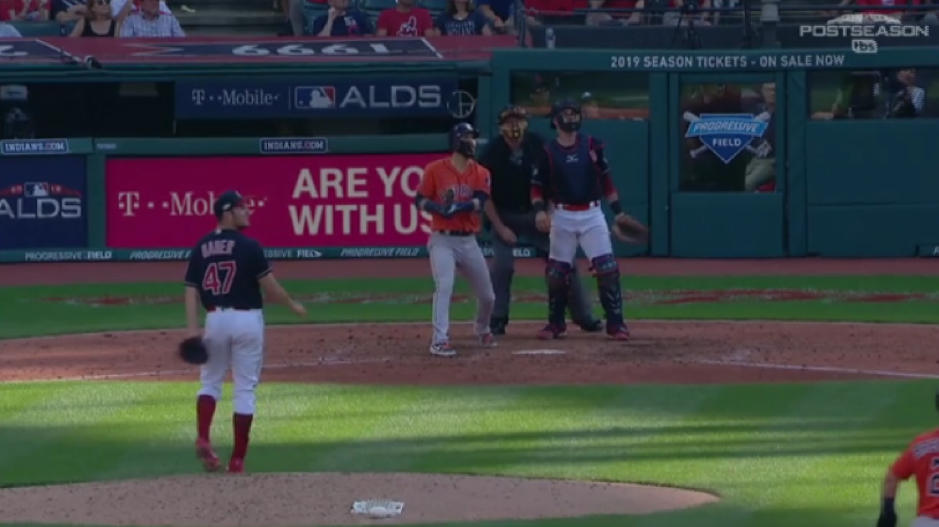 The 4-2 lead would balloon to an 11-3 bludgeoning over the next two innings, following a series of extended bullpen catastrophes. But all of those runs amounted to little more than kicking a corpse. Four runs was all the Astros needed.

The decisive Game 3 of this series was a sublimation of the way that the entire series unfolded. The Astros came through when they needed to; their ace pitching was suitably ace-like, their stars managed to drive in runs, and all was well. For Cleveland, nothing went well. Their ace was given too long a leash, and performed poorly. When their starters were given quick hooks, every bullpen move was the wrong bullpen move. Their defense was sloppy, and save for Lindor, none of their ostensible heavy hitters did much hitting. Jose Ramirez was 0-for-11. Josh Donaldson, Edwin Encarnacion, and Jason Kipnis had one hit each. Cleveland looked like a team en route to a quick exit, like a team that didn’t belong. The Astros looked like a team en route to the World Series.

There was no doubt that the Astros were a stronger team, and there was no doubt that the AL Central was the weakest division. This series, though, for as much as it had a heavy favorite, didn’t have to be as uncompetitive as it was. It didn’t have to end with such a pathetic display. The game had been going so well. They had so many chances to staunch the bleeding. But the shadows fell on Progressive Field, another autumn afternoon fading, and for the third year in a row, Cleveland’s postseason ended at home—this time, without even a fight.

You need to be logged in to comment. Login or Subscribe
Jim Maher
As a Tribe fan, I thought we were sloppy all year. Relief pitching, which had been a strength the last few years, required a valium every time a starter was pulled this year. And the hitting was pretty good all year, but not dominant. The starters were terrific. But just like last year when we got to the playoffs the Indians" hitters forgot how to not swing at bad pitches, the fielding got shaky, and the team fell apart. while they have the players to win the division the next couple years, I have trouble imagining any confidence in the playoffs in the next few years.
Reply to Jim