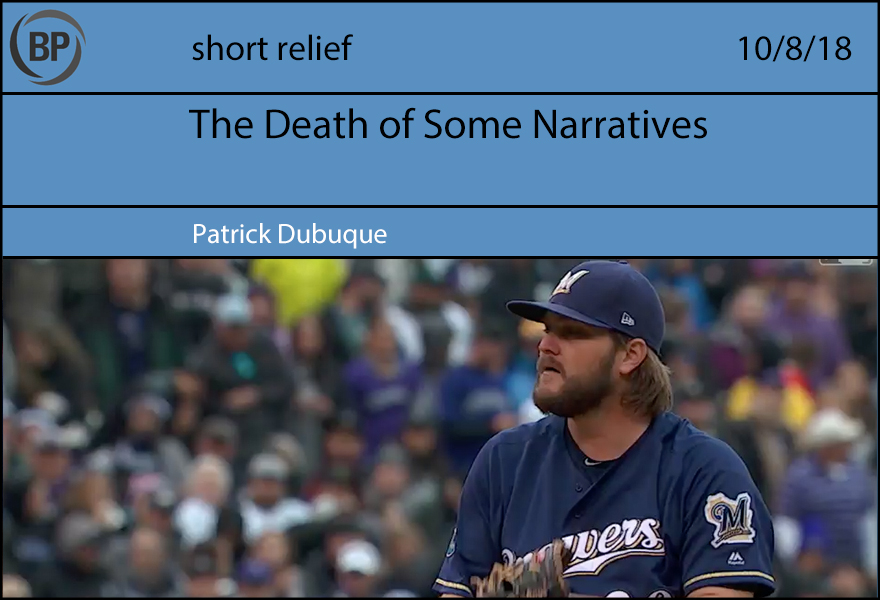 One of the things I like about being a writer is that you can always keep everything. Artists and sculptors have to mine their own souls, transfer that material into physical form, and then give it away to other people. Musicians and actors can record themselves, sure, but their performances are trapped in that moment in time, the documentation a mere facsimile of the experience. Only writers are allowed a full copy of their own magic intact. Unless they happen to be writing about Wade Miley.

I have nothing against Wade Miley as a person. By all reports he is a popular teammate, outgoing and thoughtful. He appears to work no less hard at being a major league baseball player than the others. Aesthetically speaking, it’s not really my kind of look, between the beard set to “voluminous” and the pitching delivery where each throw it looks like he’s being shoved by God. But that’s fine; I’m fully aware that Wade Miley is not performing on my behalf.

The problem is that this Wade Miley, with his human capacity for change and growth, is murdering my Wade Miley, the source of some of my good content. Was it fair when I apparently described him, in 2015, as “a broken sidewalk, a handful of metal coins buried in the ash of a burned out house”? Probably not, but man, it was a good line. Or when I wrote what I felt was a really solid research article about his pitching habits just last year, describing him as “a middling opening act for a headline band that never takes the stage.”

In the middle of that piece, I confessed that the value of my own insight could go out of date at any moment, that pitchers can reinvent themselves at will. I even note that Miley was tinkering with a cutter, the same that he mentions in the video linked above as essentially saving his career and soaking his clothing with champagne. As they cheered, the awful truth hung behind it: that all art decays, all history is overwritten, that all truths either become untrue or unimportant. The narrative of my Wade Miley essentially died for good on this play:

The exact moment: the crack of the bat, and Miley spins around out of his delivery, both feet slightly off the ground, like a gunfighter waiting to see if he’s been shot. He has been shot so many times before. But the ball rolls slowly and Shaw has plenty of time to make the out and end the Rockies’ only threat. Wade Miley, the only remaining Wade Miley, threw 4.2 innings of shutout ball. And the hitter who couldn’t get the hit: Tony Wolters, another short-time hero, another narrative killed. And so many good words along with it. 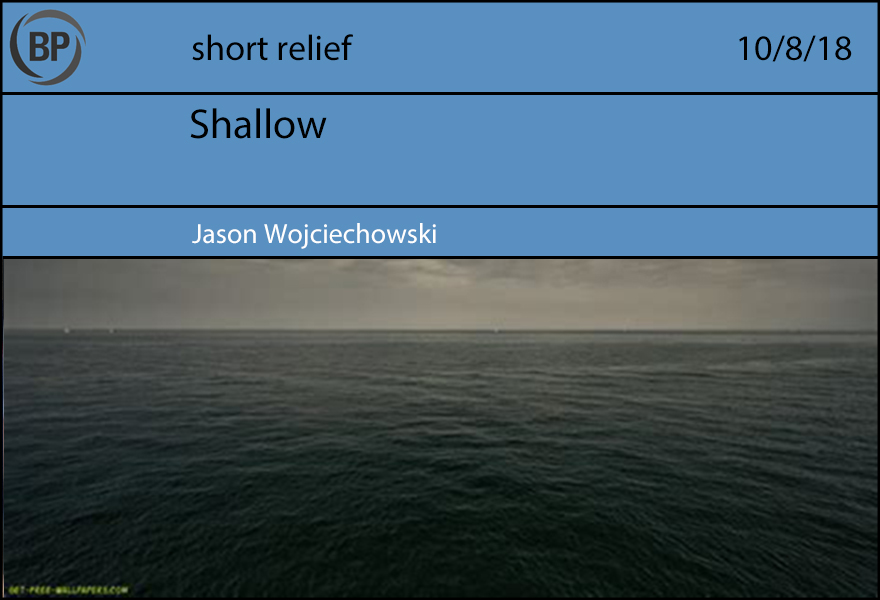 Why, no, now that you ask, I’m not happy in this modern world; and as long as we’re talking about it, yes, I am tired trying to fill that void. I appreciate your concern, and I thank you for inquiring.

Bad enough, the guilt of distraction and amusement, when at least one is distracted, is amused. But when you know deep in your heart that the Dwayne “The Rock” Johnson-starring HBO show that you love has no artistic merit whatsoever, when the massive-hit romcom that everyone else loves deeply leaves you cold, when the baseball squad to which you have pinned your fall hopes does what they always do—washes out in the early part of the playoffs—well, what then? What’s my defense for wasting 30 minutes every Sunday, two hours of Saturday night, or scores of evenings and weekends throughout the spring and summer if that time, which I could have spent contributing to the well-being of others, didn’t even successfully cause my own selfish happiness quotient to increase? Did not fill the void?

It’s luck of the draw, sure. The NBC sitcom about life after death is good; the Oakland indie film about an ex-con mover is one of the best I’ve seen in a while. So maybe my luck will turn. Maybe next year, for my ballclub of choice. If, anyway, there is a next year, a next movie, a next episode of TV. It’s a big “if.” We may well be off the deep end. 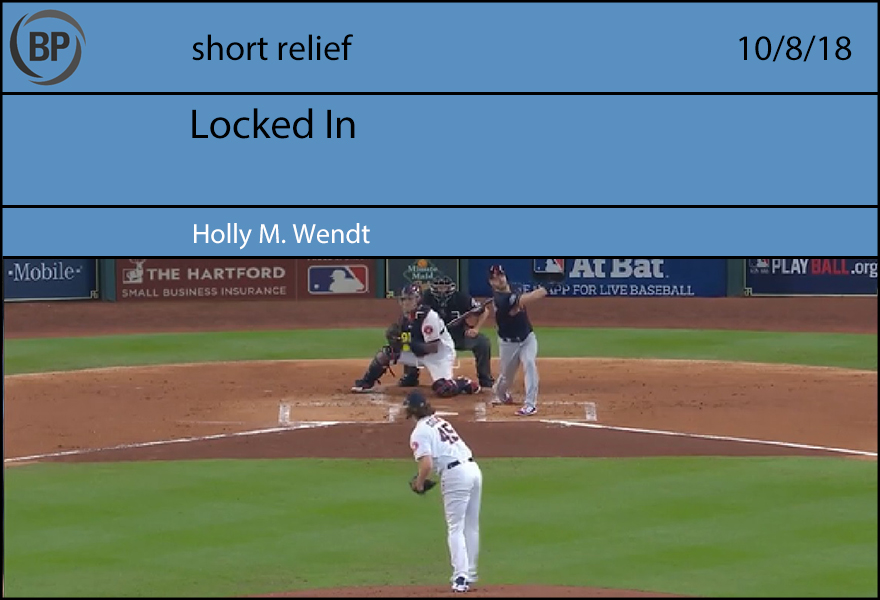 In the fifth inning of Saturday’s Cleveland-Houston game, I got up to make something to eat, namely, to reheat some leftovers—a premeditated dinner plan meant to minimize the distractions during playoff baseball. I put the food in a small pan, set it to heat gently on the stove with the lid to another pan over it. In less than one full plate appearance, the lid had firmly sealed itself to the pan, dinner trapped between.

It’s a physics problem: a lid of a slightly smaller circumference than the pan expands under heat and effectively seals the two together. The trick, then, without resulting to forces likely to damage pan or lid, is to chill the whole apparatus and then hope re-heating the pan causes it to expand before the lid does (or hope the trapped steam creates enough pressure to pop the seal from the inside).

After a farce of cooling and heating cycles spanning the bottom of the fifth to the second of Cleveland’s two sixth-inning pitching changes, pan and lid finally separated. The damages? Cleveland lost its one-run lead and I still didn’t have dinner. The dinner circumstances were settled easily (more heating, sans lid), but Cleveland couldn’t muster any offense past Francisco Lindor’s third-inning solo shot. Alex Bregman’s seventh-inning blast proved to be only icing.

Saturday’s game was the first complete game involving these two teams I watched all season, one of a bare handful of American League games for me all told. For that reason, though it’s October, the view felt new. It wasn’t simply the difference in the light—the roof closed on Minute Maid Park and how different the cast without night hanging over all—and it wasn’t only my naïve surprise at Cleveland still wearing those hats and that patch on this most visible stage. It was also the first time I’d been able to watch a complete Gerrit Cole start since his days in Pittsburgh, the first in such a significant spot since the 2015 Wild Card game that ended so much differently. On an evening with one puzzle of heat and pressure in my own hands and another played out on a baseball field 1,500 miles away, I’ll credit all those swinging strikeouts for solving both.