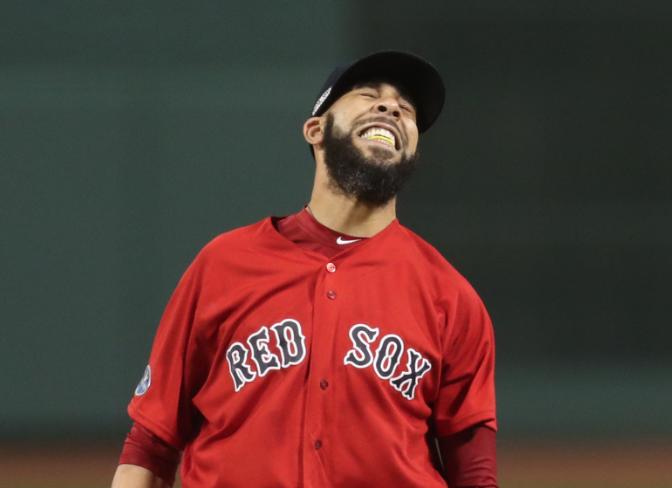 1. What can you do about a home run like this?

Like in September 2010, when with the Yankees and the Rays neck and neck, Price propelled the Rays to their second division championship in three years with a run of stellar performances. He allowed only eight earned runs over six starts and a relief appearance. Or like Game 163 in 2013, when he pitched a two-run complete game. Or like the 2015 stretch run, when his trade deadline arrival on the surging Blue Jays helped end a playoff drought over two decades old.

3. It’s just this month, for whatever reason. Control is one of the most desirable qualities in a pitcher. For whatever reason, starts in October seem to be cosmically out of Price’s control. In postseason relief appearances, he has a 2.35 ERA. That’s more in line with the pitcher he has proven himself to be. In postseason starts, though, his ERA is almost three times that. His first postseason start was all the way back in 2010 — Game One of the ALDS, his Rays against the Texas Rangers. He pitched into the seventh. He struck out eight and walked none. But he allowed four earned runs and one unearned run. The Rays lost 5-1. He pitched again in Game 5, again throwing six full innings, and this time allowing just three earned runs. Not a glittering line, but a quality start. The Rays again lost 5-1, and with that, they were eliminated.

The most run support Price has gotten in a postseason start is four runs. That happened only once. He pitched seven innings, allowed seven earned runs. It was 2013. He was facing the Red Sox.

4. Price joked that he was saving all his postseason wins for the Red Sox. He made his first postseason start for the Red Sox in Game One of the 2016 ALDS. He didn’t make it out of the fourth inning. He gave up five runs.

Price didn’t start in the postseason for the Red Sox a year ago. He pitched 6 ⅔ innings in relief and he didn’t allow a run. The Red Sox lost the ALDS to the Astros, three games to one.

5. Aaron Judge was the test. There he stood, the towering embodiment of all the Yankees power. One out, nobody on, the top of the first. He’d hit two home runs in two games this postseason. Price retiring Judge would show he had some modicum of control over this game. It would offer something to cheer for — our guy can beat your best guy! — and some concrete reason for hope: If he could get through the first inning, maybe he could make it through the inning after that, and then maybe another.

Judge launched it into the stratosphere, over the Monster. Leading off the next inning, so did Sanchez. Two walks and an RBI single later, Price’s first postseason start at Fenway also turned out to be his shortest. He walked off the field in the middle of the second, eyes downcast, the boos raining down on his back. It was only three runs, but for some reason, those three runs seemed like an insurmountable deficit.

6. The Red Sox managed to score only two runs in Game 2.

7. Most people have had the experience of failing repeatedly to achieve something. Particularly something you really want to achieve, and particularly something you know to be achievable. The first time stings — still buoyed by the excitement of trying something you’ve never tried before, even if the task is difficult and even as you brace yourself for it, you don’t truly expect failure. But the hurt is relatively small. It’s only the first time. It’s only one failure. You can try again, learn from your mistakes. When you fail again, the hurt grows bigger. The process repeats. You try again. You try to identify the causes of your failure, to fix them. Every time, something new goes wrong. You try again. You fail again. Frustration becomes humiliation, and humiliation becomes blame, and when the blame settles, you begin to feel something worse: powerless.

8. Price says that his spirits aren’t down, his confidence isn’t down. The Red Sox say they trust him. The Yankees slugged .470 against lefties this season, after all. They’re a great team. It was a bad night. What did you expect?

9. The Red Sox lost last night. The final score was 6-2. They will be welcomed into Yankee Stadium’s hostile embrace with this ALDS tied 1-1. The one loss was convincing; the one win wasn’t. The one win was a game that should have been easy, and it turned out to be a game that wasn’t easy at all. The one loss included Gary Sanchez hitting a ball literally out of the ballpark, which is about as convincing as you can get.

10. Ten is a nice, round number. Ten is double digits. It has a satisfying weight to it, a heft that can’t be denied in our metric, decimal systems of numeric ordering. If you flipped a coin 10 times and it came up heads 10 times, you would probably be a little entertained by that. That’s a 1-in-1024 outcome you’ve got right there. It’s something, having one outcome repeated 10 times out of 10. Price has lost 10 out of 10 postseason starts. Yes, it’s certainly something.

You need to be logged in to comment. Login or Subscribe
Kristoffer Ericson
Could/would/should BOS consider the "opener" philosophy for Price's next "start" so that he's actually relieving?
Reply to Kristoffer
David Brown
Saw a Twitter conversation about this VERY question. The Boston writer said the opener tactic is intriguing for Cora, and while Price might give him a hard time about it, and it's not an ideal time for experimentation (unless it's THE ideal time!), you never know. Just like Joaquin Andujar would say.
Reply to David
David Brown
Should they do it? I am going to say yes, because Price's relief numbers during the postseason, for whatever reason, are in line with his career regular-season performance, as Rachael pointed out.
Reply to David