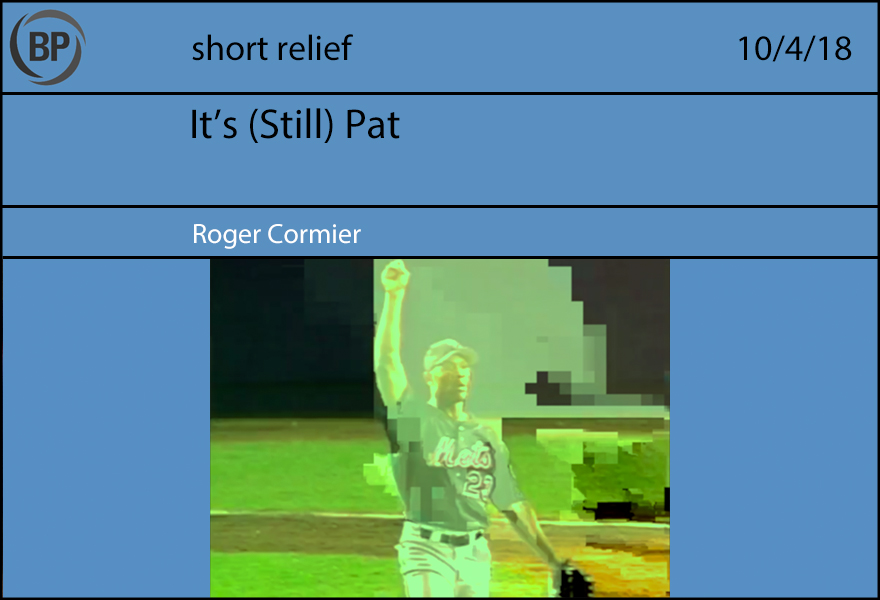 The 1999 Mets are haunting me. Mike Kinkade keeps leaping out from corners to shout “Boo!” as I walk with four iced coffees. Jermaine Allensworth whispers my deepest darkest insecurities in my ear every night as I try to sleep. It’s rather rude. I tolerate this because they were members of the first baseball team I rooted for who actually got invited to try their luck in the postseason. I used to always think about them this time of year, before more heartbreaking Met seasons replaced it as my measuring stick for October anguish. But recently I noticed the newest quarterback to supposedly change the game of professional football. His name is Patrick Mahomes, Jr. His father is Pat Mahomes, the same Pat Mahomes who pitched for a couple of teams during his career, including the Mets during the 1999 season.

Pat Sr. does not deny this baseball career, hilariously noting to Peter King the difference between his son getting properly and respectively groomed for his starting job, and in 1992 when the then rookie pitcher asked teammate Jack Morris to teach him the split-finger fastball and was told, “Get away from me, you little MF. You’ll be trying to take my job next year.” Mahomes had himself a decent 11-year career, despite not getting hot tips from the obviously very secure future Hall-of-Famer. I remember Pat Sr. being a really good mop-up/long relief dude, who kept the Mets in Game 6 of the NLCS after starter Al Leiter stunk up the joint and put the team in a 5-0 hole in the first inning without getting a single batter out. Mahomes went four innings and only surrendered one hit, giving the Mets a chance to come all the way back, then lose and be sent home for the winter in much, much more devastating fashion in 11 innings. I never forgot Mahomes, Sr.’s service. I definitely forgot he went 8-0 that year, and I never thought to look until just now that he put together a career-best 121 ERA+.

A few days after Mahomes, Jr. was getting the Peter King treatment, a new internet acquaintance and I spoke of the music we used to like and our feelings about it now, silently judging wehether the other is cool enough to continue speaking to one another. I remembered the existence of a cassette tape I put together of sounds emanating from my radio with recording capabilities in 1999, filled with now embarrassing tunes and snippets of Mets radio broadcasts. (I learned of Neutral Milk Hotel and the like at the dawn of the 21st century, don’t worry, I am really cool. RIP Oink torrents.)

Gary Cohen was on most of those Mets radio clips, which is ironic because he would absolutely hate being a part of this accidental mixtape. Cohen has been working the TV side of Mets baseball since 2006 and has grown comfortable enough to talk about his affection for lesser-known punk and new wave heroes like X. During a blowout last month, Gare casually dropped that he saw Blondie at Max’s Kansas City. His boothmate Ron Darling then said he saw The Ramones at CBGBs. This was a mistake. Gare name-checked Television and Richard Hell and the Voidoids without blinking. Nobody outflexes Gare in good music. No chance Gare, the real life James Murphy character in “Losing My Edge,” is a fan of my mixtape featuring one The Outfield song.

Then tonight I saw Yankees manager Aaron Boone on my television, finding himself in a one-game playoff. It seemed very familiar to me. It was a warm feeling. 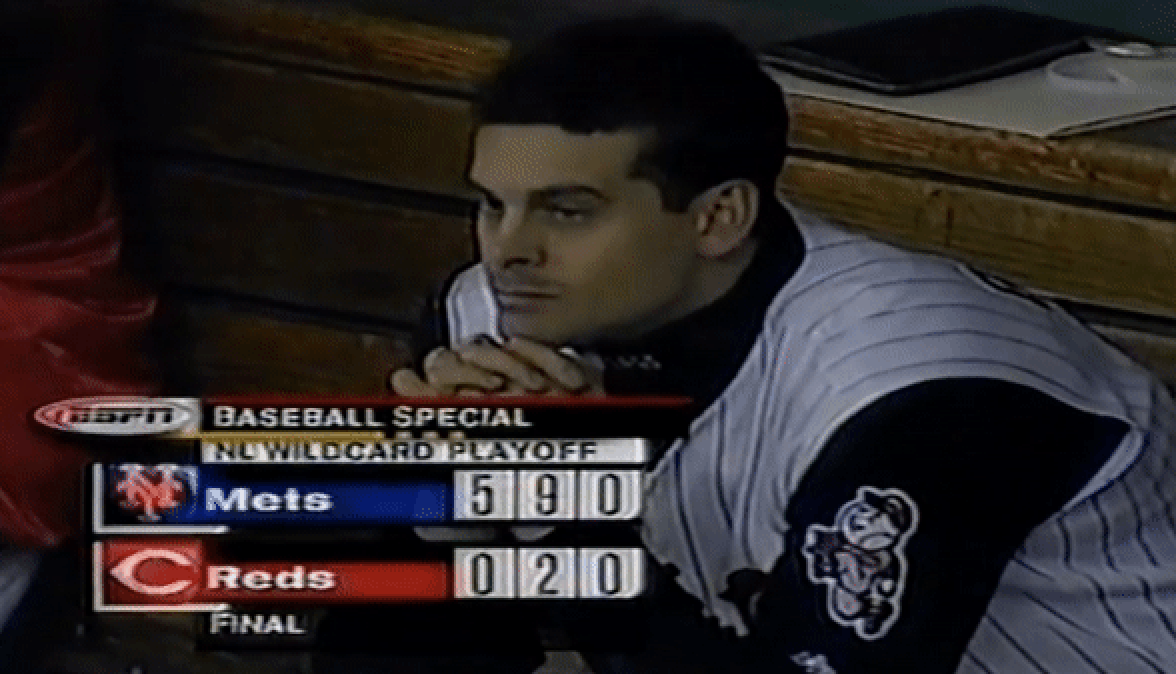 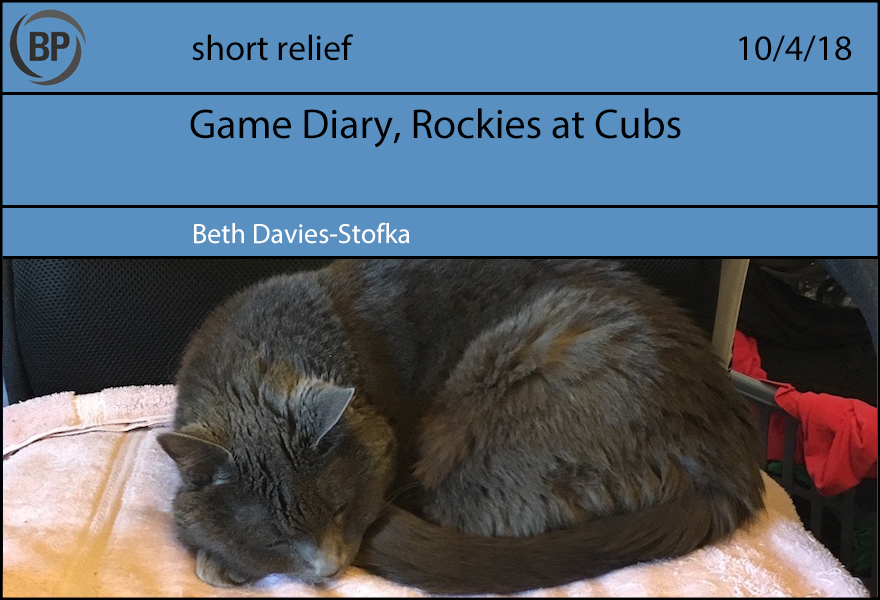 I’m sitting on the edge of my chair, notebook in lap and pen in hand, and I can’t wait for this game to begin. My 85-year-old cat Bonnie is sleeping peacefully next to me. The stage is set.

Blackmon scores on a sac fly by Arenado. Both managers wanted to score first. Does it matter? 1-0 Rockies.

Top of the Seventh

I’m thinking about that double play the Rockies turned in the bottom of the sixth. It seemed so perfect, impassive and professional. Was it? What if it was the most dramatic moment of the game so far, and we couldn’t tell because there was no one there to cheer it?

Bottom of the Seventh

So much happened! Story made a brilliant catch. Freeland was removed for Ottavino. Catcher’s interference! Ottavino loaded the bases! They were throwing mud on Freeland’s masterpiece. But Ottavino got a key strikeout and finally, we see Freeland let go with a primal scream. 1-0 Rockies. Time to wake up Bonnie and give her a pill.

Something like 2 hours and 45 minutes have passed since the Rockies scored that run back in the first. I know a lot of people would not call this “awesome,” but it’s my very definition of the word. With two outs in the Cubs’ frame, Terrance Gore comes in to run for Rizzo and steals second on the first pitch. Then Báez doubles and ties the game. I really want him to steal third. My husband calls up the stairs: “Can I get you anything?” “No, thanks!” I reply, and then see Báez standing on third. There’s no time to work out what I missed. “Steal home!” I whisper. But the inning ends, leaving him stranded.

Score is tied at 1-1, and this is the best game I’ve seen since yesterday. It spills into extras with the emotional contrasts intact. Cubs are emotional, Rockies are impassive, and I am getting a little worried because it’s a school night.

The Rockies leave the bases loaded, Contreras struggles with a leg cramp with no one left to replace him, and then: The Hug! The HUG! Javier Báez must be partially materialized from an alternate baseball universe, just to spread joy wherever he goes.

It’s way past my bedtime. I’m going to take a shower.

My husband checked on us, but Bonnie and I were sound asleep, both purring. I woke up at 3:45 am to find out that the Rockies won, on an RBI by a guy hitting .170. Final score: 2-1 Rockies. I could not love baseball more, in the past or present tense.