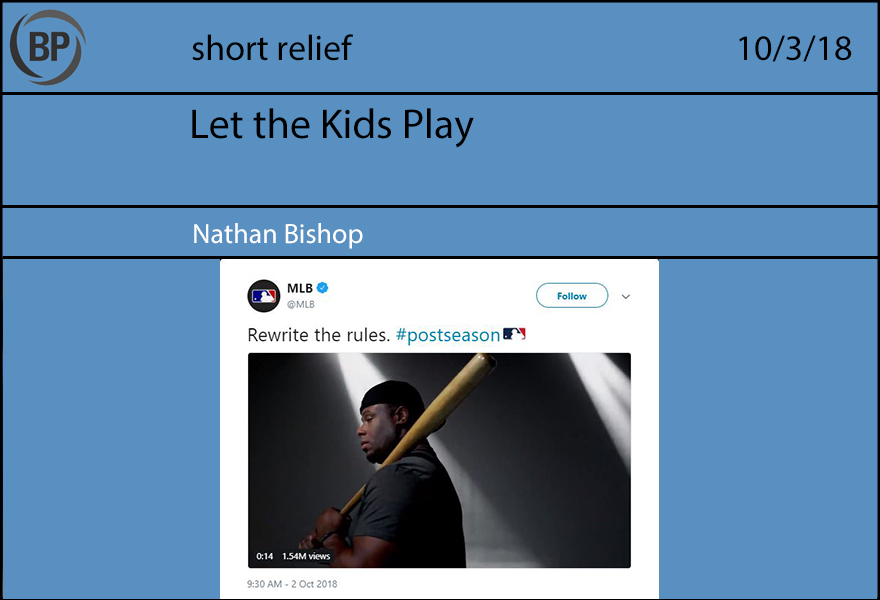 It’s important to acknowledge what this ad is and is not.

It is not a sign of some cultural sea change within the game of baseball, wherein more than a century of stodgy traditionalists, puritan-descendant Northeasterners and barely disguised racists have bludgeoned the exuberance out of the young, reckless and darker skinned. It is an ad designed to appeal to a certain, very online portion of baseball fans. Much like Nike’s recent decision to focus its advertising around Colin Kaepernick, this video was heavily focus-tested, the pros and cons carefully measured, and only released when baseball executives were certain it would elicit the kind of favorable response it has indeed received.

It does not serve as a signifier that the brainless beanings of young players with the temerity to show happiness will cease next year. It does not mean we are done with things like Francisco Lindor apologizing for being excited to hit a home run in his homeland. It does not mean that you can have a baseball conversation with your coworker without being worried about hearing about how certain players “carry themselves” or “don’t seem to care.” It doesn’t mean we’ll get a full season of consequence-free bat flips, creative walk-off celebrations or custom cleats next year.

Perhaps what it does mean, if anything, is that the playoffs are different. That when we raise the stakes, the need for victory—something that can often feel contrived or forced over 162 games—we allow for today to matter more than yesterday or tomorrow. Maybe it allows for a little less time to worry, and, while everyone’s not looking, the very thing we all seek—but our game often seems to most fear—can sneak in: Maybe it’s a small toehold for fun.

In the end, like most things, and particularly baseball things, this minute-long advertisement probably means very little. But it exists, and as I mentioned above it does, in part, because the idea of allowing the game we love to be played joyously by men who love it served at least some small good business sense for Major League Baseball. I am no great understander of business, and I acknowledge they are in control of the supply of their product. However, we control that product’s demand. We control what we demand that product be. Maybe, just maybe, this means we’re demanding a little more joy in it. Maybe it means we’re demanding something a little bit better. 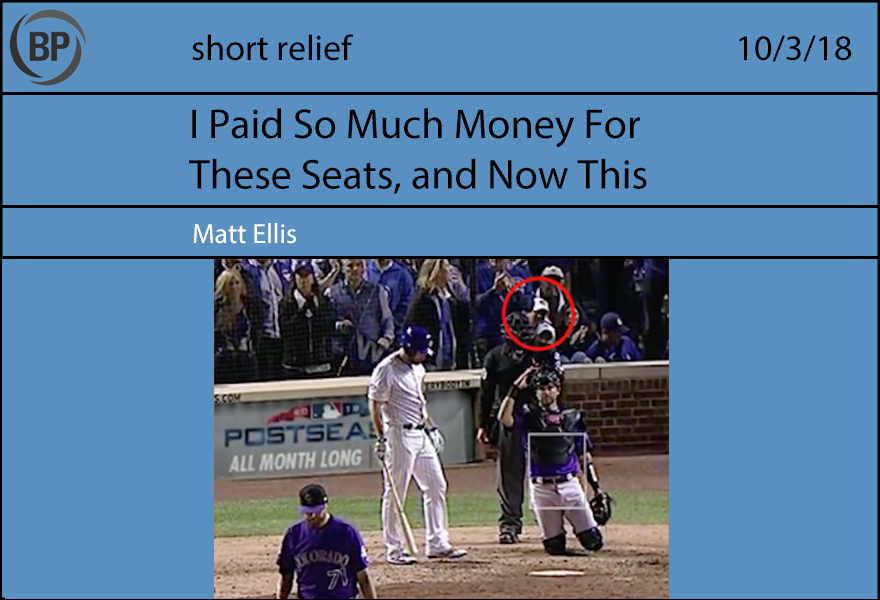 So there I was, just sitting there in the seat I paid for. Paid! How much? Sheesh, pal, you don’t even want to know, but I paid it, and now THIS?

Yeah, been kind of a wild game, sure. Cubs down a run all night, that Freeland kid just unhittable. Unbelievable. What was Contreras thinking? I could see where those pitches were landing, I was right behind the plate. Then, something flipped—the air felt different, you could see it out here with all these folks feeling desperate. I suppose that should have been my first sign.

It started early. Javy was up, and he was looking for something good to hit and then BAM: blue everywhere, blue like one of those visors you put up in your ‘88 Lincoln Town Car to keep it cool before they tinted the windows, blue like the Michigan, blue like what its gonna feel like outside in a couple of months. I did not come here to see blue.

In retrospect, I suppose I could have stood up. But once you open that door it’s over: up, and down, and up and down again, and I’m just here to witness a baseball game that I paid good money to see. My pops waited 86 years to see these Cubs go all the way and he didn’t make it to the second decade of the new century. I’m sitting where I please, thank you very much.

So the neck will have to do. Sure doesn’t bend like it used to, however. And what’s next? They already monetized the rooftop seats, buried the bullpens so they could fit in more warm bodies to extort for overpriced plastic resting behind some jabroni who just can’t wait to lock his knees. A trip to the park just isn’t what it used to be in this hypercommodified hellworld we live in. I can just see it now, a fee to get up to go to the bathroom. Markup on peanuts. Are we just going to let ESPN ruin everything? Let them decide what happens off the field so their television broadcasts appear to their typical viewer to b—oh wait, the Rockies are sending out Seung-hwan Oh, I gotta stand up to see this. 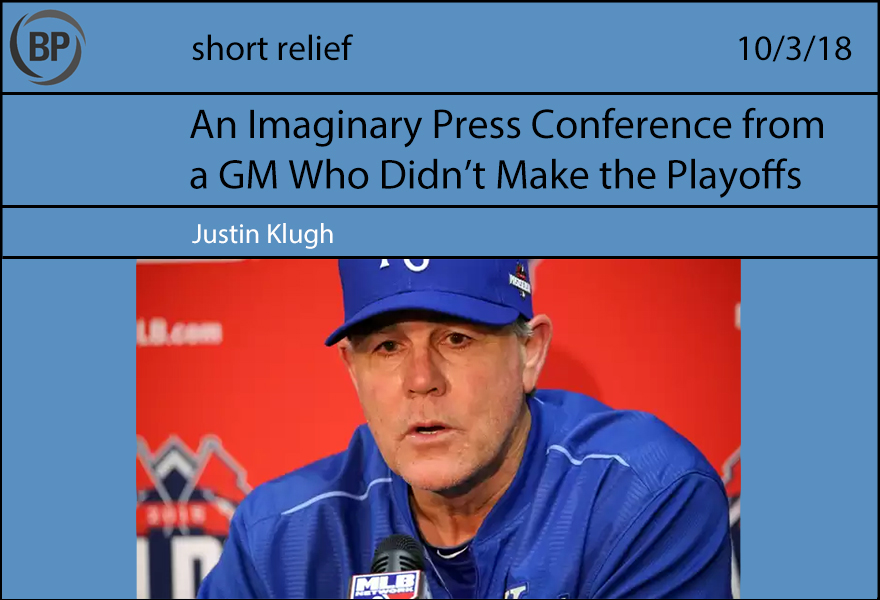 How do you view this season as a whole?

Did we fail to make the playoffs this season? Resoundingly so, yes. But we also [rifles through nearby papers] led the league in two-out walks during night games, so I see no reason to classify this season as a total failure. That’s what fans come out to see: Long at-bats, followed by a grown man tossing a bat to a little boy and slowly jogging to first base. Nobody wants baseball to be lightning-quick anymore; it’s too confusing. How are we going to attract new fans when the action is moving too fast?

Do you regret making or not making any moves that could have been the difference for this team?

Knowing what I know now, I would have probably done something else, given the chance. For instance: Would I have acquired Christian Yelich at any cost? Yes. If I could not have worked out a trade, I would have rushed to his personal home and banged on the window, explaining that I was from the future and if he didn’t force a trade to our organization, the a global cataclysm would occur. Do I have access to information like that in this scenario? I’m some sort of time traveler, yes? So theoretically I could use that to my advantage during the recruitment process. I can’t believe the Players’ Association wouldn’t have worked something about that into the most recent CBA.

Was this season a disappointment from a wins and losses standpoint?

If you would have told me leaving spring training that we would have as many wins as we had, I would have been quite pleased. But a bigger question, I think, is who is this person who stops me and tells me the future? Are they who I get my time travel powers from later? The ones that help me trick or threaten Christian Yelich into coming to our club? What are their motives? Are they going to every team’s GM and warning them about their futures? What about Paul Molitor? Did he know he would be fired? And so you see, that question just leads to far too many other questions to be a viable option.

Is there any particular component of this season that you feel led to you missing the postseason again?

I blame the players, mostly. You know, they’re the ones with the bats and the gloves. I’ve just got my spreadsheets. I can’t hit a curveball with a spreadsheet, you know? I can’t go first to third in my fancy shoes. Heck, I don’t want to get within ten feet of the infield dirt. It’s too messy. Have you ever seen a baseball field after it rains? Yuck!

But yeah, I think anybody watching the games this year would blame the players. Why they didn’t just look at Christian Yelich and do what he did is beyond me. I mean, he was right there, on TV all the time. Sometimes they were even playing against him. If this team could have been nine Christian Yelich’s, I think we would have had a much better shot. But the players failed to do that, so I blame them, and you should too.

What would you say to the fans, who might be feeling frustrated right now?

I would say to find another sport. Look, you didn’t want nerds to infiltrate and take over baseball, but we did. You couldn’t stop us. And now we’re turning all the tobacco-spitting and beanballs and into depth charts and walks. It’s our sport now. I’ve talked to the other GMs and we aren’t going to stop changing things until baseball is a sport that is played solely in the back room of second-hand video game shops. Rob Manfred may be focused on pace of play, but think about it: Have you ever seen Rob Manfred in public? That’s because he doesn’t exist. We invented him at the Winter Meetings a couple of years ago to distract you all until we had completely taken over. Now excuse me, I’m going to go acquire Carlos Santana and hint that he’ll be playing in a corner outfield spot.