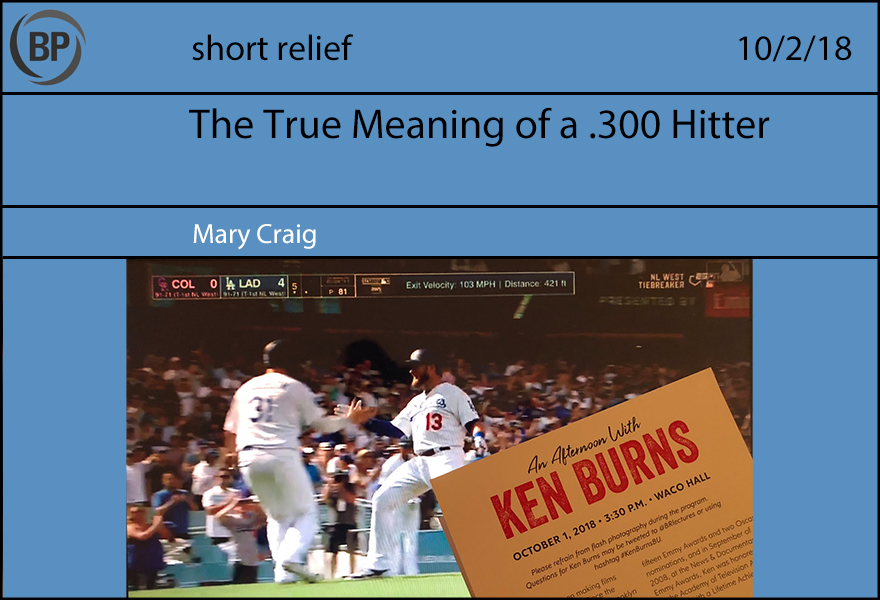 As the Dodgers and Rockies began their tiebreaker game, I filed into an auditorium that was both too hot and too cold to listen to Ken Burns give a lecture titled “Sharing The American Experience.” As a baseball fan and somebody who studies American history, Ken Burns has long been a figure that people assume I admire. To be perfectly honest, I haven’t seen much of the man’s work, aside from the first two “innings” of his Baseball series and his documentary on Huey Long.

Though the crux of his talk was the of language in crafting narratives and forging commonalities among people, he did not escape the afternoon without mentioning baseball. Indeed, he began his lecture with a discussion near and dear to me: how the history of baseball corresponds to the history of America. Drawing on the history of Ebbets Field and various Yogi Berra anecdotes, he asserted that baseball reflects so much of America because of its unique ability to craft a space in which memory gathers. For instance, he said, his daughter knows the significance of a .300 hitter, as does his father and grandfather and great-grandfather.

After a seemingly interminable plod through the 163 regular season games, the playoff field is set. This season, eight batters who hit .300 or better during the season will have the chance to play for a World Series title. After six months of sustained excellence at the plate, each of these 8 players risks the chance of having their season defined by anywhere from 1 to 20 games, which is at most 12% of the regular season.

In every sport, the idea of playoff performance superseding or negating regular season performance seems unfair, and for baseball, it strikes one as particularly illogical or cruel. If there was any remaining doubt about a baseball player’s inability to carry a team to victory, one need not look farther than Jacob deGrom’s 10-9 record to put the issue at rest. None of the 10 playoff teams contains only one superstar player, and one will win the World Series on the back of a single man.

In concluding his lecture, Ken Burns stated that human beings spend their lives looking to defy the irrefutable fact that 1+1=2. In other words, we relentlessly seek to prove that the whole is greater than the sum of its parts. Over the next month, these playoff teams will undertake the same exercise. It just remains to be seen whether the whole and its parts refers to a team and its teammates or the playoffs and the regular season. 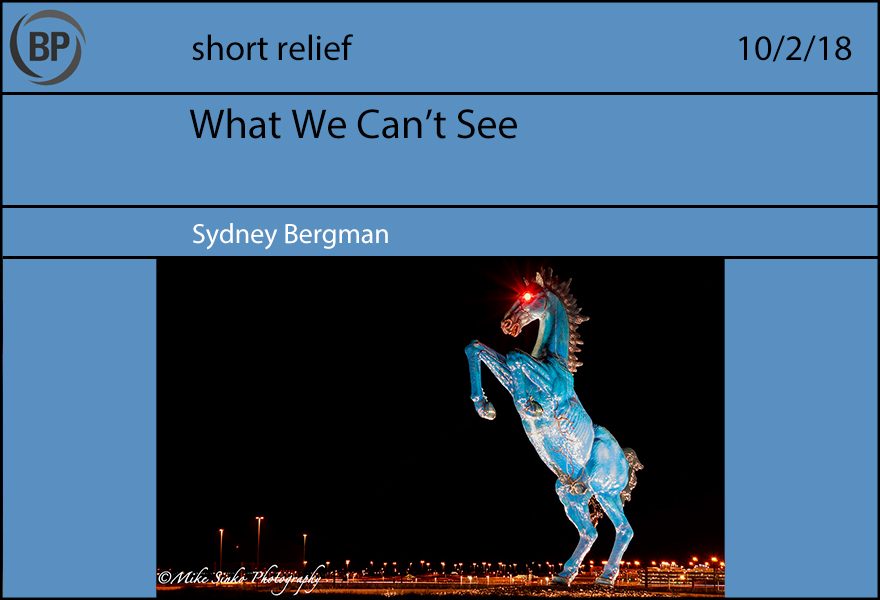 Everyone loves a hilarious promotional tie-in. They provide a welcome respite from the non-stop seriousness of baseball—and give fans a chance to spend money on a shirt that people will stare at for a couple of seconds, then make sure not to ask about. That’s why, for one day a season, every team should have to be renamed after the best conspiracy theory or cryptozoological phenomenon local to them.

What I’ve gotten from spending 12 years with someone who could be described as a “conspiracy theory enthusiast” is that there are a lot of conspiracy theories and cryptids. A lot. And the ones that aren’t at their core racist, anti-Semitic, etc. are pretty amazing.

Some minor league teams have already gotten in on the action. The Vermont Lake Monsters, named for the Lake Champlain Lake Monster, whose name is Champ but will always be known in my house as “off-brand Nessie.” Roswell houses the Invaders, rather than the Grays, a disappointment to UFO believers generally and X-Files fans specifically. And in other sports, Jersey has already claimed the Devils.

But consider the Seattle Bigfoots (Bigfeet?). Or the Florida Swampsquatches. The Washington Chessies or Baltimore Goat Men.

Or for fans of conspiracies surrounding the Denver International Airport (really, look this up, this is a thing; my husband has a slideshow of it, send help), there are a variety of options: The Denver Luggage Devils. The Colorado Ominous Murals. The Mile-High Glowing Horse Eyes. Or this could be taken more liberally. Consider the Los Angeles Ley Lines or the New York Whatever Nic Cage Was Talking About in the National Treasures. The Boston Dan Brown’s CliffsNotes.

I assume that all teams would not only have uniforms that speak to their chosen cryptid or conspiracy theory but also get rules allowances to go with their new team names. The Bigfeet couldn’t be caught stealing. No pace of play issues for the Cincinnati Loveland Frogs. Team lineups could be listed on boards with a lot of red string.

A bipedal frogman menaces teenagers playing Pokémon Go in Ohio. A pitcher haunted by an invisible demon called the Yips. We like to put names to the things we fear. 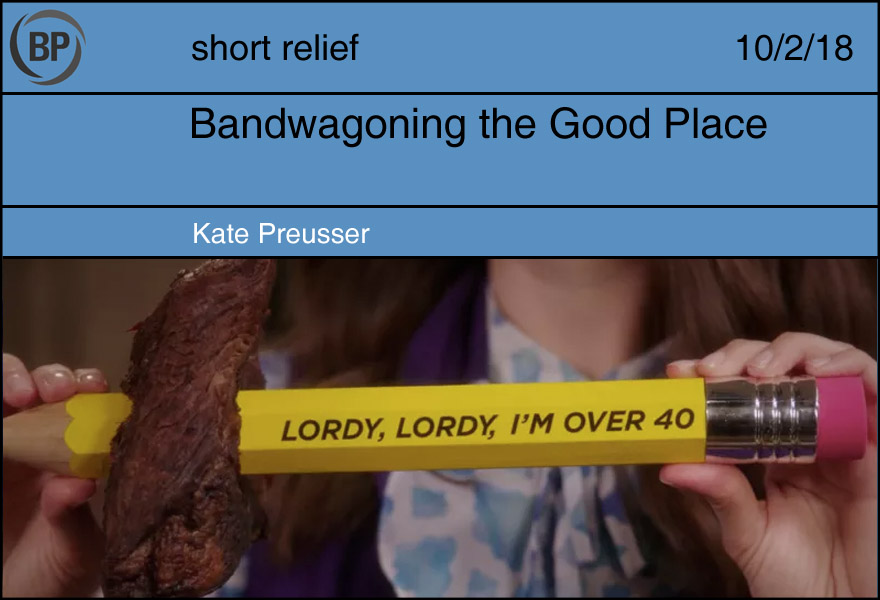 The end of the baseball season means the fans of the other 20 teams get to choose a team to bandwagon through the playoffs. But how to choose? Some will gravitate to their favorite players’ teams–at last, a chance to root for the golden lighthouse of joy that is Mookie Betts! Others will choose to root against bitter division rivals, or for #TeamChaos to extract as much baseball as possible before the long, cold winter descends with its icy teeth and garish Superbowl Sunday lures. This year, perhaps consider choosing to root for the team that aligns most closely with your moral center. How to find that out? Take the Good Place character alignment test, obviously, and choose the team who fits with your soulmate character:

You think being indecisive is a charming personality flaw because it mostly hurts you, but newsflash: it hurts everyone around you all the time. Success for you is predicated on a very narrow plane of existence. Your playoff odds look like a skateboarding octogenarian’s EKGs. Your team is the Colorado Rockies.

You wish there was Yelp, but for friends’ dinner parties. You once described blue cheese as “déclassé.” You think slumming it is when you buy any domestic wine for your hot air ballooning outing. You use balloon as a verb. Your team is the New York Yankees.

You deliberately, gleefully litter in the nicer areas of town. You love beer, or beer-adjacent things. You are scrappy, although since you’re actually scrappy you would never call yourself scrappy, and also, they started it. You wish you could eat an enormous edible and slide down the biggest, yellowest slide in existence. Your team is the Milwaukee Brewers.

You are Arizona Eleanor:

You’re moral, until being moral inconveniences you in any way. Your team is the Houston Astros.

No matter what your biological age is, you come off as very young. You’ve made mistakes that would get other people killed or banned from baseball forever but somehow you’re still standing here holding a Ring Pop you found somewhere. You love your hometown despite its many, many flaws, which have been enumerated in no less than three prestige dramas and a half-dozen hit songs, including one that insistently rhymes it with “Havana.” Your team is the Atlanta Braves.

Your capabilities are limitless, which unfortunately renders you sort of boring. It’s fun to watch you summon an ostrich steak impaled on a pencil that reads “Lordy Lordy Cathy’s 40”, though. Your team is the Boston Red Sox.

You are Bad Janet:

You think everyone else is a loser, and you’re here to own all the haters. You prefer your pants tight and your hair high. You could listen to Puddle of Mudd, or the sound of a million vuvuzelas or drums or whatever, for literally hours. You enjoy the smell of your own farts. You live in the Bad Place. Your team is the Oakland Athletics.

You are Mindy St. Clair:

Your team is the Cleveland Indians.

You love eating at Brazilian steakhouses. You have no problem encapsulating someone in a cocoon of goo when they displease you. You say “gotta hear both sides” unironically. Your team is the Chicago Cubs.

You are The Judge:

Morally you aren’t one way or the other; you just are, and always have been. Television is very important to you. Your team is the Los Angeles Dodgers.