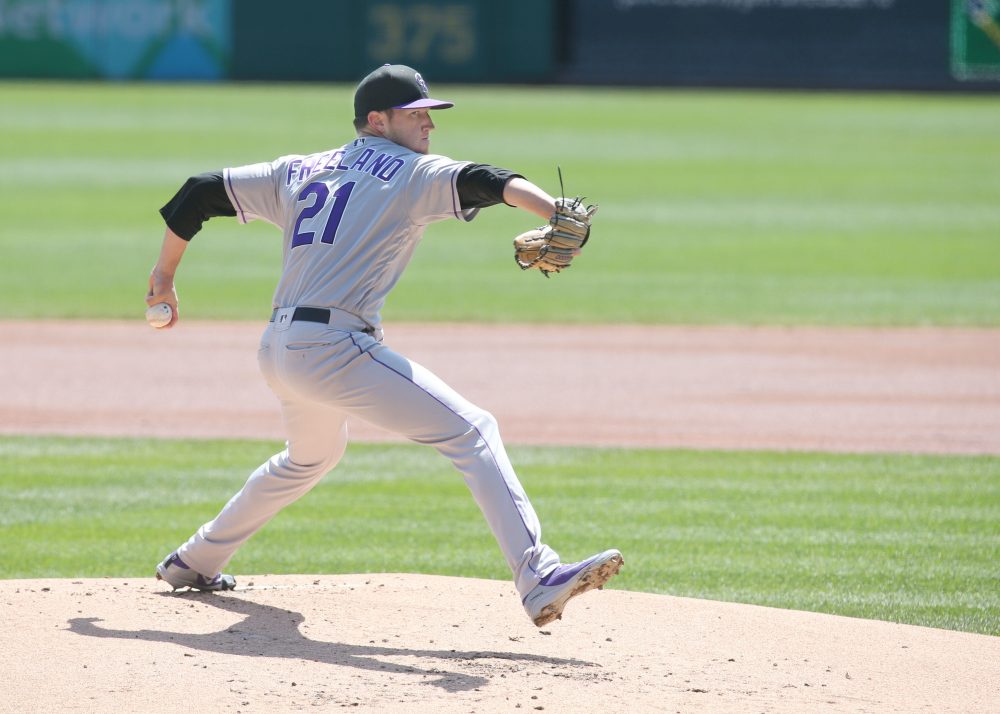 The finals of the Game 163 losers bracket pits one of this season’s breakout pitchers, 25-year-old Kyle Freeland, against one of the best postseason pitchers of all time, 34-year-old Jon Lester. Milwaukee awaits the winner in the NLDS.

Freeland has cracked the code of pitching at Coors Field, posting a 3.04 ERA in 34 career games at altitude. If you can make it there, you can make it anywhere … even Wrigley Field in a must-win game? Freeland faced the Cubs just once this season, way back on April 30, when he tossed seven innings of three-run ball in a 3-2 loss at the Friendly Confines. Of course, the Cubs’ offense is far less imposing these days, ranking 10th among NL teams in OPS during the second half. They were even worse than that in September, and managed just one run on three hits versus the Brewers yesterday.

Freeland will be working on three days’ rest for the first time in his career, but insisted it won’t be an issue: “I’ve done everything I could to get my arm feeling good from my last start, and it feels good right now. I’m ready to go, and I’m not too worried about being on short rest.”

This will be the ninth season in which Lester has pitched in the playoffs and he’s logged 148 career postseason innings, a total topped by only Andy Pettitte, Tom Glavine, John Smoltz, Roger Clemens, and Greg Maddux. Lester has a 2.55 ERA in the playoffs, which includes three runs allowed in 14 1/3 innings last October following what was a very shaky regular season. Now he’s coming off a very good regular season, tossing shutout ball in three of his last five starts. Lester faced the Rockies just once this year, but it happened to be the one game Freeland faced the Cubs: April 30, at Wrigley Field. Lester allowed two runs (both unearned thanks a Baez error) in 5 2/3 innings.

Freeland has fairly typical platoon splits for a left-hander, but the Cubs ranked just ninth among NL teams in OPS versus lefties this season. Kris Bryant (.721), Javier Baez (.571), and Willson Contreras (.450) are the only regulars to slug above .410 off southpaws, but getting David Bote into the lineup—with Bryant shifting from third base to left field—would add one more dangerous right-handed bat to the mix.

Colorado had the second-worst road OPS in the league, hitting a combined .226/.295/.370 away from Coors Field. They figure to stack the lineup with righties against Lester, likely including the amazing comeback story of Matt Holliday, who hit .283/.415/.434 in 25 games down the stretch at age 38 and has made a career of knocking around lefties. Despite all the attention paid to Lester’s inability to throw over to first base, he allowed just 14 steals along with nine caught stealing in 32 starts. Colorado stole the third-most bases in the NL, led by Trevor Story (27), Ian Desmond (20), and Charlie Blackmon (12).

Joe Maddon used six pitchers in relief of starter Jose Quintana in Game 163, although none of them threw more than 16 pitches. That’s the good news. The bad news is that even if everyone is available, Maddon doesn’t have many relievers he can really trust in big spots. Despite leading the league in bullpen ERA during the regular season, Chicago’s relief corps minus injured closer Brandon Morrow sure seems like a potential October weakness.

Right-hander Pedro Strop, who filled it at closer in the second half, could be available after missing two weeks with a hamstring injury, but it’s hard to imagine him jumping right back into a high-leverage situation. That leaves Carl Edwards Jr., Jesse Chavez, Justin Wilson, Steve Cishek, and Brandon Kintzler as key late-game options. In other words, Maddon is probably hoping for a vintage (read: long) Lester outing.

Bud Black mostly stayed away from his key relievers Monday, so Wade Davis, Adam Ottavino, and Seung Hwan Oh should be fully rested. Big offseason investments Bryan Shaw and Jake McGee should also be available, although with ERAs of 5.93 and 6.49, respectively, that may not be particularly reassuring for Rockies fans. Freeland has gone at least six innings in 11 consecutive starts, so despite spending lavishly on their bullpen the Rockies are probably hoping to avoid asking relievers to get more than 6-8 outs.

On paper at least this seems headed for a low-scoring affair, which means it may simply come down to which shaky bullpen can avoid imploding after the standout southpaw starters exit. Las Vegas sets the over/under at 7.5 runs. Chicago is a -140 betting favorite, which is fairly standard for a home team in a relatively even matchup and has an implied win rate of 58 percent. PECOTA sees the odds being slightly longer for the Rockies, giving the Cubs a 62 percent chance to win.