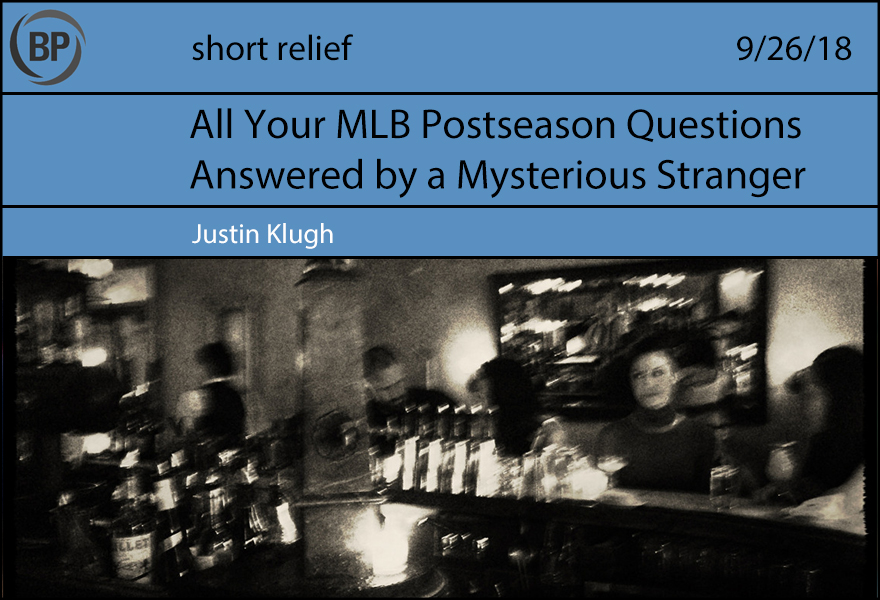 Hey everyone! Welcome to our MLB Postseason chat, where you can ask today’s host, [GARY WHEN WE FIND A HOST MAKE SURE TO PUT THEIR NAME IN HERE], all your burning playoff questions! Feel free to ask away starting now!

@JudgeJuryXecutioner: how do u see this playoff picture shaking out

Mysterious Stranger: Heh heh. You fool. You peon, gleefully enslaved by the passage of time. The future is an unknowable beast, silent in the corner, feeding on your assumptions and projections. It grows larger from your ignorance until it consumes the room and you discover that you are living inside of it. As you grapple with this new world, you discover a new beast in the corner, and in your arrogance, you begin once more to guess its name.

@happen_stance: How important do you think home field advantage is for the Wild Card?

Mysterious Stranger: You know the greatest lie in America? That we’re safe in our homes. That we can lock our doors and keep the world out. There’s no way to insulate ourselves,no wall to put up between us and the spasm of bloodlust that’s coming. You turn that bolt every night, embracing the illusion it provides you, but it’s not the door from which the worst horrors of our world will come; it’s the cracks in our windows, the flaws in our bodies, the holes in our minds. The only true “Wild Card” is chaos. And in that game… we all lose.

@a$$backwards: Which non-playoff team has the best shot at the post season next year?

Mysterious Stranger: They say every failure is a lesson. But what if what you learn is that you are a failure? We may share the streets and sidewalks with each other, but in truth, we all live in the sewer. Don’t look upon each other and see your betters; for every perceived superior, there are dark secrets waiting to explode from within like a nest of spiders. There is nothing but a gust of wind, a turn of a knob, or the twist of a knife separating this world’s shining champions from its diseased peasants. That is what you root for, in the end: That the chance of cruelty widens enough to swallow your perceived enemies.

@mind_blowing_sox: Does Didi Gregorious’ injury hurt the Yankees’ chance at a deep run?

Mysterious Stranger: I killed a man, sure. [Ice clinking in a glass] We locked eyes from across the Sbarro and we both knew our fates were entwined. You never forget the sound of a thrown pizza cutter whistling past your ear; the shouts of onlookers to ‘take it outside;’ your fist striking the pavement as he dodges your blows. Finally, one fateful step backward, mid-taunt, and a yellow taxi cab does the job for you. You and the driver share a moment of dreadful panic, and as his tires squeal and he barrels into the night, you realize that was as close as you’ve ever felt to another person.

Mysterious Stranger: [Reviewing check from bartender] Whoa whoa whoa, were these not on happy hour prices? No? Well your website says it’s until eight… no I don’t want to talk to your manager. Can I just… I think you’re giving me some of the drinks from the guy next to me. No, we’re not going to “have a problem,” as long you give me the right bill. Well if you’re not doing the special anymore, you should take it off your website. Here, whatever, just use this credit card. No, I don’t have any identification. 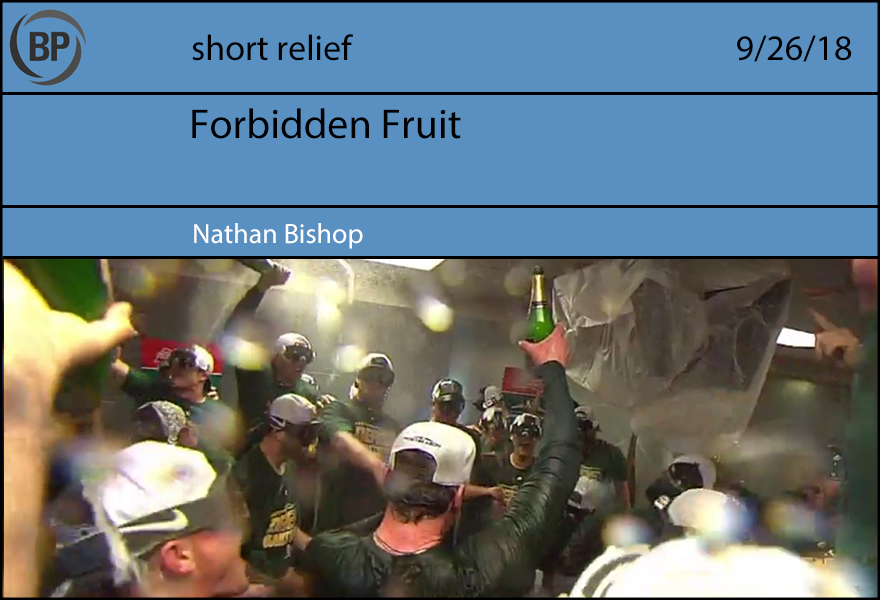 I have a variety of reasons for disliking the 2018 Oakland Athletics. Probably the one I should mention first is that by going 61-26 from June 16 on they made up more than 20 games on my poor, meek and mild Seattle Mariners. If MLB were a game of Mario Kart, the A’s grabbed a Bullet Bill item about halfway through lap two, and just never stopped Bullet Billing.

It’s worth noting here that the last time the Mariners had a season where they had a comfortable lead on a playoff spot was 2002, which is of course the season that Starlord, Brad Pitt, Jeremy Giambi, and math won 20 games in a row. You may have heard of the book they wrote about it.

The A’s, from the perspective of a fan with interest in the economics and labor practices of the game, are distressing. As the sport lurches towards the looming specter of labor strife, I worry about the message repeatedly crafting a winner out of discarded, low-rent veterans, and underpaid rookie wage-scale youngsters sends. The thought of the 2020 (or even 2019) A’s trading Matt Chapman, forever refinancing and chasing a slightly lower APR, makes me blanche. Trudging through seasons in O.co Stadium, truthfully perhaps the worst stadium situation in all of baseball, legitimizes the cries of poverty from ownership just enough to allow them leeway for such practices.

I don’t want baseball to be run like the A’s are run. I want the economic model to demand reinvestment, and incentivize teams to pay their players in line with the value they produce. The A’s (and Rays and a few others) winning more games with a payroll less than $100 million than their competitors reinforces not just the brilliance of the A’s front office, but the notion that baseball players are a fungible, anonymous resource.

There are good reasons then — emotional, historically-rooted, and socially conscious reasons for me to hold the A’s in disdain and root for their quick postseason demise. I am here to tell you I intend to ignore every last one of them come October and am currently shopping for A’s shirseys as we speak. I’m willing to overlook everything I’ve written above because I like baseball a lot, and no team in 2018 is more fun to watch play it than the Oakland A’s. I hope they win the World Series, and I hope their owners are stuck with them in the Coliseum for millennia, while every other baseball team continues to 3D print newer, fancier stadiums every 10-15 years.

Monday night I watched the A’s beat the Mariners, my poor, desperately earnest, eternally bridesmaided Mariners, 7-3 at Safeco Field, and all but run into the visitor’s locker to pop champagne, having officially clinched a playoff berth. The Mariners will miss the playoffs for the 17th consecutive season, which you may have heard is the longest such streak in major American sports. Reader, I don’t know from where or for what reason, but I watched it all and smiled.

“There’s no wrong way to fan” is what I’ve been told over and over. This year has me testing that statement over and over again. Go A’s.