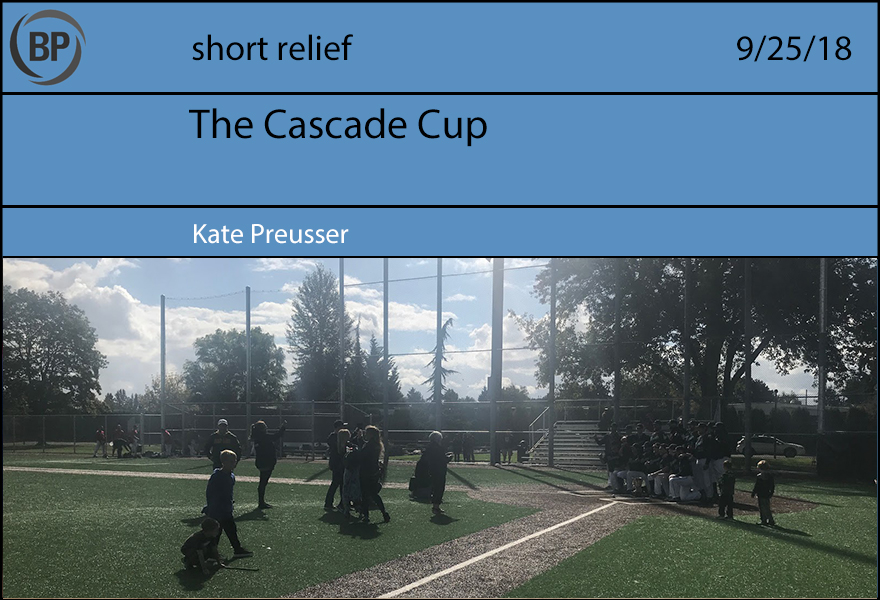 On Saturday, the Mariners won 13-0 against the Texas Rangers for their 85th win of the season, and were officially eliminated from postseason contention. On Sunday I woke up very early (for me, a child-free person who works late at night) and drove to Kent, about half an hour outside Seattle, to watch my friend and coworker John Trupin pitch in the championship game for the Puget Sound Senior Baseball League (PSSBL).

The PSSBL is an affiliate of the MSBL, the Men’s Senior Baseball League. The Wikipedia article for the MSBL explains it “started in 1989 for adults (ages 19–70+) who wanted to ‘play [sic] baseball.” (sic = Whoever edited the Wiki article apparently either forgot to delete someone else’s snarky scare quotes, or only made a half-hearted attempt themselves.) A handful of former minor leaguers are sprinkled throughout the MSBL and the PSSBL, along with former college players or current college students who don’t have the means or opportunity to go play in more prestigious summer leagues. John is a former Division-III college pitcher, and his team, the Ravens, plays in the “advanced” Cascade division, where some of the players have B-ref pages or work and train at local baseball facilities, hoping to catch the eye of a team. Others have jobs and families and are happy to come to the park once a week to play the game they love. (There are no practices. “That’s sort of the equalizer,” John says.)

Even for those who are no longer actively chasing their baseball dreams, a sense of pride remains. On Sunday the opposing pitcher was a Boeing engineer who played for his aeronautical college’s team and still, almost a decade later, possesses a zippy fastball (“zippy” in terms of this league is mid-80s) and a bulldog mentality on the mound. He stalked off, pounding his glove, after striking out the side; he punched himself in the face, Ken Giles-style, after surrendering a walk. Meanwhile, The Ravens batters struggled to even get a ball out of the infield. In the bottom of the third inning, a towheaded boy of about four ran up to the fence as the Ravens came up to bat. “Try to do better this time, Dad!” he called.

John wound up going eight innings and surrendering just two runs, none after the second inning. His teammates eventually managed to scrape out a run, and then two more, against the league’s second overall all-time ERA leader. Headed into the ninth with a 3-2 edge, the Ravens called in their closer—who is also their third baseman but is able to crank his fastball up to the high 80s—who struggled to find his command, giving up the tying run. The Ravens would have to try to win it on a walk-off.

Generally, the atmosphere in the stands during these games—even this one—is light-hearted, familial, if a little disengaged. It doesn’t cost anything to watch the games, so sometimes strangers wander by and sit in for a few innings, intrigued by this group, older than college players but more skilled than rec leaguers. Kids clatter up and down the metal bleachers and dogs chase after errant foul balls. Lengthy phone calls are made from the stands (the woman behind us spent three innings trying to work out something regarding a distant relative and a death benefit). But as the game headed to the bottom of the ninth, children stilled; hands were clasped in laps. It wasn’t just that those of us in the stands were thinking of extra innings, brunch plans deferred and more time pressed to the cold, wet metal bleachers, but the desire of the players on the field was palpable. For those who had to hand over their baseball dreams in exchange for a living wage, or because their fastball wasn’t quite fast enough, or their bodies refused the day-in and day-out punishment of professional baseball, the prize was more than a tarnished silver cup; it was the ability to hold a piece of that dream, even for a second. To reach, if not the top of the tallest mountain, at least one of the nearby peaks. They all wanted that, and we wanted it for them.

When the Ravens won on a walk-off single, my hands clapped automatically, but my first thoughts were for the second baseman, lying prone on the field where the winning hit had rolled by his outstretched glove; for the closer on the mound, hands on his knees, who had earlier fallen off the mound after throwing a pitch, grabbing at his hamstring. He had gotten up, shaken off his coach, set his mouth in a grim line, and resumed throwing. Every pitch was clearly agonizing, but he kept throwing. Now, he limped off, as the Ravens took the field to celebrate.

The kids came out to run the bases; the dogs looped the outfield wildly, barking and chasing. Wives and family members lined up to shoot cell-phone pictures of the team clustered around the cup. As the opposing players quietly packed their gear and left, it struck me how quickly a baseball field can turn from a place of the greatest joy and accomplishment to a place that feels hostile, unforgiving, alien enough to make you wonder how you ever thought you belonged here. It made me appreciate all the more John’s construction-worker teammates, the ones with the 9-to-5s and young families playing on teams with former pros and industry professionals, who show up the field probably feeling like they don’t belong, but are simply happy to be there, playing the sport they love. 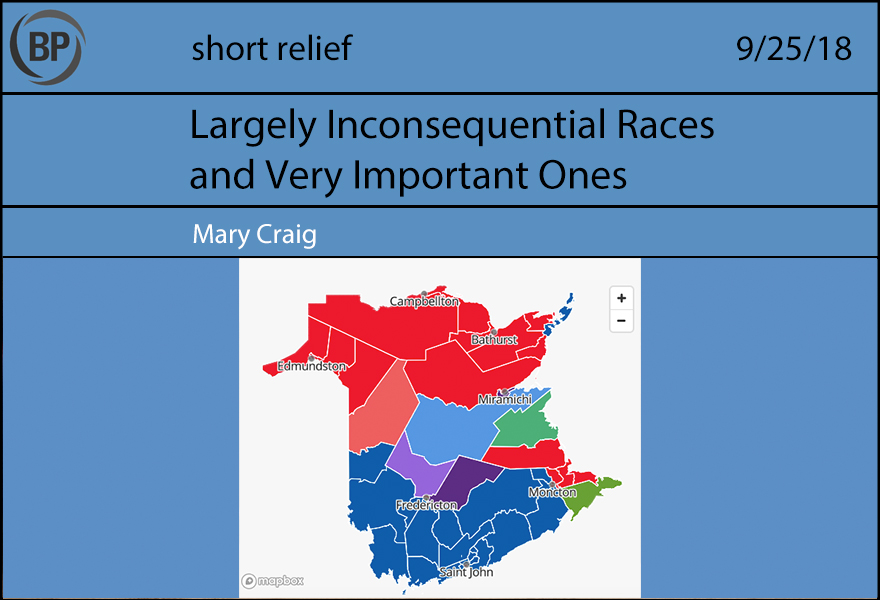 As I sat and watched baseball’s best team, the Red Sox, dominate its worst team, the Orioles, I kept close track of the results of the election taking place in my home province of 22 years. For decades, New Brunswick has been characterized by deep divisiveness culminating in almost total stagnation. One year, the Conservative party wins a majority; four years later, the Liberals regain control of the legislature. In between, New Brunswick remains the same, treading water in an Olympic race.

While Brock Holt grounded out to first, CBC announced the election would result in a minority government for the first time since 1920. The Conservatives and Liberals ended in a virtual tie, with 22 seats going to the Conservatives and 21 to the Liberals. The Green Party and the overwhelmingly racist People’s Alliance, each with three seats of a possible 49, will determine the fate of the government. To an outsider, it would seem like New Brunswick, which has spent decades running in circles, has finally managed a way out.

The Red Sox officially won the AL East title last Thursday and guaranteed home field advantage with their victory over the Orioles, and also set a franchise record of wins. This outcome seemed inevitable for weeks, making the final games of the season more a formality than anything else.

I quickly celebrated the unprecedented success of my favorite team before returning my attention to the election map in front of me. Although it is the most colorful electoral map of New Brunswick I’ve ever seen, it’s also the most divisive. In the North and East are the province’s Acadian regions, all firmly red. In blue, to the Southwest, lies the Conservative anglophone regions. In between marks the People’s Alliance, the purple signifying anything but the harmonious mixing of red and blue. The province is perhaps more divided than ever between the Francophones (who have long been neglected by the government) and the Anglophones, and whatever hodgepodge government emerges from the dust is sure to be short-lived.

In a little over a week, the Red Sox will begin a race which will define the nature of this team. In the same span, a new coalition will take over leadership of New Brunswick, either cementing the province as a decaying cesspit of racism and illiberality or providing it the spark it needs to finally ignite the flame of change.

Before this week’s election, I approached New Brunswick politics in much the same way I approach the post-2004 Red Sox: a loss, however painful, won’t matter much in the long run. In that particular sense, nothing has changed. There will be another election, simultaneously all too soon and much too far away, yet this election feels different. As I prepare to rub off whatever loss will come the Red Sox’s way in the playoffs, I find myself desperately hoping to be able to do the same with New Brunswick. 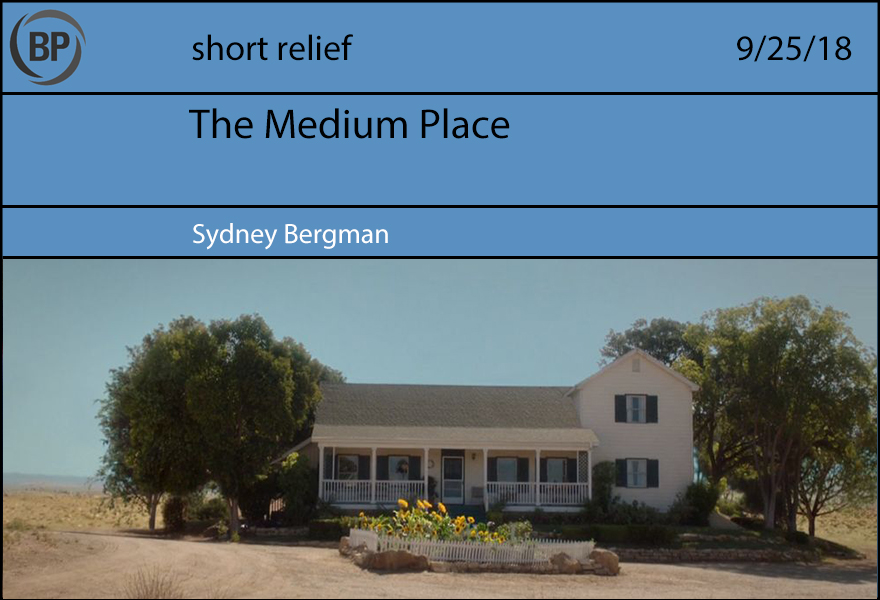 We found it—the medium place. The hovering around .500 place. The Mindy St. Clair’s house of baseball. Neither a good place nor a bad place; just a place to go and contemplate one’s strengths and transgressions in the quiet beige house of mediocrity.

The Nationals season is disappointing, mostly because we wanted, hoped for, expected better. Instead, we’re left with a season akin to Cannonball Run 2; a season the equivalent of eating a grilled chicken sandwich at the airport. Fine. Aggressively, maddeningly fine.

I remember years before 2012. The Lastings Milledge era. The Josh Willingham epoch. My sister has a Zimmerman shirsey signed by … Ryan Church. It’s the bad old days, and you know what, they were still kind of fun?

I went to the All Star Game Fanfest this year, and stood in line to have Chad Cordero sign a Chad Cordero baseball card where his head is mostly his hat. Cordero, the first of the Nationals who alternatively gave me heart-eyes and heartburn, an All-Star who petered out in Triple-A. Maybe it’s just my nature to like players who feel like they can ascend to the firmament of absolute dominance—and then kind of miss.

Some games, it feels like they rolled in with two duffel bags of cocaine and exciting sexual proclivities (it’s a Good Place reference; hi, Mom). Some games, it’s your favorite beer, but warm. Some games, it’s getting dunked on by fans of other better teams—oh, did you know we’ve never won a playoff series? This is brand new information! And some games it’s commiserating with those same fans about a 2-1 loss where everyone telegraphs in their performance.

The way the postseason is structured, most teams won’t make it most of the time. And that’s OK. I watched hockey for a long time, and the Stanley Cup playoffs go on for approximately 45 decades each year, with the only sign of progression players’ post-apocalypse beards and overall snaggle-toothery. Hockey teams just have to be not terrible, and they make the postseason—no shade, because the 16 wins between a team and the Cup is daunting enough.

Baseball teams have to actually be good during the regular season to progress. The Nationals, bless each of their hearts, are not good right now. They’re not bad, they’re just medium, and going to the place that mediocre teams go: the purgatory of the offseason with lots to contemplate.