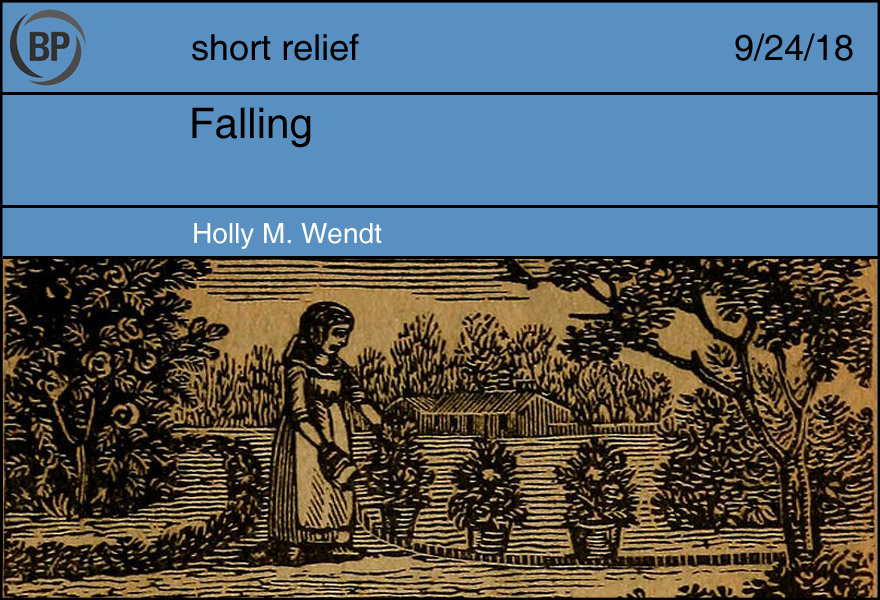 The stalks of the tomato plants have turned black and grown too tall, spindly Dalí horrors visited by one kind of vegetal blight or bacteria or another. On the heels of this wet summer, the green of their leaves glows virulent, and the heirloom tomato produces softball-sized fruits that have only flirted with ripeness before splitting, before the constant rain trapped in each crevice turned to rot. White mushrooms no one planted, ghostly and inedible, spring up between the cages, interspersed with the cherry tomatoes that have fallen, red and gold gems that seem to go from not-quite-ripe to too-far-gone while I’m at work. Crushed walnut hulls stain the road blacker, and the squirrels that linger often fatally near are undertaking their winter preparations in earnest.

This is autumn and the end to all of summer’s games. Saturday’s equinox will be complete by 10 p.m. in the same time zone in which the Phillies were eliminated from the hunt for the NL East title only a few hours before.

It was always a long shot, of course, and from the beginning of September, the question seemed more when than if the dream would falter, and when it did, it did in frustrating, infuriating fashion as the Phillies beat themselves more roundly than anyone else, no matter the box score. Offensive free-fall meets bullpen stagger meets defensive atrocities: it doesn’t feel surprising to be witness to the failure so much as lucky to have enjoyed those halcyon days at the top of the NL East in the first place.

Though it’s likely that the handful of remaining games will contain more bad baseball than good, I’ll watch them. The hope is that I’ll be proven wrong; relieved of the knee-buckling weight of playoff possibility, perhaps this largely inexperienced team will double-clutch and overthrow less often, will grip the bats a little less tightly. And perhaps I’ll be treated to more players playing in their customary positions, to one more quality Nola start, to the reminder of why I spend so much emotional coin on this team and this sport in the first place: anything can happen. Even rotting tomatoes bear good seeds. 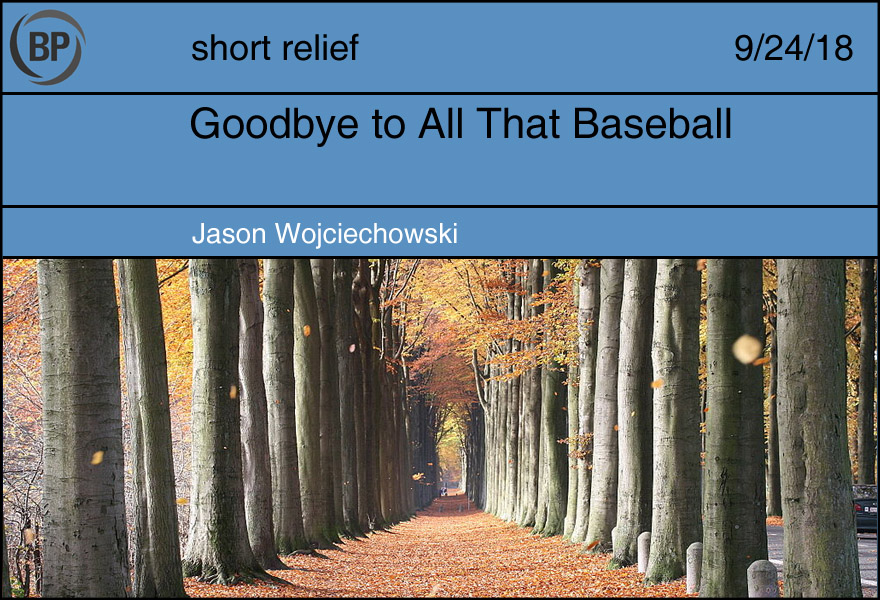 By the time my turn in the Short Relief rotation comes up again, this MLB season will, except for a makeup Marlins-Pirates game that has no reason to exist, be over. A new season, the October season, a thing that is very similar to major-league baseball but is not quite major-league baseball, will begin, but baseball in the way it is best known and understood will be over. Do we mourn or do we celebrate? Yes, we do.

We mourn and we celebrate the long periods of nothing punctuated by brief bouts of unpredictable something that fractally form a baseball year, from an at-bat to an inning to a game to a series to a season. We mourn and we celebrate meaninglessness: of 12 scheduled games today, half involve at least one team that still has playoff positioning to jockey for; the other half will be attended by tens of thousands of fans saying goodbye to Adrian Sampson and Bryan Mitchell or cheering for Dallas Keuchel and Corey Kluber to get themselves tuned up for the playoffs in a sort of September version of Spring Training. We mourn and we celebrate local announcing crews and too many box scores for any one person to handle and, outside of a few lucky cities, baseball weather. 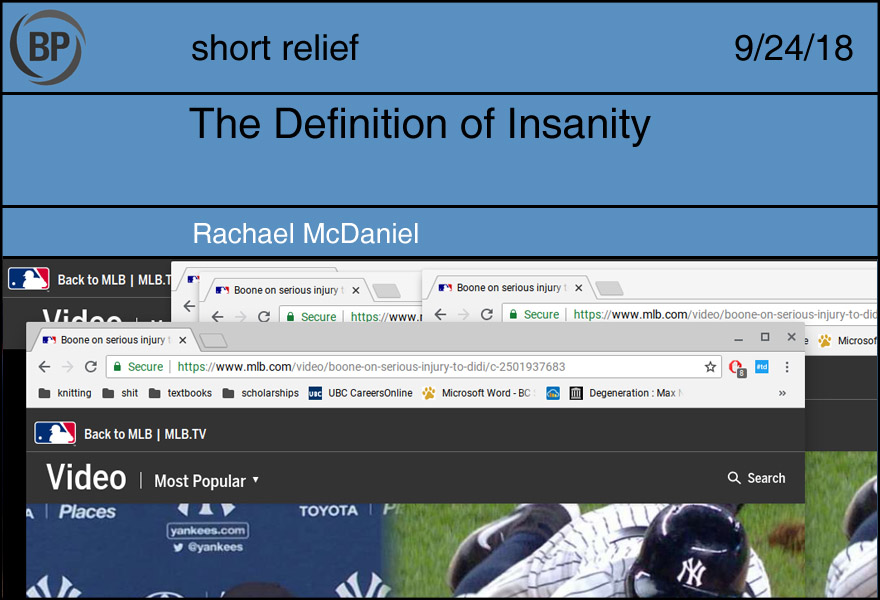 You’ve probably heard that stupid saying about the definition of insanity. The definition of insanity is doing the same thing and expecting different results. I hate that. Like most sayings, it’s both patently untrue and unbearably smug. The people who say this kind of shit in earnest are almost never people who know what it’s like to be actually, truly insane. Doing the same thing over and over again expecting different results, isn’t insanity—it’s just being alive.

I have had this quote repeating in my head all the time over the past few weeks. It echoes, as though spoken by someone else, whenever I blink and find that I’m in a place I’ve been before: on the bus, in class, in my room staring at a screen. Staring at a screen with a static image of baseball men frozen in motion on it, waiting for my internet to buffer so the game can continue. They all seem like the same game; they all look like nothing, feel like nothing, blurred nonsense like the classes and the view from the bus window. I wait for the image to move again, because that is simply what I do. I don’t really care if it does or not. I could do just this forever. Doing the same things a person would do, even when there’s nothing left but a consumptive guilt concealing itself in a body. Doing the same things over and over again, each day wondering again why it isn’t different now. The definition of insanity is doing the same thing over and over, expecting different results.

Every day the baseball men follow the same routine, running the same circles. When it works, it’s a perfect combination. Novel familiarity, that’s what it’s supposed to be. It hasn’t been working. It is every day the same, the same, the same, and all the faces blend in with all the colors, and all the colors fade out. The connection is bad; the image freezes. I have woken up every morning since February 2nd, 2015. I’m beginning to worry that the stupid saying is true.