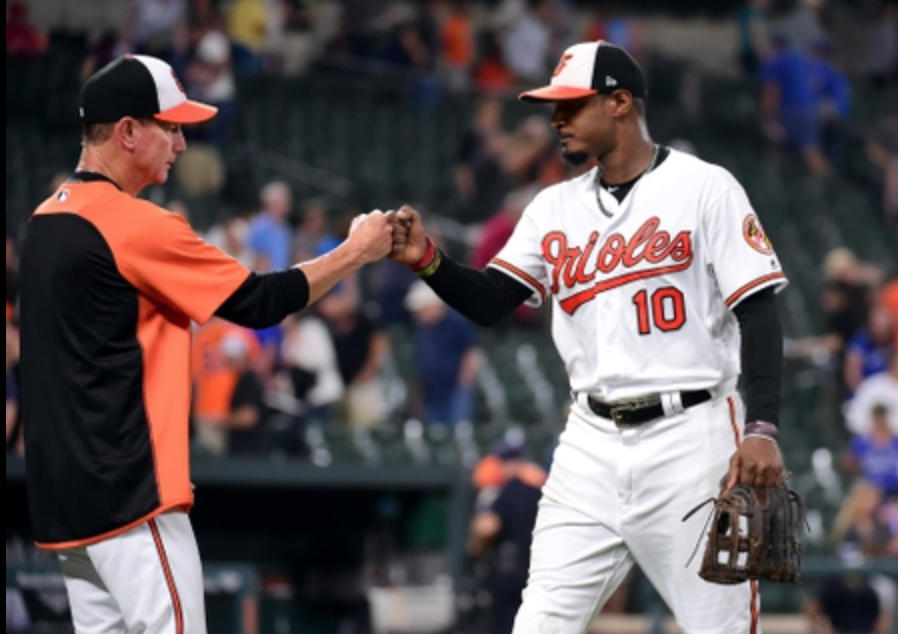 There will be no pennants commemorating the 2018 Baltimore Orioles. They will finish in last place, cratering just two years after making the American League playoffs, and people will lose their jobs as penance for the failure. But a 162-game regular season leaves tons of room for variance, and even the saddest season is bound to come with a couple of nights worth celebrating. Last night, hosting the Blue Jays, one of those nights developed for Baltimore—a refreshing change of pace from the rest of this year.

Jimmy Yacabonis started for the Orioles, and he didn’t pitch deep into the game but he was effective. Yacabonis gave up two hits and a walk, striking out four and holding his own until the fourth inning. Yacabonis loaded the bases with nobody out, only for Kendrys Morales to lift a fly ball to Adam Jones in right field. Jones for long was one of the better defensive center fielders and he got the chance to show off why, cutting down the tagging Billy McKinney for a double play that allowed the Orioles to survive the inning unscathed.

In the bottom of the third, Baltimore opened the scoring with a solo home run from rookie D.J. Peterson. Blue Jays hurler Marco Estrada made a mistake on a 1-2 count, hanging a breaking ball on the inside half of the plate in a very mashable zone. Peterson turned on the ball and got absolutely all of it, sending a towering drive high off of the foul pole to tally his first career home run.

That pitch was the only mistake that Estrada made in six innings of work. By the numbers he was marvelous—five hits, one walk, five strikeouts. It was certainly enough to get the win. But he left the game with his team trailing 1-0.

In the bottom of the seventh, Baltimore’s Cedric Mullins—who had been robbed of an RBI double by a leaping Teoscar Hernandez during his previous at-bat—broke through to get the O’s some insurance. With Stewart on third base, Mullins slapped a single past a diving Aledmys Diaz to extend the lead to 2-0, and that insurance run turned out to make all the difference in the world.

The next half-inning, McKinney took his chance to make up for the baserunning out in the fourth. Up with one out, he swung on the first pitch he saw from Miguel Castro and drove it to the seats in centerfield to cut the score to 2-1. But an inning later, Mychal Givens came on and retired the side in order for the save.

The win alone isn’t the reason for the Orioles to celebrate, though. The win clinched that Baltimore will finish with a better record than the 2003 Detroit Tigers, the worst team in MLB history. The story of the 2018 Orioles won’t end with any pennants, but it won’t end with a humiliating entry into the record books, either.

Jason Kipnis came in with 999 career MLB hits. With an 0-for-2 mark as he came up with the bases loaded in the bottom of the ninth inning and the Indians, he had a chance to join the Century Club in walk-off style. Then, he one-upped even that: collecting career hit number 1,000 on a walk-off grand slam:

Dallas Keuchel already had given up two runs and recorded just one out in the top of the first inning of Astros-Mariners. Things took a turn for the worse for the Houston pitcher:

Keuchel stayed in, but the Astros weren’t quite so capable of picking themselves off the canvas. Seattle rolled to a 9-0 victory.

Up 4-0 in the sixth, the Brewers had the Reds staggering on their feet, but it was catcher Manny Pina who delivered the knockout blow:

Pina started by taking a ball just off the edge of the plate, Matt Harvey‘s 92nd pitch. The battle ended with Harvey’s 104th pitch, and it ended with Pina launching a high line drive into the left-field bleachers. The three-run homer pushed the lead to 7-0, which would hold up as the final tally.

It was all tied up 2-2 in the bottom of the seventh when the Dodgers turned to Yasiel Puig to pinch hit with two runners on base and one out. Colorado reliever Scott Oberg served up a meatball, and Puig crushed a game-defining dinger to center. Then, he punctuated it with a Grade-A bat flip.

While it wasn’t a walk-off game-winner, it completely swung momentum.

Definitely Not The Defensive Play of the Night

It’s been a rough year for Eduardo Nunez, and his results against the rival Yankees did not turn for the better. Leading 1-0 in the bottom of the second, New York had the bases loaded and Aaron Judge in the batter’s box. Judge hit a ground ball to third base—not a slow dribbler, but a very routine play for everybody from Little League on up. Nunez allowed the ball to roll between his legs, and two unearned runs crossed the plate. The Yankees won 10-1, but Nunez’s lackadaisical glovework laid the framework for that with a pair of gift runs:

The Angels and A’s are scheduled for 3:05 p.m. ET as first pitch. That’s the lonely day game on the slate. Matt Shoemaker will start for the Angels as he tries to bounce back from injury; Edwin Jackson will go for the A’s as he hopes to continue the improbable-seeming run of success he has had in Oakland’s rotation.

Jorge Lopez, the rookie who took a perfect game deep just two starts ago, has been chosen to start in Detroit against Matt Boyd.

The Phillies and Braves are both in the Wild Card hunt, and they’ll get the chance to help their own odds while hurting their opponent hard. Vincent Velasquez will pitch for the Phillies, and he will be opposed by Kevin Gausman for Atlanta.

More Red Sox/Yankees action is on the schedule. Masahiro Tanaka vs. Eduardo Rodriguez, with the Red Sox trying to re-extend their lead to double digits in the AL East.