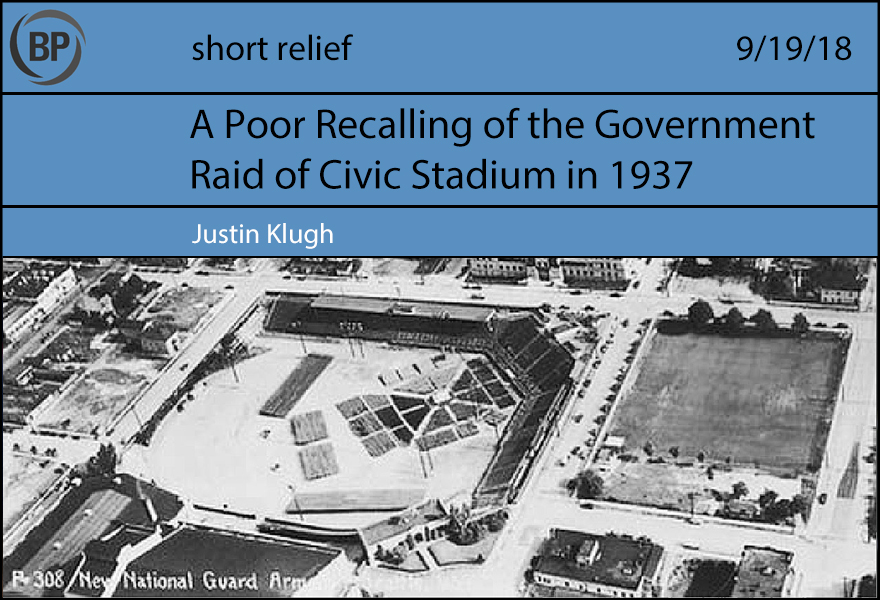 You know, baseball was once a game we respected. We’d spit our orange tobacco juice on the dirt and set each other’s cleats on fire and then sigh and look at the horizon and say, “Ah, yes. Truly, this is the sport of kings.” Together, we’d say that as a team, in unison. Haunting, people called it.

Anyway, it was back in the summer of 1937. I had known I wouldn’t be a pro ballplayer for some time; early in my career, I had taken seven bean balls to the head during a doubleheader before my shift at the silver mine. Since I worked in perpetual darkness, I hadn’t noticed I’d gone mostly blind for some time. Fortunately, that didn’t disqualify me from getting a solid government job in the good old U.S. of A. At the time, they were looking for hunters to put more animals on the endangered species list and people to trick farmers into using a surplus of government-manufactured poison as insecticide. Neither of that sounded appealing to me — I’ve always hated the outdoors — so I found a job at a federal tax agency that specialized in collecting debt from people at the worst possible times: during weddings, funerals, birthday parties, you know, to really make it the lowest possible moment.

Anyway, it came to our attention that fall that the Seattle Indians baseball team hadn’t been paying its “admission taxes.” These were taxes teams had to pay based on the amount of fans at the game, something I had never heard of. When I asked my superior if he had just made it up on the spot as I suspected, he slapped me twice with an open palm and demoted me to “gun bag carrier.” Back then we didn’t have holsters, you see, so during raids the squad would roll up and one of us would have to carry a huge burlap sack with everyone’s guns in it. It was extremely heavy and unavoidably dangerous.

The Indians were playing their final game of the season, and their last game ever at their home stadium, Civic Field. It was no wonder they hadn’t kept good books: Kids would just climb through cracks in the walls to go see a ball game for free. The game itself was awful; Seattle wound up losing on a hidden ball trick, which was so cruel and conniving an act that the government had an entire department dedicated to weaponizing it at that time.

Well, the Indians lost, and everybody was upset, but nobody was expecting us to roll up at just that moment and make a bad night even worse. But we did, and tried to do it all quiet-like, but as it happened every time, some of the people inside the stadium noticed us while we were beginning the awkward and convoluted process of distributing the guns from the gun sack, and panic set in. We were about to head inside and grab what was owed to the government, but then a squad of State Patrolmen came roaring onto the scene on motorcycles.

Now myself, I had never seen a motorcycle before, so I assumed the men riding them were attached to them, like centaurs with engines. I dove behind a newspaper stand and started screaming about the end times, but when I stuck my head out, I saw our superior arguing with theirs over who was going into the stadium first–turned out the Staties were there to raid the place as well. After some squabbling and slap-fighting, the guy leading the patrolmen turned to his men and shouted, “The Feds beat us to it; let’s grab the bleacher gates.”

Next thing I know, we’re all running inside, hooting and hollering and trying to figure out whose gun was whose, and we actually made it to the till, but it turns out the team’s owner, “Wee” Willie Coyle, had already been there, stuffed the cash in his pockets, and was about to make off with it when we showed up. Using his natural speed–the guy had been a quarterback at the University of Washington–he made off down the corridor, knocking people over, bills flying out of his fists, and yelled over his shoulder, “The City’s got the rent money, now you fellows can fight for the rest.”

Anyways, he wound up becoming lieutenant governor a few years later. But I helped a woman he’d collided with out of the trash can into which she had fallen and that was how I met your grandmother. Eventually the smell of garbage dissipated from her hair and we married the following summer, after I took a job tricking farmers into using that poison. 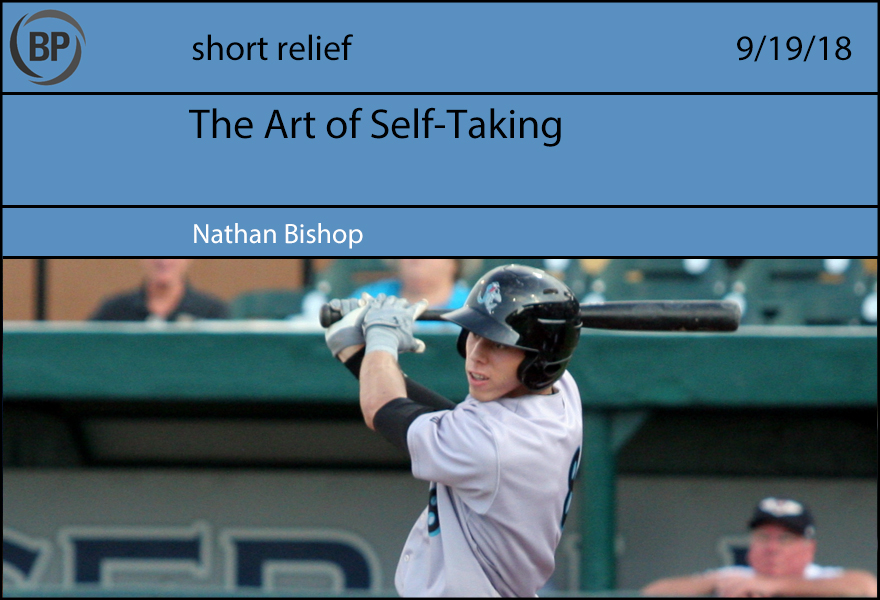 This space doesn’t have many of these, so let me hit you with what we call on Twitter a “Hot Take:” Christian Yelich is the best player in baseball.

Did I get you? Did your monocle fall into your Earl Grey? Have you phoned the butler to dictate a huffy telegram in response to this outrage? If any of these things are true, you’ve fallen victim to the classic ploy of the Hot Taker, in which I (The Hot Taker) deploy a sort of weaponized thought balloon in bad faith to see if you (The Hot Taken) will amuse me by firing your stockpile of ammunition to bring it down.

Let’s be definitive, for clarity’s sake: Christian Yelich is not the best player in baseball. That is Mike Trout. It has always been Mike Trout, and it always will be Mike Trout. In nomine Patris et Filii et Spiritus Sancti. Amen. A few heretics will claim otherwise, but they are either deploying precisely the technique outlined above, or they are your uncle. Beware the uncles; for some reason, they are the eternal wellspring of sports idiocy.

Christian Yelich is, as a reminder, not the best player in baseball. What he is, though, is one of the best players in baseball this year. Seriously, go look at the guy’s stats. Now go look at them from 2016 and 2017, compare that to his age, and prospect pedigree and tell me we couldn’t be seeing the rise of a Hall of Fame career arc.

I watched, in between parenting duties, and NFL duties, the highlights of Yelich’s game against the Reds on Sunday. He went 4-4, hit for the cycle, and roamed the outfield with the same loping, grass-devouring gait I always like to imagine Joe DiMaggio had in his heyday. I watched that and, well, friends I have no other way to say it: I Hot Taked (Hot took?) myself.

“That is the best player in baseball,” I thought.

I caught myself, immediately. I know what the stats say. The team that fate and Satan assigned me, the Seattle Mariners, plays in the same division as Mike Trout. He plays the Mariners 161 times a year. I get it. But, for a moment, I switched off my context filters, and for that moment, I saw the purity at the heart of what hot taking has so corrupted.

I think, before Twitter and Skip and WAR combined into a toxic stew, what we all wanted with these dramatic declarations of sports greatness was to be excited. We are (or at least I am) simple creatures, and speaking in binaries is the simple way we signify our allegiances. Christian Yelich isn’t the best player in baseball, but he’s close. He’s close and I think it would be really fun if, for a moment at least, he was. For a few seconds, I believed it to be true. It made me happy. 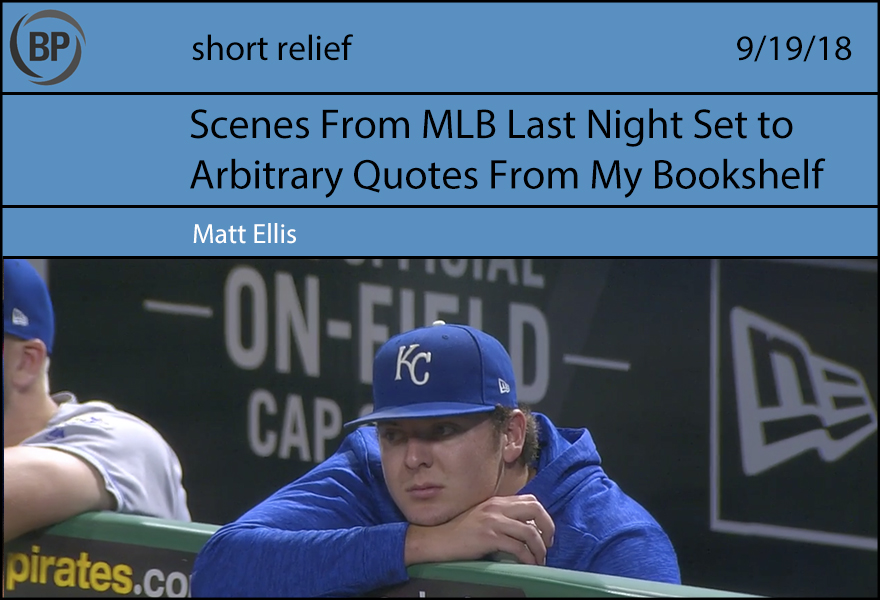 “I loathe my life; I will give free utterance to my complaint;

I will speak in the bitterness of my soul.

I will say to God, Do not condemn me; let me know why you contend against me.

Does it seem good to you to oppress, to despise the work of your hands

And favor the schemes of the wicked?

Do you have eyes of flesh?

Do you see as humans see?” 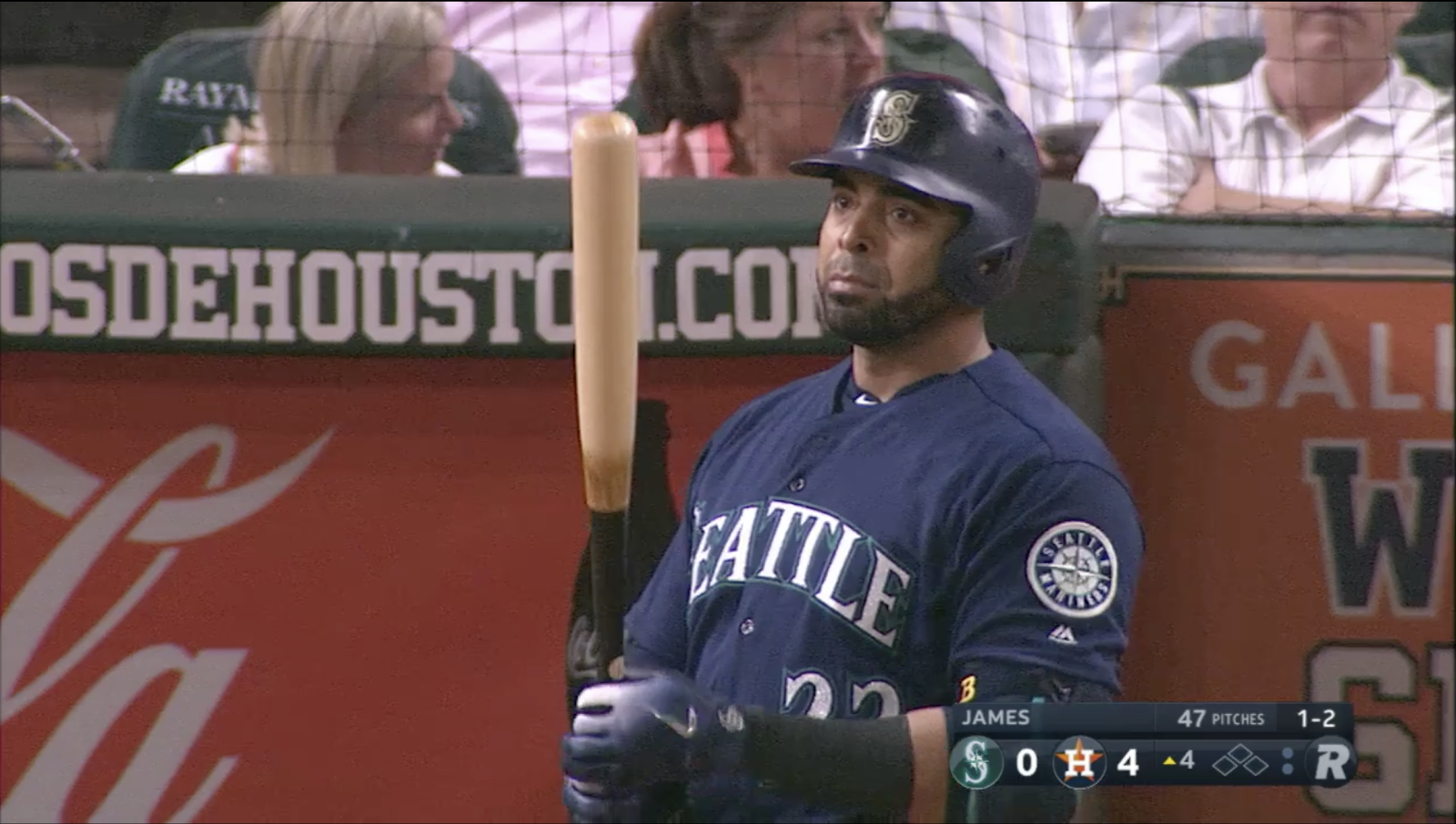 “Memory believes before knowing remembers. Believes longer than recollects, longer than knowing even wonders. Knows remembers believes a corridor in a big long garbled cold echoing building of dark red brick sootbleakened by more chimneys than its own, set in a grassless cinderstrewnpacked compound surrounded by smoking factory purlieus and enclosed by a ten foot steel-and-wire fence like a penitentiary or a zoo, where in random erratic surges, with sparrowlike childtrebling, orphans in identical and uniform blue denim in and out of remembering but in knowing constant as the bleak walls, the bleak windows were in rain soot from the yearly adjacenting chimneys streaked like black tears.” 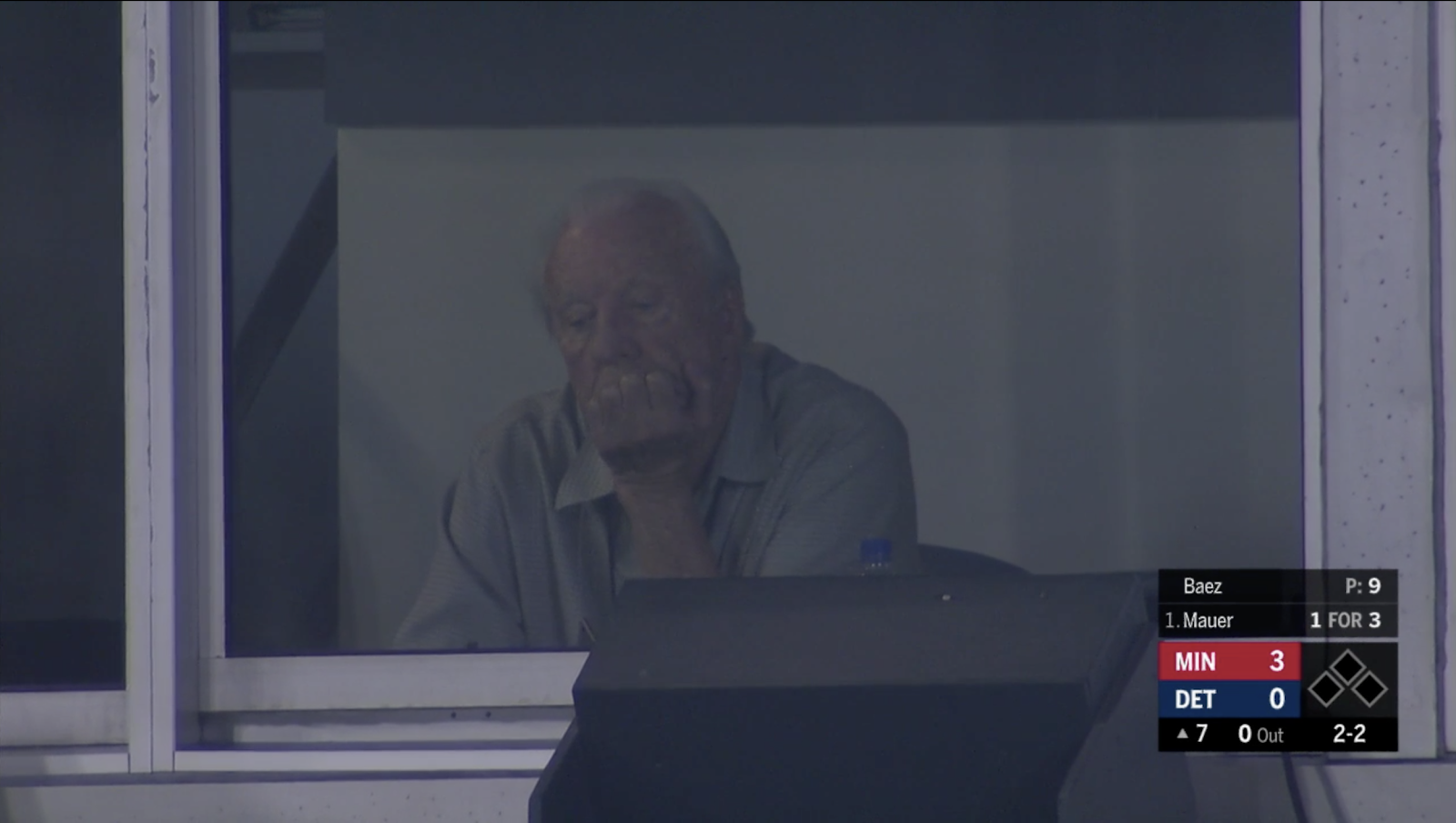 “I do not even suffer pain… Pain itself has lost its refreshment for me. If I were offered all the glories of the world or all the torments of the world, one would move me no more than the other; I would not turn over to the other side either to attain or to avoid. I am dying death. And what could divert me? Well, if I managed to see a faithfulness that withstood every ordeal, an enthusiasm that endured everything, a faith that moved mountains; if I were to become aware of an idea that joined the finite and the infinite.” 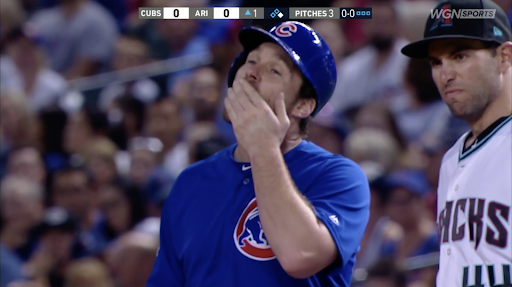 You need to be logged in to comment. Login or Subscribe
Shawn Shifflett
Justin Klugh's "Short Relief" may be the single greatest thing I have ever read.
Reply to Shawn