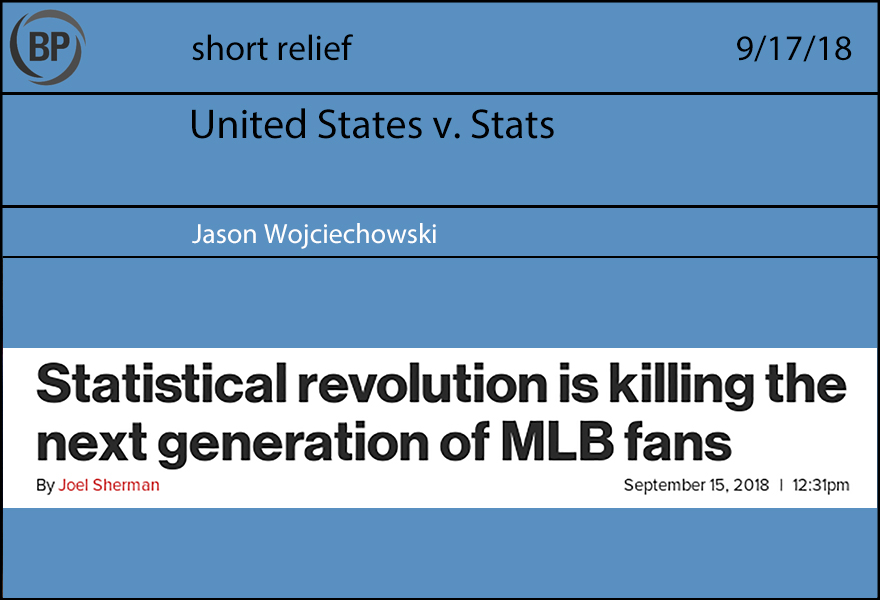 NEW YORK—The landmark criminal case against alleged heinous serial killer Stats took a turn yesterday as United States Attorney Geoffrey Berman, taking the rare step of handling the matter himself, watched a noted sabermetrician whom he had called as a witness hand the defense a gift-wrapped package of reasonable doubt for the jury.

Russell A. Carleton, author of The Shift: The Next Evolution in Baseball Thinking, testified with surprising candor about his role in introducing Stats to major-league front offices and the public at large. During the manhunt for Stats that followed its alleged bloody rampage through a nation of bright-eyed, young baseball fans, speculation was rampant that Carleton, among other notable figures like Sam Miller, Ben Lindbergh, and Nate Silver, might be arrested and charged with conspiracy related to the string of murders. Instead, sources say Carleton was placed in protective custody while Stats was still at large and has cooperated fully with the prosecution.

Carleton expressed surprise on the stand at what seemed to him a sudden turn in Stats’ behavior.

“Stats was indie for a long time. I thought of Stats like the Velvet Underground, where not many people were in the know, but everyone who was started a blog. But then those blogs got influential, and with influence comes backlash.”

Carleton described a long period of anger and recriminations between two camps, the pro-Stats and anti-Stats people.

“A lot of us were worried, back then, that this could turn ugly, though honestly it was more Stats’ followers and detractors we thought about. There was this proxy war going on while Stats seemed to stay above the fray. Stats always had an obsession with being objective and unemotional.”

Berman then led Carleton through the story of the long period of peace that preceded the violence, as the baseball community began incorporating Stats’ analytical modes, with the most successful organizations finding ways to blend the old and the new.

Berman asked, “This tragic incident—did it come out of nowhere to you?”

“I wish I could say it did,” Carleton replied, “but there were these troubling signs that some had started to point out. Stats was accused of having an anti-labor bias, of favoring ownership. Others said that it wasn’t Stats’ fault, it was the way management used Stats. Stats seemed to be under fire from a whole new direction. Though I have to say, Stats doing this to young people strikes me as ironic considering Stats was always in favor of cost-controlled players over free-agent veterans, which meant Stats leaned in favor of the young.”

Then came the turn that cast the outcome in doubt: The defense, seizing on Carleton’s use of the word “ironic,” asked whether that indicated doubts about Stats’ guilt.

“I’m not sure Stats did this,” Carleton responded, to gasps and the fainting of at least one member of the audience. Upon restoration of order, and while the prosecutors’ table conferred in pained whispers, Carleton continued, “It just seems so unlikely to me. I mean, I know Stats. I’ve known Stats for years. Decades, even. I’ve worked side-by-side with Stats. And I’ve also worked with young people. I just have a hard time seeing Stats being capable of killing an entire generation of fans.”

Berman’s office declined to comment on Carleton’s testimony and whether it came as a surprise. “Uh, duh,” was all an Assistant United States Attorney who requested anonymity would say.

Miller, Lindbergh, and Silver, among others, remain on the prosecution’s witness list, but whether Berman will risk digging the hole deeper in his attempt to get himself out of the trouble he put himself in by calling Carleton remains to be seen.

[NB: This is fiction. Russell and his book are real, but his words are my invention. He did authorize me to say that he found them amusing.] 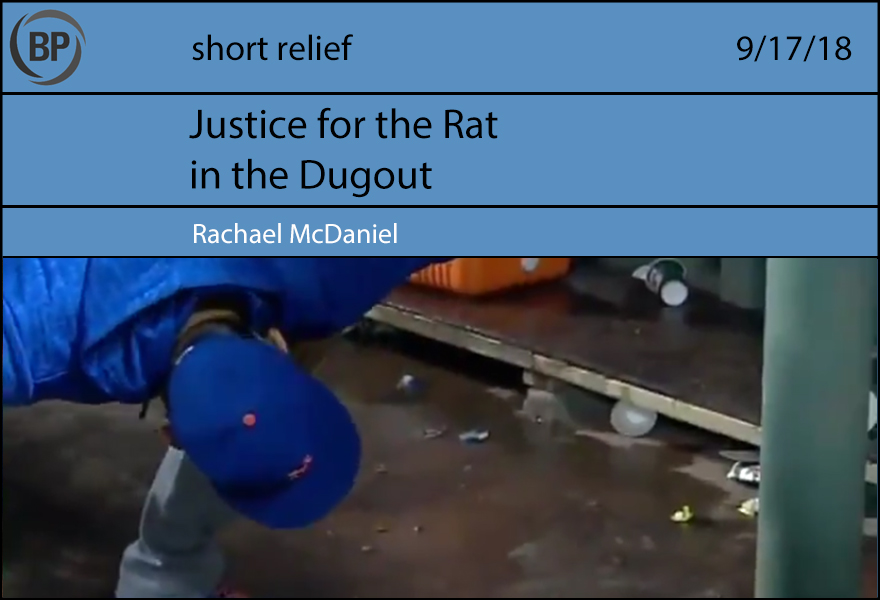 Everyone loves a good baseball rally animal. Whenever some wayward creature finds itself trapped and terrified in a stadium full of loud noises, bright lights, and general chaos, it tends to become instantly iconic. People have leapt to embrace the various cats and rodents and stick insects. Even a Canada goose, whom I know from experience to be a creature of hatred and malice, became a folk hero by virtue of first refusing to be chased from the outfield grass, and then making a tragically unsuccessful escape attempt. Aside from swarms of bees, it seems like players and fans are generally welcoming of animals that appear in games.

As well they should. The baseball season is very long. By September, if your team isn’t in a playoff race, the whole enterprise can feel like more of a really time-consuming, really unrewarding obligation. The kind of diversion that a creature on the field creates—the inevitable haphazard chase-down efforts of the groundskeepers, the escapades it has running about the field, the delightfully incongruous sight of the players standing around watching the creature’s escapades—is a nice break from the nullity. And when their appearances coincidence with a win, or a winning streak, and everyone starts irrationally invoking the creature’s lucky powers as a Rally Creature, it’s even better. Every baseball-interrupting animal deserves to be celebrated. They are pillars of the goddamn sport.

Which is why I was so outraged to see the treatment of the rat that appeared in the visitors’ dugout at Fenway on Friday. As the film Ratatouille taught us over a decade ago, rats have hard lives and just want to follow their dreams. But where multiple stick insects—stick insects!—have been welcomed into major-league dugouts as valued harbingers of success, this rat was subject to attempted bashing, to repeated exposure of its fun hiding places. Instead of being celebrated after it made its way out of sight, the Red Sox mocked it, feeding a lifeless imitation rat the delicious nuts that they were too craven and cowardly to offer the rat itself.

One look at this rat could tell you that it wasn’t an agent of malice. It was small and nervous, like every single other thing that runs in fear across a baseball field, and it probably just wanted to find some food and a quiet place to hide. Has baseball so much lost its conscience, in this year of our Lord 2018, that we can no longer give an animal-on-the-field distraction the welcome it deserves? Has the spirit that animated the celebration of, again, literally a stick insect disappeared from our beloved sport? That the rat was subject to oppression in the Mets dugout, when its appearance heralded an 8-0 Mets win, was an egregious display of cruelty.

Mets outfielder Dominic Smith stood up as the lone voice advocating for the rat after the game, calling it “a nice rat,” as opposed to some “mean rats” he’s known in the past. I hope more players stand up and do the same. 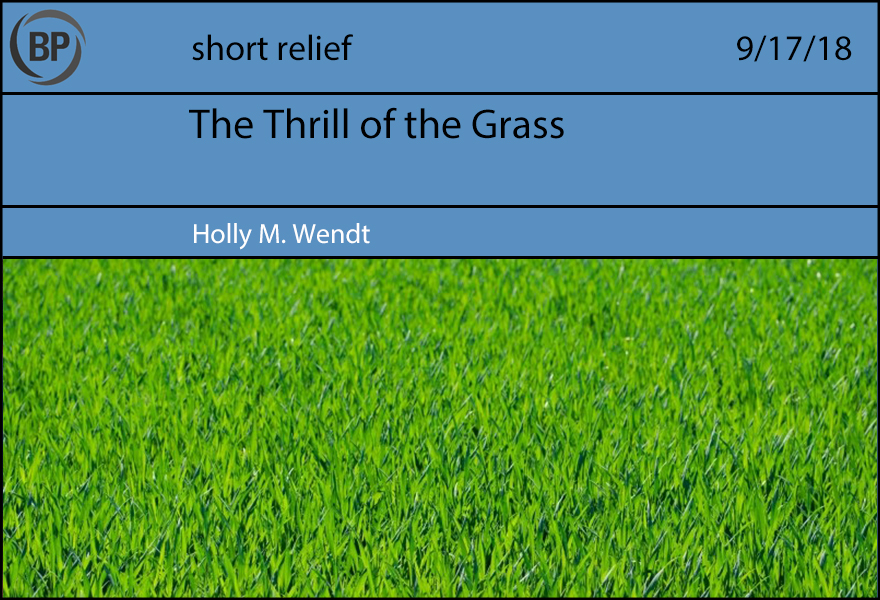 W.P. Kinsella, author of Shoeless Joe, wrote extensively about baseball. His 1984 short story, “The Thrill of the Grass,” is set during the baseball-less days of high summer in 1981, when a strike erased baseball from June 12 to August 10. While the conflict concerned itself with the rights of players in free agency and owners’ desire to be compensated therein, Kinsella’s story concerns itself with grass.

The premise is roguish (in the gentlest of ways): one devoted fan—and then many devoted fans—replace the unforgiving artificial turf in the local ballpark with real grass while the diamond lies fallow. The narrator picks a lock one night and then each one following; the green plastic carpet is cut away and flung, square by square, and supplanted with new sod, square by square.

One might think, given the centrality of secrecy in the story, the constant state of trespass, and the expectation that surely someone outside of this verdant plot might notice such extensive nocturnal activity, that getting caught would provide the bulk of the narrative tension. An unnamed character does suggest that his wife is having him followed, suspecting an affair; how disappointed and perplexed both she and the private detective must be that his interest lies with a darkened baseball field. But nothing comes of it. Indeed, as stories go, this isn’t one much concerned with consequence; its engine is completion rather than suspense, its language indefatigably optimistic, assured of not only its success but the very rightness of the act.

The narrator rhapsodizes about the grass itself, the sweet cradle for foot and ball created by a living thing, something with roots, and the grass’s tending—all is watered and raked, cosseted and clipped. The grass creates a spiritual fellowship, one that does not need speech or sermon, one of considerable metaphorical weight: the field’s new grass is made whole—the seams between the new chunks of sod grown invisible, all the divisions healed by care and light and water—just as the narrator feels a compromise coming between players and owners.

The final lines frame this renegade action as a gift to the team which must soon return to receive it: “I lower my face to the silvered grass, which, wonder of wonders, already has the ephemeral odors of baseball about it.”