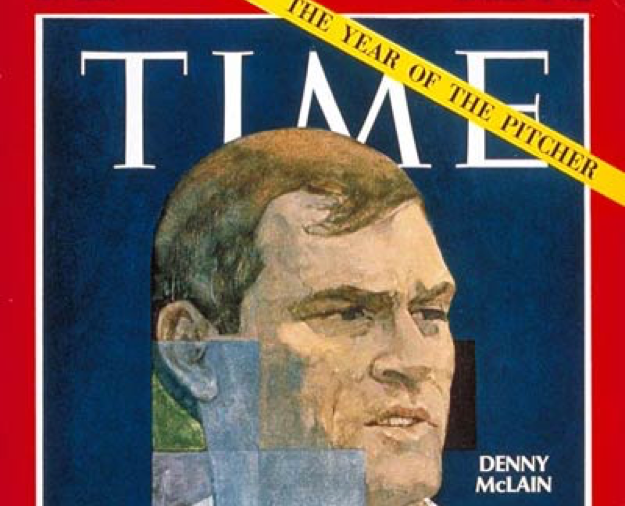 On September 14, 1968, Tigers right-hander Denny McLain took the mound against the Athletics. Over his previous four starts, all complete-game victories, McLain had struck out 44 while walking just six over 36 innings, running his record to 29-5. The last pitcher credited with 30 victories in a season was Dizzy Dean for the 1934 Cardinals. The last American League pitcher was Lefty Grove for the 1931 Athletics. The only other pitcher since the Deadball Era to have won 30 was Jim Bagby with the 1920 Indians. And the only Tigers pitcher to have won 30 … well, there wasn’t one. The club record was 29, held by George Mullin in 1909 and Hal Newhouser in 1944. McLain was pursuing history.

Detroit’s Norm Cash responded with a three-run blast in the bottom of the fourth inning, putting the Tigers on top 3-2. But Oakland tied the score at three in the top of the fifth inning, and another Jackson home run made it 4-3 in the sixth.

McLain faced the minimum number of batters after that, but Detroit still trailed 4-3 heading into the last of the ninth. McLain was on the hook for the loss. Al Kaline pinch-hit for him and drew a walk. With one out, center fielder Mickey Stanley singled him to third base. Right fielder Jim Northrup grounded to first base as Kaline broke for home. A’s first baseman Danny Cater fielded Northrup’s grounder but threw over the head of catcher Dave Duncan. Kaline scored the tying run and Stanley advanced to third. Cleanup hitter Willie Horton lined a single to left field, Stanley scored, and McLain was the AL’s first 30-game winner in 37 years.

McLain and the Tigers weren’t the only people thrilled by his 30th victory. The game fell on a Saturday, so it was NBC’s nationally broadcast “Game of the Week.” NBC estimated that the game drew 13 million viewers compared to the average of 9-10 million for its Saturday afternoon games.

The day after McLain’s 30th victory, the Cardinals were in Houston for the rubber game of a three-game series with the Astros. The Cardinals were favorites to win the National League in 1968. From 1960 to 1967, they had won 700 games, a total surpassed by only the New York transplants in San Francisco (724) and Los Angeles (717). They had scored the fourth-most runs in the league while allowing the third-fewest during the span. They were the defending World Champions and won the title in 1964 as well, with star pitcher Bob Gibson named the MVP of each World Series.

Heading into the season, St. Louis boasted All-Stars at almost every position: Catcher Tim McCarver (1966-1967), first baseman Orlando Cepeda (1959-1964, 1967), second baseman Julian Javier (1963), left fielder Lou Brock (1967), center fielder Curt Flood (1964, 1966), and right fielder Roger Maris (1959-1962), along with Gibson. The 1967 champions were second in the league in both runs scored and runs allowed, and had led the league in stolen bases as well. Cepeda was MVP, McCarver was runner-up, and Brock, Javier, Flood, Gibson, and pitcher Dick Hughes collected votes as well. Hughes was second to Tom Seaver in the Rookie of the Year balloting[1]. Flood and Gibson won Gold Glove awards.

So when the Cardinals started the season 3-0, were never below .500 during the season, and moved into sole possession of first place for good on June 1, nobody was surprised. For all the weirdness that occurred in 1968, it was a year devoid of pennant races. The Cardinals had a 10-game lead at the All-Star break and ran it up to 15 games on August 1.

They clinched the pennant on September 15. Their 7-4 win over the Astros, combined with Cincinnati’s 4-0 victory over San Francisco, gave the Cardinals a 12.5-game lead with 11 games to play. Flood went 5-for-5 and scored two runs. He was, to that point, the only player to get five hits in a nine-inning game twice in 1968. (Cincinnati’s Pete Rose would join him 13 days later.)

In the top of the third inning, trailing Houston 2-1, Flood singled with one out, bringing Roger Maris to the plate. Maris had already announced that 1968 would be his final season. He’d turned 34 just five days earlier and had been reduced to a platoon role; he’d have only 20 plate appearances in 1968 against southpaw pitchers. He’d hit .255/.307/.374 for the year, still above average (.292 True Average; league average is .260) in the Year of the Pitcher. But he came to the plate having hit only four home runs, a rate of a homer every 73.5 at bats. That was obviously a far cry from the 11.4 rate during his record-setting 1961.

Facing flame-throwing Astros righ-thander Don Wilson, who’d set a National League record with 18 strikeouts against Cincinnati on July 14 and had whiffed 16 Reds five days earlier, Maris struck out in the first inning, giving him a .250/.250/.250 career line against Wilson in eight appearances. With Flood on base, though, Maris homered, giving the Cardinals a 3-2 lead that they wouldn’t relinquish. It would be homer no. 275 for Maris and the last of his 12-year career. He ranked, at the time, no. 36 on the all-time career list.

On September 11, the Mets beat the Cubs, 1-0, in Chicago. Three Mets pitchers scattered two singles and two walks. The losing pitcher was Chicago’s Fergie Jenkins, who pitched a complete game. It was the fifth time Jenkins was charged with a loss in game in which the Cubs lost 1-0. It tied an all-time record that has not been equaled or surpassed since.

You need to be logged in to comment. Login or Subscribe
ofmontreal
0 ROY votes for Jackson sounds exactly right unfortunately. Love this series.
Reply to ofmontreal
Rob Mains
Thanks for reading it!
Reply to Rob