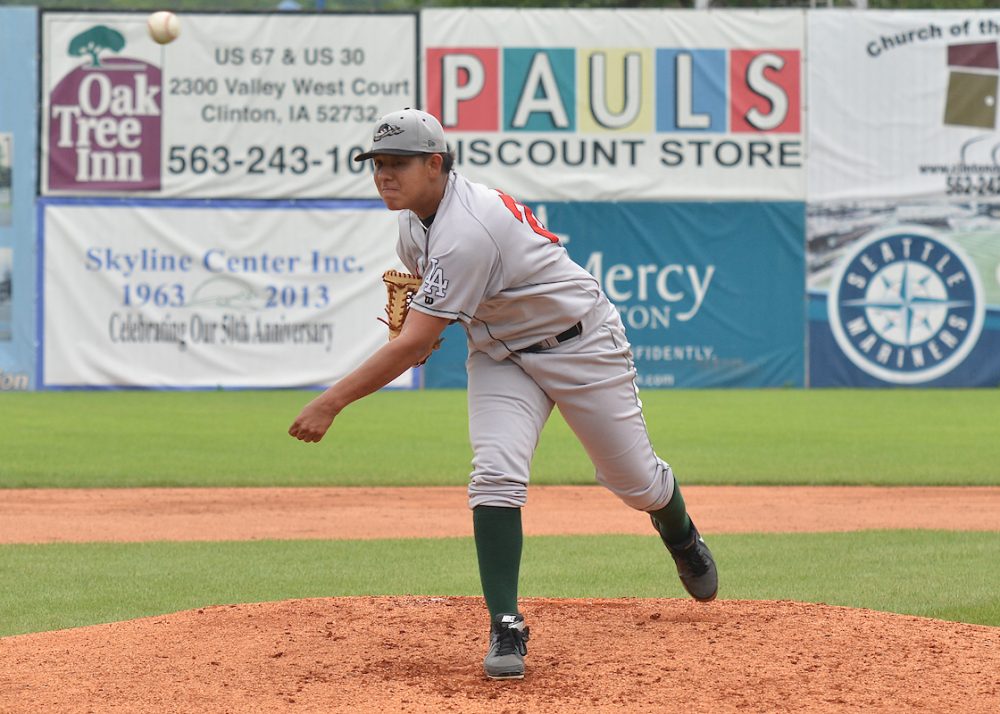 Iwakuma should have been an Athletic. Oakland won the posting bid in 2010, and the right to negotiate with the Rakuten Golden Eagles, but a combination of thriftiness and principles kept Iwakuma in Japan. Two years later, this time as a free agent, Iwakuma allegedly turned down higher offers to sign with the Mariners, citing his ”comfort level with the organization and the city.” He signed a one-year contract for just $1.5 million.

He waited 15 games to make his major league debut—four innings of mop up duty against the Tigers, amid one of Seattle’s indistinguishable lost seasons. Besides then-manager Eric Wedge, nobody really knows why it took so long for Iwakuma to appear. After his debut, he waited eight days to pitch again. Then, nine days. Then, two weeks. By June 1st, a man with more than a thousand NPL innings in his past, and a third place Cy Young finish and no-hitter in his future, had made five appearances in the major leagues. He had not yet started a game; Blake Beavan and Hector Noesi had 20 starts between them.

Iwakuma should have been a Dodger. Hell, he was a Dodger. Iwakuma and Los Angeles agreed to a three-year, $45 million dollar deal during the winter of 2015. Before Iwakuma could put pen to paper, a doctor somewhere looked at some kind of scan of Iwakuma’s shoulder, slowly removed his glasses, made a baleful, hound dog look at Farhan Zaidi, and shook his head. Thanks to that head shake, new Mariner GM Jerry Dipoto pulled off a rockstar move:

Jerry Dipoto delivers a special gift to the front office at the #Mariners holiday party: Kuma is back. pic.twitter.com/8Bo8Y93ub2

In 2016, as Felix Hernandez, James Paxton, and every other Mariner starting pitcher deteriorated over the season, Iwakuma and his Grim Shoulder made every start, throwing 199 quality innings.

Iwakuma should not have been an Everett Aquasock. A 36-year old man, a devoted husband and father and an accomplished pitcher on both sides of the globe, he didn’t belong with teenagers on a short-season roster. Yet, a few weeks ago, there he was, starting game one in the Northwest League playoffs. Iwakuma threw two innings, and allowed three runs to the Spokane Indians.

With his contract fulfilled, Iwakuma is walking away from Major League Baseball. He announced he will return home and attempt to pitch in the NPL. His career has taken him around the world, through multiple surgeries and rehabs, and across the professional and personal crossroads that confront us all. He is many things, and with different timing and circumstance could have perhaps been many more. His baseball card, however, says one thing, and one thing only:

The phenom phase might be over for Urias. No longer is he the kid who came up at 19 and pitched opposite Noah Syndergaard in his debut. His prospect pedigree will remain a part of his story, but after a severe shoulder injury kept him off big-league mounds for more than 14 months, that pedigree really isn’t a fair basis for projecting his future anymore.

The Dodgers still expect him to be a solid starting pitcher in the long run, but this fall, he’s a relief option. That’s fine; Alex Wood was already squeezed out to accommodate Ross Stripling’s return. The pertinent question of the hour is whether Urias can carve out a role in the Dodgers’ October bullpen. Openings are scarce and the rotation will shorten even more, but the Dodgers have lacked quality bullpen depth for most of the season. The organization also sent Tony Cingrani on a rehab assignment in the California League Friday, and it’s easy to imagine Cingrani and Urias competing for a single spot in the playoff relief corps. Cingrani has more experience in that kind of role and is likely to be tougher on lefties; Urias was moderately stretched out in the minors and could better give the team multiple innings of work.

If he stays healthy and looks relatively durable, Urias might have the edge, in part from his ability to pick up free outs through pickoffs. When he came up, he famously had at least two very good pickoff moves, and he nabbed six base runners (plus one in the postseason) in 2016 alone. Cingrani controls the running game at least as effectively as Urias, but in the right situation, that very small skill might be enough to make Urias the more appealing option. Much will depend on whether his fastball (from that short frame, and without great extension) can sustain the life it showed in his season debut Saturday. When he’s not getting late action on that pitch, Urias simply isn’t the kind of dominant hurler teams look for when building a bullpen for a short series. — Matthew Trueblood

It was as anonymous a return to baseball as could be engineered: the final inning of a losing game, hidden behind the catcher’s mask, not even a plate appearance to etch into the scorecards. Only the armored, lumbering six-four frame, the Kevin Smith eyes and the darting, heavy glove betrayed the fact that Saltalamacchia was finally, and for the final time, a big league baseball player.

The 12-year major league veteran spent 2018 on the Toledo Mud Hens bench, batting .174/.285/.284 against Triple-A pitching and showing up early to set up poker games for his younger brethren. The role of quasi-coach has suited him, and now that Fifth Third Field is closed up and the September major-league numbers meaningless, he’ll enjoy a small, very private retirement tour of the professional baseball life, clubhouses and benches, talk and laughter.

It’s a quiet end for a player whose notoriety was always just beyond his grasp, from his first-round draft status to his inclusion in the Mark Teixeira trade to his contract with the Marlins to even his own name, still the longest in history, emblazoned across the shoulder blades of his jersey like a general’s oversized epaulettes. He earned $30 million over a four-win career, tasted the champagne and earned a diamond ring. He went 1-26 with 16 strikeouts in 2017 as a Blue Jay. These are all things that happen to baseball players, but they seemed magnified on Saltalamacchia, one of those players who somehow felt like they owed us more.

Maybe it’s because the catcher failed in that strangest and most invisible way: he never quite figured out how to put the bat in the exact right place. It’s such a tiny thing, so little for batting-average-reliant fans to ask. Even without it, Saltalamacchia did okay. Today, after all, he gets to be a big league baseball player.  — Patrick Dubuque