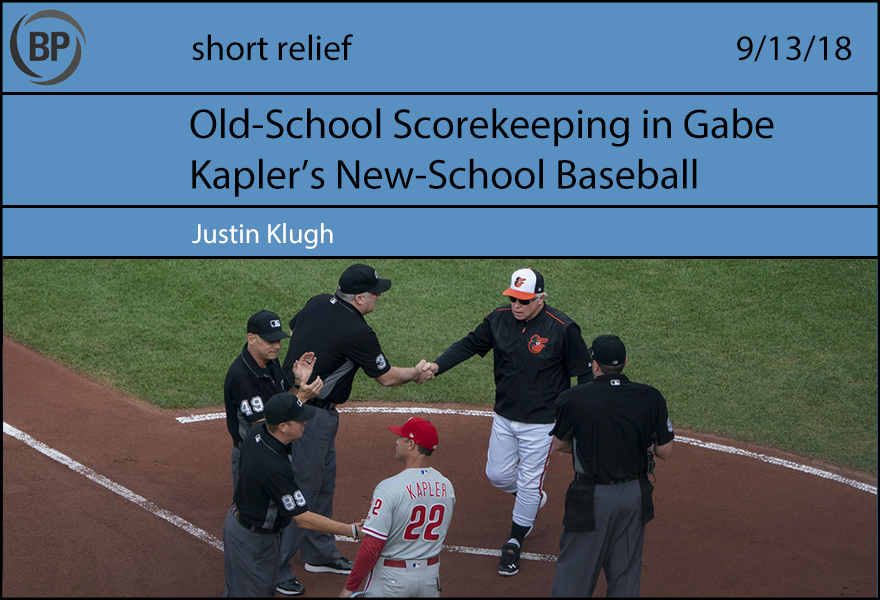 Baseball’s hieroglyphic system is a point of pride to pass on from nerd to nerd, usually between those who share a bloodline. Being able to trace the action of a full nine innings through the scribbles of a scorecard is a source of pride and satisfaction.

“I can just check the box score online,” you might say. “They even have play-by-play breakdowns of the action, or condensed games to watch if I really want to know what happened.”

Ha ha, my friend, that may be. But how can you check out all those resources online when someone has maliciously smashed your laptop into bits and severed the connection to the wifi router? Looks like our only option is my scorebook. Thank goodness I paid such meticulous attention to today’s Phillies-Nationals game!

But what’s this? An added challenge? Gabe Kapler is the Phillies manager, and he’s quite aggressive in making swaps, moving players around the field, pinch running, and replacing pitchers based on individual matchups. And it’s September, meaning the rosters have expanded to 40 players, so there’s more players for him to use than ever! Sounds like a scorekeeper’s nightmare! Don’t worry, friend, I have the utmost confidence that I can keep up. Have a seat, and let’s enjoy this game together.

What’s that? You’re trying to leave instead of enjoying America’s pastime with me in this windowless room? You’re welcome to do so, but I think you may find that same careless person has broken off all the door knobs in this apartment, presumably with the laptop of yours that was carelessly destroyed. Looks like we’re stuck together! I’m sure it will go fine and nothing will throw me into a blacked-out state from which I emerge surrounded by other people’s smashed belongings.

Everything’s normal. All of the numbers, dashes, and slanted lines are in organized columns. This is an art form. What other sport can exist in such mathematical poetry, I ask you? I knew this would be a treat. Go on, take a look–that’s right. That’s evidence of Rhys Hoskins flying out to right field in pencil-written form. Pretty cool, right? What’s that? “Hungry?” I think you’ll find eating is far more satisfying with a full scorecard.

The Phillies make this especially easy by striking out all the time. Oh, what’s this? A substitution! Now’s when the real fun begins. Let’s just insert this new fella’s name under the player he’s replacing, and… hmm. They sure don’t give you a lot of space in there. Well that’s all right if our perfectly arranged columns go a little askew. It shows how curious the game got! Which, it is curious for a manager to remove his No. 3 hitter from game after two at-bats for no reason. But no matter! This is the game in its purest form, I tell you. And you agree, of course. I can see it in your concerned expression.

I… wait. So Kingery pinch ran for Bour but then Knapp pinch hit for Kingery and now Florimon is playing shortstop? They only put room for one sub. That’s okay, I’ll just… I’ll squeeze a few names in here. Now, what do you think I’m supposed to do about pitcher subs? Should I put a new one into the lineup each time there’s a reliever?

Wait how did Santana move to first base? Where was he before? “Third?!” Seriously? How did I not even notice that? And he was leading off? Does that mean Bour was at shortstop? That can’t be right. Here, I’ll just write Kingery’s name over Bour’s, and then I’ll just know what that means. Or wait. I have an eraser. But look, see; it’s just smudging the pencil all over the place. Wait! I think I got it: Santana started at third, Bour was at first, Cabrera was at third, and Mike Fontenot was at short. No, no—Fontenot isn’t on the team anymore. Did I say “third” twice? How many positions are there agai

NO. YOU CAN’T SWITCH PITCHERS AFTER ONE PITCH. THAT’S NOT—WHO DOES THAT. GOD DAMN IT, I BROKE MY PENCIL AGAIN. I’LL HAVE TO GNAW A NEW POINT INTO IT. DO YOU THINK PENCIL LEAD IS TOXIC. IS THAT LEAD POISONING? HERE, PASS ME ANOTHER SCORECARD. I’LL STAPLE IT TO THE BOTTOM OF THIS ONE FOR MORE SPACE. OUCH, MY GUMS.

See, the thing is, they make these boxes so darn small that you have to, you know, really work to squeeze it in there when the manager does something normal like use the same pitcher for a one-on-one match-up with Trea Turner that he used in game one of this doubleheader, only to have that pitcher walk him both times. Thank god you don’t have to keep track of the pitchers. What? “There’s a whole section for the pitchers, too?” Oh my god. You know what’s insane? Gabe Kapler took two pitchers out of the game while I was just talking. How are you supposed to… ah well. At this point, I’ve developed a taste for the pencils, so I might as well just eat the rest. No, we can’t just not know baseball statistics. They’re too important. 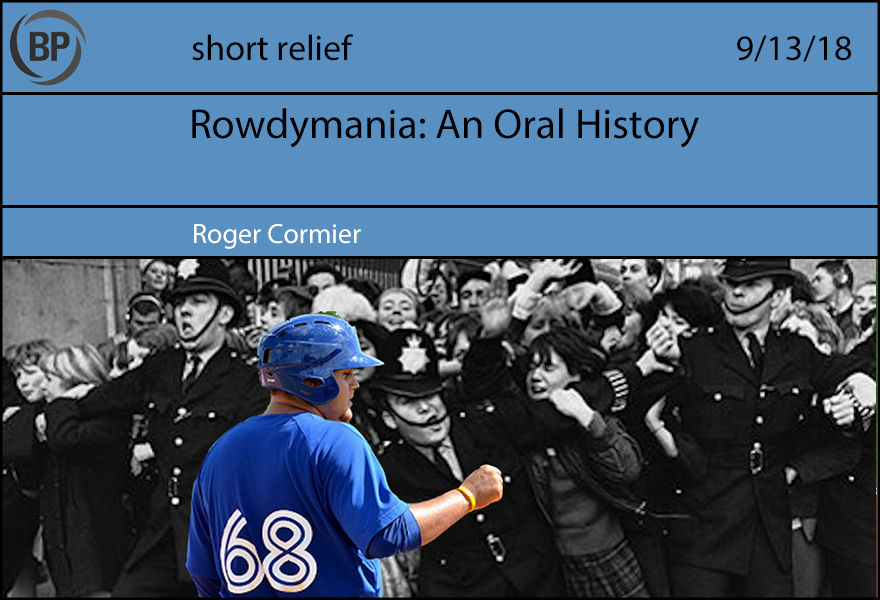 On Wednesday, September 5, 2018 A.D., 23 year-old Ryan John “Rowdy” Tellez made his major league debut in the eighth inning of a Tampa Bay Rays-Toronto Blue Jays showdown at the Rogers Centre.

Curtis Granderson, former Blue Jay, current Milwaukee Brewer: When I heard Rowdy got into a game, I was immediately furious that the Blue Jays traded me. Rowdy was literally the only reason why I signed with Toronto in the first place. I’m ashamed to admit I think I frowned at a teenager that night.

Vladimir Guerrero Jr., top Blue Jays and MLB prospect: Rowdy doubled in his first at-bat, off of the first pitch. I’m sure it was cool. I didn’t watch. I was too busy still not promoted to the big leagues for poppycock reasons.

In Rowdy’s starting debut the next evening against the Cleveland Indians, Tellez went 3 for 4. All three of his hits were doubles. He became the first player in the live-ball era to record extra-base hits in each of his first three career plate appearances, and the first with four or more XBHs in his first five.

Randal Grichuk, Blue Jays right fielder: They should have sent a poet.

T.S. Eliot, deceased poet: It is always neat to see a young man start his baseball career with a whizbang like that.

His Eminence Ferdinand “Rowdy” Ferguson, the first guy to accidentally have sex in the Skydome hotel with Blue Jays fans watching: Please stop calling me for quotes.

The next night, Tellez went 2 for 5. Yes, both of those hits were doubles.

Carlos Carrasco, Cleveland starting pitcher: I served up both of those doubles. No shame in that. The guy ended racism.

T.S. Eliot: #Actually, I think Cleveland didn’t wear Chief Yahoo on their sleeve during that series for some Canadian reason.

On Saturday night, Tellez did not double: he homered. Rowdy also hit his first major league single. It made him the first player since at least 1908 to hit for extra bases seven times or more in his first four major league games.

Bob Woodward, author: A person familiar with his thinking says Binghamton Rumble Ponies mascot Rowdy the Pony is very proud of his namesake. Same goes for Rowdy, the dog from Scrubs.

Rowderick Rembrandt, Blue Jays season ticket holder since 1985: I wish we didn’t have to wait so long for Rowdy. This dumb wasteland of a franchise. Indeed, April is the crullest month.