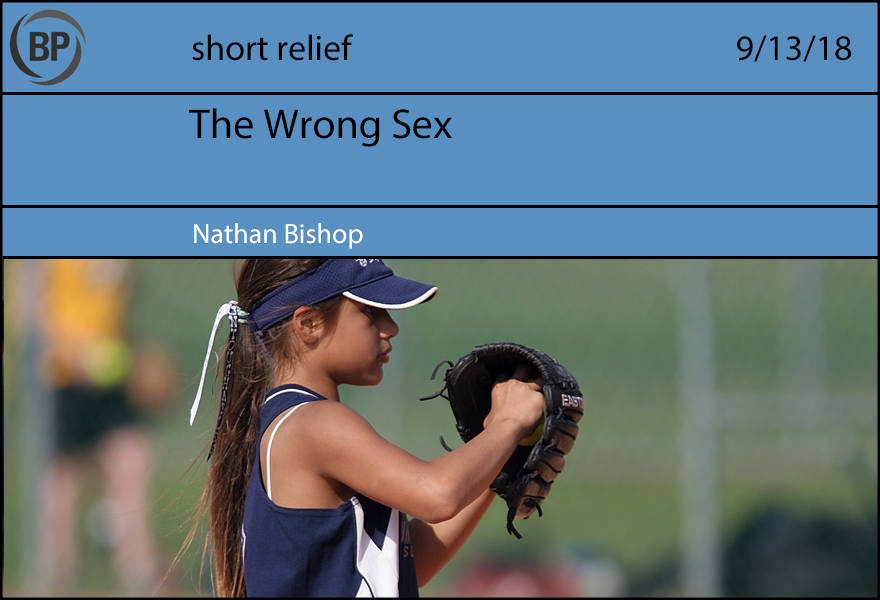 When I was a child we went and visited some friends. The family had three children: two boys, and a girl. Playing two hand touch in the front yard, the daughter proved the most gifted athlete, prompting the father of the family to loudly exclaim “Three kids and the one athlete I got was the wrong sex.” He was a good man and meant nothing by it,  his words fueled by thousands of years of conditioning that made that joke “funny,” somehow.

My daughter has a bad habit of waiting too long to use the bathroom. Ninety-seven percent of the time or so she makes it just fine. She is seven and not a fool. Her issue is simply enjoying herself too much, being too enveloped in whatever she is doing at the time to stop.

With school starting, this particular quirk (one of many; she’s a very quirky girl) has taken up a bit more of my conscious energy than I’d prefer. Once all your children are of a certain age, you are just super ready to stop diverting precious mental energy to other people’s bathroom needs. Nonetheless, she is learning, one desperate sprint at a time, the route to the girl’s room from her new classroom, and it’s something we talk about after school.

Yesterday, she told us she ran, in her usual self-imposed panic, when she was stopped by the janitor. He meant well but told her she had to “give him a high five” before she could use the bathroom. She did high five. She did not make it to the restroom. There was zero malice, or ill intent in his actions. Thousands of years of conditioning told him that setting up a playful barrier between a little girl and a simple human need was OK, funny even.

My daughter is a gifted athlete. I say that as a biased parent, but also as someone who is watching her casually learn and excel at sports at a faster rate than her peers. Last spring was gymnastics. She’s currently running circles around her soccer team. Soon it will be basketball signups. This spring she’s going to play baseball. Or softball. We aren’t sure which. She’ll play well in whichever she decides, and both are great games. I’m hoping she chooses baseball. I hope she hits third and strikes out all the boys.

She’s going to start learning soon that the world has set many, many barriers up for her, some of them invisible, others unimaginable and intricate. She’s going to have to fight for the simple things: playing sports against the highest competition, using the bathroom unencumbered, things I’ve always taken for granted.

Our evenings are currently filled with watching Sue Bird and Brianna Stewart lead the Seattle Storm to (fingers crossed) their 3rd WNBA title. We missed the Women’s Baseball World Cup. We won’t miss the next one. 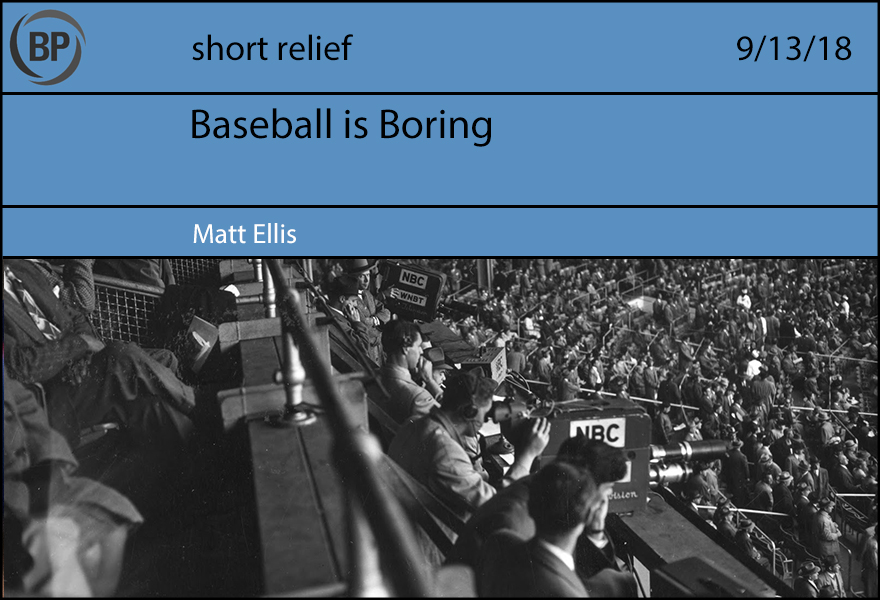 Baseball needs defending these days. I don’t mean this in the pearl-clutching sense, the cultural war that emerges when one particular social group decides their Thing is more Important than the other Thing. But the debate has shifted in recent years from ontological statements about the history of the institution to tiny technocratic fixes designed to raise viewership in the middle of our current demographic shift (which, of course, just let people watch it affordably, but then again, I wouldn’t have to type any more after that, so…).

I feel like there are two times a year where the Baseball Defenders™ really get going. The first is in late February, when the narratives of each Spring Training start to give way to that awkward window where we just want the regular season to start. The second is around this time, when football starts up again and two-thirds of the teams are out of the running, leaving local media in each region to shift to following the pigskin folks, and baseball people to cry bloody murder hoping for more eyes on the screen.

In a way it makes sense. I’m not a football fan outside of enjoying some GIFs on Twitter now and then, and I end up finding myself echoing the insights of Juan Uribe every year around this time. But today I started thinking about What It All Means and I realized that perhaps defending baseball doesn’t require some kind of grand statement about the essential nature of the game, its history. Here is a current look at the scoreboard as of 8:00 PM EST on Tuesday, September 11th, 2018: 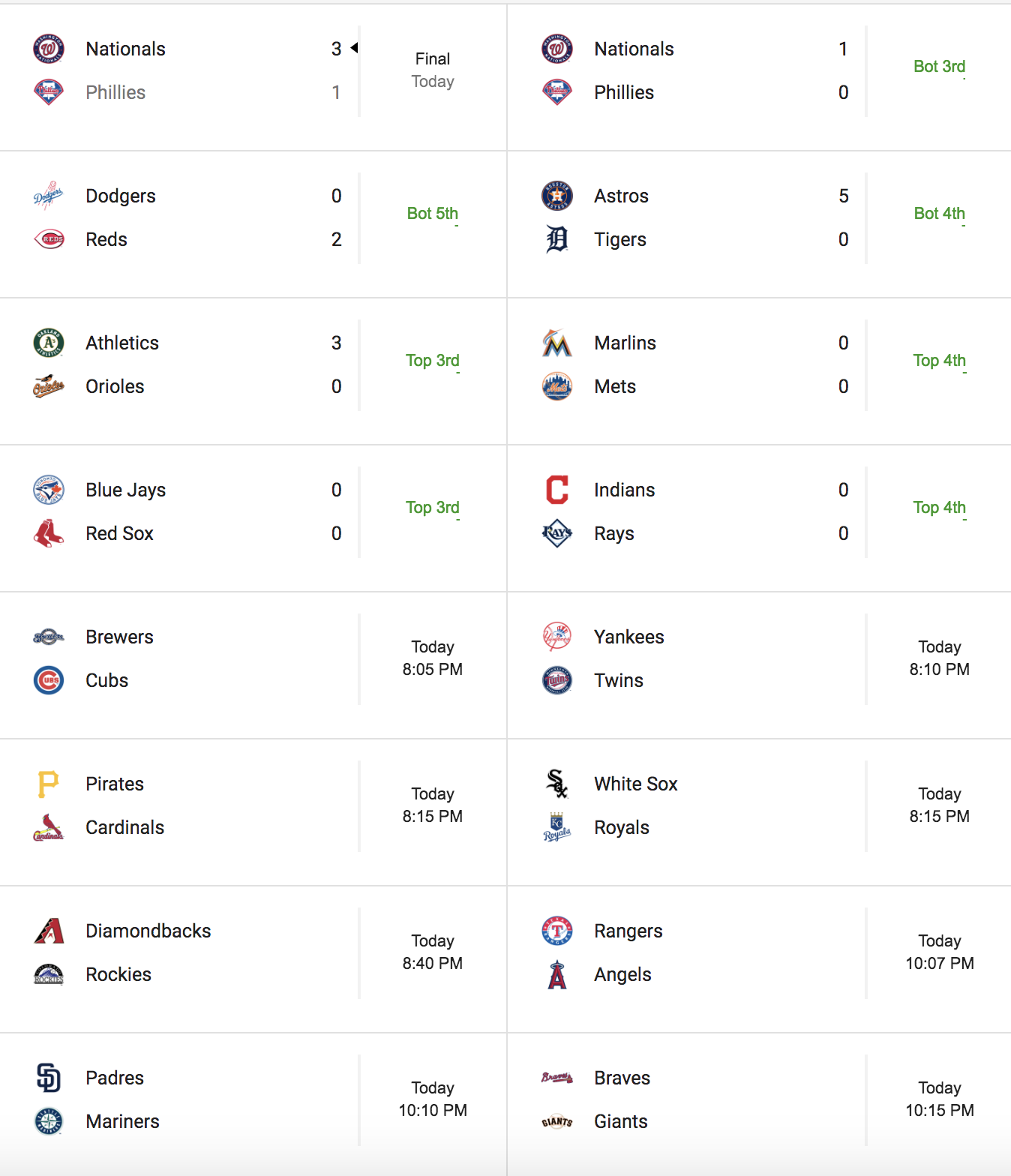 A couple of things jump out. First, it’s 8 PM and eight games have yet to start, THIS IS INSANE DON’T PEOPLE SLEEP, I’M NO LONGER IN MY TWENTIES!? Second, there are maybe, what, three games between teams with playoff implications? I’m not counting games between playoff contenders and the Orioles, of course, I mean the high-drama of a late-season push for relevance. I think if we want to defend the cultural utility of America’s true game we need to recognize that accepting an abysmally boring Tuesday night broadcast counter to last night’s Exciting Football is precisely how we save baseball. I think we should accept the Mariners and the Padres bunting at 1:35 AM, or have fun watching the Marlins and the Mets I sure don’t need to finish that sentence, do I?

There are many times more bad movies than Ingmar Bergman’s filmography, more McDonald’s than authentic family owned Mexican restaurants near the American Southwest border. To save baseball from itself might require accepting that banality as constitutive of what it means to care about an exciting game in late October. Baseball is boring, and this is my manifesto to come. Long live boring. Long live boring, and long live baseball.