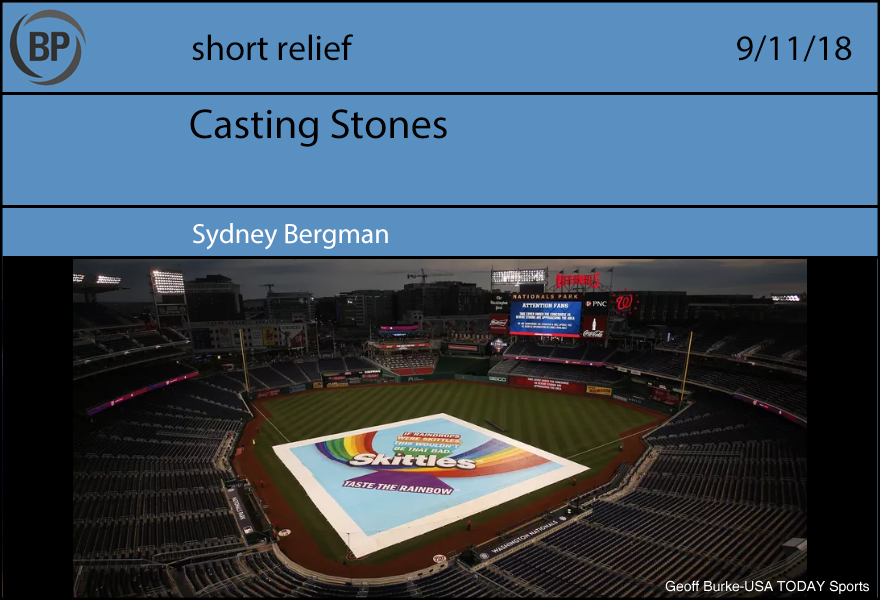 It’s been raining in D.C. for either 72 hours, or possibly 40 days and 40 nights. We haven’t rounded up two of every relief pitcher for the ark quite yet, but it’s been a wet couple of days.

There’s something biblical about this kind of constant, soaking rain, particularly in a city with poor drainage, built on an actual swamp.

It’s been an ideal time to take stock of what the Nationals have done right and where we’ve strayed from our path, given that the season is, for all purposes, over. There’s a tendency among baseball fans to wallow in past miseries and failures. It manifests differently in every fanbase, but for the Nationals, it’s Game 5 of the 2012 NLDS — the point at which everything going right got transmuted into something wrong. This was the game where the Nationals were one strike away from winning the division series, a feat that they’ve never actually accomplished, as every person with a baseball Twitter brings up a totally normal amount. Drew Storen failed to strike out Pete Kozma, and the Nationals became the Nationals.

I was talking to my sister, a mental-health professional, about the game and how much it lingers, even years later. Somewhat facetiously I asked if it was possible to get over the past hurt of that loss. Because she has a healthy attitude toward my nonsense, which is to say, little patience for it, she responded, “Well, do you want to get over it?”

Today’s the second day of Rosh Hashanah, and for many, it means a time to perform the ritual of Tashlikh, in which we cast our sins, symbolized by bread or small rocks, into moving bodies of water. To let go of the things we’ve been holding onto and to begin a time of serious self-assessment, of confronting the past and learning to forgive one another, and ourselves. Because at the end of the day, even the biggest hurt in baseball is no more than a small, if persistent, stone. But gather enough of them and they’ll weigh you down.

At least, with all this rain, the waters have risen enough for us to cast them off. 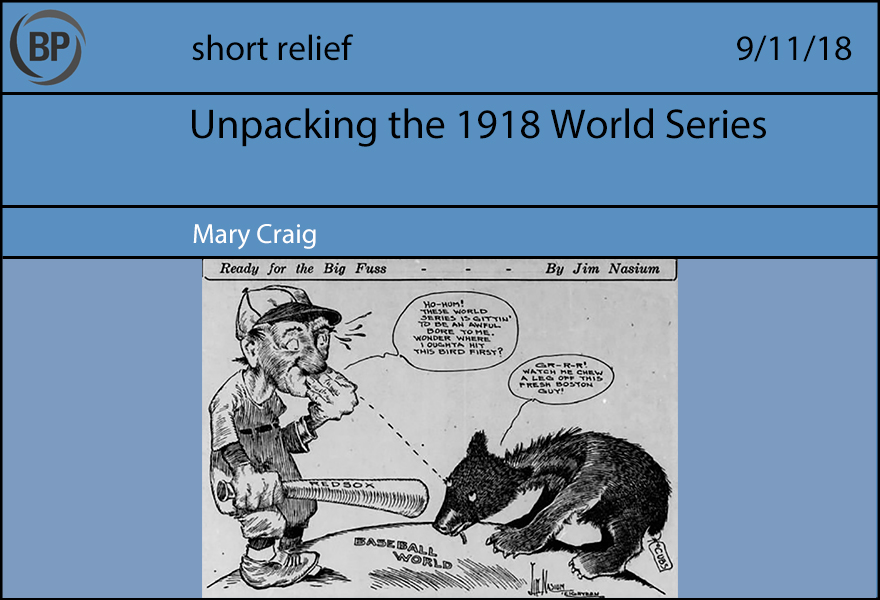 Today marks the 100th anniversary of the conclusion of the 1918 World Series, a 4-2 game victory by the Red Sox over the Cubs. As a Red Sox fan, the series has always held significance for me despite it having occurred long before I entered the world. Prior to 2004, it was recalled by Red Sox fans as a point of pride as well as an indictment on the ensuing eight championship-free decades. What has been lost through the decades of lore is just how bizarre that World Series was, start to finish.

Due to the strains of World War I, league and team owners anticipated a steep drop in game attendance, which they tried to offset by appealing to fans’ sense of patriotism. Each game featured crowds of soldiers who had returned from the war, and the bulk of the proceeds for the first four games were to be donated to the Red Cross. This strategy did little to increase attendance, instead only angering players of both teams whose World Series shares would be greatly diminished by the donations.

Unhappy with playing virtually for free, the players for both teams went on strike an hour before Game 5’s 2:30 start time, demanding from the leagues and their teams’ owners a more equitable share of the revenue. However, when faced with the prospect of losing the entirety of their shares and having to fund their own travels home for the off-season, the players ended the strike, beginning the game at 3pm after the hour-and-a-half strike.

Nestled amid these revenue concerns were a couple of remarkable on-field achievements. All season, both teams relied on excellent pitching and defense to power them to the World Series, and these six games proved no different. The Red Sox combined to hit a meager .186 across the six games, recording the lowest average ever for a winning team. Moreover, the teams together made only five fielding errors, one for the Red Sox and four for the Cubs. To give you a quick sense of how remarkable this feat was at its stage in baseball history: In the 1917 World Series, the White Sox and Giants combined for 23 errors, and the Reds and White Sox combined for 24 in 1919. Not until the 1937 Yankees did a team again record fewer than 3 errors.

World Series attendance ended as the lowest it had been since 1909. The players received less than one-third the share of previous war-era winners and the lowest amount since the World Series’s inception. The militaristic grasp on professional baseball was firmly established. The events of the 1918 World Series proved significant not only for its era but for generations of baseball fans, Red Sox and otherwise. 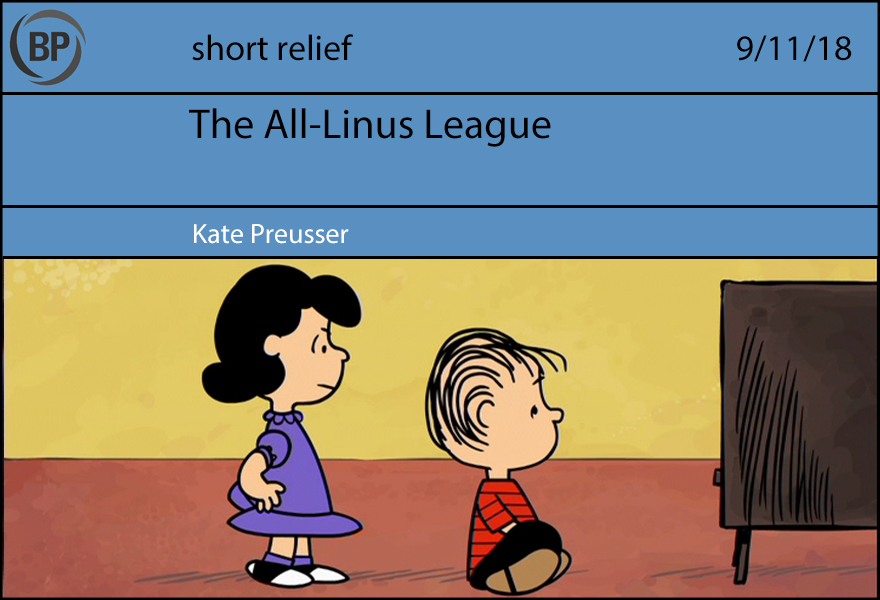 There’s a Peanuts cartoon where Lucy presses down on Linus’s head every time she passes him. After this happens several times, Linus asks her what she’s doing, and she replies that she’s ensuring he can’t grow any taller than her. This year, a number of MLB clubs are similarly pressing their thumbs down on the foreheads of their top prospects to keep them in the minors, safely removed from the service time clock’s tick.

MLB organizations gaming the service time system is nothing new because, as my friend John tells me, “the rich didn’t get that way by giving it away.” What is extraordinary this year is the density in both the amount and the quality of players being held under the thumb of clubs. Even with graduations due to clubs who are willing to take the reckless step of promoting their top prospects — thanks, Nationals, Padres, and Braves — the talent being caged in the minors is at near-historic levels. If they collectively fielded a club, it’d look like this: the All-Linus League.

The Mets are repeat offenders on this list, notoriously slow at promoting top prospects until it becomes clear another season has been Flushing-ed down the drain. Peter Alonso perhaps isn’t as impressive as some of the other names on this list, but he was the first player at any level of professional baseball to reach 100 RBI this season, with 21 homers and a gaudy .321 ISO in the hitter-friendly Pacific Coast League. The Mets justify keeping Alonso in the minors to work on his “defense,” which would be a reasonable line of argument for any team that didn’t give Jose Reyes 200 plate appearances this season.

Nicky Lopez is Luis Urias-lite and almost certainly a better player than any Kansas City Royal except the one who occupies one of the positions he plays. Even at short, Lopez would clearly be an immediate upgrade over Alcides Escobar, who is currently playing a brand of baseball akin to cutting a jalapeño and then rubbing one’s eyes.

One of the city of Cincinnati’s most clearly defining traits is that no one got mad that, on The Good Place, bad-girl Eleanor demands to be sent to the city as the definition of “A Medium Place.” Even Cincinnati residents recognize that’s overselling the city some. The Reds aren’t egregious offenders on this list, as Senzel has had some injury concerns and they can always trot out Joey Votto, the Li’l Sebastian of Cincinnati.

The Mets did call up Guillorme this season, but sent him back to the minors “to get regular playing time,” while offering regular playing time to… Jack Reinheimer. Because any time you have a chance to play a 26-year-old utility infielder with a name like a background character on an ’80s cop show, you take that chance.

OF: This is by far the deepest position in the Linus League, and the names here are laughably good: Vladimir Guerrero Jr., Eloy Jimenez, Byron Buxton, Victor Robles, Clint Frazier. Some of these players have been slowed by injuries that their parent clubs were all too willing to use as justification to keep these talents stowed in the minors for extra time, but the combination of just these players would probably bank more wins than the Orioles (“But what about the pitching?” WHAT ABOUT IT.)

You need to be logged in to comment. Login or Subscribe
Shaun P.
Wait, what? Clint Frazier?! Dude has been suffering concussion after effects for months now! The Yankees have been desperate for outfielders since Judge got hurt and Billy McKinney was traded, and they would have called him up if he could play. I don’t understand how he ends up on a service time manipulation list.
Reply to Shaun