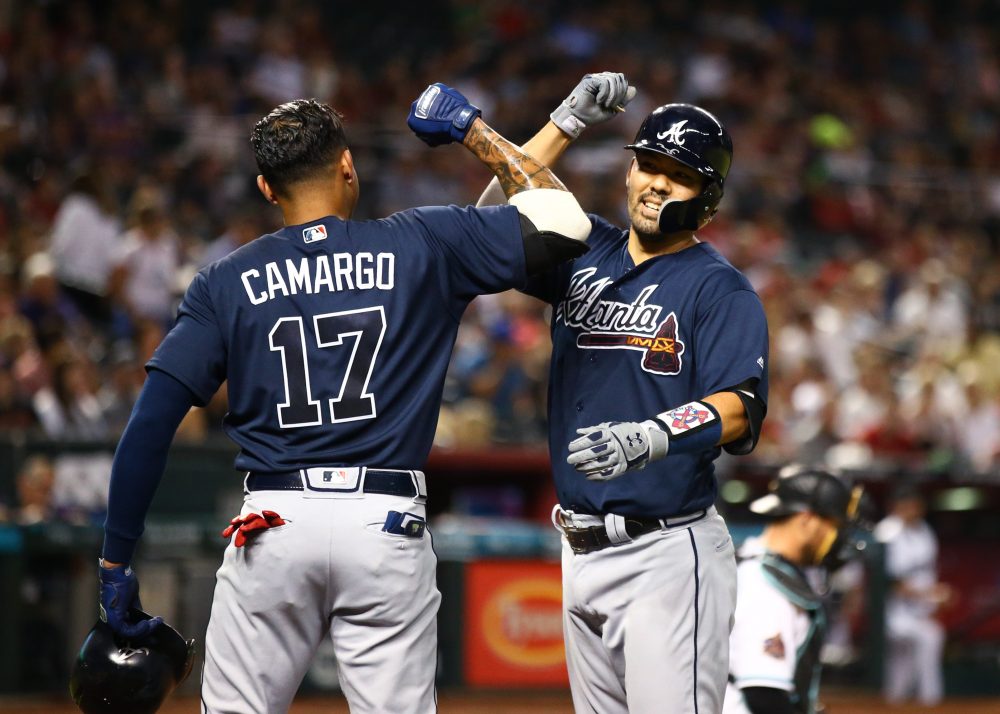 The Braves and Diamondbacks entered their series with a real sense of urgency. Arizona lost a recent 1 ½ game lead in the wild NL West, with ill-timed bad stretch having them fall 1 ½ games back, and into third place. Meanwhile, the Braves were still on top of the NL East but definitely were licking their wounds after blowing a six-run eighth-inning lead, plus a two-run ninth-inning lead, to the Red Sox. One of these teams had to break out of their funk!

The Braves at first appeared to be the team to do it, and do it convincingly. Atlanta scored twice in the first inning and added two more runs in the top of the fourth on this bomb by Kurt Suzuki off Zack Greinke.

The Braves got fine work from Anibal Sanchez over five innings, but he probably wants to have back the fourth, when the Diamondbacks’ Nick Ahmed pounced by hitting a bases-clearing double.

Down 4 no more. Ahmed brings the @Dbacks within 1 with a bases-clearing double. pic.twitter.com/s9wCgFYyYa

Johan Camargo replied with a home run, and Braves went into the eighth with a two-run lead when Paul Goldschmidt came to life. He led off with double, and Ketel Marte brought him home to bring Arizona within one run. It was getting late, but we’d hear from Goldschmidt again. The Braves scored another run to push the lead back to two, and the Diamondbacks were on their last legs when Goldy returned to the plate in the ninth. A.J. Pollock hit a sacrifice fly to cut the deficit to one, and Goldschmidt cut the deficit down to zero in emphatic fashion.

Arizona was in euphoria and the Braves were experiencing a bit of deja vu after their bullpen had coughed up yet another late lead. In the end, it was Arizona’s bullpen that ended up letting down more. Yoshihisa Hirano inherited a bases-loaded jam from Brad Boxberger and promptly tossed a pitch to the backstop that allowed Dansby Swanson to score the lead run.

The Braves breathed a sigh of relief, but the Diamondbacks continue to slide, and a sense of urgency continues to rise in the desert.

A big fly from Mark Reynolds put the Nats ahead against the Cubs.

After the Cubs manufactured a run in the eighth inning to tie it up and the game went to extras, David Bote again pulled off some late-game heroics.

David Bote has been known to do these things. #EverybodyIn pic.twitter.com/Ct6e1mGusc

Rowdy Tellez’s first couple of days in the big leagues have been especially memorable. He continued mashing after smacking a double in his first major league at-bat Wednesday night, finishing with three doubles in four at-bats overall. I can’t imagine many predicted Rowdy Tellez to be the first player in the live-ball era to begin his career with three extra-base hits, but for the zero of you who did, congratulations!

Even though Tellez had another exciting night in a Blue Jays uniform, the true star of the evening was Francisco Lindor. Lindor was locked in, going deep in his first two at-bats, and giving Cleveland the lead for good with a two-run single in the fifth.

Lindor gives the @Indians the lead with a 2-run broken bat single. Along with his two home runs, he has 4 RBI on the night. #RallyTogether pic.twitter.com/KMmRggqMyt

If you don’t enjoy watching this guy play baseball then I really don’t know how else to sell the game to you.

Yes, we’re going to talk Padres and Reds. We’re talking about it because Francisco Mejia has arrived to the big leagues and determined it isn’t really all that difficult. After all, he hit two dingers in his first career start at this level—so how hard could it really be?

Francisco Mejía’s Padres career is off to a red-hot start 💥💥 pic.twitter.com/I2otKUT4FY

The Padres gave us the best defense of the night as well! Look at the Friars showing off! If you can make a diving catch with two outs to strand the bases loaded, you have earned this prestigious award. Hats off to you, Hunter Renfroe.

We give @Hunter_Renfroe a 10/10 on the catch. Bonus points for the gymnastics at the end 🤸‍♂️ pic.twitter.com/iJh62hqbrF

You’ll be relieved that everything gets back to normal with a full slate. The biggest game is a playoff preview at Fenway, where the Red Sox host the Astros. The pitching matchup in the opener is a dandy: Gerrit Cole vs. David Price, who is returning from an injury.

Speaking of intriguing pitching matchups, Clayton Kershaw toes the rubber for the Dodgers at Coors Field. Considering how wild the race has been in the NL West, it’s always worth keeping an eye on what’s going on out there, and this game should be a treat.