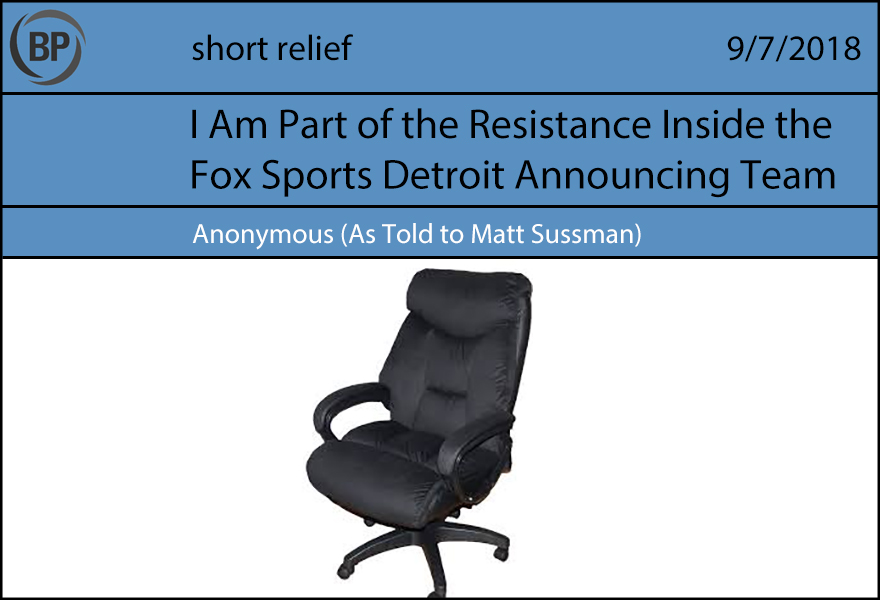 Short Relief is taking the probably necessary measure of keeping a source anonymous as it details its involvement in the longstanding cold war between announcer Mario Impemba and analyst Rod Allen, which boiled over in a physical altercation. The source wished to be identified as an office chair with close ties to the announcing crew. We feel this anonymity will give us a harrowing glimpse into the dynamics between these two professionals, and it’s also entirely possible the chair doesn’t have a name to begin with.

Every culture has their own seat check rules and nobody gets it quite right, but their heart is in the right place. On the whole, never does a chair belong to one person, nor is a person obligated to give that chair to someone else. It’s complicated. These two dudes just didn’t understand it. It was never about the chair. It was about the share. It’s also about not tooting while in me, come on. We don’t ask for much.

What I do know is that these two guys were a broadcast duo for 15 years covering the same organization, from its 119-loss season to the Armando Galarraga near-perfect game to that one time Ryan Raburn made a fine play. It’s been a whirlwind of a ride. And yes, it’s fair to say that one can get too comfortable in one place, because that’s what chairs are for. But it’s also important to, on occasion, get up, stretch your legs, and either work through differences or recognize there is no tenable compromise and go your separate ways.

They had a good run. A nice run. A replacement-level run. The chair is emblematic of more than a place to not have to stand; it’s a perch from which one gets to observe baseball and tell the story of it, to those who are also sitting far away and also observing it. Sit there as long as you can, until maybe you realize somewhere that it’s someone else’s turn to sit there and tell their story.

Which is, of course, why I broke a cardinal rule of chair doctrine and moved myself into the other guy’s spot. 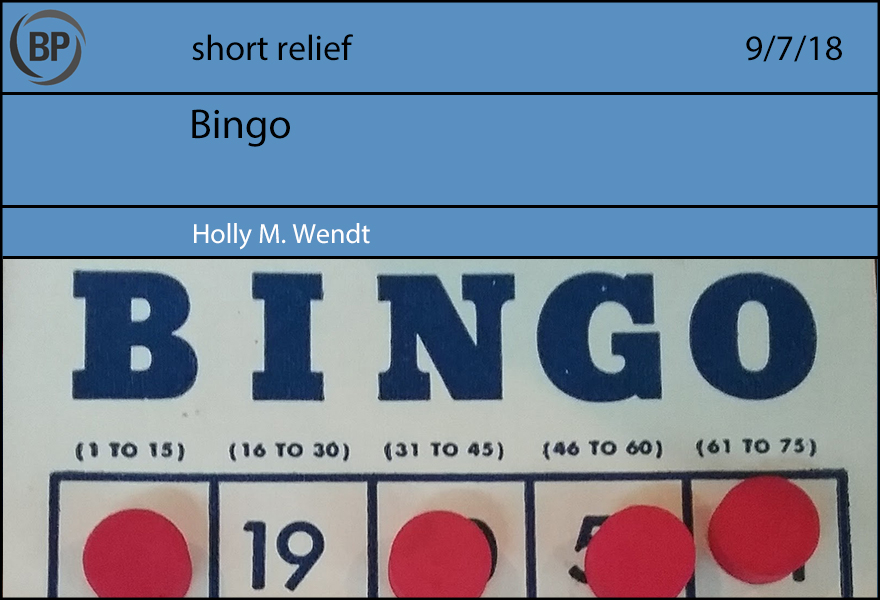 Last month, the overflown creek was up to the roof of the picnic pavilion. The cornfield beyond it, past the trees, is mud-raked, some of the crop flattened and long-drowned, all of it bordered by new stones the creek tumbled down or washed clean. Someone else’s roofing tin rests like wadded-up paper at the base of a tree. But the tables didn’t get washed away completely during this flood, and the grove’s caretakers have tidied up, so the family reunion continues as scheduled.

Though there are only fourteen people in attendance this year, there’s food for thirty and dessert for fifty, as there always is, a product of habit and tradition and expressing care culinarily. And though there are so few, the annual customs must be observed: after lunch, there’s bingo.

The table full of prizes—small, practical things, like Tupperware and flashlights and packs of pens, or edible treats, like bags of Hershey’s Kisses and boxes of crackers, each one wrapped up for the additional small pleasure of surprise—somehow overflows. One of the great-aunts spins the numbered wooden balls in the metal cage that dispenses one of them. She calls out loudly, correctly, Under the B: 12. We all play three cards at a time, and we mutter when four numbers get called but not a single one of ours. I can’t help the little rising flutter when bingo is but one number away, even though I know I’m not one of those people with the kind of luck that helps in these situations. Some people seem to have it, like Great-Aunt E, who, with just three cards, seems to win twice as often as everyone else.

It’s the chanciness of the game that I welcomed, though, one week into a new semester on the heels of a chaotic, though invigorating, summer. Beyond my basic attention, bingo requires nothing of me—no strategy, no argumentation—and there is nothing I can do to impact the order of the numbers called. One can add more cards to increase the number of chances, but affecting the caller’s outcomes—the ball rattling into its cup—remains entirely out of reach. Getting close doesn’t matter. O-72 means nothing when what you need is O-71.

Another of the great-aunts asks, “Are you still watching those Phillies?”

When the team is being disappointing, the pronoun moves farther away: those Phillies are the ones who drop games in the eighth and ninth inning, the team that suggests it’s safe to go to bed in the fifth inning if they’re down by a few. Maybe if this reunion had happened in mid-July, the question might have been, “How about these Phillies?”

Indeed I am, I say. As often as possible. I put a marker over a number that does not result in bingo. After two or three more calls, though, maybe it will. Though the night’s game won’t start until 7:05 p.m., I might even be watching them right now. 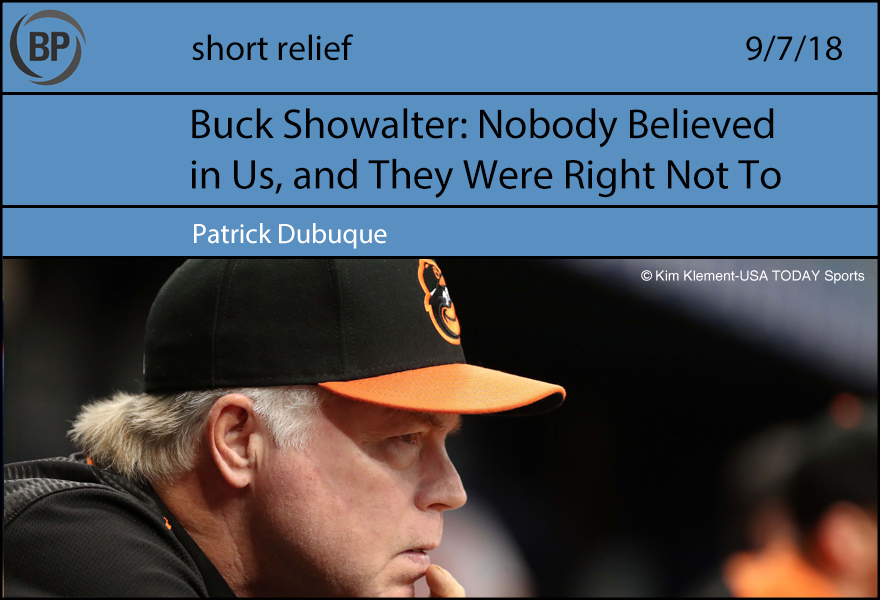 “I hear some people saying that we don’t have a [expletive] chance, that this isn’t our year,” Showalter was quoted as saying, unprompted. “I hear them doubting that we have what it takes to win the [expletive] World Series. And they’re 100 percent [expletive] correct. We’ve been mathematically eliminated from playoff contention. We haven’t won as many games as we are back in the division. What I’m [expletive] saying is, their arguments are valid.”

Asked about preseason projections: “The [expletive] stats. The stats are always down on us. Underrate our bullpen What did they project? 93 losses? Man, did they turn out to be wrong. Hell, we’ve got 99 already. I don’t know how what Nate Silver’s even thinking these days, but he must be embarrassed. Somebody’s gotta lose their [expletive] jobs over something like this.”

Showalter claimed that he had a feeling things might be problematic in the spring. “[Chris] Tillman showed up saying he’d read his comment in the Baseball America Annual, or some [expletive]. Went around telling everyone he knew he was still good, that it was gonna inspire him. Well, then he got roughed up and started reading Zen and the Art of Motorcycle Maintenance in the second inning, and before you know it he said that was motivating him too. Started calling himself “Phaedrus” around the clubhouse. Scared some of the rookies. Boney [Jimmy Yacabonis] still shudders whenever anyone brings up [expletive] metaphysics.

Asked if he had any regrets about how the season went down: “Yeah, I guess one. Seth [Smith]’s been on the roster all year, and I keep forgetting to tell him he can play. He’s too [expletive] nice about it. Stretches and everything. He’s been real good for the morale when guys get down every once in a while, though.”

“Look, I don’t want to be hard on my players. We all go out there and play hard every [expletive] day, and things just went wrong. You know how it [expletive] is. Also, we didn’t have a lot of talent, and Crush got that case of gout we never followed up on, and some of that talent got old. I got old! I haven’t filled out a lineup card since July. I forgot one time and nobody said anything. Hell, no one’s said anything since. The starters just go hit when they want to. They [the opponents] don’t even [expletive] care. It’s just too bad that the [expletive] upstairs couldn’t see all this coming, you know?”