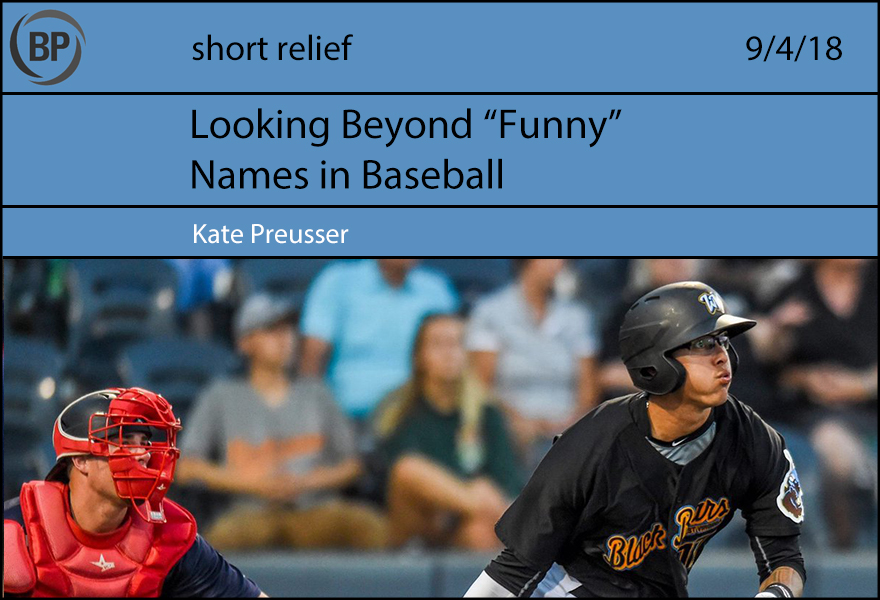 It’s a common thing for those of us who follow the minor leagues or college baseball to sigh over particularly deliciously named players; I myself have written a “D-II baseball player or YA hero?” quiz for these very electronic pages. It’s all in good fun, but it’s also a reminder that the landscape of names in America is changing. The top tier might currently be full of Alexes and Mikes and Aarons, but there is a new wave on the way.

A fellow tweeted me after the 2018 draft to tell me that Mariners prospect Keegan McGovern would never be anything, because “no Keegans rake,” and I had to tell him that he needs to brace for impact in a few years, when the Keegans and Blazes and Tristans are the new Alexes and Mikes and Aarons. (Also, of note: Keegan McGovern has 15 dingers at A-ball this season, so perhaps Keegans do rake.) For me, I’m out of the name game after discovering Arkansas’ RHP Zebulon Vermillion, my God particle, my El Dorado, my recipe for turning lead into gold.

Baseball is a game of constant, relentless winnowing by level, so it’s rare to see one’s favorite-named prospect make it anywhere in the game. I’ve been tracking Pirates outfielder Bligh Madris since he was at D-II Colorado Mesa; after an encouraging stint in short-season ball, he’s struggled since being promoted aggressively to High-A Bradenton, losing a little of his trademark strong plate discipline. I find myself concerned by this news, more concerned than maybe one should be about an A-ball player in an organization I don’t follow, because in learning about Bligh Madris, I’ve learned a little about him personally: his father, Style Madris (!), moved to the US from the island of Peleliu in the early 80s. Style’s mother Sadako had two brothers, Kengich Madris and Singeru Techur, who were star baseball players on Palau.

The Japanese brought baseball to Palau during their occupation of the island over the early twentieth century and the sport’s popularity grew to a fever pitch over the 1960s; if you’re interested in reading more about it I recommend this excellent, exhaustive article by David Walter. For all the country’s rich baseball tradition, however, no baseball player from Palau has ever played in MLB. Bligh Madris wouldn’t be the first, as he was born in Colorado, but he would represent a part of baseball that hasn’t had a light shined on it in decades. There’s always so much more to a name.

Huge shout out to my dad, he’s retiring after 30 years of working at the Fremont. This man would work for 10 hours a day on his feet and then come home and find time to wrestle with me as a kid and teach me the game I love. I love you Dad thanks for being my Hero. pic.twitter.com/a6ktU2jtWi 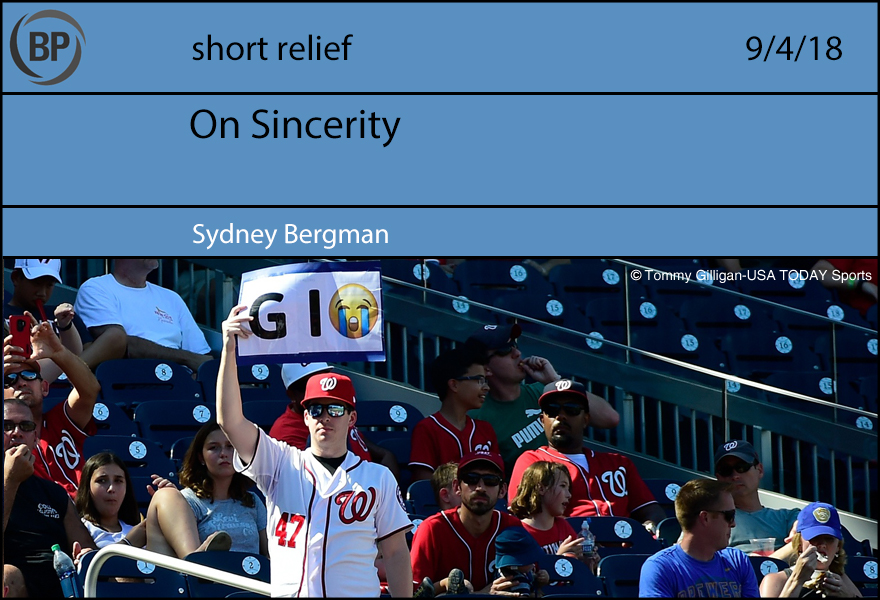 Gio Gonzalez yells into his glove a lot, usually in the second inning, when things start to go haywire. Maybe there’s two guys on and no outs; maybe he’s at 40 pitches on his fifth batter. Maybe he’s just having a disagreement with the catcher, the umpire, the weather, gravity — but mostly with himself.

He talks a lot too, chatty with the media, the fans, the rosin bag, the ball. Pitching is an inherent conversation between the pitcher and catcher, even with mound visits limited; between the battery and the dugout; between the team and the fans.

With Gio, if he’s dominant or disastrous, the conversation is always there. And it’s something relatable: Who hasn’t had those days where everything just kind of goes to hell? Or where everything goes magically OK, where success doesn’t elude you, if only for an instant — something you can’t even enjoy because you’re worried about it dissolving into something worse? Maybe that just reflects my own relationship to anxiety, that crawling feeling that success is an illusion and failure inevitable, one that feeds off the twin reservoirs of imposter syndrome and catastrophism. I don’t know what’s in Gio’s head — don’t know if these are things he feels too, or if that’s just my own projection.

Because there are the players you love for their dominance, for their skill that’s so far to the right of the normal curve of human performance. I watched Aaron Judge hit homer after homer during the 2017 Home Run Derby from the floor of my living room, laughing at the absurdity of what these large baseball men can do.

Then there are players you love because you look at what they’re doing and it’s relatable. Not in the “I’m capable of doing that,” way but “they feel a way I have also felt” way. There’s sincerity in Gio’s kind of pitching, a sincerity that comes from watching someone so openly struggle, and despite everything, sometimes succeed. A sincerity shown by the outpouring of fan stories about a guy who never had a mean word for anyone but himself.

“You can’t do nothing about it but continue to smile and chug along,” he once said of a 2012 spring training loss. Nothing I can do about his being traded, either, except smile about it and keep chugging along. 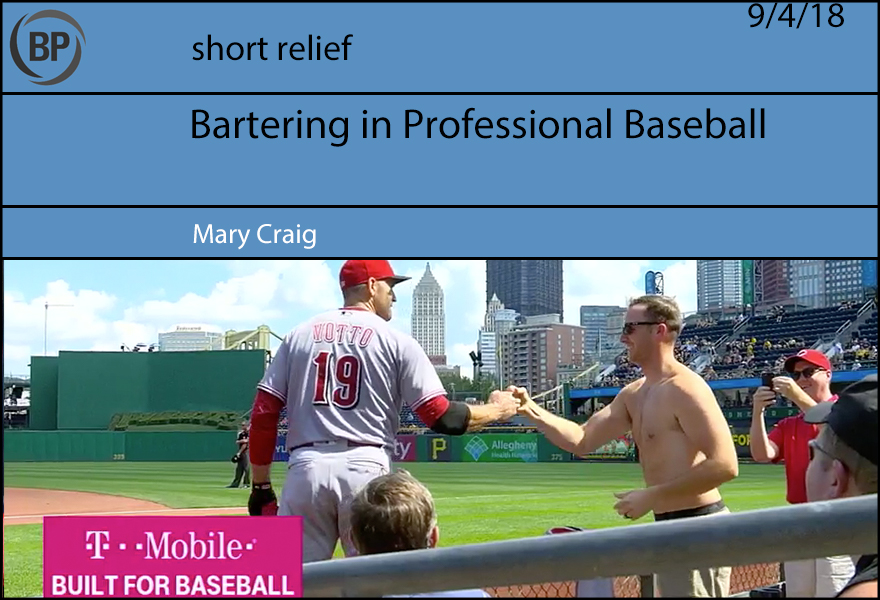 Prior to Monday’s Reds-Pirates game, a fan wearing a “Votto for President” caught the attention of said player. After several minutes of contemplation, Votto decided he needed to acquire the shirt. There was only one problem: he did not have any cash on him with which to purchase the shirt. Luckily Votto, a student of history, recollected another, antiquated method of acquiring goods: the barter system. Votto received the coveted t-shirt and the fan received an autographed jersey in a true display of Lockean equality.

The success of the exchange prompts one to wonder what other exchange of goods and services could happen between players and fans in want of memorabilia.

1. Legal services in exchange for a signed bat

Legal matters are full of minefields even the best agent can’t faultlessly navigate; if additional help were to come along for the small price of a signed bat, a player would be foolish to turn it away.

This thing is doubtlessly delicious, as would be most any two pound ice cream concoction. But a single individual, even a professional athlete, ordering this thing seems completely ridiculous. However, if a well-intentioned fan was to supply it in return for an autographed pair of batting gloves, turning down such an offer would seem wrong, even to one’s manager.

3. A professional portrait in exchange for a signed baseball

Official player photographs typically range from underwhelming to horrifying. A ‘free’ portrait couldn’t be any worse.

4. An interior design consultation in exchange for a batting helmet

Major league baseball players constantly change their housing situations and are therefore forced to search out interior designers to assist in decorating their new living spaces. A batting helmet is a small price to pay for the convenience of not spending hours searching for the Chip and Joanna of New York.

5. A Social Media training session in exchange for home plate

You need to be logged in to comment. Login or Subscribe
Alexander Bensky
As to names, the Tigers have a minor leaguer named Brock Deatherage. His name is pronounced "deather-er-adge," but if he makes it I'm going to pronounce it "Death Rage."
Reply to Alexander
drdaley
The great General McArthur, on the Duluth Huskies of the Northwoods League. They lost to the Fond du Lac Dock Spiders in the championship of the 20 team, 2 divisions league. Couldn't quite lead his team to a come from behind victory despite being hit TWICE in the same AB in the 9th inning as the ump said he was leaning into the pitch. CRAZY
Reply to drdaley