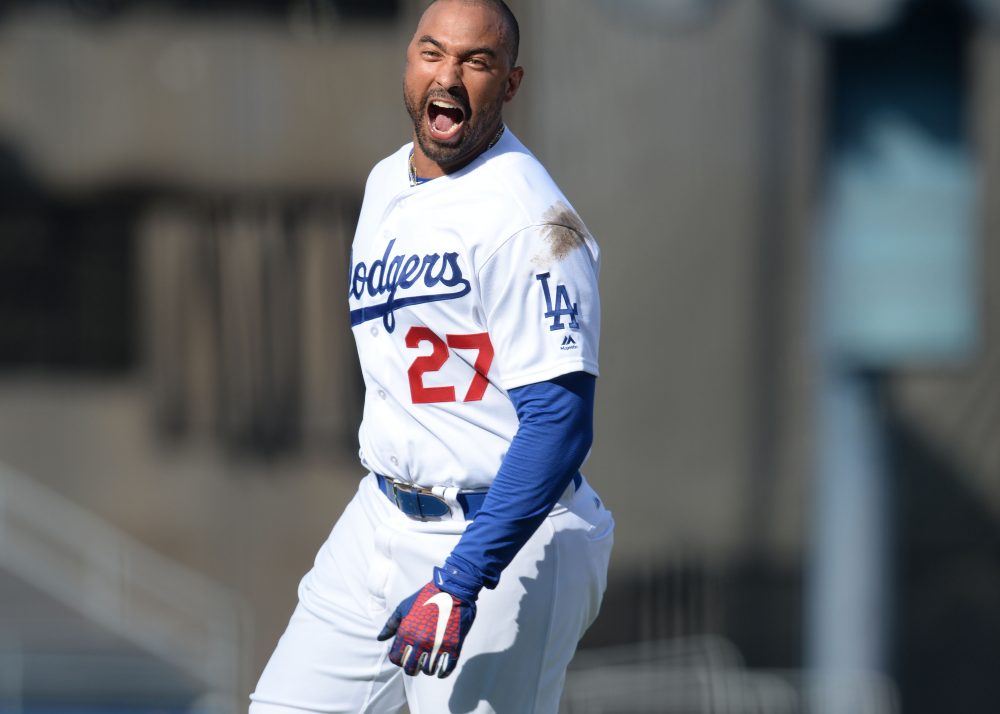 Take a gander at this:

I don’t know about you, but the sight of this excites me greatly. I want there to be total chaos in the NL West all of the way down to the last day of the regular season. I want a Game 163. I want a three-way tie. Please, baseball? Do this one little thing for me. I don’t root for any of those teams, but do will admit to having an affection for the Dodgers even though I was taught as a kid to dislike them because of the Yankees/Dodgers’ World Series rivalry of the late ‘70s/early ‘80s.

Matt Kemp had himself a weekend. On Saturday night with the Dodgers down 2-0 to the Diamondbacks in the eighth inning, Kemp launched a three-run, go-ahead run into the left centerfield seats.

On Sunday afternoon, he hit a walk-off double to push the Dodgers into first place alone atop the NL West.

Max Muncy got the scoring started by belting his 31st home run in the fifth inning Sunday.

Friday night was your run-of-the-mill contest in which the Diamondbacks opened up a 2-0 lead in the top of the first and didn’t score again while the Dodgers chipped away and pulled ahead in the 8th inning on Justin Turner’s 11th home run. It was the first pitch Zack Greinke threw in the inning.

The Rockies and Padres also split a four-game series at Petco, with Colorado taking the last two.

The race out West in the American League is still pretty close; not like the one in the National League, but the A’s are still hanging in there with the Astros. The A’s and Mariners split their four-game series at the Coliseum, with Oakland taking the finale.

On Saturday, Khris Davis hit his 40th home run of the season:

But the Mariners won thanks to an eight-run outburst in innings 2-5. The A’s tried to stage a comeback in the eighth, scoring four runs, but they came up short.

On Sunday, Felix Hernandez took the loss for Mariners. He five innings and gave up four runs on four hits, including a home run by Stephen Piscotty who also took reliever Justin Grimm deep in the eighth.

Down in Houston, the Astros and Angels split their series. On Sunday, the big news was the return of Shohei Ohtani to the starting rotation. Sunday’s with Shohei is back! Though it didn’t last long this time.

Ohtani was on a pitch count and he reached it by the third inning. George Springer took Ohtani deep in the third with one out.

Ohtani was removed after his 49th pitch. He gave up two runs on two hits, he walked two and struck out two.

Gerrit Cole lasted until there was an out in the sixth inning. He gave up two runs on six hits, he walked three and struck nine. He picked up his 13th win as Houston went on to win 4-2.

Oh, and Alex Bregman who was featured on ESPN’s Sunday Night Baseball and who also made a friendly $50 wager with Alex Rodriguez on the LSU/Miami football game went deep in the seventh off Junichi Tazawa.

Acuña tied Marquis Grissom for most leadoff home runs by a Brave in one season. Grissom also hit seven back in 1997. As for his mark among rookies, he’s now tied with Nomar Garciaparra and Hanley Ramirez, who also hit seven in 1997 and 2006 respectively. The all-time record for rookies is by Chris Young, who hit nine in 2007.

The Braves have opened up a four-game lead on the Phillies in the NL East. They play Boston next.

The NL West isn’t the only race that’s bunched up; the NL Wild Card race also is filled with a number of teams who are close in the standings. The Brewers lead by a half-game for the first Wild Card ahead of the Cardinals, who are only 1 ½ games ahead of the Rockies for the second Wild Card slot.

I’d like chaos to rain down upon the NL Wild Card race as well. Please? Thanks.

The Brewers pulled into the lead thanks to a Christian Yelich grand slam.

It was his 27th home run of the season.

Have you ever seen two home runs in one at-bat? It happened Sunday at Chicago’s Guaranteed Rate Field. Daniel Palka homered twice in one at-bat—but only one counted. He hit a ball that was thought to be a home run, with fireworks going off, and by the time he reached third base on his trot, umpires decided that it wasn’t a fair ball.

So Palka had to get back in the box and finish the at-bat. He then hit a 3-2 offering from William Cuevas that was clearly fair and gone for his 20th of the season.

The White Sox beat the Red Sox 8-0 behind a strong six innings outing for James Shields, who held Boston to four hits, striking out six to earn his sixth victory.

Yankees manager Aaron Boone had an issue with the game that umpire Nic Lentz was calling Friday night and, after a called strike against Gleyber Torres in the bottom of the fifth inning, Boone was ejected for arguing balls and strikes. But the disagreement obviously didn’t end there. Boone came out of the dugout and my favorite moment from this weekend occurred:

When he crouched down just like his dad, Bob Boone, and showed Lentz what’s a ball and what’s a strike, I nearly lost it. Yankees fans have been waiting for Boone to show some life and following his theatrics, the Yankees staged a comeback and won the game.

I couldn’t believe this when I saw it on the ESPN ticker Sunday night: Noah Syndergaard threw his first complete game. Doesn’t that sound weird? For whatever reason, I thought he had already done that. I guess that shows how much I pay attention to the Mets. Anyway, Syndergaard gave up one run on two hits, struck out 11 and walked one in a 4-1 Mets win over the Giants at AT&T Park.

The Mets won two of three against the Giants. They play the Dodgers next. Yeah, good luck with that.

The waiver trade deadline passed this weekend and while there was no exciting last second trade like a season ago when Justin Verlander went to the Astros, a few contenders made some moves.

The Yankees traded for Andrew McCutchen to play the outfield while Aaron Judge is still out with a wrist injury. He’s not the McCutchen of old but he’s a better outfielder than Neil Walker.

Cleveland traded for Josh Donaldson. This move is a bit risky as Donaldson has been out since May 28, and he wasn’t playing great to begin, with but if he comes back healthy, he could be a big boost to a team trying to make it out of the first round and possibly break a 70-year championship drought.

The Brewers also made some moves. They traded for Curtis Granderson and, and for Gio Gonzalez at the last moment. I’m not sure about that move because Gonzalez has not been good this season and, for a team that kinda-sorta needed some pitching, going for Gio is a bit questionable. He has a 4.57 ERA (4.50 DRA) and, since the beginning of June, he’s pitching to a 6.53 ERA and is 1-9 in 16 starts.

Defensive Play of the Weekend
McCutchen made a nice first impression in the field on Sunday, taking a hit away from Niko Goodrum.

As most of the country is off for Labor Day, baseball won’t rest. There’s a full docket of games.

Action starts at 1 p.m. at Atlanta as the Braves host the Red Sox. There are three more games that start in the 1 o’clock hour, three that start in the 2 o’clock hour, one 3:10 start as the Giants visit the Rockies. At 4, the A’s host the Yankees in a series that could have Wild Card implications. Ten minutes later, Cleveland and the Royals begin in Progressive Field. Tampa and Toronto start at 7:07 p.m. The Angels continue their tour of Texas when they face off against the Rangers at Arlington starting 8:05 p.m. Five minutes later the Mets and Dodgers, and the Padres and Diamondbacks, start their respective games. And last but not least, an hour later at 9:10 p.m. the Mariners host the Orioles at Safeco Field.

(All times are Eastern.)