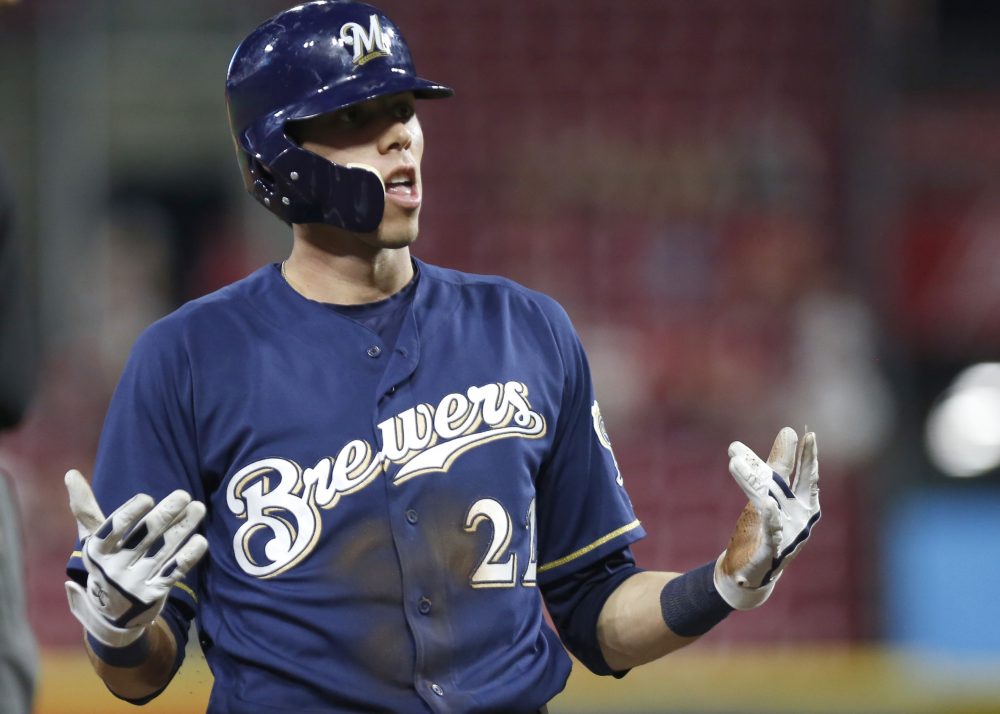 The Brewers and Reds played the best game of the 2018 season so far, linking up for 25 runs, 36 hits and 13 pitchers used over 10 innings at Great American Ball Park. One of the 11 relievers parading in from the bullpen, Michael Lorenzen, smashed his fourth home run. And Christian Yelich delivered one of the great all-time hitting lines, going 6 for 6 with the cycle, in a 13-12 Brewers win. Check out the line score:

Mike Moustakas and Billy Hamilton had four hits apiece (but no steals for Billy), and Brewers reliever Josh Hader allowed four runs for his worst outing of the season. Milwaukee lost the lead three times and Cincy squandered a four-run lead in the seventh. The Reds rallied again in the 10th before Jeremy Jeffress finally shut the door.

Yelich hit his 26th homer to give the Brewers a one-run lead in the fifth, but Eugenio Suarez hit a two-run shot of his own, his 30th, to put the Reds ahead 7-5 against Hader in the bottom half.

The Brewers cut into the lead against Lorenzen in the sixth, but the reliever got an opportunity to bat in the bottom half. After a questionable call by the home-plate umpire on what appeared to be a third strike that was bunted foul, Lorenzen showed why he’s one of the few relief pitchers who gets the opportunity to hit for himself:

Milwaukee was chasing four runs in the seventh when Moustakas, Jonathan Schoop, Lorenzo Cain and Yelich sparked another rally to tie the score at 10-all.

Moustakas broke the tie with a leadoff home run in the eighth, but in the bottom half, Brewers reliever Joakim Soria uncorked a wild pitch with runners on second and third. Billy Hamilton dashed for home and slid in ahead of the flip from Soria. The call on the field was out, as the umpire judged that Hamilton had missed home plate, but replay vindicated Cincinnati; Hamilton sneaked his hand between the cleats of Milwaukee catcher Erik Kratz and touched the corner of the plate. Runner safe. Tie game. Eleven-eleven.

Jesus Aguilar matched Suarez with his 30th homer, a towering fly to center field, in the 10th. The Brewers added another run to make it 13-11, and they needed the insurance, with Cincy’s Brandon Dixon leading off the bottom of the tenth with a homer. But this game was all out of magic comebacks, with Jeffress setting down Jose Peraza, Scooter Gennett and Suarez to end it.

The Boston Red Sox put up 11 runs on the Miami Marlins in the seventh inning, which featured a revolving door of four different Marlins pitchers, 12 total hits, and five different Red Sox collecting multiple hits. It turned a potentially embarrassing two-run deficit into a 14-5 blowout:

Walk-off alert in Houston! The Astros took two of three from the A’s, stretching their AL West lead to 2 ½ games. The victory in Game 3 came down to the last swing, with Tyler White providing the fireworks.

Walk-off alert in the Windy City! The Cubs won the suspended game from Tuesday in their final at-bat, and didn’t even need David “I’m On A” Bote to do it. Ben Zobrist lined a single up the middle and Javier Baez scored easily from third to finish up the suspended game, stretching their winning streak to seven, but the streak would be doomed with a loss later in the day.

“You don’t hear much about guys who take their shot and miss, but I’ll tell you what happens to them. They end up humping crappy jobs on graveyard shifts, trying to figure out how they came up short.”

Yasiel Puig‘s not likely to end up humping any crappy graveyard shift jobs anytime soon. Hell, even a “job” playing for an Independent League team would be a stunning development at this point in his career. And yet, I can’t watch him attempt to steal home without thinking of that quote. Puig is the type of guy who always shoots his shot—for better or worse. This time, it was worse. Alex Claudio and Isiah Kiner-Falefa were able to throw up a roadblock just in time, and Puig’s walk back to the dugout was made extra-long:

Defensive Play of the Night (Plus Bonus Karmic Payback!)

Yankees slugger Neil Walker launched a line drive at the right-field fence in the second inning. White Sox right fielder Avisail Garcia was playing deep, had plenty of time at the wall, and made the full-extension grab to rob a home run:

Three innings later, Garcia paid the price for his insolence. He mashed what looked like a sure double to deep center, but Aaron Hicks got on his horse and ran it down, finishing with a full-extension dive to match Garcia’s leaping grab:

The White Sox, right now playing by far their best ball of the season (not a high bar but…) took two of three games from the heavily favored Yankees.

After their high-scoring, extra-inning affair, the Brewers and Reds are slated for (eep!) a 12:35 p.m. ET first pitch. Brewers primary catcher Manny Pina left the game Wednesday after being hit by a pitch; if he’s seriously hurt it could force a roster move by Milwaukee pretty early in the day. Regardless, it’s slated to be Wade Miley vs. Cody Reed on the mound.

J.A. Happ of the Yankees and Rick Porcello of the Red Sox will each be going for their 16th win—Happ against the Tigers and Francisco Liriano at home, and Porcello at Chicago to face the White Sox and a resurgent Lucas Giolito.

The National League matchup between the Cubs and Braves has the strongest playoff implications of the slate, with both teams in the thick of tight divisional races. Cubs lefty Mike Montgomery will square off with Atlanta’s surprising 2018 ace, Mike Foltynewicz, at SunTrust Park. First pitch is scheduled for 7:35 ET.

The Diamondbacks and Dodgers are sandwiched around the Rockies in the NL West standings, but the three teams are separated by just a single game. The weekend series between Arizona and Los Angeles at Dodger Stadium has the potential to define the pennant race. Game 1’s pitching matchup will feature Robbie Ray against Rich Hill. Both can take over a game, but both have very clear and well-known bugaboos which could affect things. Ray has struggled with command issues this season, and Hill has already spent time on the disabled list due to his chronic blister problem.

You need to be logged in to comment. Login or Subscribe
Todd Tomasic
No love for Pirate Trevor Williams. Another 6 innings of shut-out ball leading to
the league leading 0.84 era post-all star game!
Reply to Todd