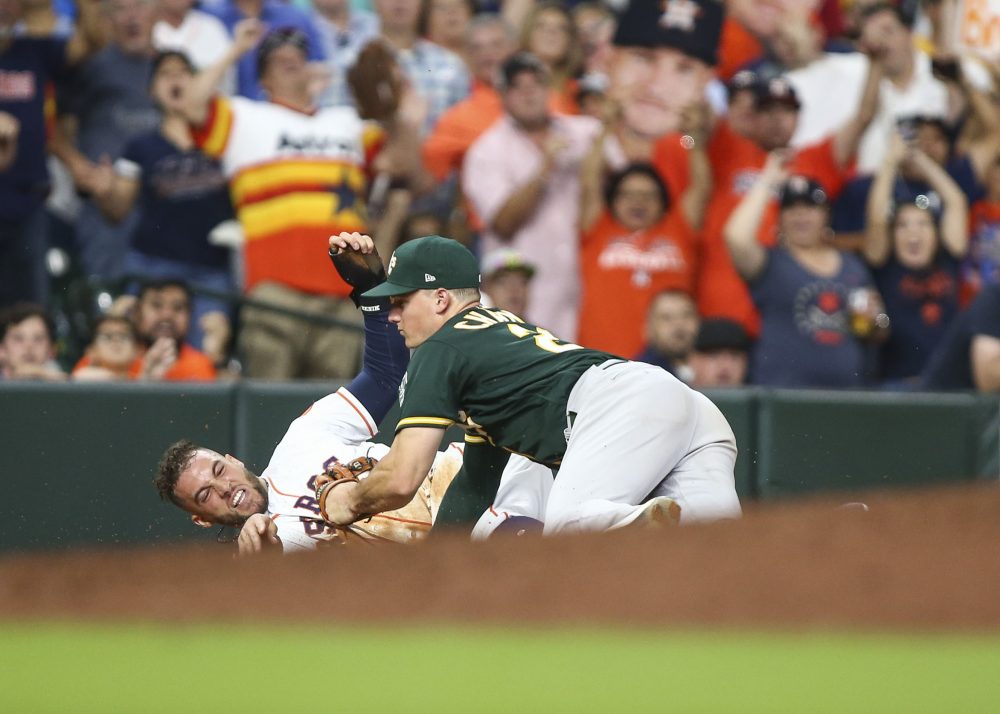 A martini, as Josiah Bartlet once explained to his young aide Charlie Young, is best when stirred, not shaken, despite the common expression popularized by James Bond.

“Shaken, not stirred, will get you cold water with a dash of gin and dry vermouth. The reason you stir it with a special spoon is so not to chip the ice. James is ordering a weak martini and being snooty about it,” the greatest president in U.S. history explained.

Nick Martini undoubtedly understands this. Had the Athletics dropped Game 2 of their final series against the Astros this year, they’d be 3 ½ games out of first with head-to-head opportunities to make up ground nearing an end.

Time to stir things up.

Martini’s go-ahead, ninth-inning double against real-life villain Roberto Osuna gave the A’s a 4-3 win and snapped Houston’s six-game winning streak, moving Oakland back within 1 ½ games of the Astros in the AL West.

Houston is still 11-7 against the Athletics this year, but Oakland will have one more opportunity to shrink that gap, and regardless will enter the month of September with a real shot at sending the defending champs to the Wild Card game. They’ll also have to do it without Sean Manaea, who is probably out for the season, and Brett Anderson, who was placed on the disabled list.

Can’t make the playoffs if you don’t beat the Padres.

I don’t know if that’s actually a rule, but it’s pretty apt about the Mariners at this point and time, as a moribund offensive performance sent them to a 2-1 loss and 5 ½ games behind Oakland for the second Wild Card spot.

The Mariners managed just a solo home run by Nelson Cruz in the ninth inning as San Diego starter Jacob Nix shut them down through 8 innings. He left after 8 ⅓ following the Cruz home run at just 78 pitches… with zero walks and zero strikeouts.

Jacob Nix is fourth Padres pitcher to ever work 8 or more innings without allowing a walk or recording a strikeout. (First since Dennis Rasmussen on April 24, 1990 vs CHC.)

The NL West is tighter than any division in baseball, and the Giants (not part of the tightness) helped out their division mates the Rockies and Dodgers by getting a walk-off win against the first-place Diamondbacks.

The game was scoreless in the ninth because Clay Buchholz and Madison Bumgarner both went seven shutout innings before the game was turned over to the bullpens. The Giants are out of the race, but in a division with three legit contenders, they will likely have plenty of opportunities to play spoiler over the next month.

The Dodgers took advantage of the Diamondbacks’ loss with an 8-4 win over the Rangers to pull within a game of first place. This despite Walker Buehler’s inability to get through five innings and another unsettling performance by Kenley Jansen (but at least with a six-run lead this time.

The Dodgers’ offense gave them more than enough, with star newcomers Manny Machado and Brian Dozier providing the main blows.

The Rockies also took advantage, and are tied for first despite a negative run differential. Kyle Freeland allowed just one run in six innings of work and Rockie-For-Life Carlos Gonzalez put them ahead for good in just the first inning.

The West is wild. The Dodgers currently have the best playoff odds despite being the only of the trio not currently able to claim they’re division leaders. The last month of the season promises to be a fun one.

The Yankees, on the other hand, had to come from behind to beat their considerably worse opponent.

Boston’s recent struggles have put the Yankees within striking distance in the AL East. Either way, methinks both of these teams are going to be playing in October. Just a hunch.

The Cardinals took the interim off Mike Shildt’s managerial title, which makes sense since they’ve been on fire since they replaced Mike Matheny with him. They put some distance between themselves and the plethora of NL Wild Card contenders thanks to another strong outing from Rookie of the Year candidate Jack Flaherty.

One of the favorites for the NL Cy Young despite his and his team’s porous records did as he did all season against the Cubs at Wrigley. And yes, they didn’t lose. But they didn’t win either.

The Cubs and Mets will resume their suspended, extra-inning game on Wednesday afternoon. There’s still time yet for the Mets to blow another deGrom gem.

The Astros may have lost, but it was not because of center fielder George Springer, who Statcast says did a good and hard thing that a more average fielder probably wouldn’t have done!

Start your day off right by watching the Mets complete their (likely) extra-inning loss to the Cubs, before flipping over to see the rubber match of Astros-Athletics, with Dallas Keuchel taking on Trevor Cahill. David Price and the Red Sox will look for more separation between them and the Yankees as they take on the Marlins again at Fenway, while in New York the Yankees will send CC Sabathia to the mound against the White Sox’s Reynaldo Lopez. The Rockies get the day off, but the Dodgers will send Alex Wood against Mike Minor and the Rangers, while the Diamondbacks and Giants continue their series with Zack Godley facing Lil Pudge Dereck Rodriguez.