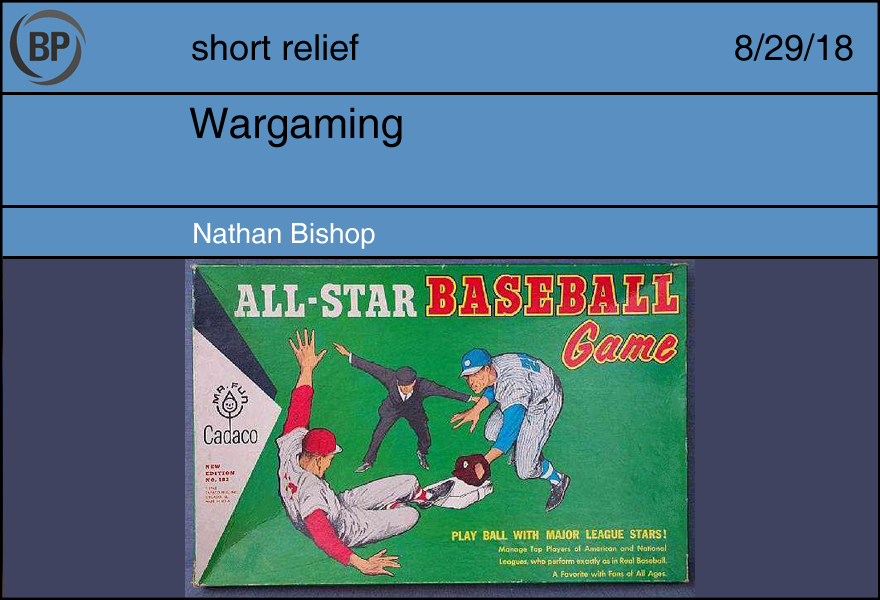 As a thirty-something father of two, I spend a lot of time sharing. Sharing space, sharing money, but most of all, sharing time. I’m a personality easily overwhelmed by stimuli and socializing, and well, parenting supplies a large dose of both of those things. The usual social retreats — video games, exercise, drinking alone in the bath — all feel fairly isolating and more self-indulgent than my cripplingly self-denying nature will allow for regularly. This is how I found board games. Board games can be played together, but also alone. They can occupy a space without dominating it. They are perfect for me, in this time of my life. I play a lot of board games.

Board games, like nearly all imaginative play, exist on a spectrum between abstraction and realism. Abstraction simplifies the rules, strips away exceptions, and sacrifices thematic depth, typically in an effort to shorten the time needed to learn and play the game. Chess, the most famous and widely played board game in the history of mankind, is a largely abstracted game.

On the other side, we have the thematic games; wargames, miniatures games, grand simulations of epic conflict. These heavy, component-laden boxes do not offer the ease of entry of their more abstract cousins, but come with an unspoken (and often false) promise: If you learn me, if you invest your time grocking and playing me, you will have an immersive, unforgettable experience.

Baseball is not a board game, but being a fan of a baseball team offers similar choices regarding how you choose to engage it. For many, baseball and its players are the abstracted series of slowly accumulating figures known as fantasy baseball. For a few, the immersion into the industry, and the lives of the people in that industry, become the labors of a lifetime. For most of us, as it is with most things, we will settle in between the two extremes.

For a long time in my own life, being a baseball fan, and more importantly to me, a Seattle Mariners fan, was a primary source of self-identity and entertainment. That made the process of abstracting the players down into their feats on the field, and how their performance affected My Team, a lot simpler. Over time though, as I’ve grown older than most of the players, as my concern over My Team’s well-being has waned, I’ve found myself sinking deeper into the complicated rules, sub-rules, exceptions, and clauses that comprises the daily existence of a group of twenty-five very wealthy men spending six consecutive months trapped together thwacking and throwing a small ball.

I’ve wondered for awhile if this is simply how it works with things in life. We find something that appeals to us, enter through one of its various gateways, and then stick around long enough to realize the stories and people are the reason we’re still there. Today, we spend an afternoon playing backgammon with our aunt, tomorrow, we block out a month for The Campaign for North Africa. In college, we spend thousands of words arguing why our team’s general manager needs to keep a prospect down to avoid Super Two. Today, we get misty-eyed at Jean Segura’s wife having a baby, so much so that we don’t even think about his three-day absence, and what it means for the team. I think, for now, I’ll take the realism. 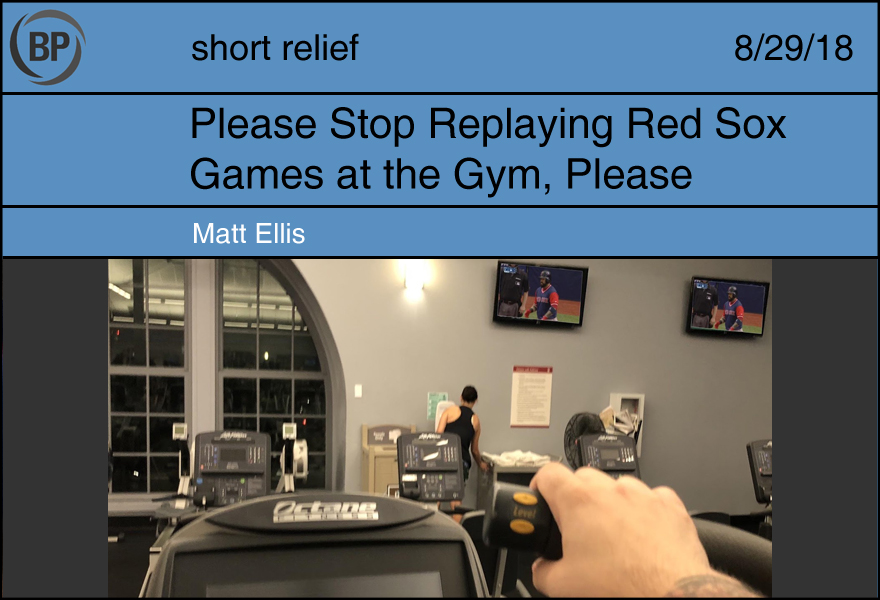 Andrew Benintendi and his Somerville hair. I get it. I saw Chris Sale and I saw Rick Porcello throw better than David Price, I did. I saw the commercials where the boys all stanned for the Jimmy Fund and they put on their uniforms that Carlton and Ted used to wear. I saw it all.

I understand I live in the broadcast area. The television rights would tell you the northeast is one large homogeneous sphere of influence and while I know that isn’t true, I understand how the contracts work. Still, I’m telling you:

This is a college gym. I am a graduate student. Everyone here comes from somewhere else.

Sir: it’s 11 AM. I don’t need to see what Steve Pearce did last night. It’s 2PM, I’m just as busy trying to avoid that English Professor who thinks I’m a fool as much as I’m trying to avoid watching Jerry Remy on repeat tell me about what happened, a day later. It’s 2018! You have 500 channels! Why play the game on repeat until the sun sets?

I suppose I understand that I should be just as grateful that people are even playing baseball in the first place. But I’m trying to run off my afternoon beers, make myself feel better about my spindly limbs on the ten-minute-at-a-time machine the undergrads line up at to tell me my thirty-something ass needs more of. I don’t need any more red and white.

Maybe I’ll just move back to the West Coast. 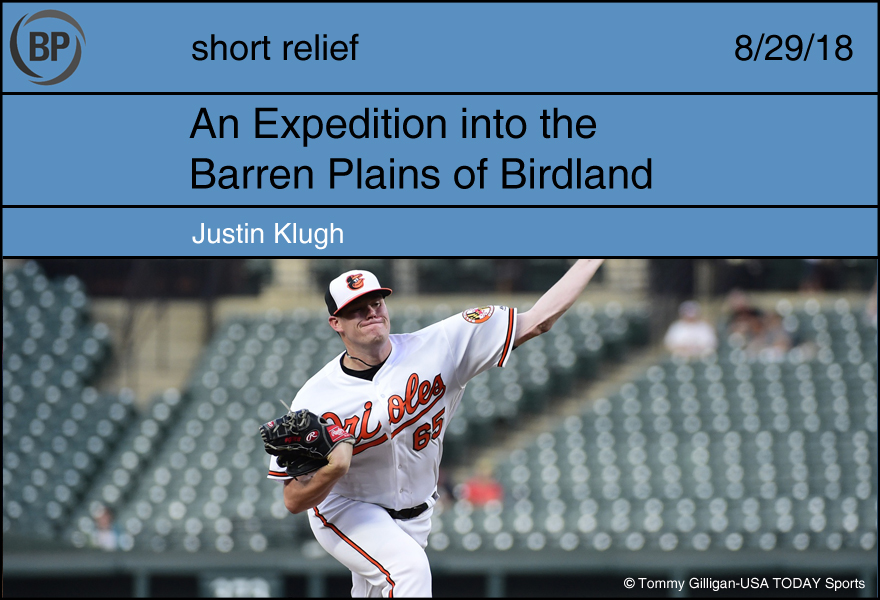 There was a time when the people coming into Baltimore were Orioles fans–not Yankees fans getting off a bus, the word “RESPECT” proudly misspelled across their shirts, or Red Sox fans buying up Birdland real estate, section by section. In 2012, the Orioles were battling in the AL East for a playoff spot, and as the Yankees came to town, Twisted Sister hit the nail on the head over the Camden Yards loudspeakers: “We’re not gonna take it anymore.”

It didn’t matter that he Orioles did not win the World Series; it mattered that they were able to take back their own park and make Camden Yards more than just an unwilling host for fans of visiting teams to populate. That ended this past July, with Manny Machado and all the other promising young faces scattered among teams with half a shot at the playoffs. Weeks before, a young child had held up a sign at the park, “WE’LL MISS YOU MANNY;” a prophet of doom, but one who everyone knew spoke the truth. The cruel reality of math had the O’s eliminated faster than any team in the divisional era.

And so, we’re left wondering what Camden Yards looks like now, the ignored home of a last place team. Eyes have turned largely to more exciting races, better teams, and developing rivalries. At this point, all the Orioles can offer you is Machado jerseys, 50% off in the gift shop.

But chin up, children–we’re still heading down to Camden Yards. A trip to the historic stadium is a fun day for the whole family, as long as you don’t care about the skill of the sport on the field or the color of the winning team’s uniform. Children not young enough to understand baseball’s more advanced statistics can still be charmed by Tim Beckham’s infectious smile. Children, with their weak, small hands, also can’t peel back the single layer of the Orioles franchise necessary to see a cowardly, conniving ownership group incapable of putting a competitive team on the field unless it’s by accident. That’s why they call it a “child’s game!”

We have now re-entered a familiar era of Orioles baseball; which is to say, the same era of Orioles baseball we were in not too long ago. One in which Camden Yards is simply a cheap weekend trip for fans of divisional rivals, and not the iconic home of a storied franchise, thundering with applause for balls landing on Eutaw Street and the merry warbles of John Denver. It’s tough to get people to dance to “Country Boy” when the team’s down 12-0 and Giancarlo Stanton’s licking his lips in the on-deck circle.

And that is most unfortunate, as this is a region where fandom can thrive when it’s given a reason to. My father, an avid Orioles fan, still laughs fondly as he recalls Memorial Stadium as a place where a Yankees fan was far more likely to catch a fist than a foul ball. Now, when a cheer goes up in Baltimore, it’s probably going to be Yankees fans, with Orioles supporters having retreated, stashing their orange shirseys under the floorboards until the next time they hear Twisted Sister.

“Hats here, hats here,” cried a vendor outside the stadium after a recent shellacking and an attendance spike courtesy of buses with New York license plates. The merchant was presiding over a table of smiling cartoon birds with a fistful of money in his hand. “All sold out of the Yankees,” he shouted. “Orioles hats five dollars!”