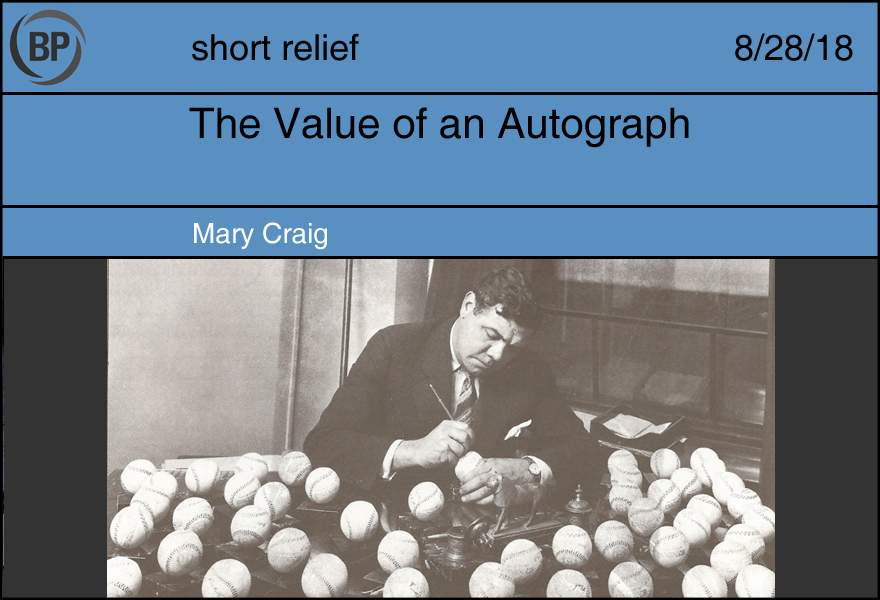 In my room at my parents’ house, there’s a bookcase devoted less to books than various autographed baseball memorabilia, from balls to bats to… a few books. I’ve received few by my own hand; most arrived as gifts. If not for the authentication cards accompanying them, I wouldn’t be able to discern the names scribbled haphazardly across the leather and wood.

Signatures in Ancient Greek and Roman times were means of authenticating documents and artifacts as well as giving consent to legal matters. Though signatures were prized possessions, it was only their appearance on such artifacts that gave them worth. It was not until the Renaissance period that people began collecting signatures for the names themselves. In the 16th century, it became customary for people to collect signatures of their family and friends in “books of friends” as a means of displaying their stature. The practice became so fashionable that King Charles I of England kept one despite possessing far grander assurances of his power.

Then, in the 1700s, members of the aristocracy throughout Europe turned their attention to collecting signatures of prominent figures in history, such as John Milton and Peter the Great. This century also brought forth the first professional autograph collector, a man by the name of John Thane, who amassed 269 autographs, which he replicated in his 1789 book succinctly titled British Autography: a collection for Fac-Similies of the Hand Writing of Royal and Illustrious Personages, with Their Authentic Portrait. The book sold so well it was re-printed with additions in 1819.

A byproduct of the rise of autograph collectors was an increase in donations of artifacts to museums. At the beginning of the 19th century, Lord Frederick Campbell donated to the British Museum the earliest English signature, that of King William II, the third son of William the Conqueror, circa 1090 CE. The donations increased when, in the 1830s, autograph collecting was opened to the public market, and living as well as deceased figures were targeted. Famous figures, like President Zachary Taylor, were asked for their autograph in person and via letter. By the early 20th century, autograph-selling became a rather lucrative job, and various autograph shops appeared in populous cities like New York. Approximately 500 years after autographs became valued, they were a thing most anyone could own.

As somebody whose signature reflects the fact that cursive writing was abandoned in middle school, it seems odd that my bookcase full of scribbles might possess actual monetary value. Perhaps the 18th century European aristocracy had the right idea in valuing only those autographs linked to valuable instances in history. Assuming this perspective, it would be easy to clear out my shelves of the autographs from players whose careers span only a handful of Baseball Reference rows. But my shelves nonetheless remain full, because maybe history is not one great autograph, but 269 bound together. 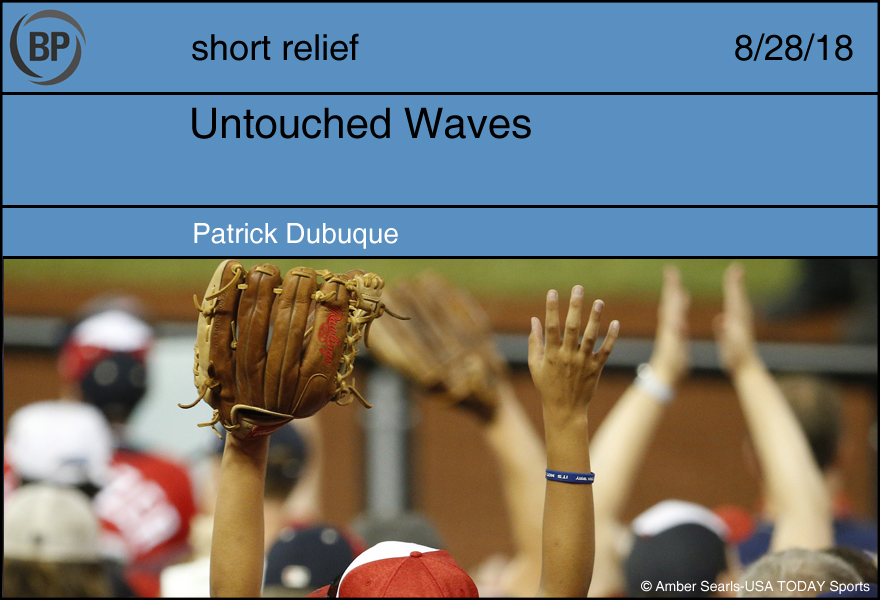 As with other noted cultural appropriations, the Wave didn’t begin in Seattle, but the city did popularize it, during football games at the University of Washington and the Kingdome. At Safeco, it is a near nightly phenomenon, almost regardless of WPA. The Wave has gone in and out of fashion — in these permissive times, the attitude of “let people enjoy themselves” is on the upswing. I’m not sure any of the people who stand rhythmically these days feel that sense of civic pride, but also, I’m not sure why they do it at all.

I think it must be a genetic impurity on my part, like a poor sense of smell or a heightened sense of introvertism, that renders me immune to the madness of crowds. Before the top of the third, a baseball-related shell game broadcasts on the big screen, solvable by the most distractible of kindergarteners, and yet 25,000 people scream “two!” lustily in unison as the middle hat reveals the baseball. Later they wager nothing on a simulated hydroplane race, the same way that the Romans bet money on whether a roll of the dice would come out odd or even. And then, at the end, they perform their own test, a final exam of their collective fandom.

I can imagine that first time, when a man named Krazy George (no clue whether the moniker was the cause or the effect of his triumph) passed his idea along one section and then ran down the aisle, hoping the rest of the stadium would catch on. I can imagine how it must have felt to pull it off. But we’ve done it. We’ve proven that it’s possible. Which makes its nth iteration, in the eighth inning of this depressing little 3-2 loss in process, so confusing. What compels one person to get up and try it again?

This all sounds very cynical, and I suppose it is. I actually include myself among those tired of punishing consensual crimes, stadium-centric among them. But I guess the only conclusion I can draw is that the Wave is a prehistoric example of the internet meme: an act repeated for the sake of repetition, creation without mind for what is created. A joke made more for the telling than for the laughing. It’s a more harmless variant, in the sense that memes demand attention, crowd out originality, whereas the Wave can be bypassed with little cost.

I wish I could stand and make that high-pitched woo noise at the appropriate time, and I wish I could yell at the hyrdos. I did as a boy, and I lost that somewhere. It may have been some degradation inside me, or perhaps it was the erosion of that hundredth crest, the horror of boredom setting in. It’s just not enough for me to be part of a giant crowd accomplishing nothing. I can do that at home. 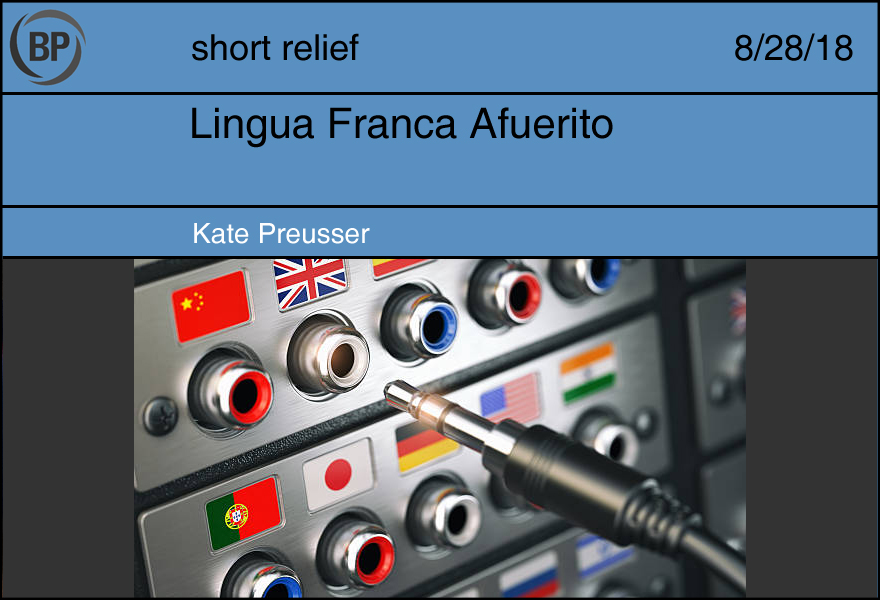 Long out of school and lacking opportunities to practice Spanish in my daily life, I’ve tried to hack my language learning. I watch Spanish dubs of TV shows I’ve seen enough times to be able to follow the dialogue, or plug in to Spanish broadcasts of baseball games where I can guess at what’s going on based on context clues and then have the At-Bat app confirm my suspicions a couple (or ten) minutes later. My ability to structure a sentence remains around a kindergarten level, but my vocab now includes useful words like “afterlife,” “parks department,” and “vampires.” From baseball I’ve gotten the useful word “afuerito”–”just a bit outside.”

Practicing Spanish is humbling for me, someone with a deep knowledge of the English language. Knowing root words and cognates is a rope that only extends so far into the dark cave of all the Spanish I don’t know. Even pairing it with a familiar subject, like baseball, isn’t as helpful, despite all the friendly cognates lighting the way: primera base, base por bolas, pitcheo, strike. As soon as anything exciting happens, the announcers also get excited, and talk faster, and over each other, and the small thread of understanding I’ve been tracing over the inning immediately wads into an incomprehensible Gordian knot.

Flailing about in Spanish a few times a week deepens my respect for players who don’t speak English as their first language, and spend all their days in this country feeling their way through an unfamiliar language in an unfamiliar place, especially the minor leaguers stationed in places like Clinton, Iowa or Buies Creek, NC. Spanish-speakers have teammates to help, and anyone with WiFi and a Netflix password can hook up to a show to watch: Friends is a popular choice, at least with the current generation of MLB players. I look forward to the generation of language-learners who cut their teeth on Stranger Things and Orphan Black. (“The upside-down” is a useful phrase, especially if one is a member of the Mets organization.)

But it also deepens my distaste for those who disparagingly tell players to “learn English,” like it’s as easy to do as switching over the laundry or bandaging a cut, like it’s not a terrifying descent into a cave where you can’t see the bottom. “Learn English” itself wouldn’t be problematic if it wasn’t presented as an imperative, a claim that only people who speak English belong here, and a subtle implication that if you don’t learn English, you’re somehow lazy or lesser-than. Imagine taking the precious words you’ve been gifted in your native language and using them to say something so ugly.