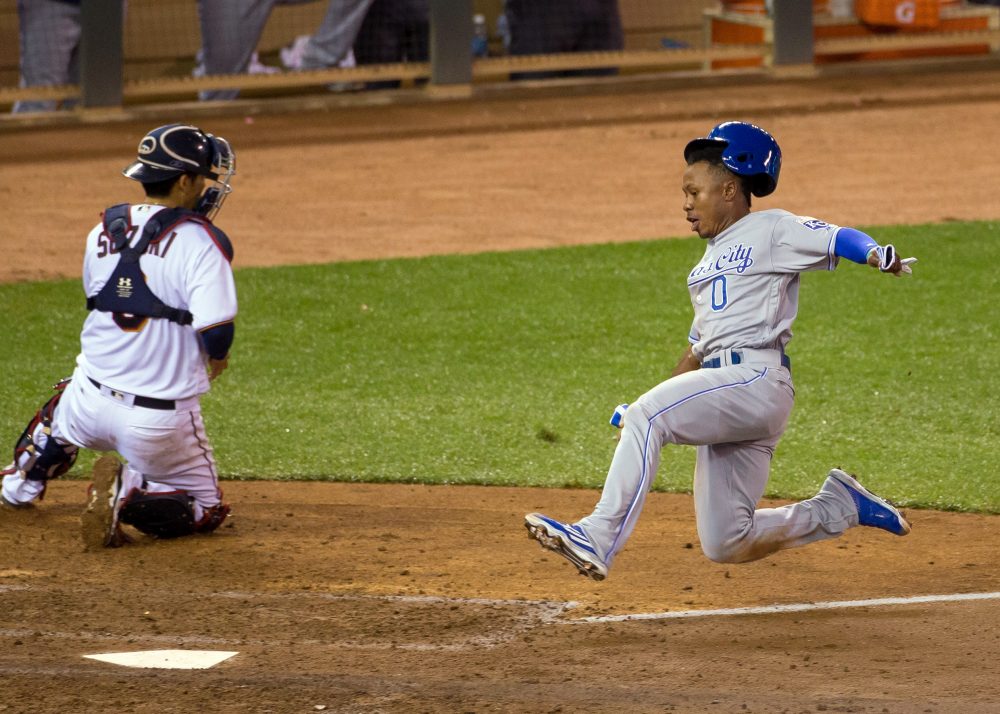 Chicago Cubs acquired OF-R Terrance Gore from Kansas City Royals in exchange for a player to be named later or cash considerations. [8/15]

Quintin Berry has spent all season in the minors, hitting just .214/.290/.321 in 42 games at Triple-A for the Brewers’ affiliate before being released last week, and the 33-year-old outfielder hasn’t logged double-digit at-bats in the majors since his rookie season with the Tigers in 2012. So why did the Yankees bother signing him to a minor-league contract one week before the end of the minor-league season, and why did I bother writing about him here? Because he’s really fast and postseason pinch-running is really fun.

I’m not sure that the likely expected value provided by having a banjo-hitting speedster on the bench in October quite matches the enthusiasm with which playoff teams add them to rosters. After all, not only does using a player like Berry to great impact require a late-game situation involving a slow player being on base as a key run, it also requires a manager being willing to remove that slow player from the game and then requires the move to actually pay off with a run being scored by the fast player that wouldn’t have been scored by the slow one. It’s a lot of dots that need connecting.

On the other hand, when those dots do connect—like, say, a pinch-runner stealing second base and then coming around to score the go-ahead run on a bang-bang play at the plate—there’s probably no better feeling for a manager. New York signed Berry specifically for the slim chance that Aaron Boone may pull those strings even once in October, and earlier this month Chicago acquired former Kansas City postseason pinch-runner extraordinaire Terrance Gore so that Joe Maddon can potentially attempt the same.

Berry has hit just .241/.337/.309 in parts of eight seasons at Triple-A, while Gore has slugged .273 with a grand total of one home run in 2,260 plate appearances as a minor leaguer. Yet they both have World Series rings. Gore has swiped four bases and scored two runs in eight career postseason pinch-running appearances. Berry successfully swiped a base in each of his three postseason pinch-running appearances for the Red Sox in 2013, and never batted once.

Berry is 33, which is geriatric in the world of running your way onto a playoff roster, but he was 10-for-11 swiping bases at Triple-A this season despite rarely being on base. Gore is 20-for-25 on steals this season, which is impressive considering his lowly .285 on-base percentage and the fact that every opposing team knows he’s going to take off. For his minor-league career, Gore has stolen a remarkable 78 bases per 600 plate appearances, and done so at a 90.1 percent success rate. Gore is the gold standard for postseason pinch-runners, while Berry is the nostalgia pick looking to make one last … well, run.

Regardless of the likely value being provided, I enjoy the idea of postseason pinch-runners if only because it’s something different. MLB rosters have been finding less and less room for pinch-runners or pinch-hitters or defensive replacements or platoon bats or really just about anything other than a whole bunch of relief pitchers. At this point, the majority of teams carry no more than three or four bench players, at least one of whom is a backup catcher. There’s no room to mess around with someone who might do something interesting by running really fast once per week, and part of me thinks that’s a shame.

October is different, though. Thanks to off days between games and series, teams rarely need fifth or even fourth starters, and the bulk of bullpen work goes to a closer and his top 2-3 setup men. That in turn gives back a part of the roster to position players, except with most managers trotting out the same lineup in nearly every playoff game, and most teams not having great pinch-hitters on the bench because they didn’t have room for them during the regular season, the speedy guy who can’t really do anything else emerges as an appealing option for the 25th spot.

You need to be logged in to comment. Login or Subscribe
tearecrules
Brian McCann does not score from second on Alex Bregman's single to left. Derek Fisher does.
Reply to tearecrules