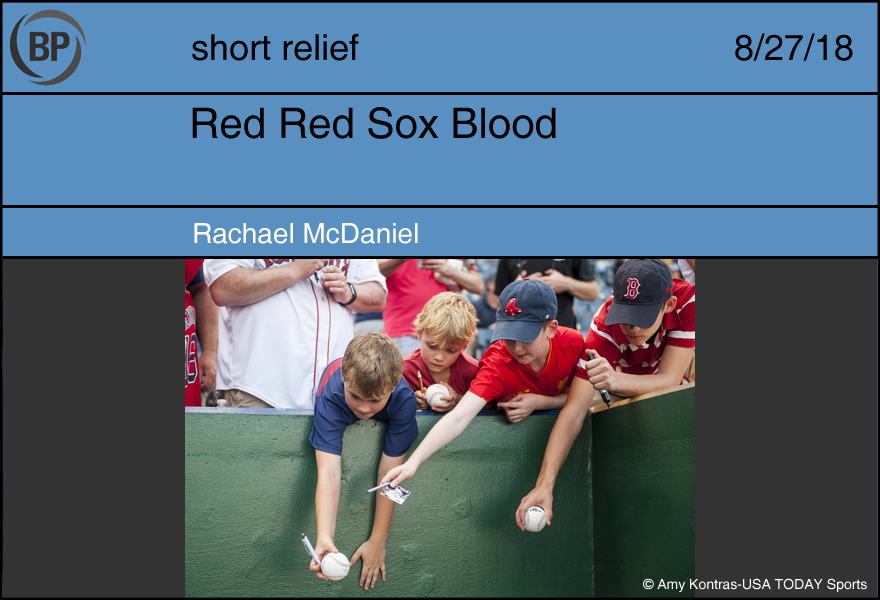 What I wasn’t prepared for was this quote from an article from April 13th, 2005, documenting a celebratory event the Red Sox held allowing fans to go on the field at Fenway:

“I didn’t think I would live to see this happen,” said Borden, wearing a red team hat. “It’s emotional, because I’m a true Red Sox fan. I have red Red Sox blood.”

Art Borden, the fan who said these perfect words to reporter Katie Zezima, was 80 years old at the time this event in 2005 took place. He was there on the field at Fenway with his 21-year-old granddaughter, presumably a fellow Red Sox devotee; he had first visited Fenway Park 71 years prior. He said that it still gave him chills just going to the ballpark. And there he was, standing in the same place he’d watched so many players pass through over the decades — standing there looking at Pedro Martinez’s diamond-encrusted World Series ring, looking at the huge championship photos plastered on the center field wall, because the Red Sox had finally won the World Series.

I haven’t been able to figure out when people first started using blood as a metaphor for fandom. I know it’s been several decades at least since it started appearing in newspaper headlines, and it makes sense that it’s so common. People’s defining experiences of fandom are so often experiences of pain, or at the very least of hearing your own blood rushing in your ears with anxiety. So it’s not that Borden was doing anything particularly original with his language.

I just love that this elderly man, standing in the falling snow in his red Red Sox hat, experiencing the fulfillment of a lifetime’s worth of wishes and in search of a way to describe the depth of his emotion, chose this specific way to do so. Not only was his blood red with oxygen, red because he was still warm and alive at 80. It was even more red that, even on that cold April day at Fenway, because he was a fan of the Red Sox. 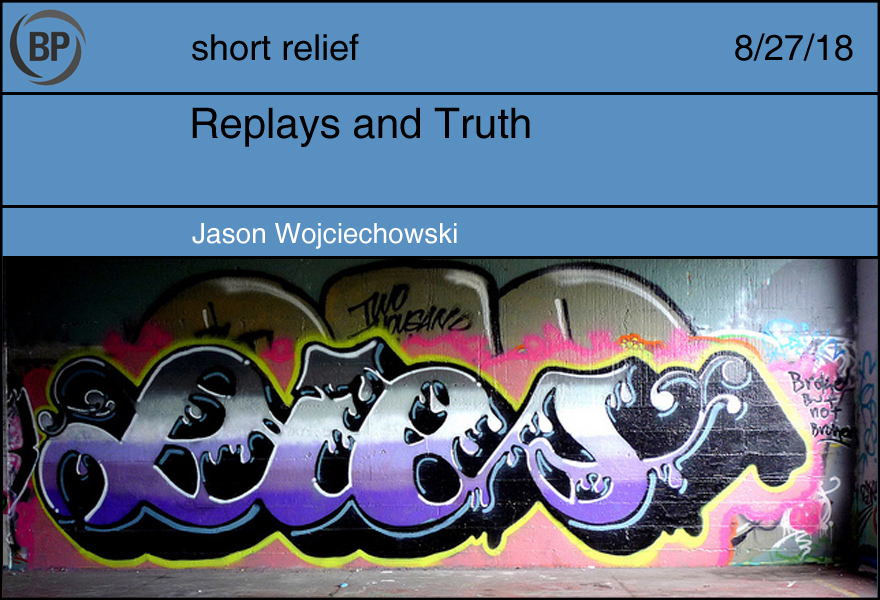 It will not surprise you to read that I think instant replay sucks an extremely large and probably rancid lemon. I do not believe I have previously explicated my opposition in these pages.

The first reason is that lawyers are not doing the reviewing. Burdens and standards of proof are deeply ingrained in the minds of attorneys, probably to the detriment of our emotional health, especially when we’re watching baseball. Clearly the replay umpires, five years into the current experiment, have no earthly idea what the standard of “indisputable evidence” ought to mean. “Indisputable” is arguably an even more difficult burden to carry than “beyond a reasonable doubt” because it might mean “beyond any doubt, reasonable or otherwise.” If one video angle appears to show the runner safe, and another appears to show the runner out, then both the safe call and the out call can be disputed, and therefore the call must stand. We have all seen enough replays to know at this point that this burden is not being seriously applied.

The second reason is that video footage is a lie. The ostensible purpose of instant replay is to uncover the truth better than human eyes and the human brain can do it in real time. We’re being sold a bill of goods, though, because we’re expected to believe that photography has any relation to truth. Have you seen proof that what a camera captures is in fact what happened in reality? I have not. Until the day that arrives, it is plainly irresponsible for Major League Baseball, to say nothing of Little League Baseball, to continue relying on video evidence for its instant replay system.

If baseball wants instant replay, then I say baseball should take the name seriously: Run the play again in reality, not on video, with the other three umpires watching, and have them vote on whether to confirm or overrule the original call.