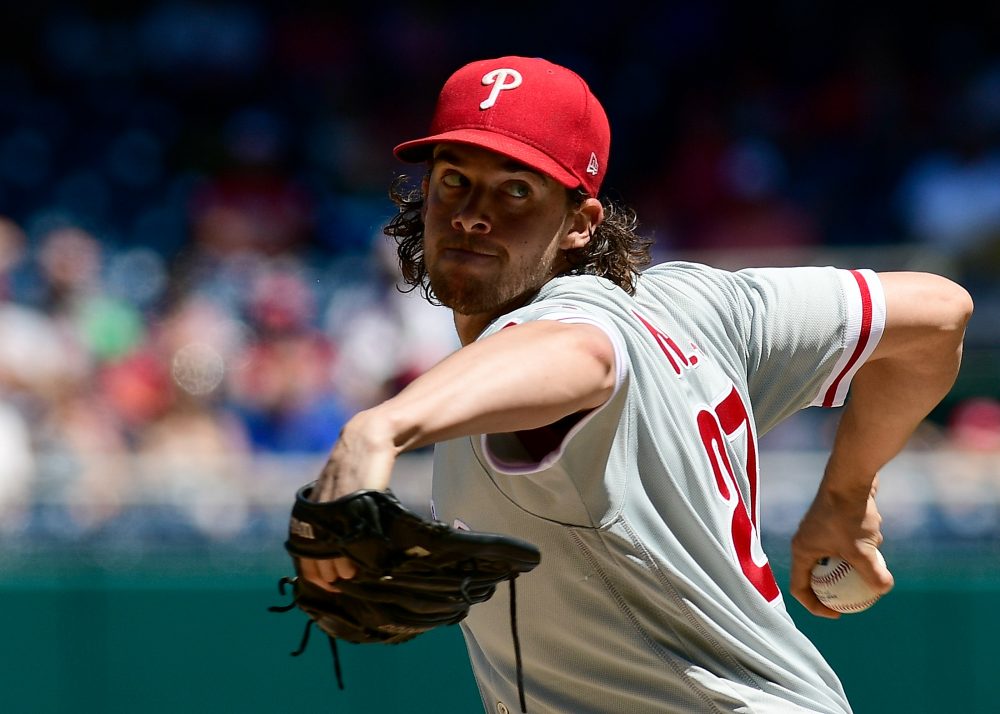 Even though the Phillies have been one of the league’s pleasant surprises, it hasn’t always been sunny for Philadelphia this season. In fact, things were getting downright cloudy for the Phillies when they went on an ill-timed four-game losing streak against the likes of the Mets and Nationals—a team whose front office has resigned itself to its unfortunate fate. Simply put, the bleeding needed to stop immediately for Philadelphia.

That’s where Aaron Nola came in. The 25-year-old righty has been outstanding and his latest start came at a moment when his team needed him the most. Philly had to stop the skid while the Nationals were sending Max Scherzer to the mound.

Sure enough, both aces lived up to their reputation. On a nine-inning scoreboard, there are 18 possible score columns to fill out. Only one of them had a number other than “0” in it and it came in the top of the seventh inning with Scherzer still on the mound.

Maikel Franco turned a battle of an at-bat into a walk, and Odubel Herrera came through with a moonshot that reached the second deck out in right field.

The way Nola was pitching, those two runs ended up being all that Philadelphia needed. Scherzer was good but Nola was great; he finished with nine strikeouts and only one walk. More importantly, he kept Washington off the scoreboard for eight innings. 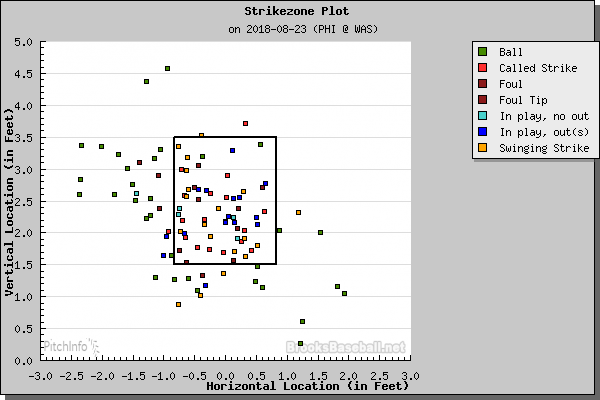 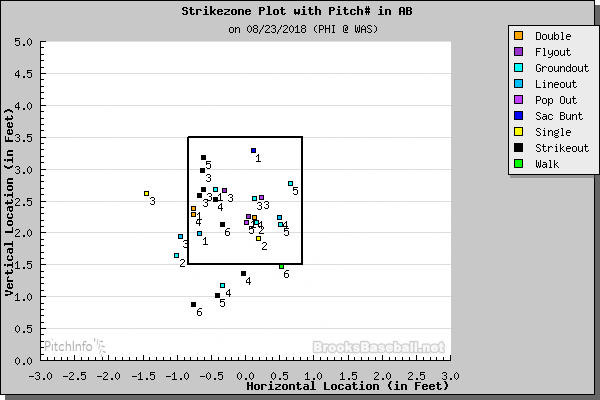 While Nola deservedly will receive plenty of Cy Young-related plaudits for his effort against the Nationals, the even bigger role he played was keeping the Phillies within striking distance of the Braves in the NL East. This race is going to get bumpier before it’s over, but the Phillies can at least count on Nola to be able to keep the car stable on their way to the finish line.

One star shined brighter this afternoon in a pitching matchup that lived up to the hype. #GeauxPhils pic.twitter.com/X2cINIfWXr

For the first time since their kerfuffle Aug. 15, the Braves and Marlins squared off. The Braves picked up where they left off by beating Miami again and Ronald Acuna also picked up where he left off against the Marlins. He didn’t hit a leadoff home run, but he did hit one that was reminiscent of the towering homers that Giancarlo Stanton used to hit at Marlins Park on a regular basis.

This ball should be landing in South Carolina sometime early next week.#ChopOn pic.twitter.com/R4Y1U14c7R

The home run landed with enough force that it actually caused damage to the ballpark.

Acuña has officially left his “mark” in Marlins Park. This is where his 432-foot HR hit. #Braves pic.twitter.com/9js0ErOAp7

I’d say that makes up for the mark Jose Ureña left on Acuna during their previous encounter.

Speaking of monster home runs, this one from Javier Baez easily qualifies. It was measured at 481 feet and it doesn’t really seem like they embellished that number in any way. You aren’t going to see many dingers hit to that part of Wrigley Field.

While Baez was busy finding new and interesting ways to dot Wrigley Field with his homers, Cole Hamels slapped the cuffs on the Reds. He gave up an RBI single in the first inning that put the Reds ahead for a brief moment. That would be the last time the Reds got on the scoreboard with Hamels going the distance.

The San Diego Padres are firmly planted in the cellar of the NL West, but they’re at least showing signs of life on the field. They had a putrid July, where they went 5-20—which tanked their season—but they’ve won eight games this month and haven’t gotten blown out. So it wasn’t a huge shock to see that they were in position to cause the Rockies some headaches and steal a series victory at Coors Field.

In fact, Kirby Yates had the Rockies down to their last out with a man on base and Ian Desmond at-bat. Frustration turned into joy in the blink of an eye.

NEVER. EVER. GIVE. UP. 🔮 pic.twitter.com/E7cJAoSWb1

The Red Sox might not be leaving Cleveland with a series win, but they will be going down to Tampa Bay with the comfort of knowing that they’re already the first team to reach 90 wins this season. No, your calendar is correct—it’s only late-August and they’re just 10 wins away from the century mark.

Boston picked up a comfortable 7-0 victory and the star of the show was David Price. He got the memo from the other pitchers who had stellar performances yesterday and delivered one of his own:

Meanwhile, in New York, the fans at Citi Field were treated to a pitcher’s duel between Madison Bumgarner and Jacob deGrom. DeGrom gave yet another performance that should have been good enough to win but, instead, it had you feeling sorry for him, and how he has to toil in obscurity.

On the other hand, Bumgarner reached back and delivered a classic performance. We haven’t seen something like this out of Bumgarner in a while, but it was definitely a welcome sight. He went eight innings and only gave up one run and he also contributed at the plate as well. That sounds like vintage Bumgarner for sure.

Despite slugger Khris Davis hitting his league-leading 39th homer, the Athletics lost to the Twins. One of the turning points came in the fifth inning when Marcus Semien hit a blooper into shallow left field, and Matt Olson thought for sure that he had a chance at scoring. Eddie Rosario had other ideas.

Don’t look now, but the Cardinals are solidly in contention for the Wild Card, and are also within reach of the Cubs at the top of the NL Central. They’ve been playing some fine baseball over the past couple of weeks, so postseason baseball for St. Louis is now feasible, instead of the impossible dream that it seemed while Mike Matheny was running the dugout.

This weekend will bring an interesting challenge for the Cardinals, as they’ll be traveling to Colorado to face the Rockies. Colorado also is very much in the Wild Card race and has been playing just as well as St. Louis. Even though it’s late August, this series could be a huge one when it comes to determining who gets to play in October. Plus, do you really need an excuse to watch Matt Carpenter and his .338 TAv hit the baseball right now?