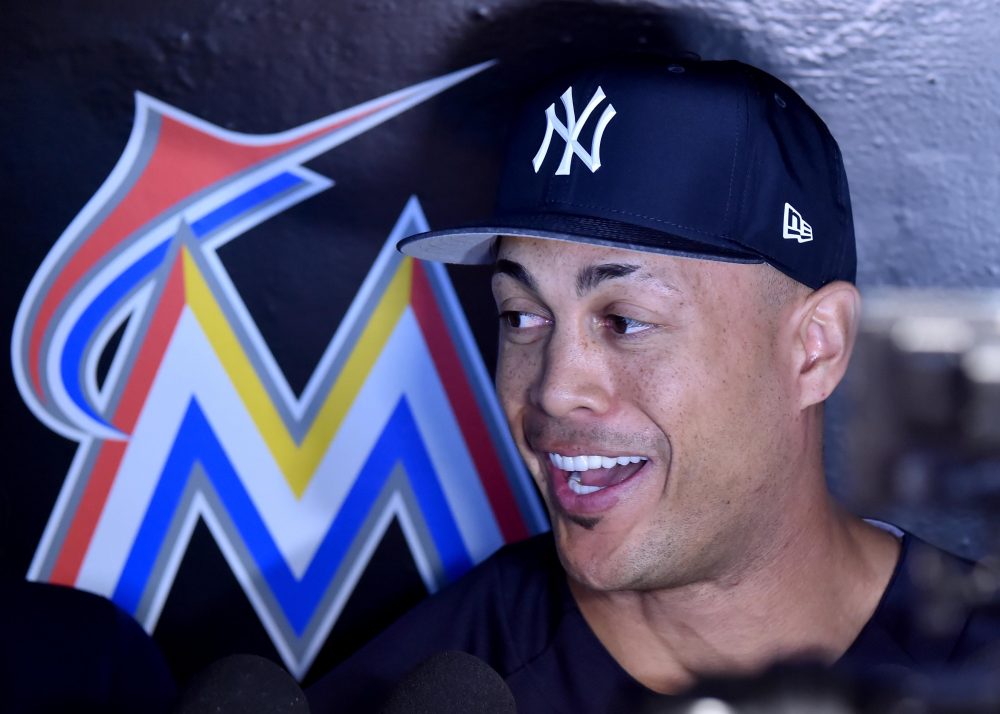 On Dec. 7, the Miami Marlins traded Giancarlo Stanton to the Yankees. About 8 1/2 months later, Stanton made his first return to Miami. The crowd was predictably nostalgic:

Stanton, to his credit, did his best to return the love in turn. And the Marlins, playing the role of spoiler the rest of the way, did their best to ruin the love-in.

Neal Walker opened the scoring in the top of the fourth with an RBI single to right off Miami starter Pablo Lopez. An inning later, the Marlins equalized. Rookie left fielder Austin Dean got ahold of a pitch and sent it into the bleachers:

Masahiro Tanaka and Lopez matched each other pitch for pitch, almost. Six innings apiece, four strikeouts per pitcher, and a 1-1 deadlock on the scoreboard. It remained that way as both teams entered the 12th inning.

In the top half, Miguel Andujar broke the tie with a sacrifice fly to score Kyle Higashioka. The Yankees had a 2-1 lead—and so, as they tend to do in save situations, they turned the ball over to Aroldis Chapman. But Chapman threw just six pitches—five for strikes—before the dugout decided they had seen enough.

Aroldis Chapman is leaving the game with an injury. He tried to wave Boone and Steve Donohue back, but they weren't having it.

Chapman’s fastball was coming in at a lukewarm 96 mph—clearly, something was wrong. Still, the Yankees have a bullpen built for depth. Tommy Kahnle came out for the emergency save opportunity and converted it, as the game ended 2-1. Higashioka, who scored the winning run, also recorded the game-icing putout on a sweet caught-stealing:

And though the pregame storyline was all Stanton, the postgame was purely focused on Chapman and his injury instead. We’ll see how things develop over the next few days.

Aroldis Chapman says he felt some of the discomfort in his knee while he was warming up. He added that this time the pain was worse then he had felt before. That prompted him to call trainers.

This is the bottom of the eighth at Guaranteed Rate Field. This is the Twins and Tigers attempting to do a baseball under those circumstances. Note how everybody involved pretty much seems like they’re being introduced to this “baseball” concept for the first time. If you love the game, this clip will try your patience:

It is always best to look cool while hitting dingers. But if you can’t pull that off, looking dumb while hitting dingers is pretty fun, too. Anthony Rizzo couldn’t keep his footing on this swing and he biffed it like a newborn duckling. The ball carried into the clubhouse tunnel. Therefore, Rizzo’s out-of-balance swing is Actually Cool Now because it’s so uncool. And so effective:

Khris Davis has owned the Texas Rangers completely and thoroughly this season. Last night, he slugged his ninth home run against Texas—and his 38th overall:

If Davis goes yard against the Rangers again he gets officially deputized by the law-enforcement Texas Rangers. I don’t make the rules, I’m just here for Khris Davis following clues and getting his man.

Michael Kopech‘s major league debut was sapped short by a rain delay. But before Mother Nature decided to make things difficult Kopech posted 2 IP, 3 H, 0 BB, 4 K, and 1 HBP. He’s gonna be up and down, but the skills are real:

Walk-off alert from Arizona! Tie game, bottom of the ninth, two runners on with nobody out for the Diamondbacks. A.J. Pollock dropped down a bunt and pitcher Cam Bedrosian went for the play at third base. But Bedrosian threw the ball into foul territory, and the winning run scored with no play:

Yes, it counts as a walk-off. No, nobody will ever brag about this walk-off win.

Between the Daniel Murphy trade and Philadelphia’s recent skid, the Atlanta Braves are in a great position in the NL East. At PNC Park, they got a pair of home runs from former No. 1 overall pick Dansby Swanson:

Greg Allen made a pair of great catches, and I very nearly gave him this spot for that. But then Kolten Wong did this:

He ranges far, far to his right—on the far side of the base, in fact—and gets to the ground ball. He hastily scrambles up and, while falling over, flips the ball off balance across the diamond. His floaty throw gives Justin Turner a chance to beat it, but the call is “out.”

The Astros and Mariners duel in Seattle, as the home team attempts to make up ground in the Wild Card race. On the mound for each team will be a 12-game winner: Charlie Morton for Houston and Marco Gonzalez for Seattle.

The Phillies are trying to remain relevant in the NL playoff race, and their opponent today is the Nationals—who just traded away two key players, essentially running up the white flag. Yesterday, the Nationals took it—today, it will be Zach Eflin for Philadelphia going against Stephen Strasburg for Washington.

The Indians and Red Sox are not unlikely playoff opponents. Today, they’ll be playing one another. The Sox’ starter, Brian Johnson, probably does not crack the playoff rotation though. The Indians’ Carlos Carrasco, for contrast? He’s going to get a playoff start at least. The fun thing about August is they’ll match up now, and anything can happen.

The Padres’ Jacob Nix saddles up for career start No. 3 at (gulp) Coors Field. He’s looked good early in his career but, well, Coors is nothing you can prepare yourself for. Facing him will be the inconsistent Jon Gray. Gray did strike out 18 Padres a couple of years ago. He’s also tossed up some stinkers this year. The possibilities are endless.