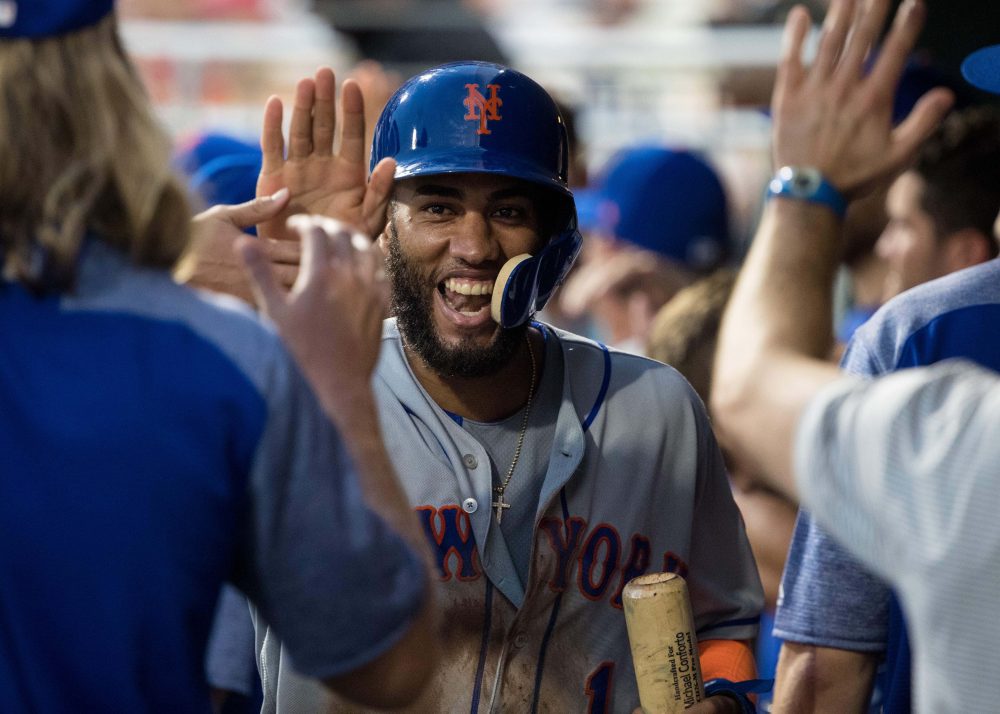 Not too long ago, the Mets season had arguably hit its low point when the Nationals unleashed an offensive barrage of 25 runs on them. It was one of those games that you had to watch with both hands covering your face while you peeked through the gaps between your fingers. It was an ugly day for the Mets and one of those games that really sticks with you.

It must have felt really good for the Mets to be on the other side of one of those shellackings. The shocking part is that the team who ended up receiving the colossal beatdown was one of the contenders for this year’s NL East crown: The Philadelphia Phillies, who have been incredibly formidable at home this season if you weren’t aware.

Something about that home cooking. pic.twitter.com/HN3pXpu5Rp

It seemed very unlikely that the Mets would continue the offensive explosion that they had against the Orioles. For the most part, it was a normal game, with the Mets leading by a run after four innings. Then the fifth inning came along and things went completely off of the rails for Philadelphia.

Ranger Suarez started off with a single, followed by a double, a balk and a two-run single from Jose Bautista to put the Mets up by three. New York wasn’t done—and that wouldn’t be the last that we’d hear from Joey Bats in this inning alone.

What followed was basically the real-life version of that episode of Looney Tunes where the Gas House Gorillas formed a conga line at the expense of the Tea Totallers.

By the end of the devastating fifth, Bautista returned to the plate with the bases loaded and a chance to make it a perfect 10. He succeeded.

We’d say this is the icing on the cake of a 10-run inning.

But this is way more delicious than icing. pic.twitter.com/qQzkTWUGdQ

The carnage continued since the Phillies chose to wave the white flag at that point of the doubleheader and put in position players to pitch. The result was that the Mets poured on nine more runs from the seventh inning onward, starting with this dinger from Michael Conforto.

When the smoke cleared, the Mets had broken a franchise record for scoring in one game and had scored 40 runs over a two-game span—the most since the Red Sox dropped 40 on the Tigers back in June of 1953. The second game of the doubleheader may have been a nice one for Philly, but we’ll all remember the destruction that went down in the first game.

Jon Lester has had a couple of absolute stinkers this season, but both times he’s followed it up with something that was closer to what is expected of him. This time, Lester followed up a beatdown against the Nationals with an absolute gem of a performance against the Pirates.

Meanwhile, in the Bronx, the Yankees ended up getting stifled by Blake Snell and the rest of Tampa Bay’s bullpen. Snell carried most of the load as he struck out six over five innings of work.

That doesn’t mean New York didn’t have chances. In fact, the Yankees had the bases loaded in the ninth inning with nobody out. Fortunately for Tampa Bay, Adam Kolarek extinguished the flames before it turned into a backdraft and the Rays were able to escape with the win.

It would be a real shame if any Yankee fans saw this.

Last weekend, Ryan McMahon turned into a clutch hero for the Rockies after he came through with some late-game heroics during their big series victory over the Dodgers. The Rockies were in Cobb County for a four-game series against the Braves and McMahon isn’t done with the late-game heroics. He delivered a game-tying RBI single that led to David Dahl eventually hitting what turned out to be the game-winning RBI single for Colorado.

Last night was a very comfortable night for the Diamondbacks in San Diego. They put up five runs in the first inning, which included this three-run bomb from David Peralta that broke the game open for Arizona.

Now that he was given a five-run cushion to work with as he took the mound, Clay Buchholz took it upon himself to make sure that he was the reason why that lead stood. He ended up having the pitching performance of the night across baseball as he threw a complete game for the Snakes.

.@Dbacks get the win 5-1 on the strength of Clay Buchholz who pitches a complete game, his first in over 3 years! pic.twitter.com/NjUZQRpj64

Defensive Plays of the Day

We had some doozies last night and one of them wasn’t even from a player. We’ll start with this umpire making a fine catch on a bat flip from Nick Castellanos.

“Hey blue, hold this for me?” – Nick Castellanos. pic.twitter.com/t6FswIkQKs

Then we had a couple of fine infielders live up to their sterling reputations with some solid plays in the field. Javier Baez made a tag at second base that looked like an optical illusion at first glance and then Nolan Arenado charged a short bunt and turned what should have easily been an infield single into an out.

However, if you turn a triple play, you win the award automatically—even if it was somewhat awkward and confusing. A triple play is a triple play so I tip my cap to the Rangers for pulling this one off.

You don’t see this every day. pic.twitter.com/6MPPS5u5Xo

The spotlight will be back on the AL West again, as things have tightened up considerably. The Astros have slowed down a bit, while the A’s have continued to beat up on everybody in sight. As such, the gap separating those two has shrunk down to only two games. That means that this is the perfect time for these teams to meet up with each other for a weekend series.

This will be taking place in Oakland so it’ll be a late start for those of you who are reading this while living on the East Coast. Still, it’ll be worth staying up late on Friday to see what happens between these two, especially with Charlie Morton (3.47 DRA, 85 cFIP) and a somewhat rejuvenated Edwin Jackson (4.87 DRA, 109 cFIP) toeing the rubber for both teams to start the game. Will the Astros hang on to their grip on the AL West lead, or will the A’s reach the summit of the division?