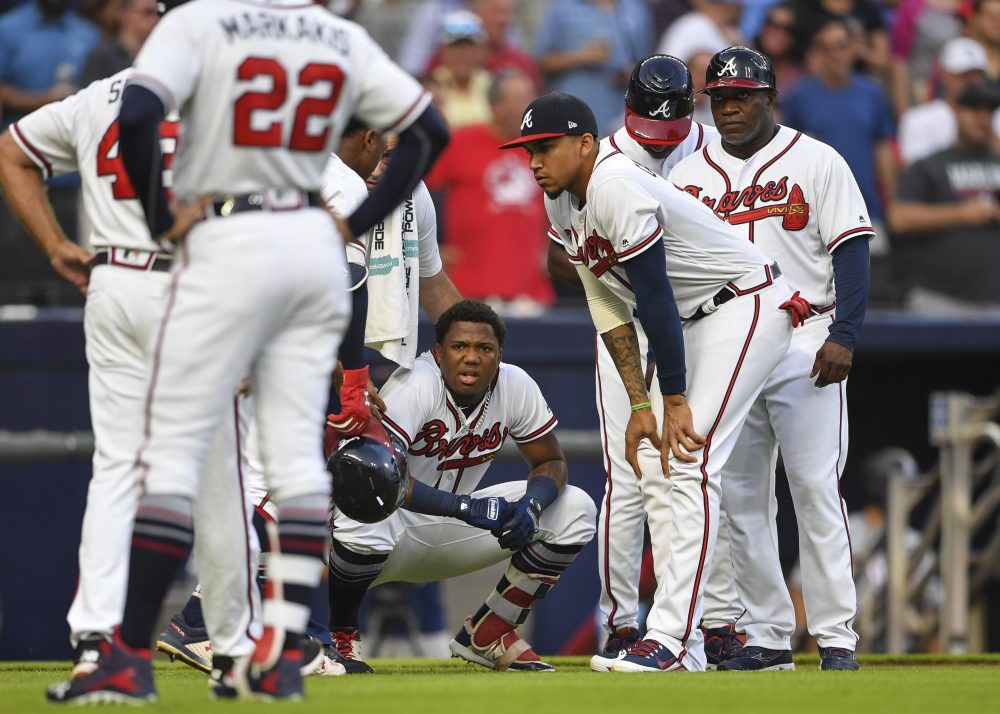 All eyes at SunTrust Park (and at home watching on TV) were peeled for Braves phenom Ronald Acuna, who was set to lead off the bottom of the first inning the against the Marlins. Everyone was waiting to see if Acuna could keep alive his eight-game, leadoff home-run streak—but Marlins starter Jose Urena had other ideas.

Instead of challenging the young hitter in their first confrontation, Urena decided to plunk him with a 97.5 mph fastball.

Acuna was hit in the elbow because he braced himself as the pitch was hurtling towards him and, after Acuna and Urena stared at each other, the benches cleared. Urena was ejected before the Braves could throw a payback pitch his way.

Acuna attempted to play the field but left before a pitch was thrown in the second inning. X-Rays were negative, and a CT scan was performed, but the Braves weren’t 100 percent sure he was OK.

Heading into action, Acuna had been scorching hot. Within his eight-game home-run streak, Acuba hit homers leading off three consecutive games, and he was coming off a two home-run night Tuesday. In a 10-6 win against the Marlins, after he led off with a first-pitch home run, Acuna also hit a three-run homer in the seventh inning, helping the Braves to a 10-6 win.

What’s disheartening about this situation, aside from the injury risk, is that Urena deprived all of us of watching a young star possibly tie a major league record in lead-off home runs. Was he not confident in himself? Did he believe that Acuna would add him to the list of pitchers he’s hit home runs against? And so what if he did? Is that really such a big deal in the grand scheme of things? No. The Marlins are going nowhere this season and the Braves are a surprisingly good team who are leading the NL East and looking to make the playoffs for the first time since 2013.

The good news is, because of quirky MLB rules, Acuna will get a chance to continue his streaks once he returns to action:

Per MLB rules, because Acuna's only plate appearance resulted in him being hit by a pitch, his home run streaks will be intact when he returns to action.

These teams meet again in a four-game set down in Miami that starts a week from today. I wonder if Ureña will start any of those games. Want to bet that he doesn’t?

The title of this section is appropriate because not only did Ronald Acuna get hit by a pitch but another hot batter, Matt Carpenter, was also hit by a pitch and had to leave the game against the Nationals in the seventh inning. Nats reliever Matt Grace hit Carpenter in the right hand with an 0-1 sinker.

The Cardinals took Carp out of the game as a precaution, he got X-rays, and they came back negative. St. Louis won 4-2.

At Oakland, the Mariners and Athletics played extra innings, and the Mariners prevailed to salvage the final game of their three-game series. Both Mike Leake and Brett Anderson had scoreless outings with Leake lasting eight innings and Anderson 7 ⅔.

The game was scoreless as they headed into the top of the 12th. A’s reliever Yusmeiro Petit replaced Jeurys Familia to start the inning, and he got Denard Span to ground out to second. Dee Gordon, who was 0-4 and struck out in the 10th inning, stepped up to the plate and well, this happened:

A day after Big Maple James Paxton went down with an injury, the Mariners needed this one. They remain 2 1/2 games behind Oakland for the second Wild Card. As for Oakland, its loss coupled with Houston’s 12-1 win over the Rockies pushed the A’s two games back for the division lead.

And let’s talk about the Astros, shall we? They were mired in a nine-game home losing streak, besieged by injuries to Jose Altuve, Brian McCann and Lance McCullers Jr., just to name a few, and they had lost 14 of 25. Let’s just say they needed a game like they got: plenty of offense and Gerrit Cole going six strong innings with 12 strikeouts.

The Red Sox actually lost a game. I know, I can’t believe it either. They were leading 3-0 after a three-run third but the Phillies came back and scored seven unanswered in the fourth, sixth and seventh innings. The Sox added a run in the eighth but the Phillies kept them at bay and won 7-4.

Boston starter Nathan Eovaldi gave up three runs in five innings and reliever Drew Pomeranz gave up three runs on four hits in one inning of work. Neither team hit a home run and neither starter factored into the decision. Next up for the Phillies is a doubleheader against the Mets on Thursday.

Speaking of the Mets, they pounded Baltimore to the tune of a 15-6 at Camden Yards. The poor Orioles are 36-85 and still have the worst record in baseball by a hair over the Royals, who are making this a race to the bottom.

I already mentioned Houston’s offense and pitching but how about their defense? Well, take a look at this nifty play by Carlos Correa.

When everything’s going right, plays like that happen. It’s science. Or something.

A couple of series are finishing up with the Rays and Yankees playing the lone 1:05 p.m. game of the day, and the Nationals and Cardinals finishing their series with a 7:15 p.m. start.

The Mets and Phillies are playing a traditional doubleheader with game one starting at 4:05 p.m. and game two scheduled to start at 7:05 p.m but you know how these things go; game two won’t be starting on time.