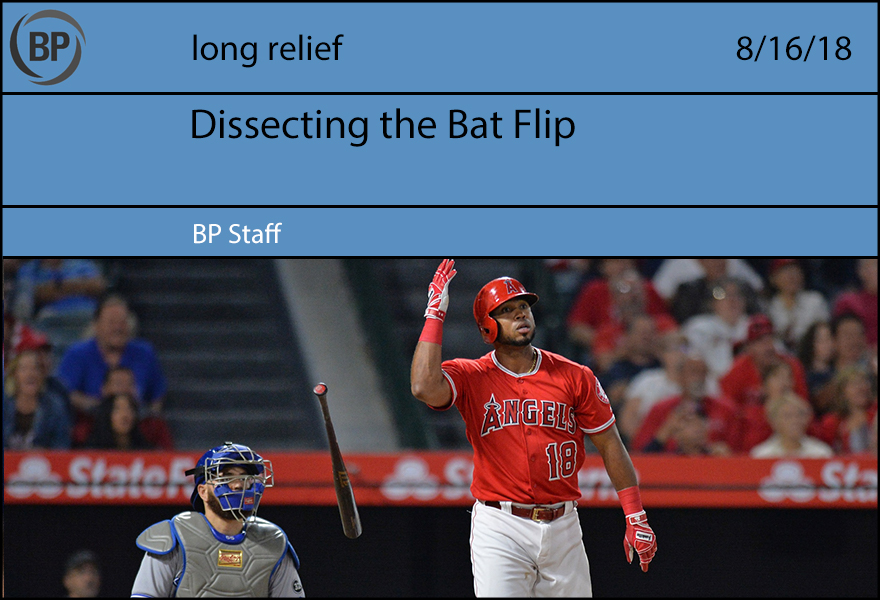 Patrick: Thank you all for convening on such short notice, but we have an important issue to attend to. It seems that one David Bote hit a golden ultimate game-winning walk-off supernatural superserious grand slam and then later apologized for flipping his bat on the play.

Before we judge Bote on his individual crimes, however, allow me to stress: it is long past time for us to lay down the jurisdiction of bat flips. We need clarity. What, exactly, is a bat flip? Does it require flipping, and if so, how many degrees of flip qualify? What is it that draws or repels us to the act? Can anything save us from the deadening repetition of thousands of games each season, the watering down of all joy, or is it already too late?

To begin: did David Bote, in fact, flip his bat?

Mary: In order to answer this, we must determine the parameters of a bat flip. Bote flips his bat approximately 180 degrees. Must it be a full 360 degree rotation in order to qualify?

Nathan: Any bat released upward, in defiance of nature and the unwritten rules, is a bat flip. The turn and tumble of the ash matters not.

Zack: I do think the bat needs to travel end-over-end—a bat that spins perpendicular to the ground is not a flip. Although I would reconsider this position if a player were to throw the bat in the air like a helicopter and make some ridiculous noises with their mouth.

Patrick: So if bat flips have nothing to do with flipping.. did we really create a two-word phrase and get half the words wrong?

Nathan: A jellyfish isn’t even a fish, Patrick.

Patrick: The least of their crimes.

Nathan: Unlike a bat flip, which is clearly the greatest sin a baseball player can commit, next to not advancing the runner of course.

Beth: Maybe the essential attribute of the flip lies in the intent. There is the “Bote,” pure joy intended, and the “Bautista,” intended to demonstrate that hell yeah Dominicans are cool. And then there’s the garden variety “Ouch-this-thing-stings-like-a-jellyfish-I-gotta-throw-it.” I love them all.

Justin: If anything, maintaining control of the bat and keeping it as you round the bases seems like a more unnerving event than surrendering it immediately. I guess my interest is in less of what a bat flip is, and more about how it came to be interpreted as a gesture of aggressive antagonism. A pitcher should be more concerned with where the ball is in that moment. Not the bat.

Nathan: Well, Justin, it all began when the puritans landed on the shores of Plymouth, MA.

Patrick: Back in the day when I played wiffleball with children semi-professionally (I was a summer camp counselor during grad school) the mantra I used with the kids was: it’s okay to celebrate your successes, just don’t celebrate your opponent’s failures. I understand that wiffleball, and baseball, and technically grad school, are all zero-sum games. But you look at Bote, and almost all bat-flippers, and they’re not making eye contact with the pitcher. They don’t remember the pitcher exists. Their mind is spiritually riding the back of that baseball as it soars toward the second deck. That seems perfectly fair and human.

Matt S: I don’t want to box ourselves in here. The flip is but one of the many ways one can release a bat. We should really be looking at the variety of bat drops, not just in lengthwise rotation but also in terms of release angle as well as the y- and z-rotations.

Kate: Matt, I must disagree. Much like witchcraft, a flip is all about intent. Bond’s bat drop is a flip, as is Canó’s. Both are a purposeful commending of the bat back to the element from whence it sprang: this weapon has served its purpose in battle and so is to be ritually buried.

Matt S: What if someone takes their bat and mimics putting it back in the sheath?

Kate: I can’t believe no one has done that yet. Game of Thrones really is fading from the zeitgeist.

Mary: If we’re going to assert that a bat flip encompasses more than a flip, then we’ve got to re-name it to reflect the fact that it’s an umbrella term.

Patrick: Ultimately, what we’re saying is that anything performative is a bat flip, including Fernando Rodney’s arrow. It’s not so much about showing up the opponent as any expression of individuality is an insult against our collective cultural standards. Is baseball the epitome of Homer’s Republic? Must we kill the artists to keep the youth safe from dreams?

Nathan: In seriousness isn’t part of the problem here that, regardless of whether we are pro batflip (as I expect everyone here is) or anti, we’re all arguing with some false construct of extremism? We can all agree that there is an actual line in which, as a competitor, you’d prefer your opponent not cross when celebrating their victory over you, yes?

Beth: When I hit a grand slam, I want to ride in a horse-drawn carriage with full military complement while fans jump and sing and the mayor issues proclamations and the pitcher stands on the mound screaming, “I’ll get you, my pretty!” On the other hand, I’d prefer that my opponent respect the game and trot gently around the bases, eyes averted, after carefully handing his bat to girl scouts.

Patrick: The line is probably somewhere before “hit the opponent with bat.” But honestly, the only division between showmanship and routine is tradition, right? The excuse most flippers give is lack of forethought – they were caught up in the emotion. But the only thing interesting about bat flips – the creativity – is exactly the kind of premeditation that makes them reviled. Only once the bat flip is truly killed like any other meme will it be okay, which I find sad.

Think of it this way. For someone new to baseball, the whole concept of taking twenty seconds and running around the bases at all is pretty bold. I love it – there’s nothing like it in sports – but who decided that the parade was okay? Or that Jeff Leonard could do it with one arm down, like some sort of robot psychopath, and nobody said anything? Were we all just scared of Jeff Leonard?

Beth: I am scared of anyone who can hit a major-league pitch as long as he is still holding a bat and making an adrenaline-soaked choice to celebrate. But I don’t think the division can be found between showmanship and routine because the routine is to argue about whether someone got shown up. The flip is a traditional cause for argument and argument is one of baseball’s great traditions.

Mary: Argument can be a great tradition in many cases, but arguing against bat flips is generally a sign of racism and disapproval of the diversification of the game, particularly if, as above, we expand “bat flip” to include any celebratory action, particularly on behalf of the batter. When everything in the world sucks, it’s essential to let giant dudes in pajamas demonstrate joy at every opportunity.

You need to be logged in to comment. Login or Subscribe
brewerstt
This is great. Sadly, some of the pointedly satirical postulates come pretty near the truth: any moment of natural emotion is likely to be taken as disrespect by someone on the other team, especially if they had nothing to do with the play.

But "When everything in the world sucks, it’s essential to let giant dudes in pajamas demonstrate joy at every opportunity" should be the national motto henceforth.
Reply to brewerstt