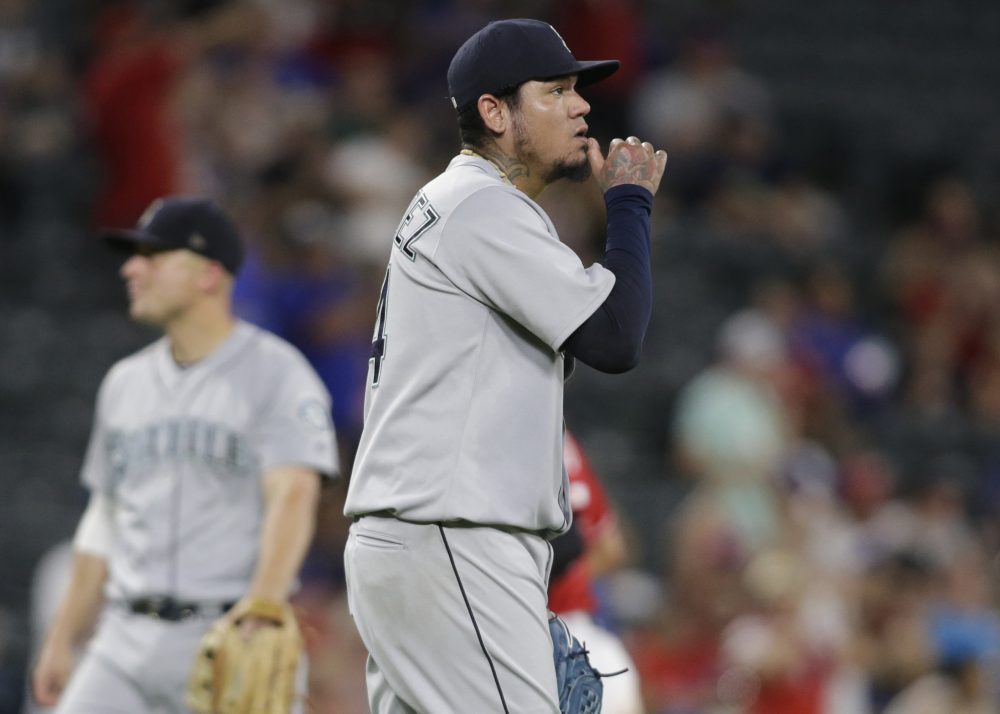 The left number is Felix Hernandez’s career appearances entering the Mariners’ divisional showdown with the Oakland Athletics. The right number, as you may have guessed, is his career starts.

Hernandez had started every game in which he appeared since debuting as a fresh-faced 19-year-old in 2005. Seattle manager Scott Servais said this past week that Hernandez, who is sporting the worst strikeout rate of his career; the second-worst walk rate; already has allowed the second-most homers in a single season in his career; and has a grotesque 5.73 ERA, would move to the bullpen.

He did just that in Seattle’s 3-2 loss, although it wasn’t exactly because of a scenario you might’ve envisioned.

The Mariners are currently on the outside looking in as they try to snap the longest active playoff drought in baseball. But they also seemed to avoid the worst in terms of James Paxton’s fate.

Paxton will miss at least one start, but Servais says it could have been much worse. Bruised forearm. Felix logical replacement.

Hernandez may be destined for more starts in the future, and wound up with a starter’s workload in defeat, allowing two earned runs in 5 ⅔ innings. The A’s won, led by the newly-acquired Mike Fiers, and homers from Marcus Semien and Jed Lowrie, hanging on to pull within one game of the Astros for the AL West lead.

Quick Hits From Tuesday
If the Brewers are going to overtake the Cubs in the NL Central, having more performances like their afternoon tilt at Wrigley would be a good start.

The Brewers jumped all over Jose Quintana early as the Chicago left-hander, for whom the Cubs sent Eloy Jimenez to the South Side, put up his third stinker in his past four starts. Lorenzo Cain took the second pitch of the game out and Ryan Braun followed with a two-run shot three batters later.

The offensive onslaught was a welcome sign for a team that was 3-8 against their division rivals entering the day, but they could’ve stopped after the Cain blast, as Jhoulys Chacin put together his finest start of the season at the most opportune time. He struck out a season-high 10 and allowed just three hits and two walks in seven innings of work.

The Indians winning the AL Central has never really been in doubt, but the Tribe have somehow been about as disappointing as a team 17 games over .500 can be when you consider they get to play the Twins, Tigers, Royals, and White Sox a combined 76 times. They also entered the day with the sixth-best record in the league despite a double-digit division lead.

Losing Trevor Bauer for an undetermined amount of time to a stress fracture in his right fibula is no small thing. Despite the Indians’ underwhelming season, the team is built for October with a rotation of him, Corey Kluber, Carlos Carrasco and Mike Clevinger that would be tough to match in a playoff series.

A shutout win against the last-place Reds is not exactly a large feat, but the Indians have now won four straight and 11 of 14 against exactly the type of teams they should be beating. The rest of the season for them is more about prepping for the playoffs and inevitable matchups against such behemoths as the Red Sox, Yankees, or whoever comes out of the West. Cleveland staying healthy and getting Bauer back to add to that scary rotation is more important than any result right now.

Vladimir Guerrero Jr. and Eloy Jimenez are currently playing on opposite sides of a series between the Buffalo Bisons and Charlotte Knights in the International League — the most recent obvious matchup in recent memory of two players very obviously due for promotion playing against competition inferior to their skillsets.

While Blue Jays and White Sox fans clamor for the prospect superstars to join their major league rosters, Ronald Acuña Jr. is showing exactly why he was the “Next Big Thing” before they became “Next Big Things.”

Acuña is playing right now like the guy who was the consensus No. 1 prospect in baseball entering the season. He has eight home runs in his past eight games, including the two in a 10-6 win. The Braves now lead the NL East by two games. Acuna won’t turn 21 until December.

We’re living in a world where a player who spent six years trying to make the majors and has fewer than 100 career plate appearances has to apologize for showing excitement after hitting an Ultimate Grand Slam in the heat of a playoff race. That’s pretty ridiculous, but Nick Hundley supposedly getting mad at Yasiel Puig for getting mad at himself is some next level stuff. I suppose there’s some “showing up the pitcher” type of argument there somewhere, but come on.

Oh, and the Giants won 2-1 thanks to an RBI single by Alen Hanson off Kenta Maeda in the ninth.

I mentioned earlier that the A’s are now only one back of the Astros in the AL West. That’s because Houston couldn’t do anything to help Justin Verlander despite the ace’s 11 strikeouts in six innings.

German Marquez stifled one of the best offenses in baseball, and while the Astros suddenly find themselves fighting for the division crown, the Rockies are sticking around in the crowded NL West, one game behind Arizona despite a negative run differential.

The good news for the Nationals is that they did not suffer a walk-off defeat against the Cardinals. The bad news is everything else.

John Gant is no Ron Gant… at least not yet. But he shut down the Nationals on the mound and provided some run support for himself with a two-run homer. The Nationals are back down to .500 and time for them to overtake Philadelphia and Atlanta is running thin.

Defensive Play of the Day
I’m having writer’s remorse about the lead of this article as I didn’t say enough about the Oakland A’s, who as I’ve mentioned a few times are ONE GAME behind the Houston Astros, which seemed ridiculous just a month or two ago. The A’s surge has been led by a good number of folks, one of them being Matt Chapman, who does stuff like this on a regular basis.

What to Watch For Wednesday
If you’ve got the day off and can stomach watching a few bad teams play an afternoon tilt, check out Carlos Rodon, who’s starting to pitch like a front-line starter, and the White Sox take on Jordan Zimmermann and the Tigers. If good teams are more your thing, the Brewers and Cubs continue their series with Junior Guerra facing Kyle Hendricks. A little later in the afternoon, we’ll see the Mariners and Athletics continue their series with Mike Leake against Brett Anderson. At night, the Red Sox will see if they can spot Nathan Eovaldi 19 runs of support again as they take on Vince Velasquez and the Phillies. Let’s see if Acuña can hit a lead-off homer again as Kevin Gausman and the Braves face Jose Urena and the Marlins. Houston will send Gerrit Cole to the mound to try to snap their skid against Tyler Anderson and the Rockies. And finally, the Dodgers and Giants will attempt to not fight as Derek Holland takes the mound against Hyun-Jin Ryu.